There is anecdotal evidence of sightings of upper atmosphere lightning, or Transient Luminous Events (TLEs), at least as far back as the 1730s, while proper visual reports of sightings go back to 1886. It was confirmed, photographically, on July 6, 1989, by scientists of the University of Minnesota. Using low light digital cameras, the upper atmosphere is now routinely detected and recorded at increasingly high resolutions.

Many types of Transient Luminous Events

There are many types of Transient Luminous Events. The most common and well known are sprites, but there is a number of other types too: 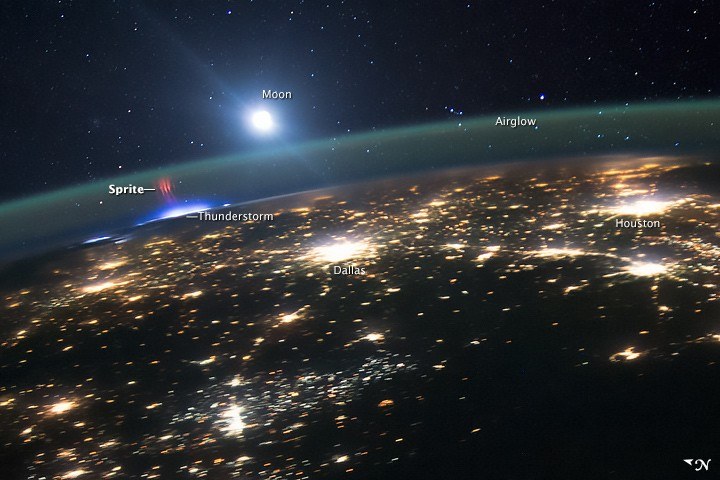 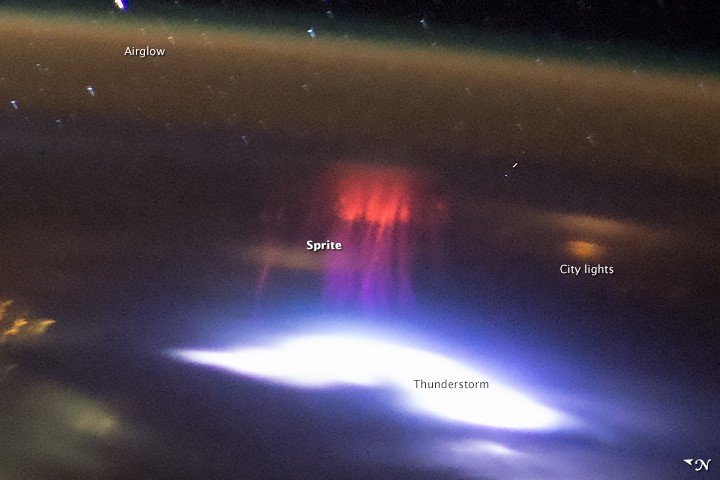 Sprite photographed from the International Space Station above a thunderstorm over NW Mexico on August 10, 2015. Photo: NASA Earth Observatory.

Seeing Transient Luminous Events – with your own eyes

Often the parent storm is so far that it is below the horizon, so only sprites appear. As a rule of thumb, the sky is dark enough to see sprites if you can clearly and distinctly see the Milky Way close to the horizon, otherwise, your chances of spotting a sprite are low. The structure can be seen with the brightest sprites.

Remember that sprites appear high above their parent storms: they can reach halfway up (45°) in the sky if the parent storm is 50-100 km away, and will occur low near the horizon for thunderstorms hundreds of kilometers away. Blue jets and blue starters can also be seen sometimes, generally when the storm is closer and insight (due to their lower peak altitudes).

Visual sightings of blue jets and starters are very rare.

Photographing Transient Luminous Events – with your own camera

Got a DSLR or mirrorless camera? You can try to capture sprites on photos. Again, you will need dark skies. Set your camera on a tripod, set the ISO to high values (3200 or more), and exposures several seconds long. Use a ‘fast’ lens, f/1.8 or f/1.4 (or faster if possible) – a 50 mm lens will do fine. Be prepared to take many photos before capturing a sprite!