A recent research study published in the December issue of Journal of Climate finds that severe thunderstorm potential is four times bigger across the United States with stronger both CAPE and wind shear as compared to Europe. The efficiency of convective initiation is generally higher over Europe, but once a thunderstorm forms, a probability that it will become severe is much greater over the United States. 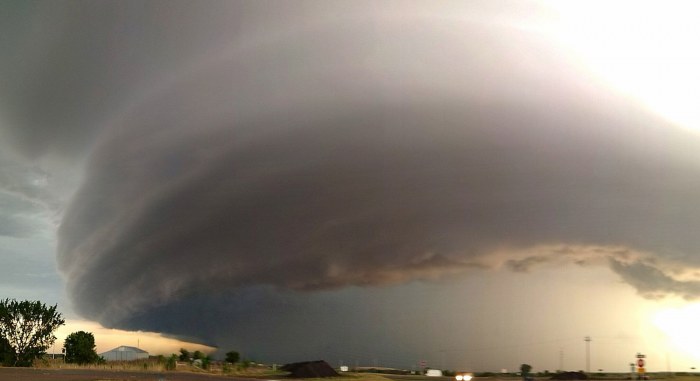 Image above: Thanks to stronger instability and vertical wind shear storms across the United States are typically better organized and more capable of producing severe weather as compared to their European counterparts (storm on the afternoon of 13 May 2020 in W Oklahoma, photography: Mateusz Taszarek).

Part 1 focuses primarily on a baseline climatology of severe weather reports and lightning data. As results suggest, each year approximately 75–200 hours of thunderstorms occur over the southwestern, central, and eastern United States, with a peak over Florida (200–250 hours per year) and summer as the most active period.

Although severe wind reports are also the most frequent during summer, tornadoes and large hail pose the biggest threat across southern and central portions of the Great Plains during spring. In winter and early spring, peak convective activity shifts towards the southeastern United States. 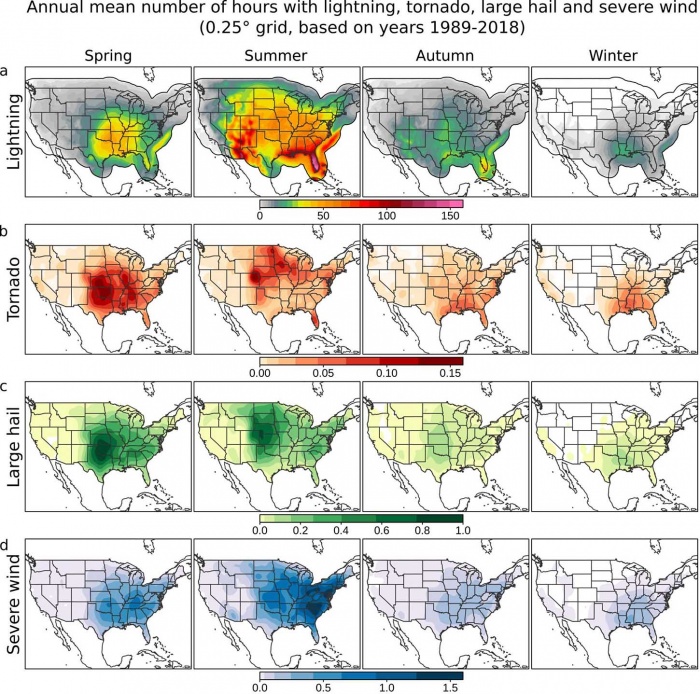 The activity over the majority of Europe is smaller and ranges from 15 to 100 thunderstorm hours per year, with peaks over Italy and mountain zones such as the Pyrenees, Alps, Carpathians, and Dinaric Alps (100–150 hours per year). The highest convective activity over continental Europe occurs during summer and over the Mediterranean during autumn.

Severe weather reports indicate the most frequent tornadoes, large hail, and severe wind reports during summer over central Europe. During autumn a peak in tornado activity shifts towards the Mediterranean area – study finds. 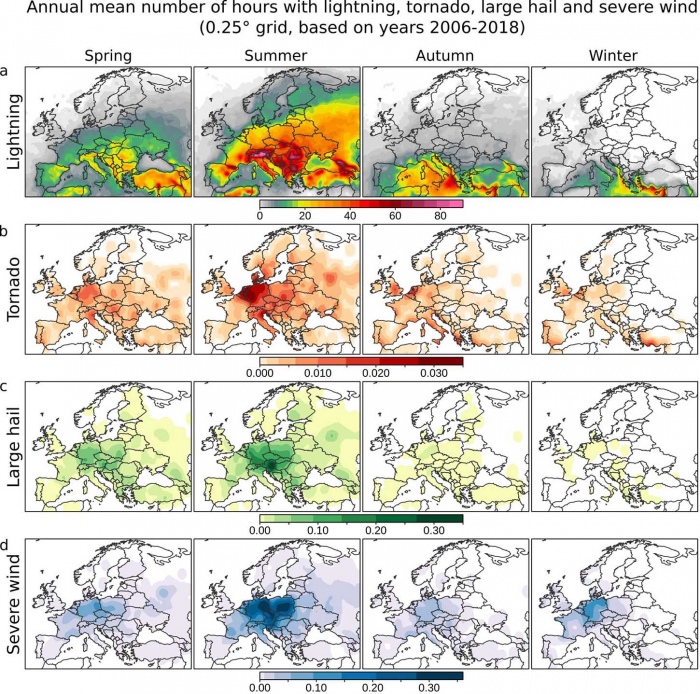 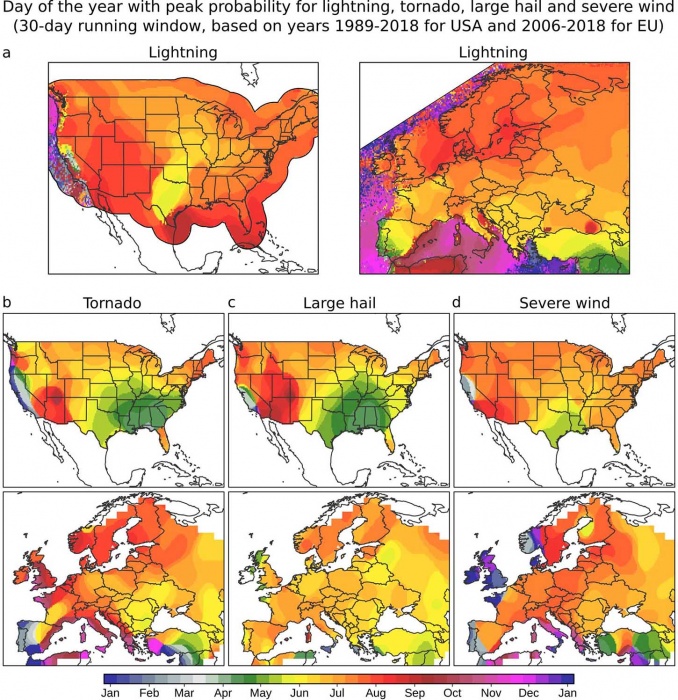 However, European severe weather reports feature spatial and temporal biases in the reporting efficiency with a considerably higher number of reports available for Central Europe. A research study led by Dr. Taszarek evaluate this issue by comparing hours with detected lightning with hours of a reported tornado, large hail, and severe wind events. Resulting fractions provide guidance on which parts of Europe experience the largest underestimation in severe weather reporting.

These maps show also an interesting pattern with locally enhanced fractions of severe weather reports in the areas of high population density, especially big city agglomerations as evident across the United States, and also Europe (e.g. Moscow or Berlin area). 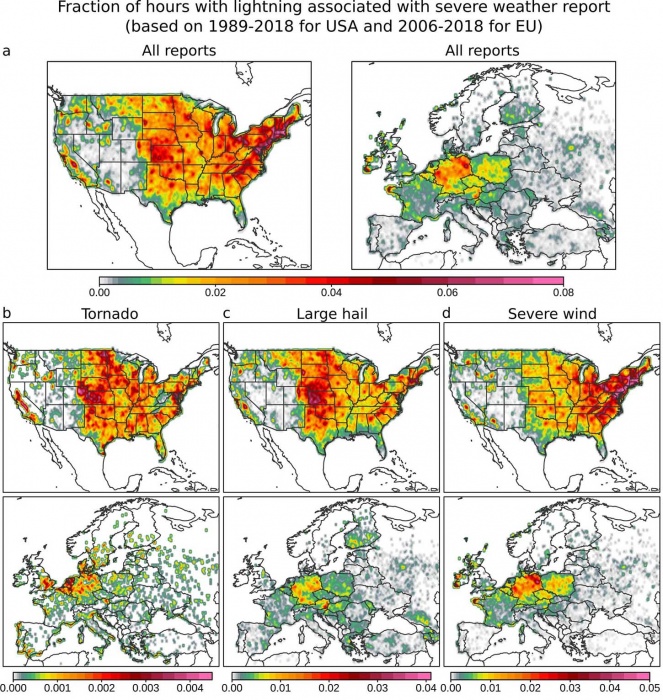 Another comparison between Europe and the United States considering the frequency of the most extreme high-end convective events also show considerable differences between these two regions. The United States has generally much higher frequency of extreme events (high flash rates, violent tornadoes, gigantic hail, damaging winds) across Southeast, southern Great Plains, and Midwest.

Conversely, in Europe, extreme events over the last 40 years have been reported primarily in the corridor from France up to western Russia. The threat over Europe should not be underestimated, as the majority of severe storms occur over densely populated areas in the opposition to the Great Plains of the United States. 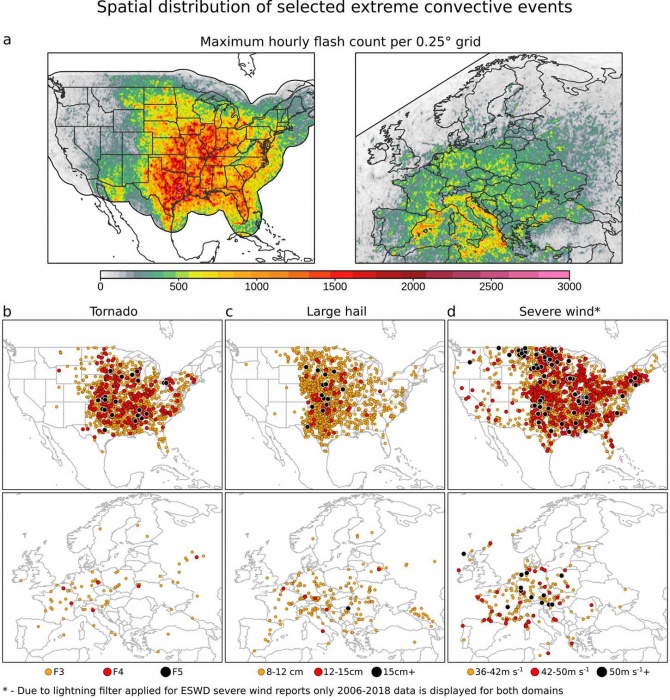 In addition, the authors also concluded that convective hazards occur typically in the late afternoon, with the exception of the Midwest and Great Plains, where mesoscale convective systems shift peak lightning threat to the night. The severe wind threat is typically delayed by 1–2 hours compared to hail and tornadoes. The fraction of nocturnal lightning over land ranges generally from 15% to 30% with the lowest values observed over Florida and mountain areas (∼10%). 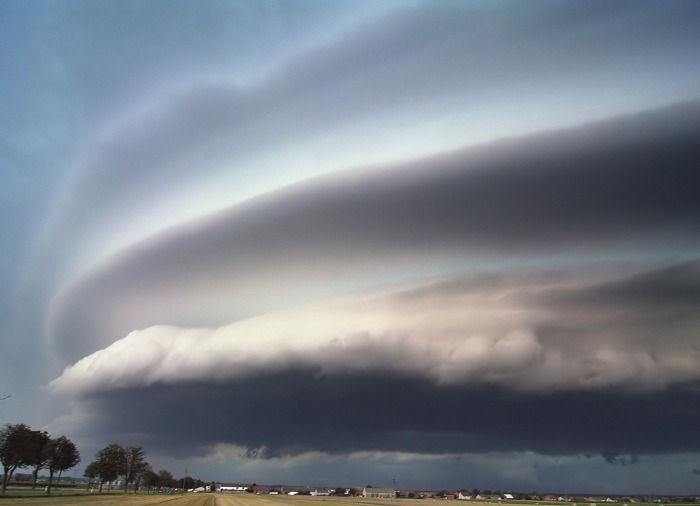 Although extreme storm events are less frequent in Europe compared to the United States, they typically occur over densely populated areas, and therefore their risk should not be underestimated (derecho on the afternoon of 11 Aug 2017 in SW Poland, photography: Mateusz Taszarek).

As reliable estimates regarding severe storm climatologies are difficult to evaluate with observations, authors focused Part 2 of their study on ERA5 environments associated with over 800 000 reports of large hail, severe wind, and tornadoes. Then, they combined these environments with lightning data and assessed how often specific conditions occur across Europe and the United States.

Results regarding convective parameters unsurprisingly yielded that almost each severe weather category across the United States is characterized by higher low-level moisture, convective available potential energy (CAPE), and vertical wind shear compared to European environments. A composite parameter of CAPE and vertical wind shear (WMAXSHEAR) turned out to be an excellent predictor in assessing thunderstorm severity, especially tornadoes and large hail. Interestingly, CAPE in the 0-3km layer was found to be typically stronger in Europe. 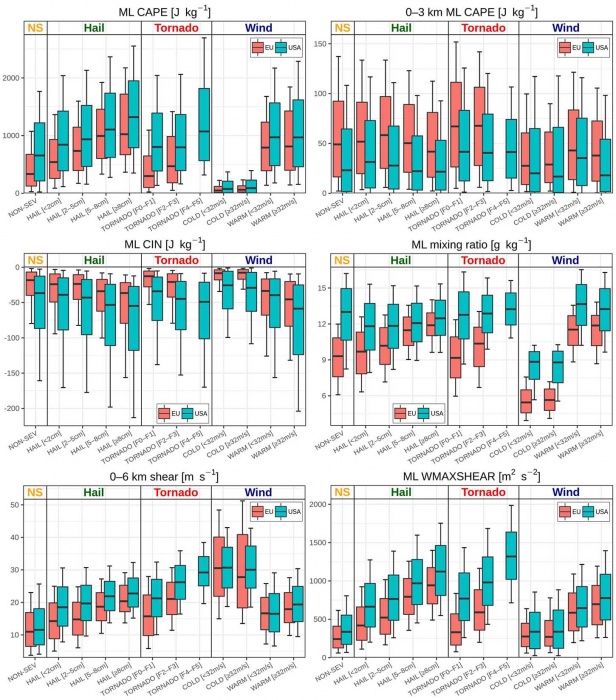 However, an absolute number of favorable environments is still much higher over the United States, especially considering high CAPE and high wind shear situations, which Europe is missing. 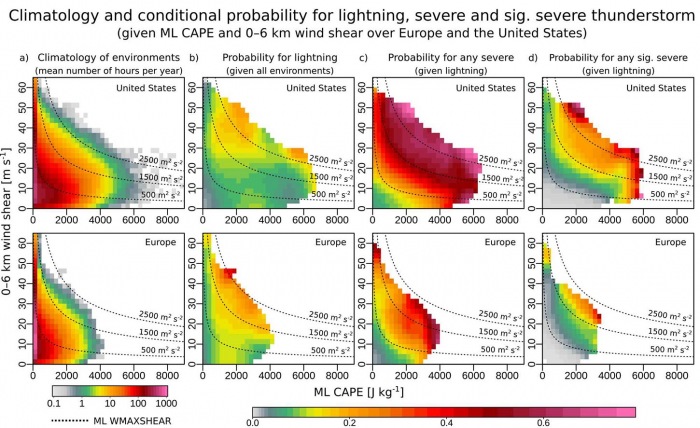 When focusing on the spatial distribution of convective environments the highest CAPE in the United States is found along the Great Plains and the Gulf of Mexico, while vertical wind shear increases toward the north. A combination of both (WMAXSHEAR) really nicely highlights the area in the United States where storms are typically the most severe.

In Europe, both CAPE, wind shear, and WMAXSHEAR are considerably smaller and show rather even spatial severe thunderstorm potential throughout Europe with an exception of Scandinavia and the British Isles. Wind shear is the highest over the western part while CAPE peaks typically over southern, central, and eastern Europe. 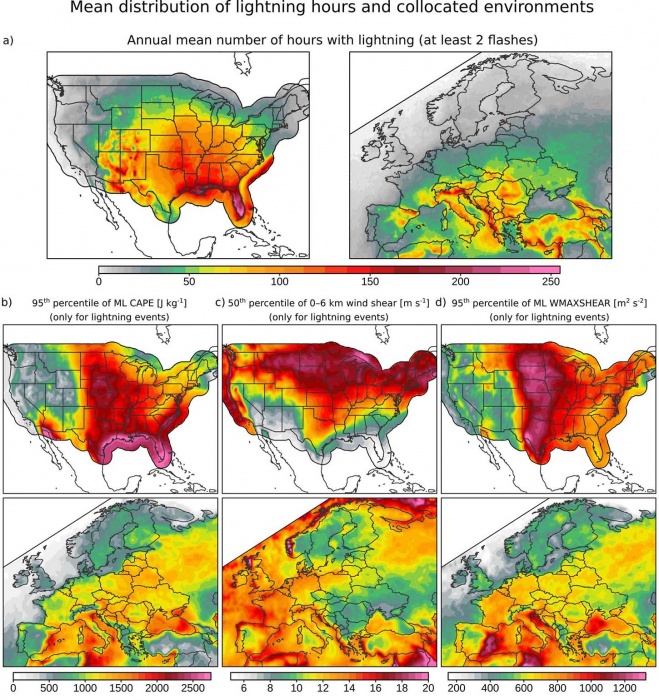 When lightning detection is considered in environmental analysis, it turns out that the hot spot for severe thunderstorms in terms of their frequency is the area of southern Great Plains and portions of the Midwest in the United States, and south in Europe (especially northern Italy).

Authors conclude that from the climatological perspective severe thunderstorm environments (hours) are around 3–4 times more frequent over the United States compared to Europe. However, storms in Europe are not only less frequent, but they also have a lower potential for producing severe weather as it is revealed in longer return periods of specific hazards.

Authors also add that prime environments for severe thunderstorms over the United States are between April and June, typically from 1200 to 2200 CST, while across Europe favorable environments are observed from June to August, usually between 1400 and 2100 UTC.