With supercells being reported left and right – what are the most typical and telltale signs a storm may be a supercell?

This leads to the development of distinct visual features in supercells. While there is much variation in shape, size, and appearance, supercells share a number of distinctive features. Knowing these may help you spot a supercell in the field. Here are 10 visual signs a storm may be a supercell. 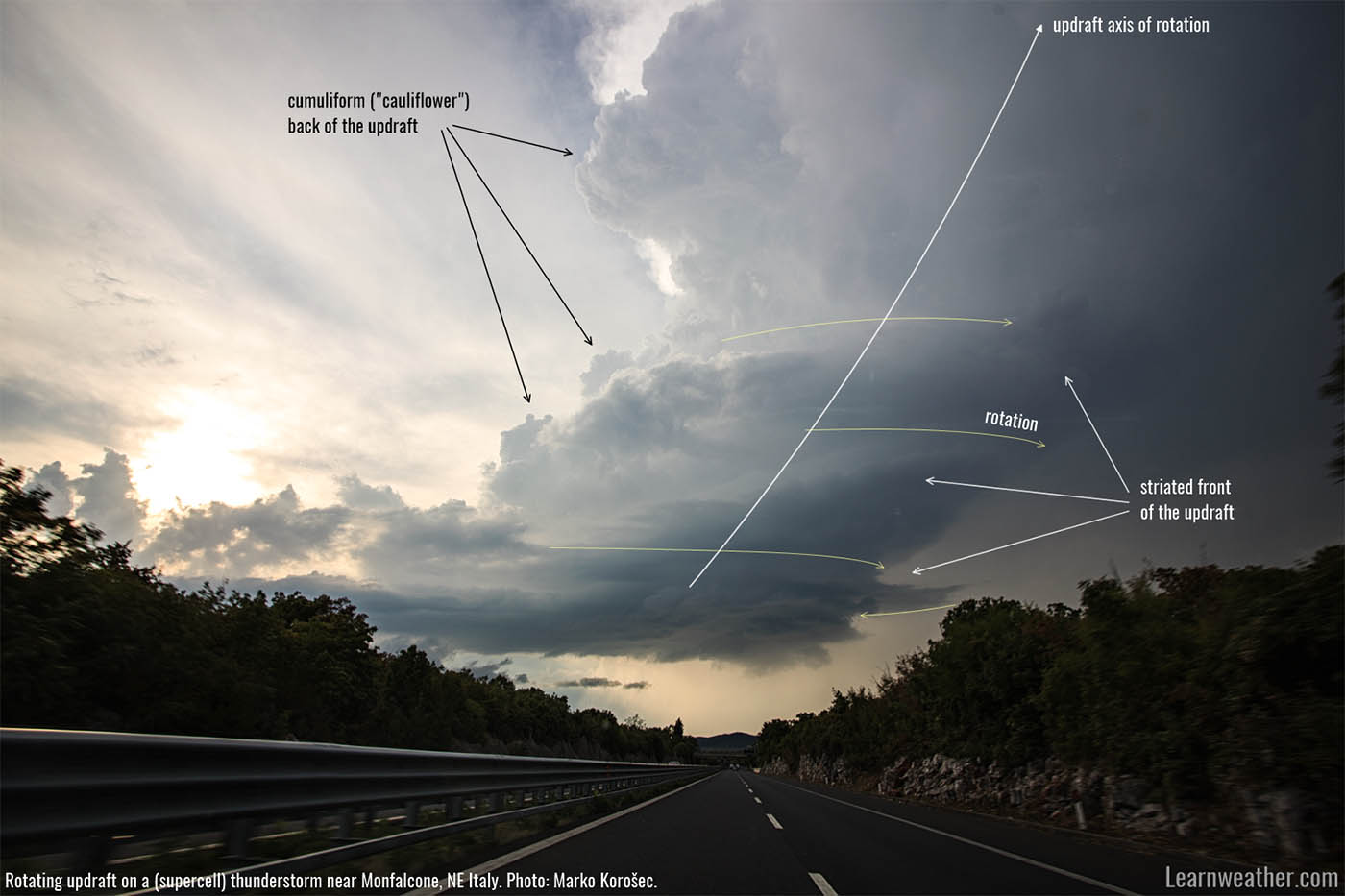 Supercells form in strongly sheared environments. As the wind increases with altitude, it tilts the supercell’s updraft producing a typical slanted appearance.

Supercells develop two distinct downdrafts, that are dynamically distinct. The Forward Flank Downdraft or FFD is is a region of descending air located on the forward part of a supercell thunderstorm. It is composed of cold and moist air, dragged down by entrainment of precipitation (or water loading) and negative buoyancy due to evaporation cooling. The FFD produces both rain and hail.

The Rear Flank Downdraft or RFD is a region of descending air located on the rear trailing part of a supercell thunderstorm. The RFD can form due to evaporation cooling and consequent negative buoyancy (i.e. thermodynamically) or due to the storm’s updraft blocking the mid-level airflow (i.e. dynamically). In dynamic origin, the RFD forms as the rotating updraft obstruct mid-level flow on the upwind side of the storm.

Air on the backside of the supercell begins to sink, forming the RFD. At the surface, the RFD is cooler than the inflow but typically warmer than FFD. The RFD is forced downwards from mid-levels, undergoing compressional (adiabatic) heating. The FFD on the other hand descends due to precipitation loading (entrainment) and evaporation cooling.

In other words, the RFD is pushed down and warms on its way down. In contrast, the FFD is dragged down by precipitation and additional negative buoyancy due to evaporation cooling. Varying amounts of rainfall can be entrained from the FFD into the RFD by the rotation of the mesocyclone. 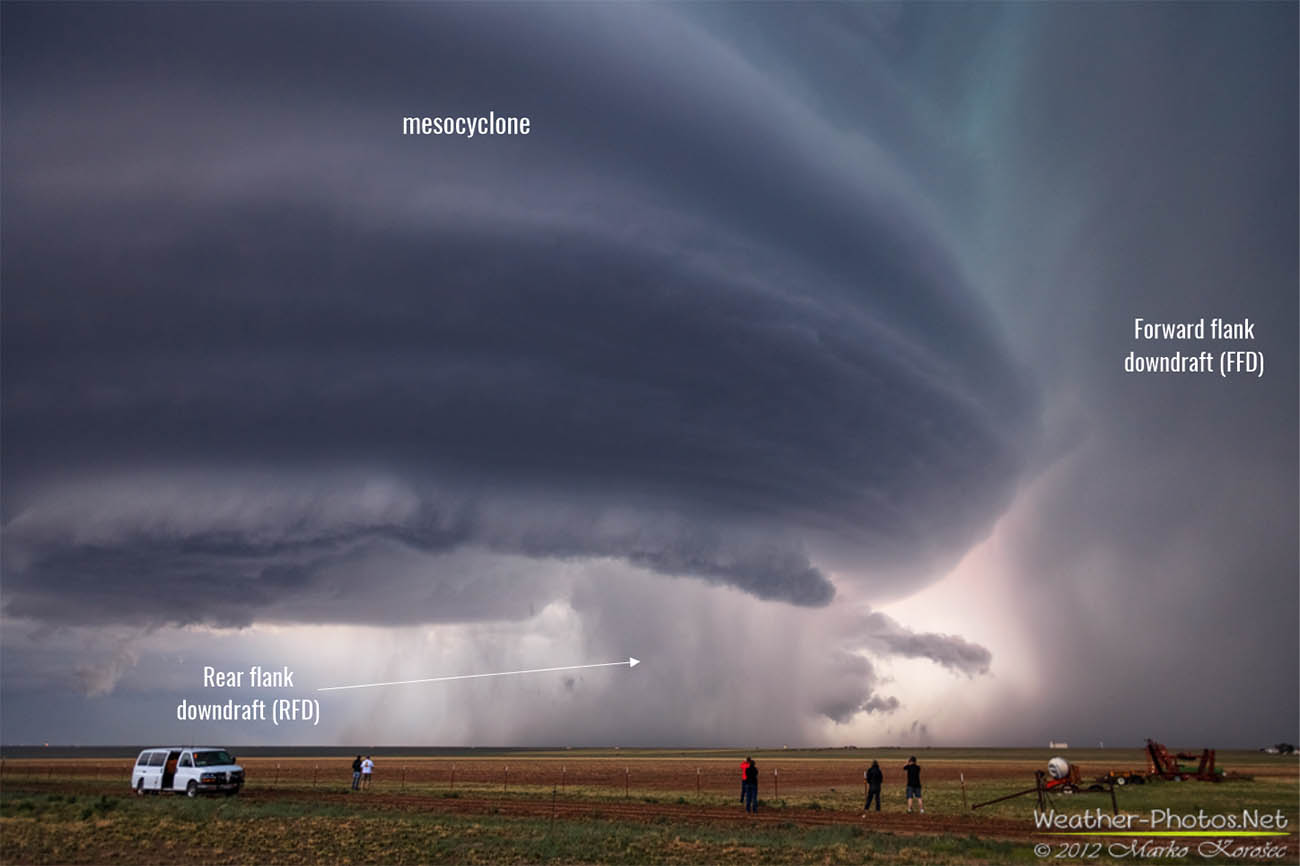 The wall cloud (also murus or pedestal cloud) is a pronounced lowering in a supercell’s rain-free base. It forms as rain-cooled air from both the RFD and FFD is pulled upward (entrained) with the warmer inflow air into the updraft.

As the rain-cooled air is cooler and very humid, the mixed rising air condenses quicker and therefore lower (at lower altitude) than the air in pure inflow. Wall clouds can be rotating or non-rotating, depending on the low-level winds and dynamics of the thunderstorm. Forming wall clouds can present different appearances.

The inflow tail (sometimes also called a tail cloud) is a tail-like extension of the wall cloud in the direction of the inflow. It forms as the warm, moist inflow air comes into contact with the cooler air in the forward flank downdraft (FFD) being entrained into the inflow.

Inflow tails come in many shapes and sizes, from short stubby extensions of the wall cloud to a long cloud band several kilometers long. 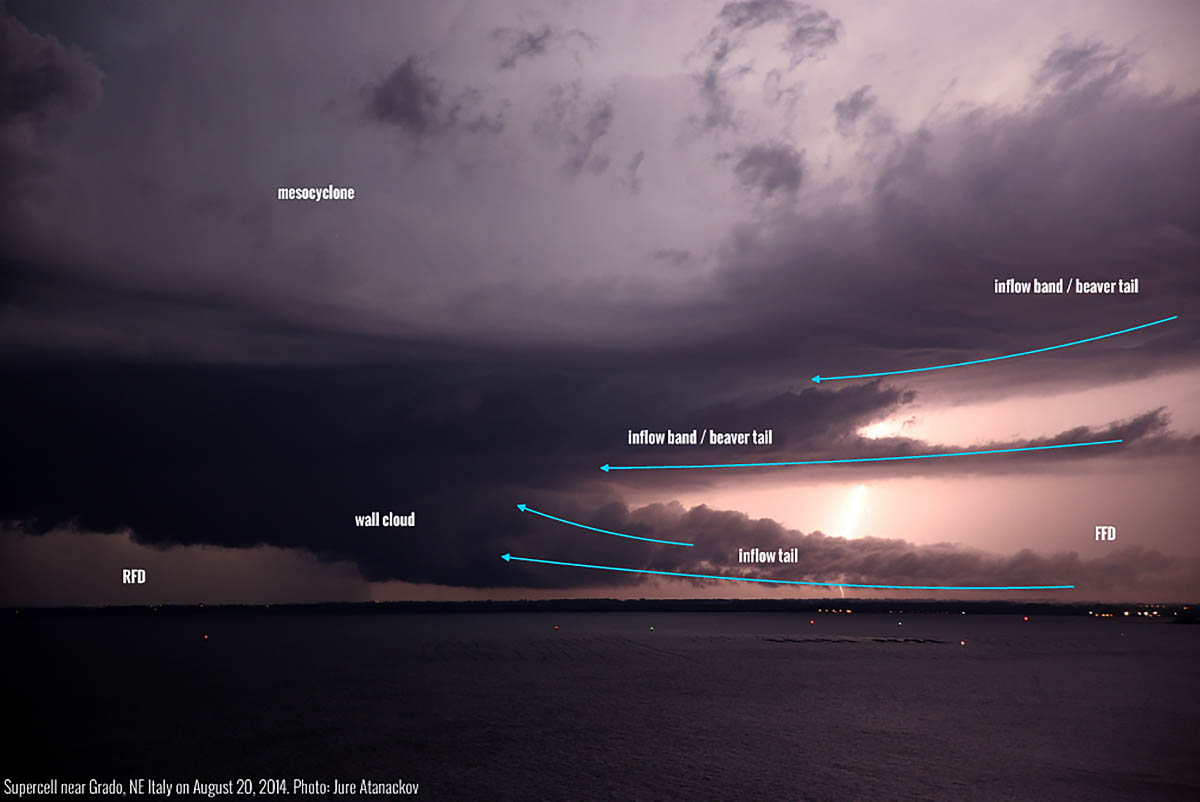 Supercells often display mid-level convergent inflow bands. There may be one dominant inflow band or multiple smaller ones. They are known in storm chaser jargon also as feeder bands. 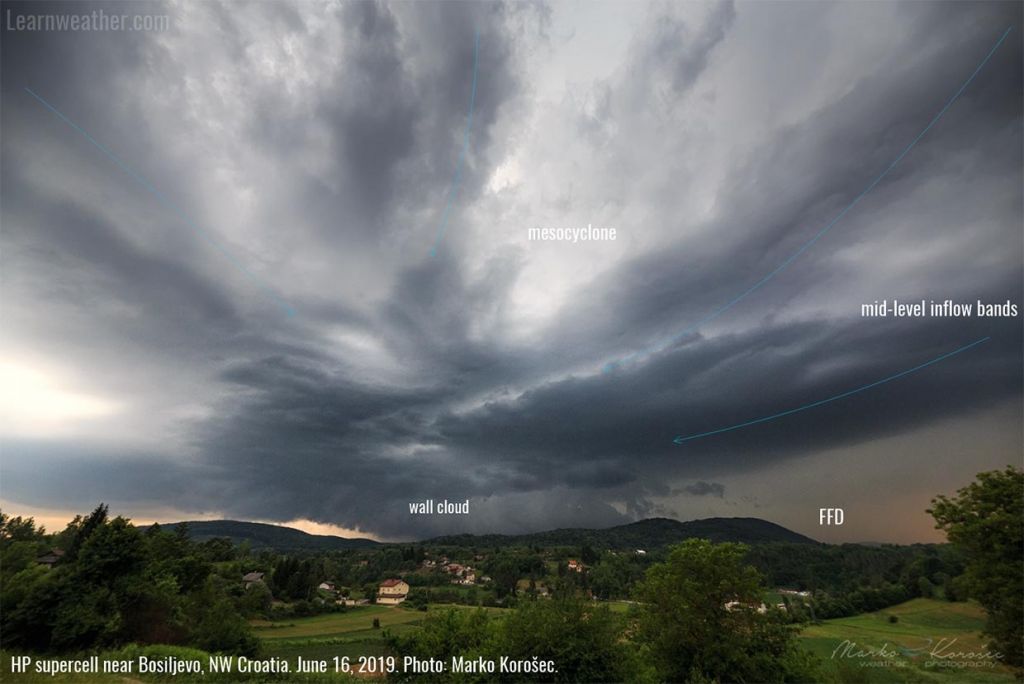 Supercells, particularly isolated ones, often develop distinct striations in the lower part of the mesocyclone. Striations appear as more or less distinct linear features, which can in the most extreme cases take on the appearance of stacked plates. Indeed, stacked plates are jargon storm chasers use to describe a strongly striated mesocyclone. 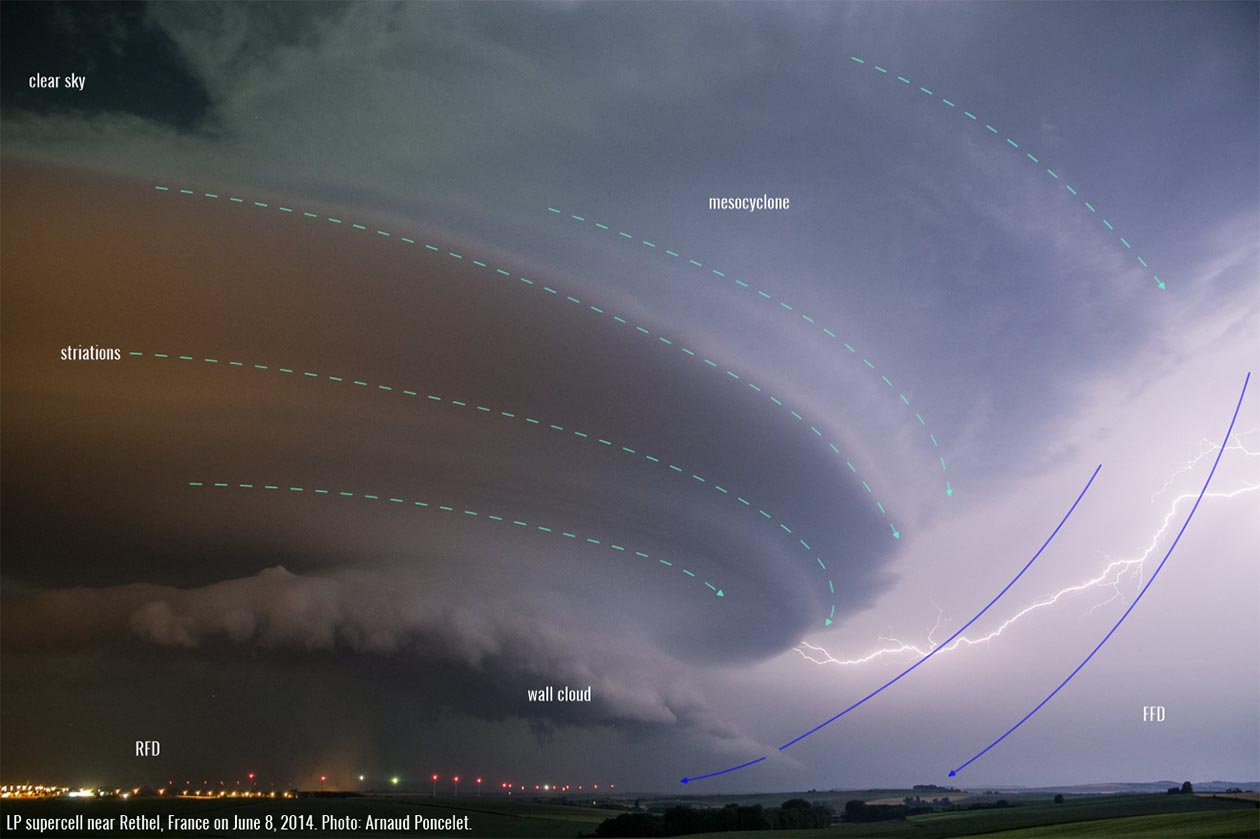 Note, however, that squall lines can also produce multi-layered shelf clouds, which also have a striated appearance.

The RFD cut or clear slot in storm chaser jargon is one of the more distinctive features of a well-developed supercell. The RFD cut can be rain-free and visually clear, partly obscured by rain or completely obscured by heavy rain. The RFD cut forms as the RFD descends and wraps around the trailing part of the updraft. 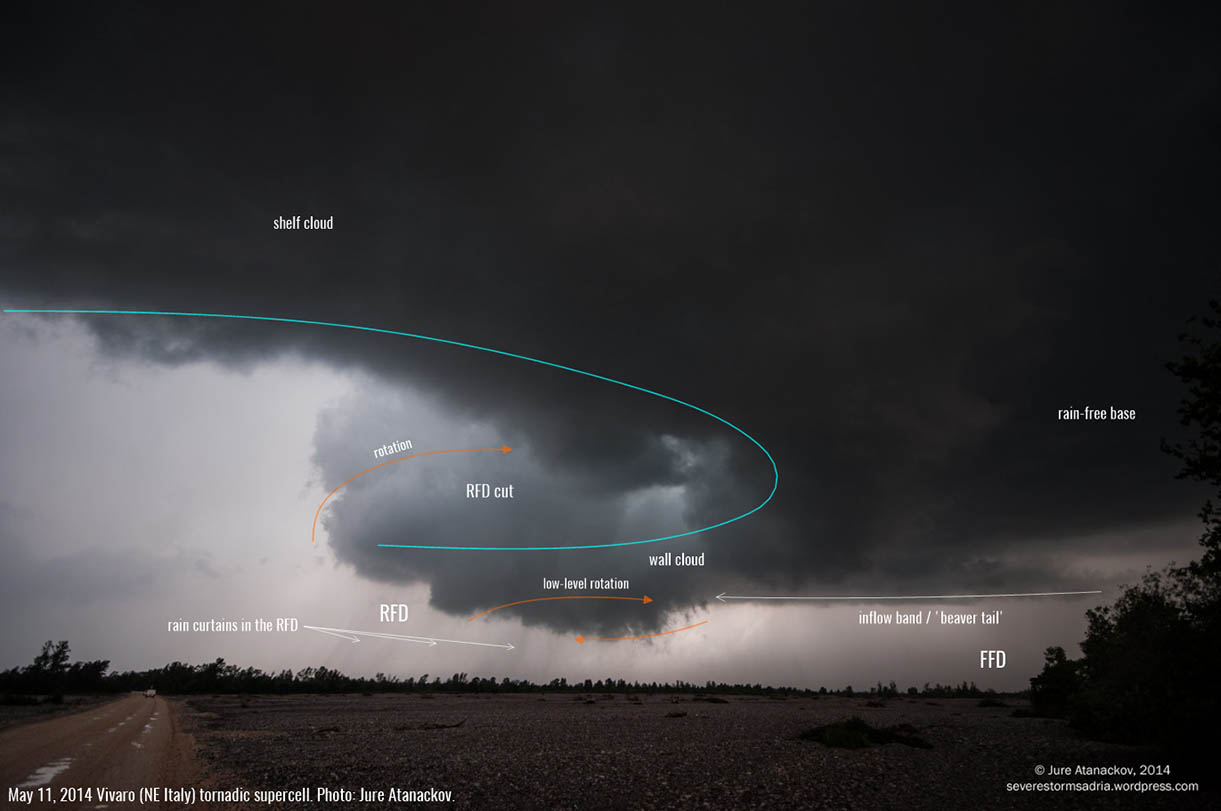 As the air in the RFD descends it cuts a clear notch into the storm’s rain-free base. This is a visually very distinct feature. It sculpts the rain-free base into a recognizable U-shape or horseshoe shape.

The vault is a visually clear region between the tilted updraft and the forward flank (FFD). The vault is not developed on all supercells, and depends on the tilt of the updraft and offset of FFD precipitation. 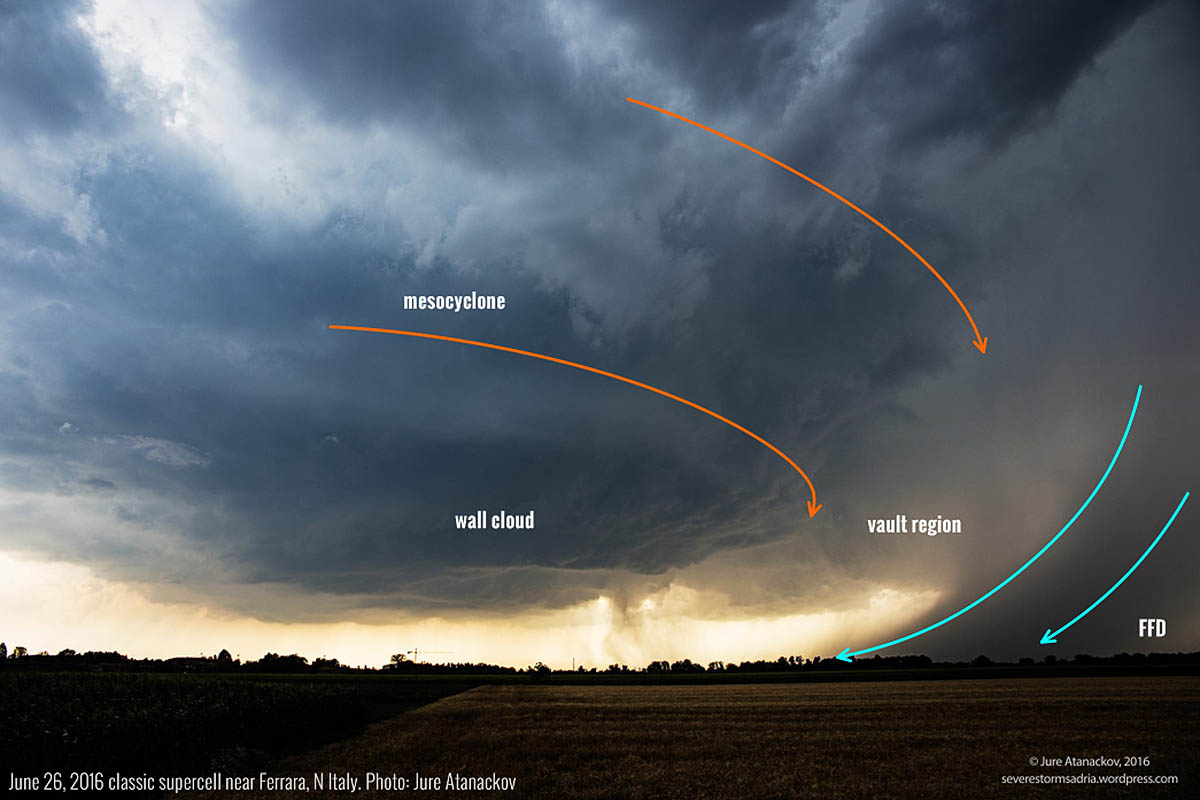 Very large hail, over 5 cm in diameter, is most typically produced by supercells. 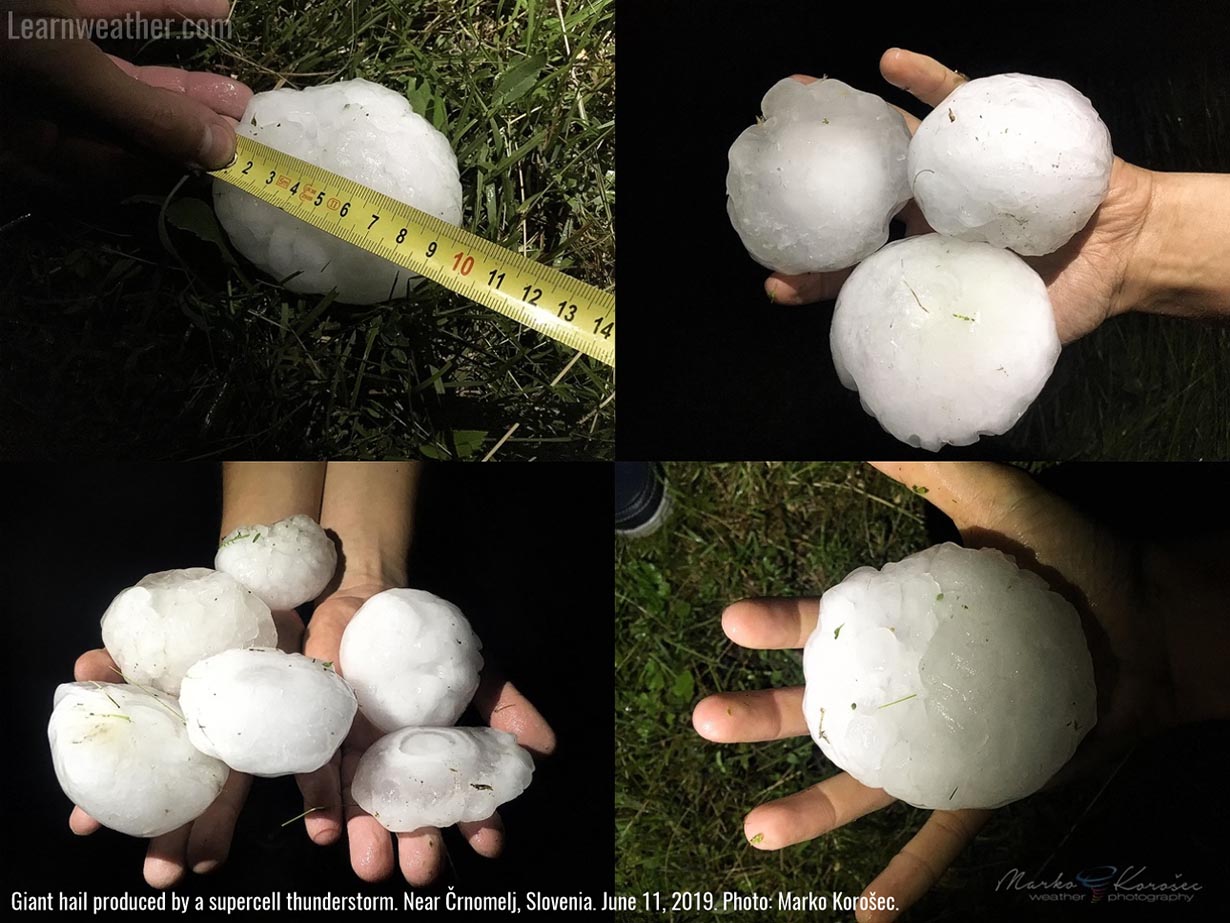 Supercells often develop a visual appearance that is indicative of rotation. This may be due to stacked plates mesocyclone, mid-level inflow banding, updraft appearance, or other visual features – supercells frequently indicate rotation by their look. 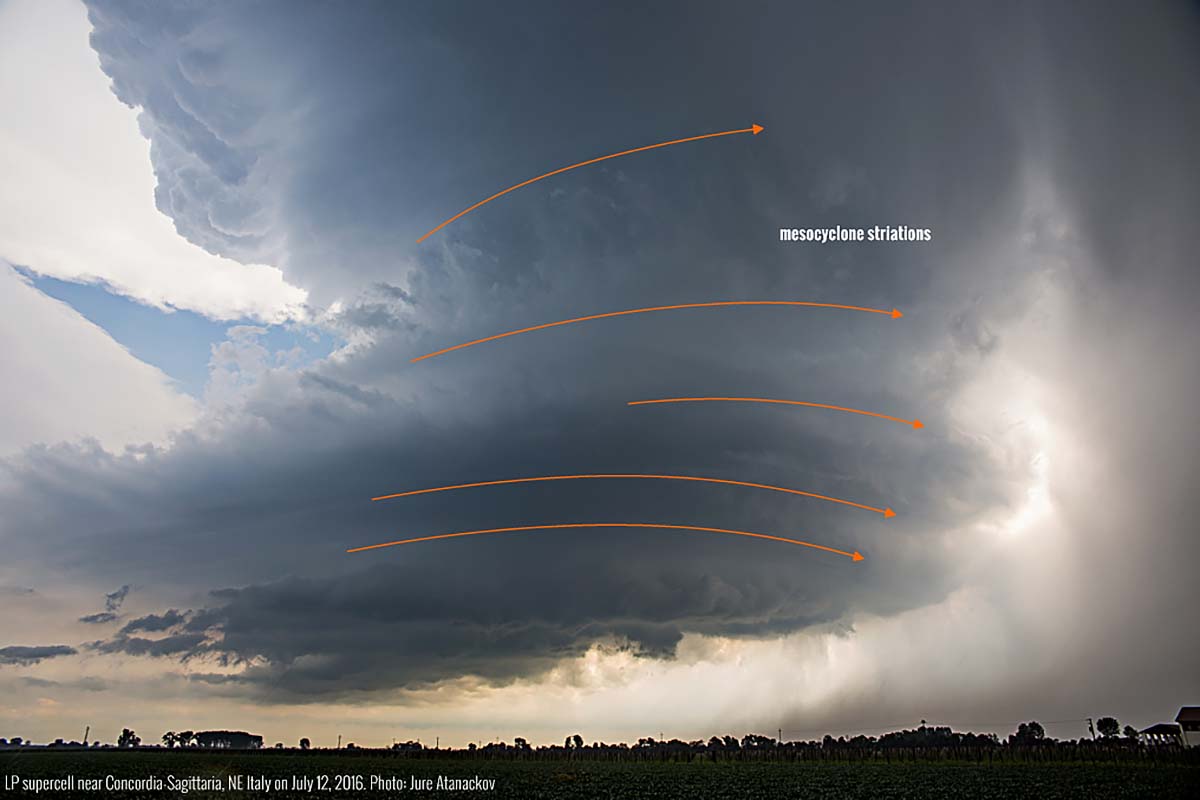 It often pays off to be able to discern supercell characteristics in the field. Even relatively small and seemingly non-severe supercells can easily produce large or even very large (5+ cm) hail. You may be able to avoid driving into a severe hailstorm or torrential rainfall. Or, it may help you appreciate the nature of the storm from a safe distance. 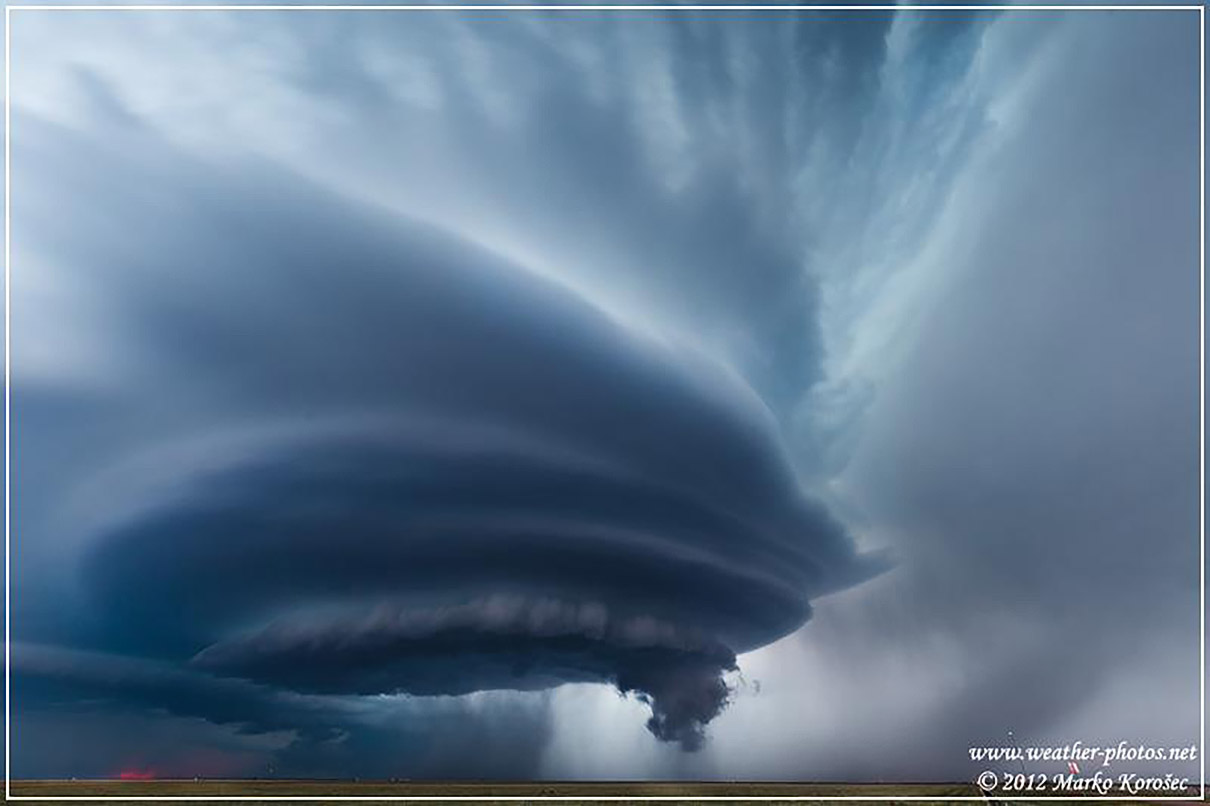