Autumn is storm season in the Mediterranean: the Mediterranean is still warm with sea surface temperatures in 22-27 °C range, while deep troughs and cutoff lows push deeper into the region. The favourable overlap of strong instability and sheared environment is highly conductive for tornadoes. 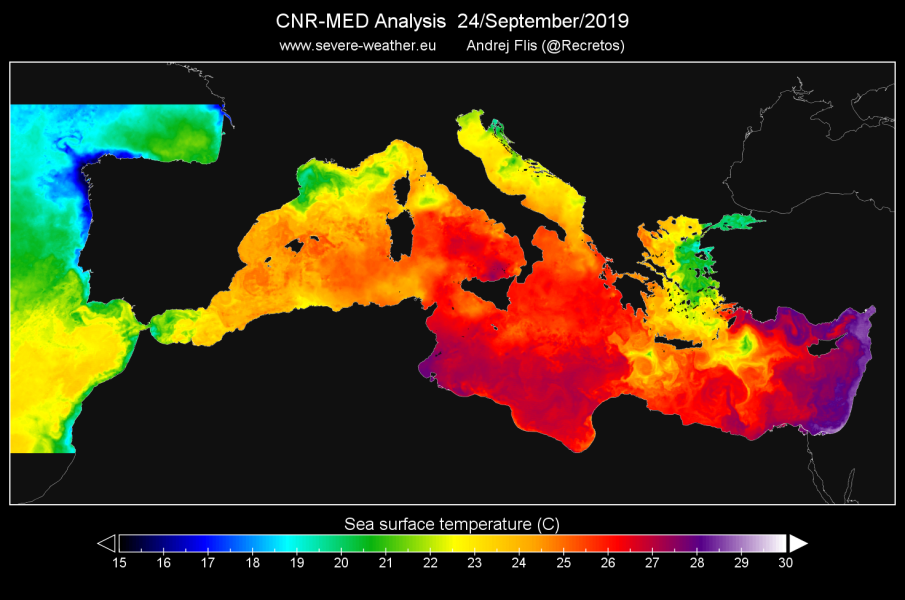 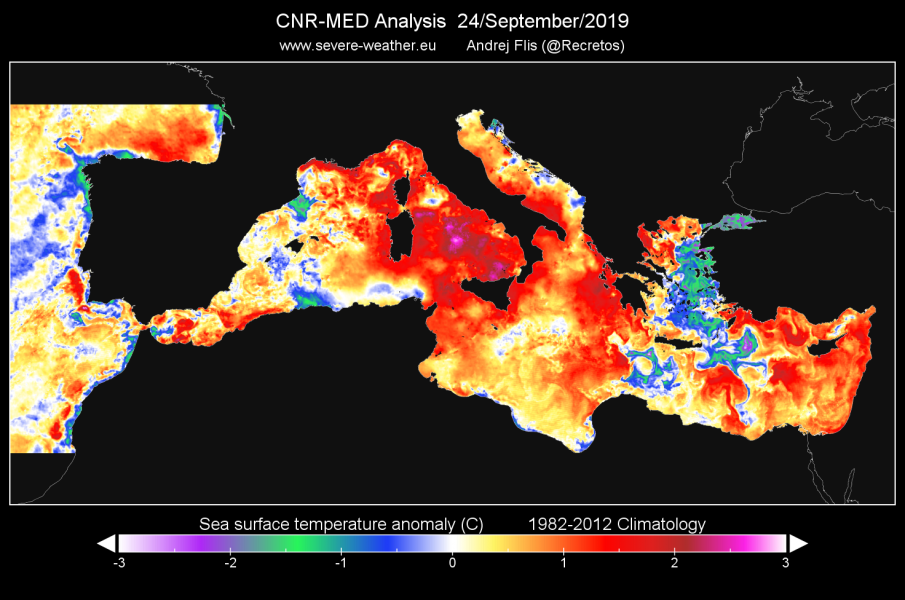 Sea surface temperature and anomaly across the Mediterranean sea on September 24rd, 2019. Maps made in-house by Andrej Flis.

The warm Mediterranean and increasingly deep troughs and lows provide an explosive combination for the development of tornadic supercells. With temperatures still as high as 22-27 °C in late September through November, ample instability is in place across the region: values of 2000-3000 J/kg MLCAPE are typical.

Deep troughs and cutoff upper lows are rounded by strong mid-level jetstreaks, frequently reaching into 40-70 kt at 500 mbar level. As deep surface lows form, they establish strong southerly to southeasterly winds in the warm sector. This sets up strong warm air advection from southern parts of the Mediterranean, bringing moist airmass and pooling it towards the surface low, in turn further increasing instability. Strong winds aloft and near the surface produce very strongly sheared environments, highly favourable for supercells.

Nearly stationary or slowly moving frontal lines / surface convergence zones typically establish in the coastal areas. Varied terrain in the coastal areas frequently produces orographic convergence and upslope flow for prefrontal storm initiation for both isolated storms and convective lines. In convective lines, storms are continuously initiated along the convergence zone and pushed by the strong mid-level flow into a succession of training cells, producing torrential rainfall along the coast and inland. Typically, any persistent storm in the training cells is a supercell (e.g. rotating) and has a significant potential to produce a tornado.

These patterns apply across the Mediteranean, along the coast of southern France, the Balearic islands, Corsica, Sardinia, western and southern Italy, the entire Adriatic coast, particularly northern and eastern parts, much of the coastal area of Greece and the Aegean sea into western and southern Turkey and Cyprus.

A strong, rapidly moving long-tracked F3 tornado hit the area between Ladispoli and Cesano, central Italy on November 6, 2016. Cesano, where the worst damage was reported, is located approximately 30 km northwest of Rome. The damage track was 41 km long. Two fatalities and one injury ere reported with this tornado.

The forming tornado coming ashore from the Tyrrhenian sea in Ladispoli.

November 25, 2018 Leuca (Puglia, south Italy) tornado. Part of a small outbreak of tornadoes across Calabria and Puglia, this tornado produced a 20-km long damage track. It entered the Salento peninsula near Leuca and tracked around 20 km NNE-wards until it ejected back to the sea near Marina d’Andrano. No injuries or fatalities were reported. Note the satellite tornado as the main tornado tracked over water.

Tornado in Velletri, near Rome, central Italy on October 6th, 2019.