A mud flow is a form of mass wasting and slope mass movement, similar to landslides and debris flows. It is a fast, rapidly surging flow, much faster than a landslide and more fluid than a debris flows. Mud flows usually originate from landslides, which become saturated with water and mobilize into a rapidly moving flow. The Pians mudflow caused little damage, except for filling the channel and spilling over bridges, requiring cleaning, but mudflows (and similar debris flows) can be deadly and there have been numerous occasions across the Alps of devastating such events.

A quite deep low-pressure system moves across central Europe today, delivering 10-20cm of snow locally from Benelux across Germany into Czechia, more in the higher elevations 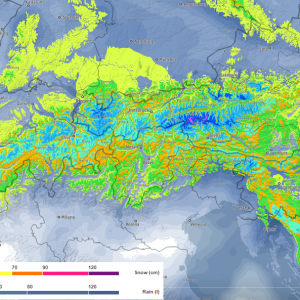 Lots of snow in the Alps this weekend, March 15-17th