A cold front was crossing the MDT risk area of Day 1 Outlook 11/10/2013 over northern Mediterranean this morning and brought heavy rain and strong winds into W Slovenia, NE Italy and NW Croatia. 30-60mm was accumulated over larger area in 12 hours between 00 and 12 UTC, while along the CRO/SLO border just north of Kvarner bay radar estimated even around 150-200mm of 12hr total. Unfortunatelly no weather stations are in that area, the closest one Matulji (source: Istramet) just N of Rijeka, Croatia reported 104mm/12hrs which fits into the radar estimation.

Cold front arrived into the N Adriatic at around 4:00 UTC and was quite rapidly progressing east across the region.

A couple of brief waterspouts were reported in the Trieste gulf at 5:00 UTC, which lasted for 1-2min only. SE winds were blowing ahead of the front while strong westerlies were behind the front. 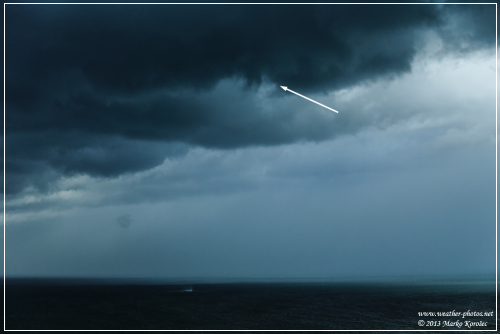 When the front hit the coast of N Adriatic sea, wind gusts between 70-90 km/h were reported. The front was then continue to move east across Slovenia and Croatia during the rest of the morning.

Share on TwitterShare on RedditShare on FacebookShare on PinterestShare on WhatsApp
High rainfall accumulations over NE Italy and NW Croatia - Oct 10, 2013
← Previous
Powerful cyclone Phailin about to make landfall in India
Next →
Comments are closed.