A prefrontal severe supercell hit Celje and its surroundings in central Slovenia with extreme torrential rainfall and large hail late on August 29. Very hight cumulatives, reaching 91 mm were reported (Griže pri Žalcu). Large hail accumulations were reported in Velenje, while to the south Polzela is reported to have been hit with wallnut-sized hail. Flash flooding and numerous landslides were also reported, one of them blocking the Celje-Ljubljana railroad. Chaser reports indicate a well-developed HP supercell.

View of the supercell near Žalec, Slovenia, photo by Marko Korošec.

View of the supercell near Celje, Slovenia, photo by Marko Korošec. 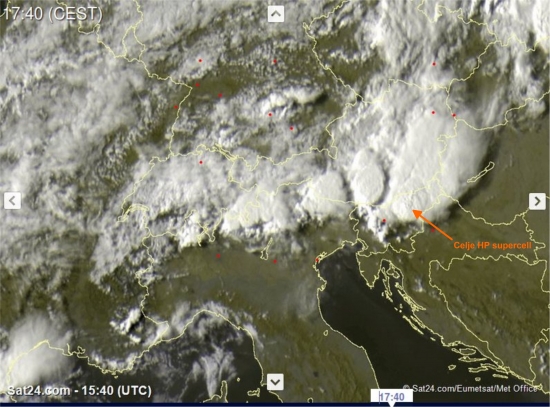 A dangerous flooding and snowfall event is expected across southeast Iceland, as a powerful depression heads for the island this weekend