Incredible lake-effect snow has verified across the eastern shores of the lakes Erie and Ontario this weekend, some areas across the Tug Hill Plateau received even more than 50 inches (4 feet or 120 cm) of snow in around 48 hours period. Below are details with satellite imagery as well as numerous reports from the infected cities.

Note: Lake-effect snow develops when a very cold air mass (usually during the Polar / Arctic outbreaks) moves across the warmer lake (or sea, e.g. Black Sea, Adriatic sea, or Baltic Sea in Europe) water. The layers of air closer to the lake surface are heated up by the warm lake water, picking up moisture/water vapor from the lake and rises up through the colder air advection above. This results in convective squalls and bands of heavy snow. Snow is then deposited on the leeward (downwind) side of the lakes (seas) shores.

Convective cloud streets (lake-effect snow bands) were perfectly seen from the satellite during the peak time of the event, Friday, Feb 28th. The most defined areas are marked on the map, eastbound of the lakes Michigan, Erie and Ontario: 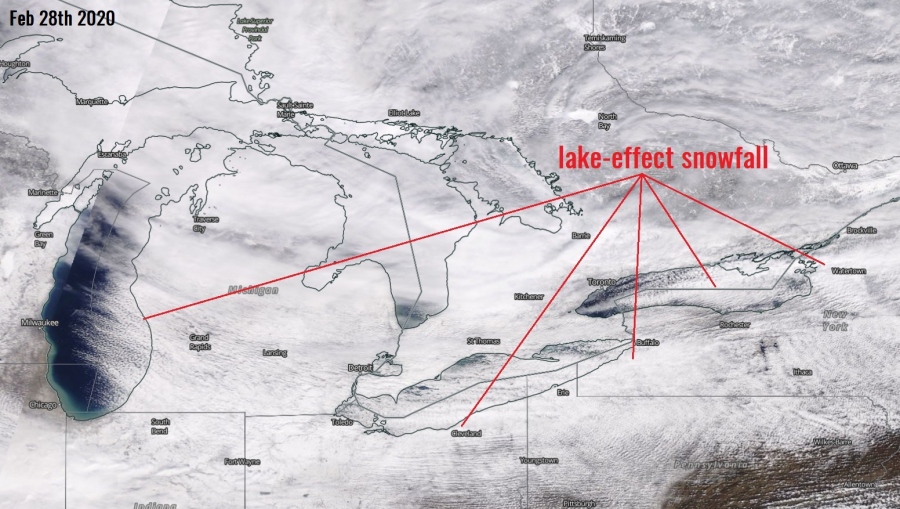 A day after, we could see a lot of deep snow coverage over the same areas, Feb 29th: 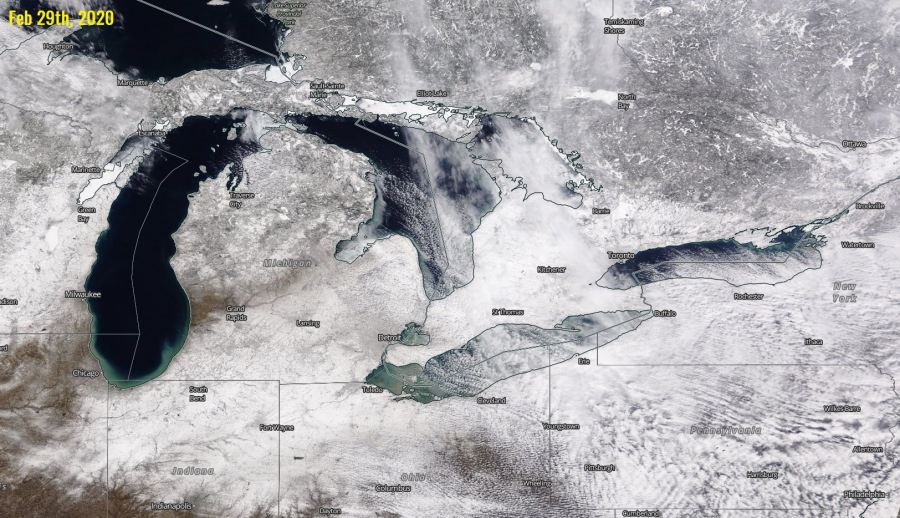 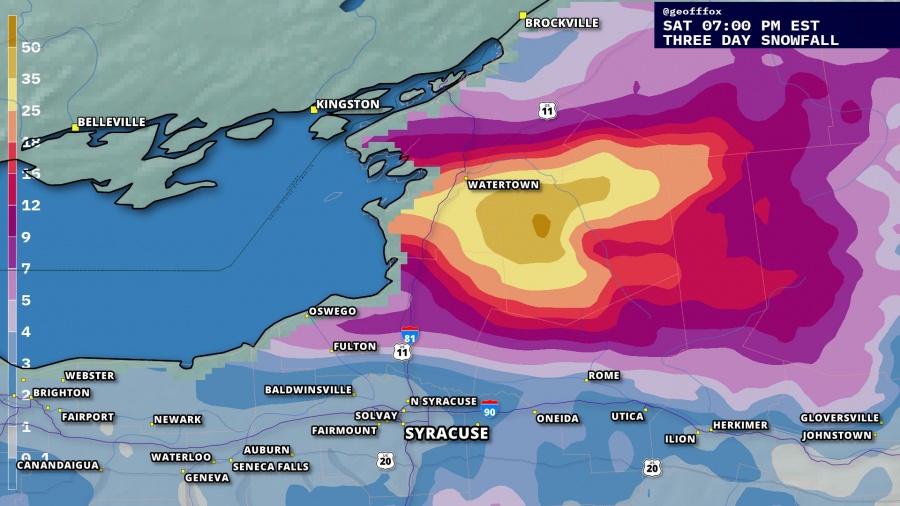 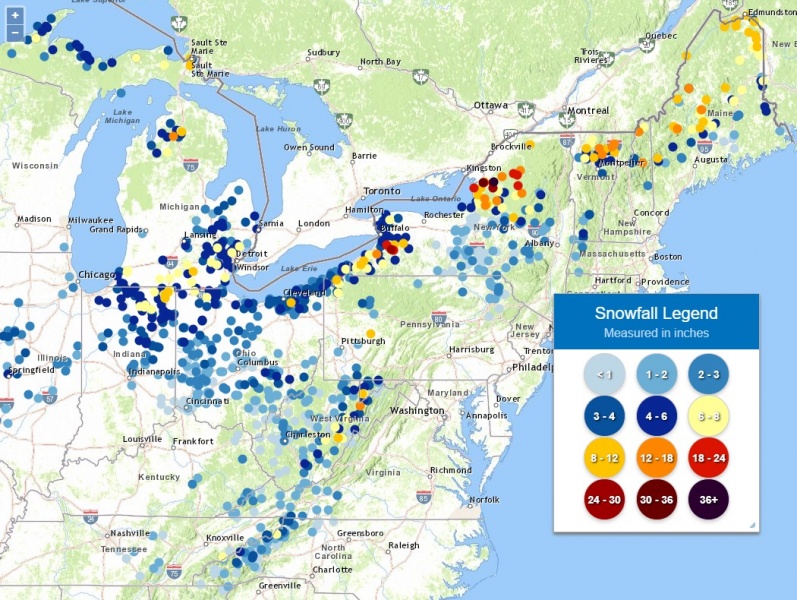 Impressive #snow snow totals. These places are climatologically favored for snow. Some spots get over 20 feet in an average season. As I plotted my maps I noticed the population mostly stays away. #LakeEffect pic.twitter.com/8dvv2jjubh

Check out some of the highest snow totals from the lake effect event the last few days. Carthage got more than half of #ROC's total snow so far this season, in about 36 hours! The power of #LakeEffectSnow pic.twitter.com/EErrv6vYgn

Reports of huge amounts of snow accumulated from the Tug Hill Plateau – town Copenhagen wast of the city Watertown.

#LakeEffect is finishing its final push through the area. Hard to get accurate #totals but seems to be anywhere between 20" and 36" inches depending on where you measure. We will likely see totals on top of #tughill well over 40" #snow #les #storm #snowstorm #blizzard pic.twitter.com/reSDaPQC8z

#LakeEffect has finally relented here on #tughill the #Blizzard left has much as 48" of #snow in many locations east of #lakeontario .This video was recorded in the village of #Copenhagen. #NewyorkBlizzard #Les pic.twitter.com/FmTI44DgSS

Satellite animations of the maintaining convective cloud streets producing heavy snowfall on the east-southeast sides of the lakes. A wider view of the water vapor satellite indicates a long dry slot wrapping around the low in Quebec which was powering the event. See also a spectacular visualization of the lake-effect snow trajectory:

#LakeEffect snow is impacting the #GreatLakes Region today with the fetch on #LakeOntario causing #blizzard conditions for #NYwx! Wind flow is outlined in #GOESEast imagery via a long dry slot wrapping around the low in Quebec which us powering the event. https://t.co/Ndax2pPy7v pic.twitter.com/qE5hKul3s1

This is the #GOES16 multispectral RGB composite "Day Cloud Phase Distinction" imagery from early Friday. Notice how the clouds change from mostly water-based over Lake Ontario to glaciating as they approach the shoreline.#LakeEffect pic.twitter.com/tsv7MZmGDS

The #SnowSquall band (#LakeEffect and otherwise) location/orientation evolve as a lobe of the vertically stacked low pivots, and the radar aligns well with the 700 millibar vorticity field #Meteorology pic.twitter.com/lOPDVaRNcP

Here are various reports during the heavy snowfall (LES) event:

#LakeEffect white out: watch these vehicles drive into the white abyss as a #snow squall dumps on western NY.
We'll see you live on the @weatherchannel 3-8 PM ET.#NYwx@NWSBUFFALO pic.twitter.com/7b4V55X5lS

See the forecast discussion of how this event unfolded: