A powerful multi-vortex tornado hit the city of Rhodes on the northeastern part of Rhodes island, Greece in the Aegean sea this morning at 5:18 UTC. A MDT risk area on DAY 1 Outlook for 17/10/2013 has been issued for SW Turkey and parts of eastern Greece with threat for severe thunderstorms producing tornadoes, severe winds and heavy rain. A sharp cold front was progressing ESE across the Aegean sea with several multicells and supercells embedded in the convective line. Refer to the update earlier today for more details.

Apparently, as the frontal boundary was approaching Rhodes island, an intense tornadic supercell formed north of the island and tracked towards the city of Rhodes. It spawned a multi-vortex tornado just NW of the city which travelled very close to the coast. Below are two screenshot photos from the video, showing a broad rotating wall cloud with large funnel clouds and circulation on the water. The complete condensation is not visible on the video, likely due to rather short duration of tornadic cycle not allowing it to organize more. It came onshore quite soon after it developed. 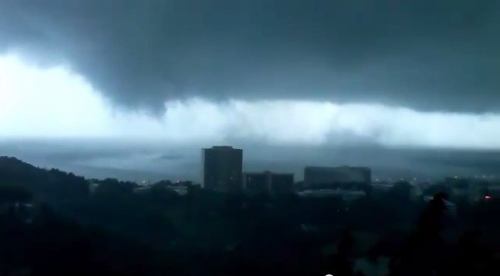 (video screeshot) of the multi-vortex tornado in front of Rhodes, Greece as seen from an elevated location. Source: http://www.youtube.com/user/rodiaki

(video screeshot) of the multi-vortex tornado in front of Rhodes, Greece as seen from an elevated location. Source: http://www.youtube.com/user/rodiaki

Looking at the video, very impressive tornadogenesis took place just in front of the city, with textbook RFD cut from the west (left) and multiple vortices spinning over the water while the whole mesocyclone of the storm was rapidly rotating. Notice also several well-defined large funnel clouds beneath the wall cloud.

The outer circulation skimmed the shore as can be seen on the video below. Some minor damage was reported afterwards, an unofficial report says EF0 / T1 which confirms the fact, that the main intense multi-vortex circulation was just offshore and no severe damage was done onshore.

Here are a couple of damage photos from the city of Rhodes, showing some minor damage to buildings and trees. Very intense rainfall and local flash floods have also been reported, as was already been reported in in the early afternoon update. 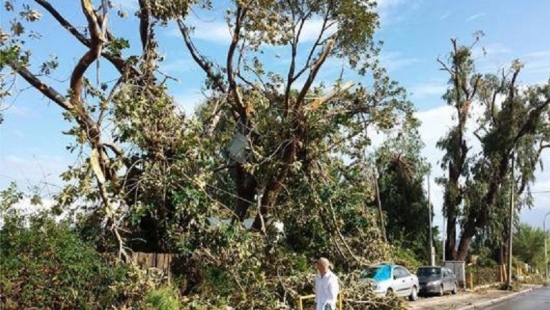 If you have been affected by severe storms or have photos/video material of damage or weather photos of the event, consider sharing the information and contact us.