Today, on January 12th, 2020, an eruption began at Taal volcano, located in the Philippines. The eruption column reached around 15km altitude and created an ash cloud that is moving north, so far-reaching over 1000km distance. Below is a satellite animation, showing the growth and spreading of the large ash cloud.

Taal is a complex volcano located on the island of Luzon in the Philippines. It is the second most active volcano in the Philippines with 35 historical eruptions. All of these eruptions are concentrated on Volcano Island, an island near the middle of Taal Lake. The volcano has had several violent eruptions in the past, causing loss of life in the island and the populated areas surrounding the lake, with the death toll estimated at around to 6,000. Because of its proximity to populated areas and its eruptive history, the volcano was designated a Decade Volcano, worthy of close study to prevent future natural disasters. All volcanoes of the Philippines are part of the Pacific Ring of Fire. The image below shows the location of Taal Volcano in the Philippines, and the second image shows the large ash cloud from the Taal volcano extending far north. The third image shows sulfur dioxide emissions from the volcano, also reaching far north, along with the ash cloud. 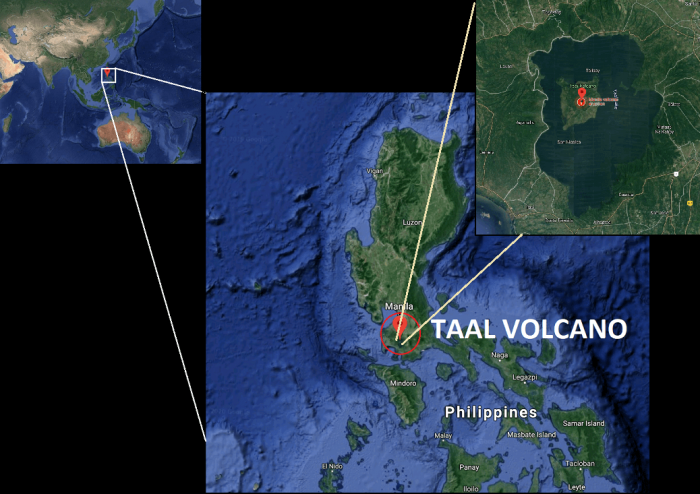 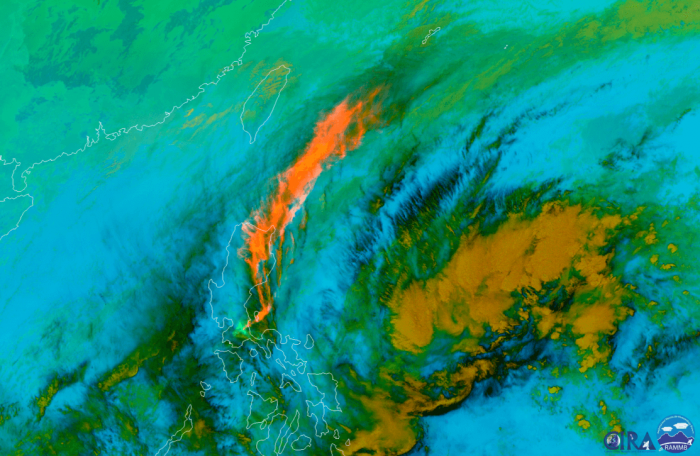 For more than a month, Taal Volcano has been on a high alert level, as the scientists in-charge saw signs that the volcano could erupt in the very near future. Today the alert level has been further raised, meaning that an eruption is to be expected in the next hours or days. Two earthquakes shook the region prior to the eruption, along with many smaller tremors. A magnitude 2.5 and a magnitude 3.6 earthquake were felt in the nearby area. The ash column was very dense, enough to cause large amounts of volcanic lightning inside the eruption column.

The eruption was designated as phreato-magmatic. It means that not only hot magma was involved in the eruption, but it was also a partial steam explosion, as water came into contact with the molten rock under the volcano, causing high pressure. The ash column reached nearly 15km high and has caused ashfall in Manilla, the capital city of the Philippines, around 65km north of the volcano. Air traffic was canceled around the volcano and further north, as the ash cloud was carried north by the prevailing winds.

Over 8000 people have been evacuated from the vicinity of the volcano, where the main hazard zones have been declared. Residents are advised to wear masks.

Streaks of lightning blazed through columns of ashes amid #TaalVolcano eruption as seen from Nasugbu, Batangas on Sunday evening. Photo from Domcar Lagto, ABS-CBN News pic.twitter.com/e3Rh5wDOzb

The eruption is currently ongoing, and scientists emphasize that this could be just a first in a series of eruptions, perhaps even larger ones, so the volcano stays on high alert. Since the volcano island is surrounded by the caldera lake, a tsunami is not excluded, along with pyroclastic material flow, if the volcano would have an even stronger eruption.

Lightning strikes out of the Taal Volcanic Ash Cloud in the #Philippines pic taken by LJ Gregorio pic.twitter.com/RsucPfK7HZ

We will keep you updated on any important further development. While you wait for more updates, don’t miss the latest 8-15 day forecasts, indicating a possible pattern shift, sending cold into eastern USA and likely also into Europe:

Meawhile a monster extra-tropical cyclone delivers up to 200 km/h towards western Europe: