A large extratropical storm will bring another very windy day across Ireland, Wales, England, and Scotland on Thursday. Severe storms are also possible. Isolated severe storms are possible across Benelux and east-southeast Europe. 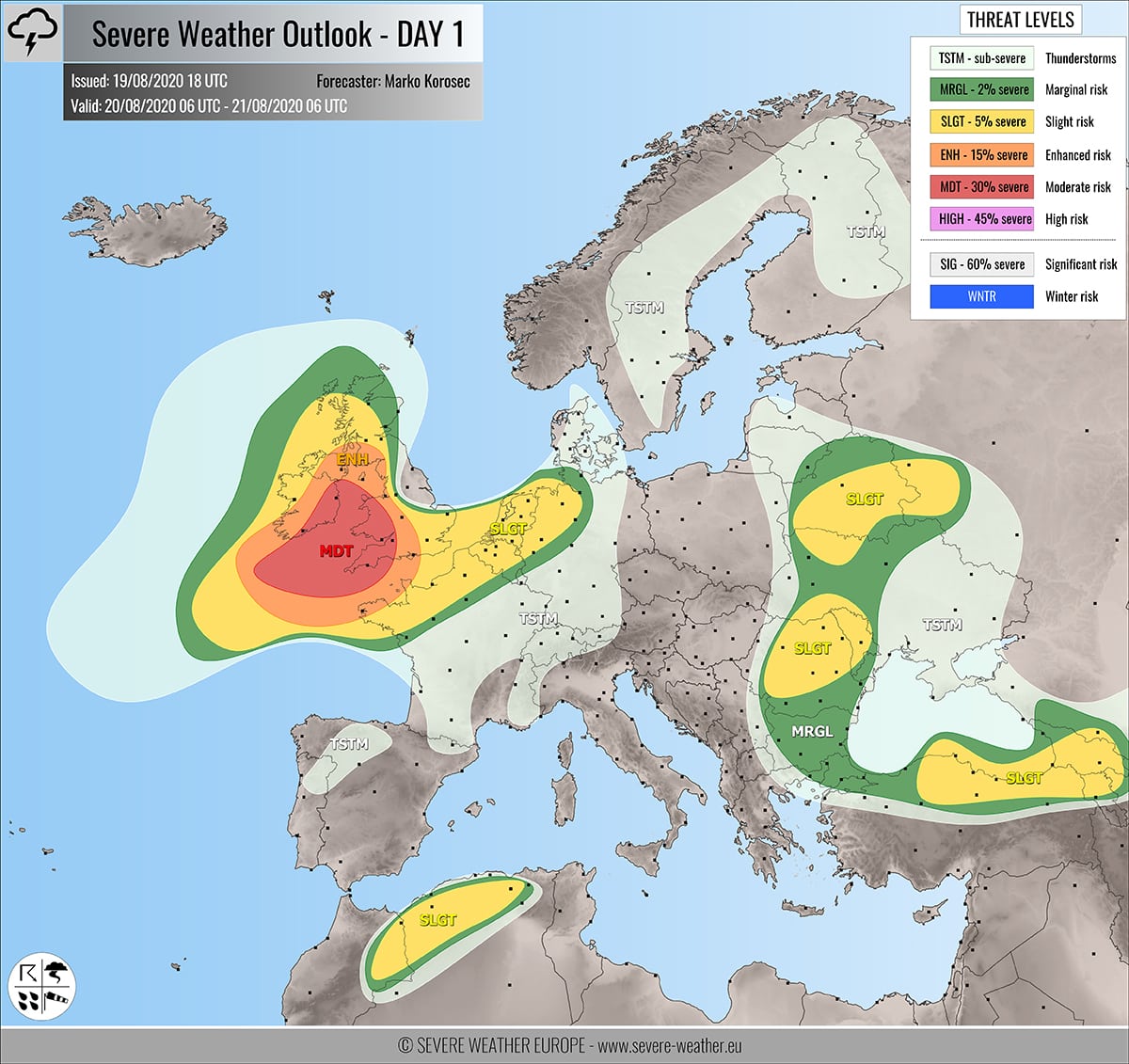 A large and deep upper trough/low over North Atlantic will expand into western Europe with a powerful surface extratropical depression. Another low is moving across the Black Sea region. In between, an upper-level ridge is building up from the south across central into northern Europe. At the surface, a cold front is extending from the North Sea across Benelux towards Iberia. Occluded fronts are moving across the UK and Ireland. 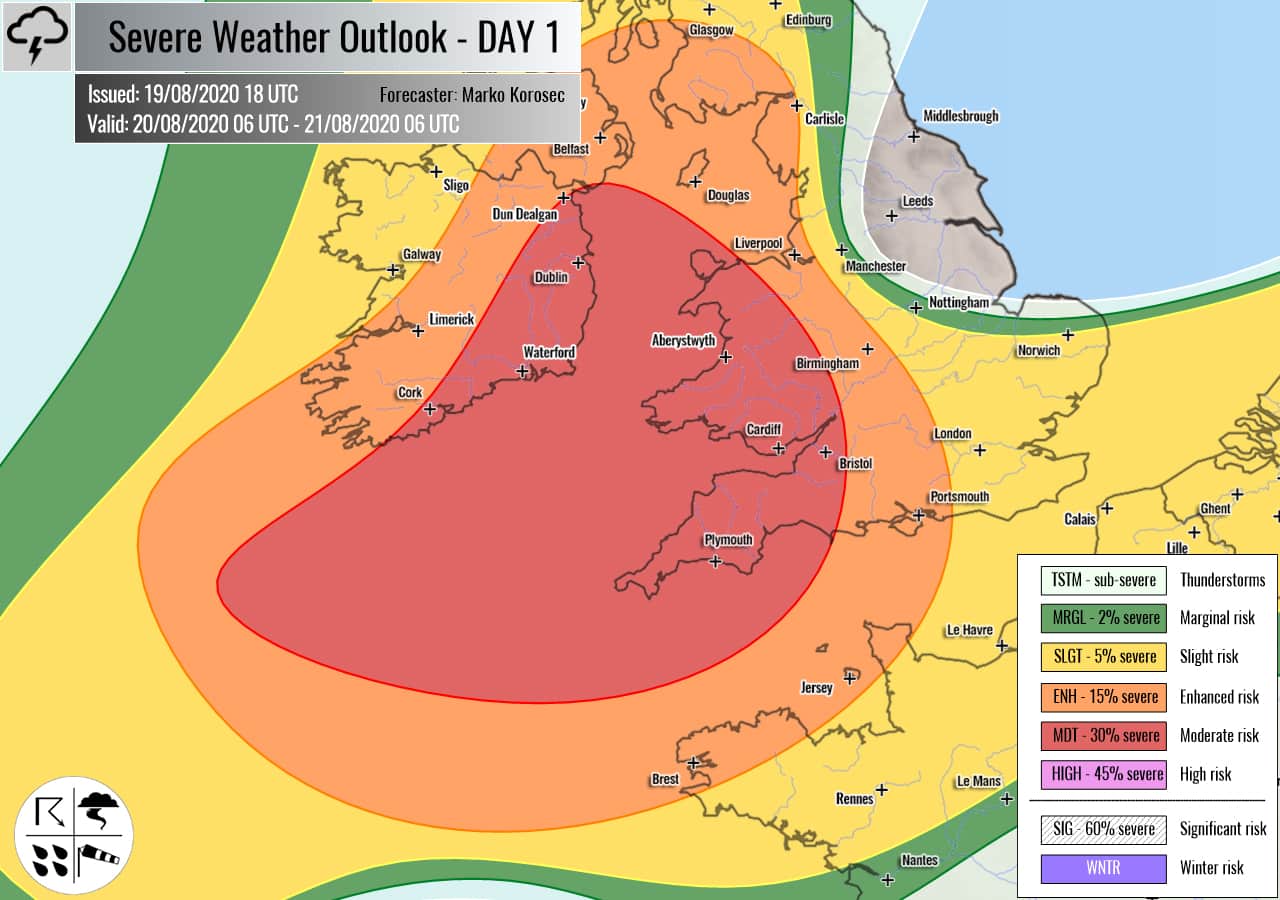 MDT/ENH risks have been issued for most of Ireland and Northern Ireland, Wales, west-southwest England, southern Scotland, and northwestern France with a threat for severe storms, capable of producing severe damaging winds, torrential rainfall, tornadoes, and marginal hail.

Similar to Wednesday, a large North Atlantic extratropical cyclone brings very windy conditions across most of Ireland and the UK. A quite strong 50-60 knots deep-layer shear is present, coupled with marginal instability.

Scattered to widespread organized storms with rain/wind squalls are also expected within the cool maritime airmass beneath a deep cyclone’s core. Together with severe winds, torrential rainfall is possible to occur as well. Especially across the MDT risk. As storm cells will be rather fast, mainly intense rain/wind squalls are expected.

Strong low-level shear and helicity should also enhance the threat of tornadoes with any better-organized low-topped supercell storm. The threat is rather strongly dependant on instability.

SLGT risk has been issued for areas surrounding the MDT/ENH risks across Ireland, Northern Ireland, Scotland, England, and northern France into Benelux and northwestern Germany with more isolated severe storms possible to occur.

While activity over the British Isles is mainly within the cyclone’s core, the SLGT over Benelux and Germany has been placed along the main surface front. Storms could support an isolated supercell or two with large hail and severe winds threat. 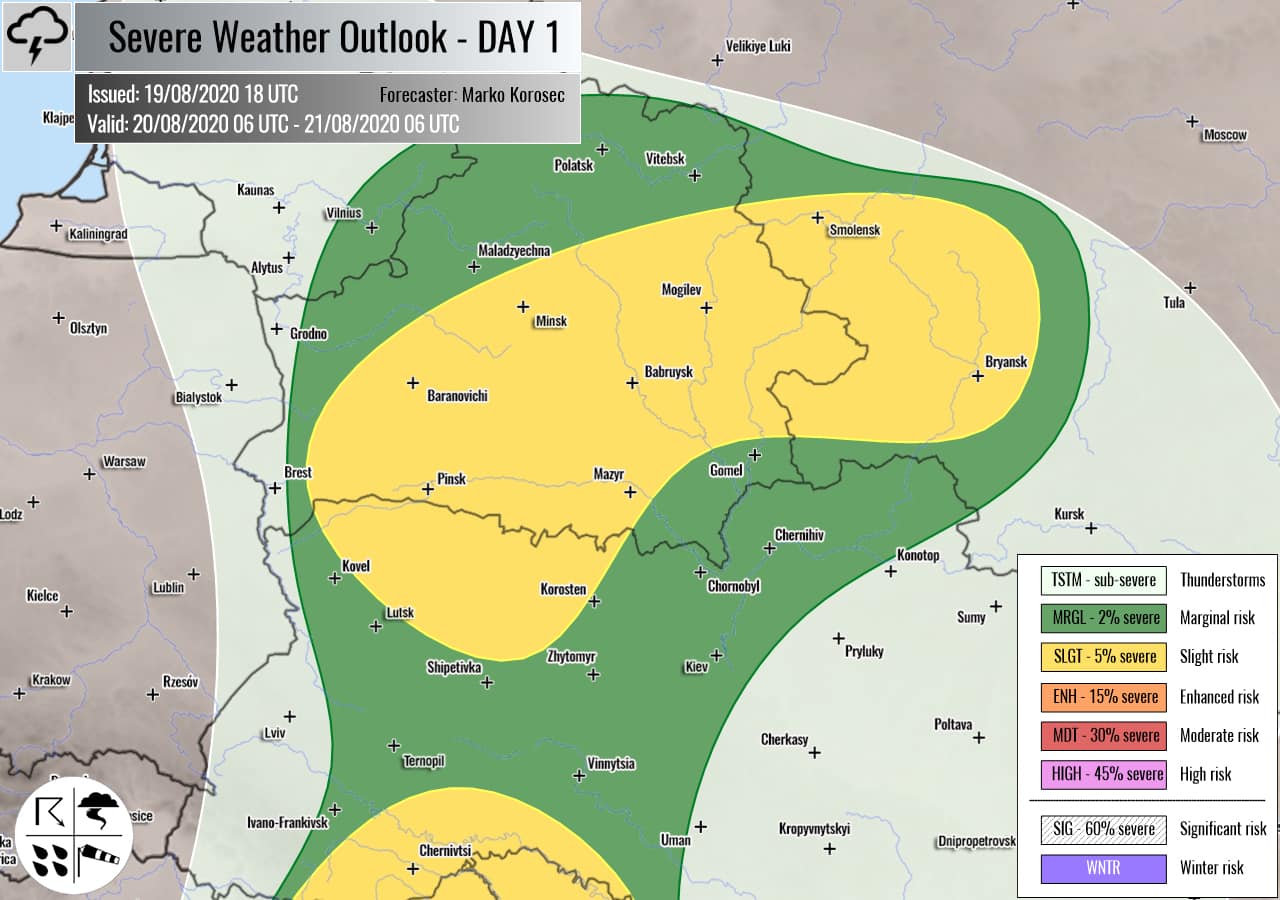 SLGT risk has been issued for south-central Belarus into northwestern Ukraine and western Russia with a threat for severe storms, capable of producing marginal hail, and torrential rainfall with flash floods.

Scattered daytime driven storms are expected near the local topography, decaying in the evening hours. Moderate CAPE but low shear should support slow-moving multicell storms with locally lots of rain and flash floods. 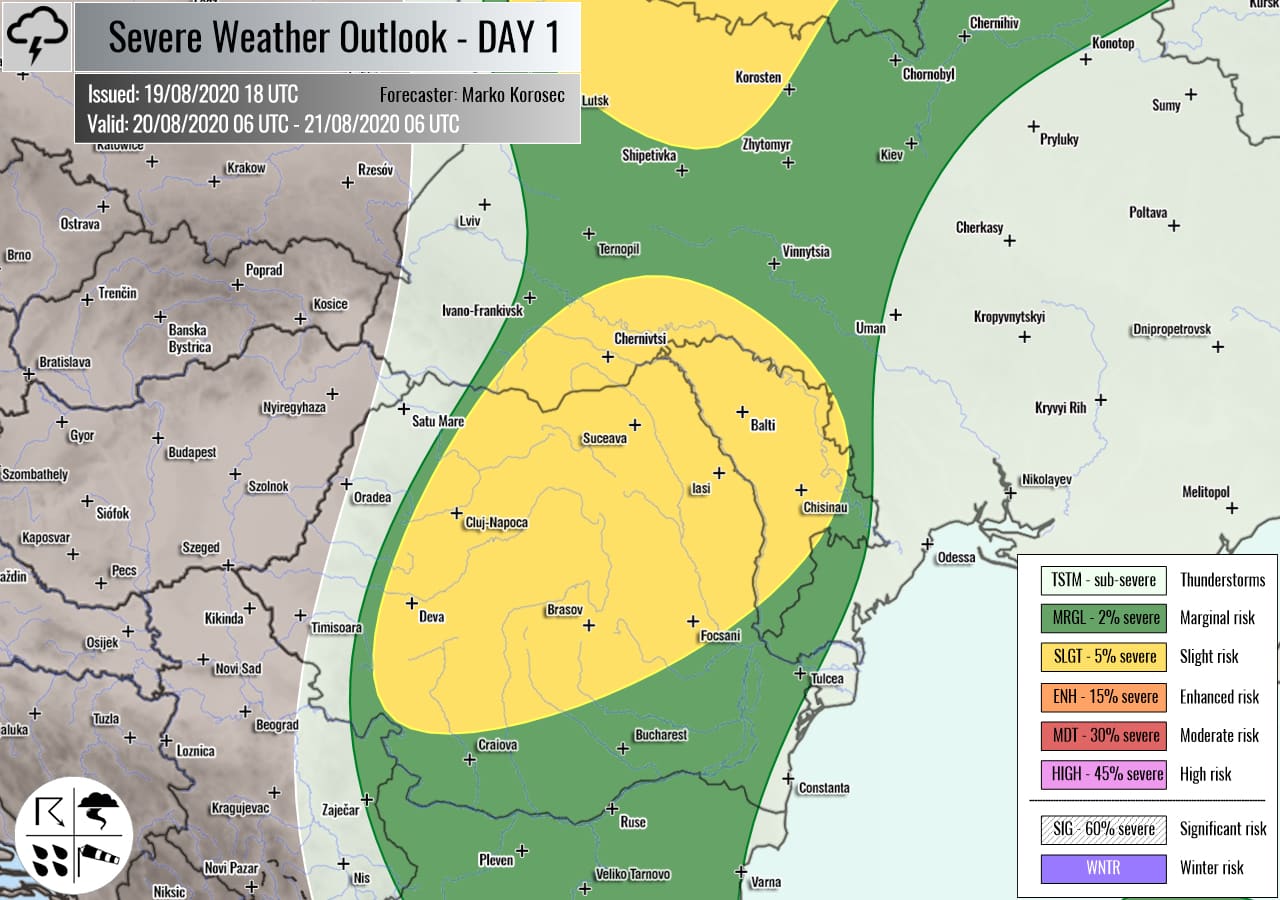 SLGT risk has been issued for north-central Romania, southern Ukraine and Moldova with a threat for severe storms, capable of producing marginal hail, and torrential rainfall with flash floods.

Similar to areas further north, scattered daytime driven storms are expected near the local topography, decaying in the evening hours. Moderate CAPE but only low shear should support slow-moving multicell storms with locally lots of rain and flash floods. 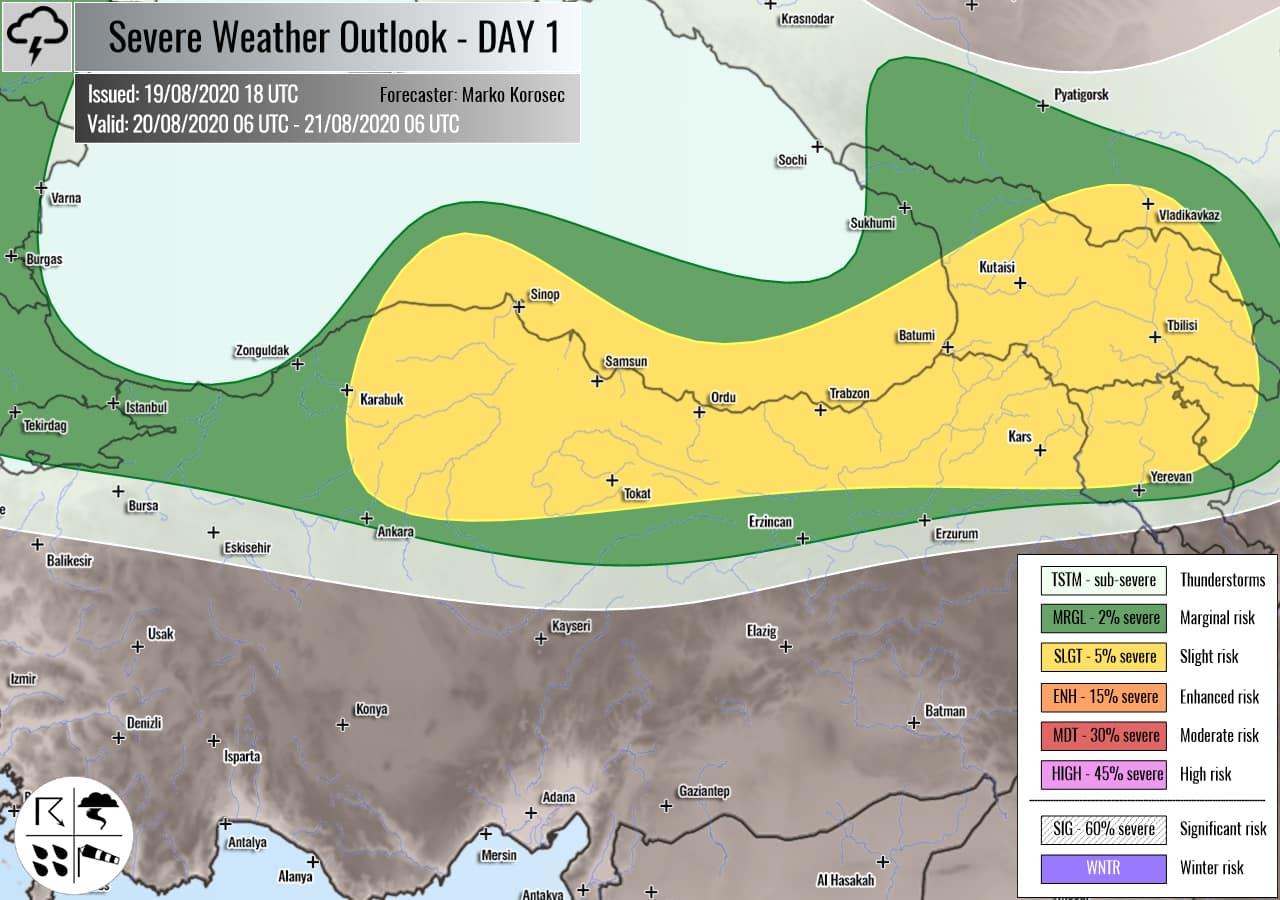 SLGT risk has been issued for northeastern Turkey into Georgia and northern Armenia with a threat for severe storms, capable of producing severe winds, large hail, and torrential rainfall.

Under an upper wave, moderate instability and shear are coupled together across the Black Sea region in northern Turkey. It appears likely a few isolated supercells are likely to form, producing large hail and severe winds as the primary threats.

SLGT risk has been issued for northeastern Algeria with a threat for isolated severe storms, capable of producing severe winds, large hail, and torrential rainfall.

TSTM risk areas have been placed across Germany, France, the western Alps, northern Spain, Scandinavia, and southeastern Europe with a threat for daytime driven storms. Limited shear is present, so the storms should remain sub-severe.