UPDATE on the big meteor over Florida Keys and Cuba on February 2, 2019

A big meteor exploded in the skies over southern Florida and northwest Cuba yesterday local early afternoon, February 1. It produced a damaging sonic boom and dropped meteorites in Cuba. Here is some new information.

Sonic booms rattled northwestern Cuba, reportedly damaging and breaking windows. Sonic booms are common with meteors that penetrate deep into the atmosphere and produce meteorite falls. Eyewitness reports of the brilliant meteor compiled by the American Meteor Society produce a preliminary track for the meteor which aligns well with the reported meteorite fall.

Meteorite fall is now confirmed near Viñales, Cuba. Reported meteorites exhibit typical characteristics of fresh meteorite falls, with partially or fully developed dark fusion crust enveloping the meteorites. A fusion crust forms during the meteorite’s fiery blast through the atmosphere. On the inside the meteorites appear grayish, typical for stony meteorites. At least one reported meteorite displays flow lines indicating oriented flight: the melted surface was exposed to constant flow as the meteorite descended, producing flow lines. Some black veins are apparent on exposed fresh breaks in the meteorites in some photos, indicating prior shock fracturing of the rock, likely during its time in the main asteroid belt. There is no official number of recovered meteorites, however, dozens have been reported and the number in such larger meteorite falls can go into hundreds or even thousands. It is likely that only a very small percentage of the incoming rock (meteoroid) survived, maybe in the 1-3% range.

#CUBA: This is a close up of a #rock people in the #Viñales area believe is part of the #meteorite that fell in the area. You can see this one is almost the size of a #mobile phone. @WPLGLocal10 pic.twitter.com/xDO0jy6tCO

Note the radial flow lines on the meteorite on the left.

The first images of one of the stones that seem to have fallen in the area of ​​#ValleDeLaPrehistoria in #PinardelRio begin to appear. Still not confirmed. Journalists and experts are already in the area. #Cuba #meteorite #meteor 🛑☄️🔥 pic.twitter.com/gRVnZ7Dt99

Satellites detected both the flash of the meteor and its smoke trail:

@NWSKeyWest radar may have detected the meteor that affected western Cuba earlier today. At 121 pm, a signature was detected near Viñales, Cuba, at a height of over 26,000 ft above ground level. #flwx #KeyWest #FloridaKeys #meteor pic.twitter.com/R2JIlVwpsS

My initial estimate of 4 m might be significant overestimate. According to update from @pgbrown, infrasound suggests fraction of a kiloton. ~1000 times smaller than Chelyabinsk & scaling makes Cuba object more like ~2 m. Objects this size hit Earth every few weeks on average. https://t.co/9pLMMi1AP4

We will be providing additional updates as new information becomes available. 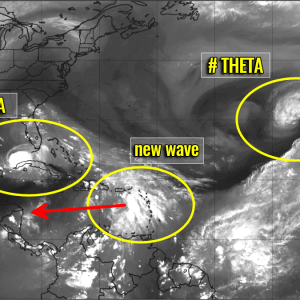 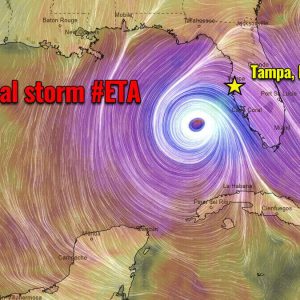 Latest on Eta: the Florida Keys landfall was the record-breaking 12th United States landfall this season, new models suggest Eta could become a hurricane on Wednesday 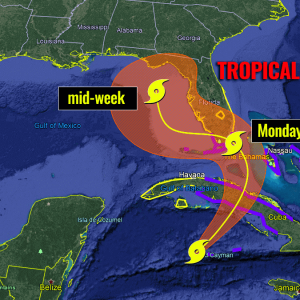 Hurricane Warning for the Florida Keys ahead of an intensifying Tropical Storm Eta, now heads for a record-breaking 12th US landfall of the season