Tropical Storm Karen developed over the Yucatan Channel and the southern Gulf of Mexico Thursday morning, and is now tracking toward the U.S. Gulf Coast.

Residents of a vulnerable Louisiana island town were ordered to leave Friday as Tropical Storm Karen tracked toward the northern Gulf coast, weakening but poised to be the first named storm to hit the U.S. in what has so far been a quiet hurricane season.

National Hurricane Center forecasters expect Karen to be near the central Gulf Coast on Saturday as a weak hurricane or tropical storm. Along with strong winds, the storm was expected to produce rainfall of 75 to 150 millimetres through Sunday night, with isolated totals up to 250 millimetres possible. Forecast tracks showed it possibly brushing, or crossing, the southeast Louisiana coast before veering eastward toward south Alabama and the Florida panhandle, as it is shown below on the mixed model guidance.

With that said, given the upper atmospheric wind shear in play, it remains to be seen whether Karen can strengthen to hurricane status. Thanks to the wind shear, the most significant impacts from Karen will be north and east of the center of circulation. 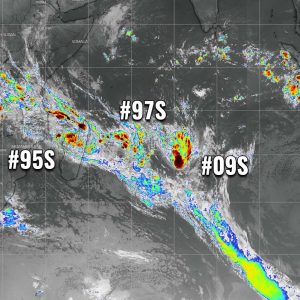