First aerial surveys are being conducted in the northern Bahamas after Hurricane Dorian ploughed through. It spent two full days grinding the islands with major hurricane force winds, peaking at CAT5 and 185 mph (298 km/h). Extremely severe winds combined with a massive storm surge, reaching as much as 8 m high. The devastation in the wake of Dorian looks like the aftermath of a nuclear blast.

Watch the eye come into view, undergo an ERC over #GrandBahama island & then remain stationary for the rest of the day as it slowly degrades & broadens from ocean upwelling / land interaction. pic.twitter.com/LFOkNNlHR8

Abaco Island was hit by the full brunt of the massive CAT5 monster, with 185 mph (298 km/h), while Grand Bahama island received slightly lesser 145-175 mph (233-282 km/h) winds, but this was offset by Dorian coming to a halt over the central part of the island and grinding it with intense winds for 36 hours! The entire region was also inundated by a storm surge up to 6-8 m high. Indeed, spaceborne cloud-penetrating radar imagery shows large parts of Grand Bahama completely submerged while under the hurricane. 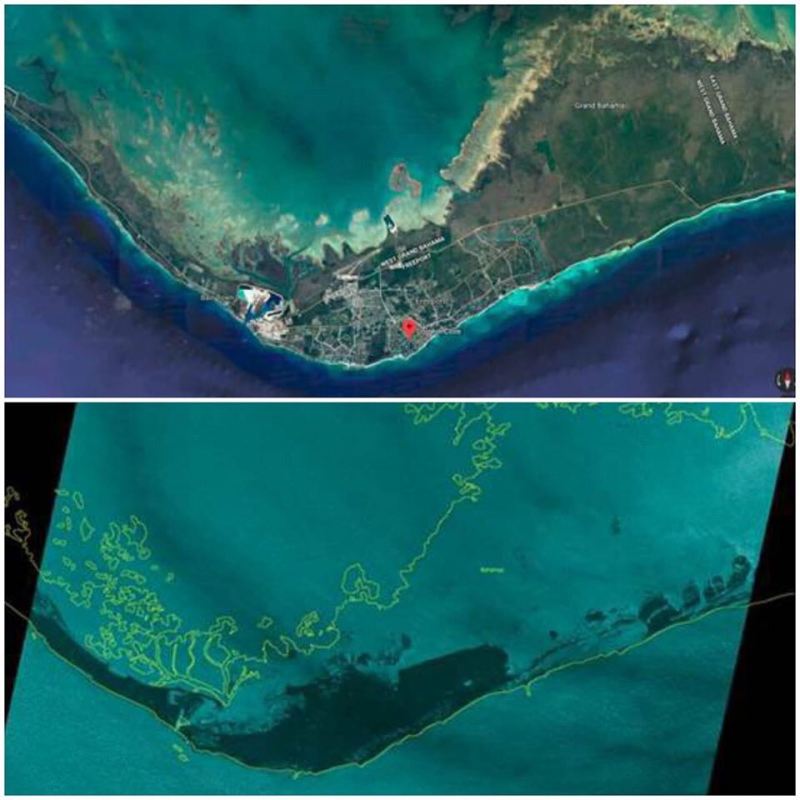 Devastating storm surge on Grand Bahama island: satellite image of Freeport before Dorian (top) and satellite radar image during storm surge (bottom). Only the old town is reported to have remained above the storm surge. Large parts of the island were submerged. Image: @Rankinstudio / @ReedTimmerAccu TW

Aerial surveys show the chilling reality of the aftermath of Dorian: much of infrastructure and housing on both islands destroyed, leveled to the ground in some areas.

WXChasing shows devestation on Abacos from hurricane #Dorian, and stated, “Josh @iCyclone is a very resilient person and I’m very confident he is just fine . . . zero coms and the only way off the island is to swim about 50 miles so he isn’t missing, he is simply off the grid.” pic.twitter.com/8Rrb9pZ2Tb

We are starting to get some aerial pictures from Abaco where #Dorian made landfall as a 185 mph CAT 5 hurricane. Needless to say, damage is catastrophic. Credit: James Julmis pic.twitter.com/CwgljP00xp

Heartwrenching visuals incoming from the Bahamas. We’re getting our first look at the aftermath left behind by #HurricaneDorian Our hearts go out to those already affected by this historic storm. > https://t.co/f9fhfA4y2R pic.twitter.com/syscWnlaAZ

Aerial footage shows the devastation in the Bahamas, where Hurricane Dorian barreled to shore Sunday as a Category 5 storm and left at least five people dead. https://t.co/ypPCyODxpZ pic.twitter.com/440HnIvHB6

#MarshHarbour #Bahamas 15 minutes ago. Airport is still under 3 feet of water. Cherokee Air and Abaco Air reported destroyed. Ok for news media to use with acknowledgement. Prayers. This is really tough to watch. #HurricaneDorian @GovRonDeSantis @DenisPhillips28 pic.twitter.com/gAZf2Byt6c

Also see video reports by people trapped on both islands while getting hit by Dorian: