A powerful high-pressure system is dominating much of Europe today, centered over the Baltic region. With northeasterly winds along the southeastern flank of the ridge, a much colder air mass is now underway across the Balkans and central Europe. A developing cold outbreak intensifies tonight as the upper low aloft deepens. The much colder air mass will continue spreading towards the Mediterranean until Thursday, with damaging frosts likely in many areas! The upper low will also result in lots of snow over the Balkan peninsula.

Here is the surface pressure and temperature analysis this evening, revealing an extensive high-pressure system centered over the Baltic region – the central pressure is around 1042 mbar and still rising. A broad channel of a tight pressure gradient has established. Supporting the cold outbreak far west and southwest over the next few days. 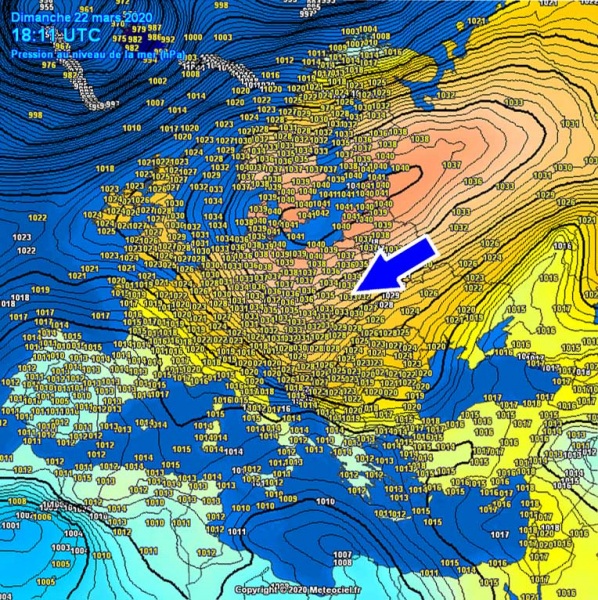 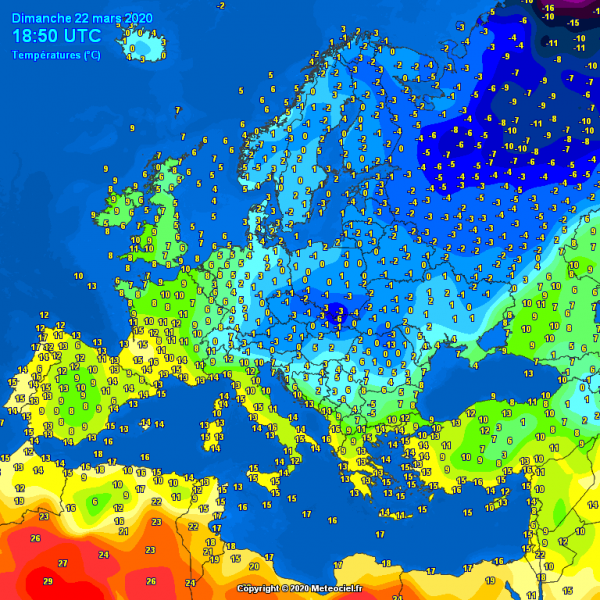 The upper-level ridge is strengthening this weekend, with an extensive surface high-pressure system. Both will be gradually but slowly drifting east-southeast over the next few days, allowing the northeast low-level flow to maintain from eastern Europe towards the Balkans and central Europe. An upper low is moving southwest on the edge across the northern Balkans tonight and is expected to deepen and intensify through Monday and Tuesday while moving further west over northern Mediterranean. On Wednesday, the low grows bigger and strengthens over the Mediterranean: 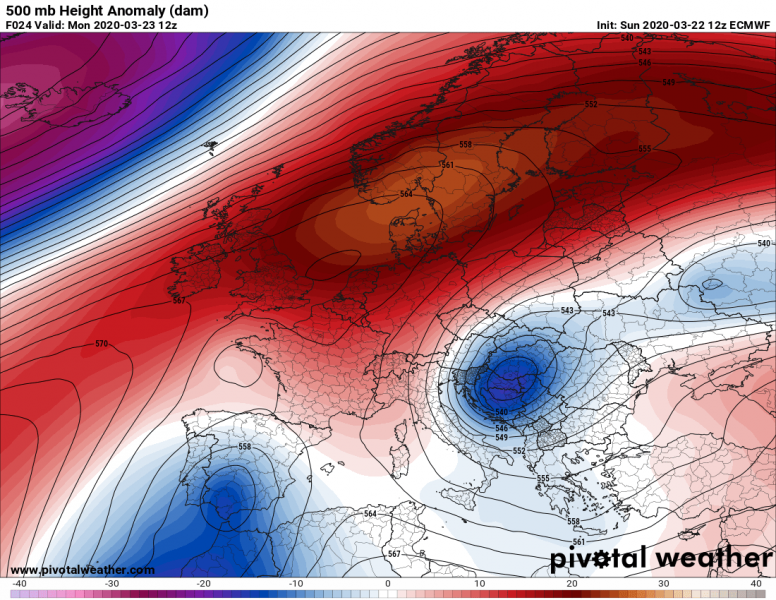 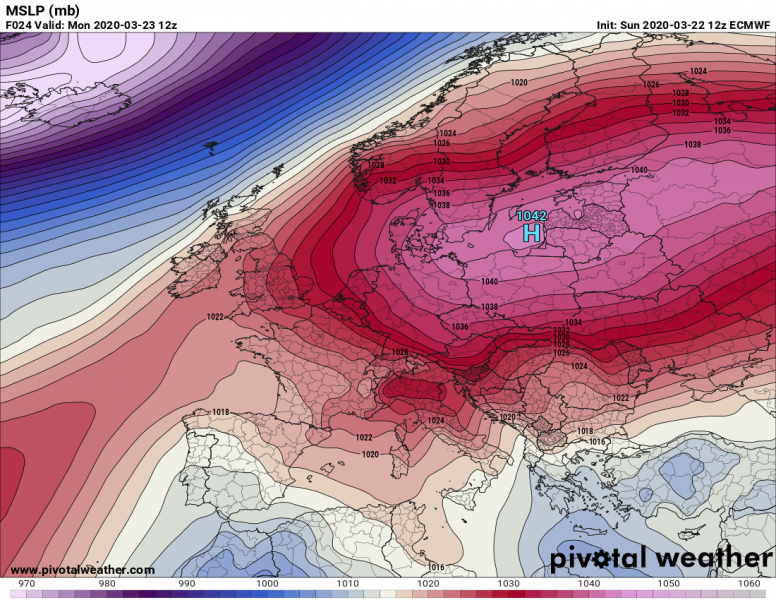 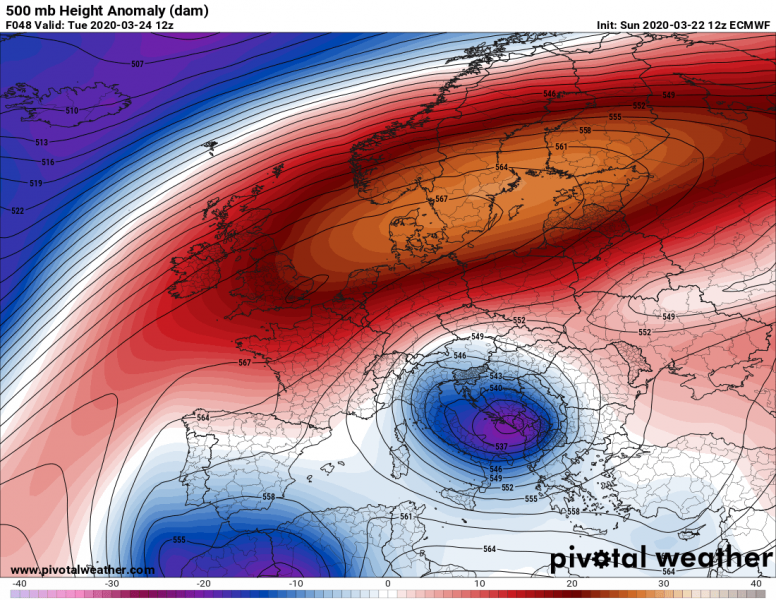 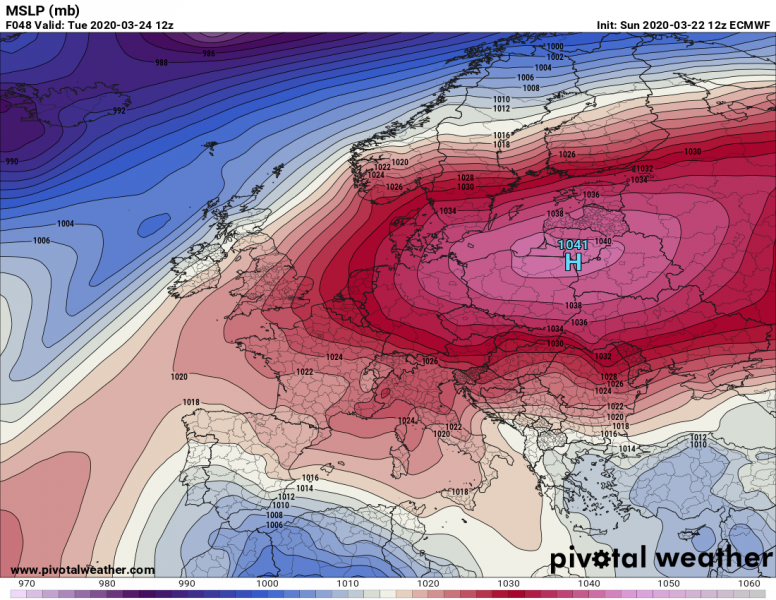 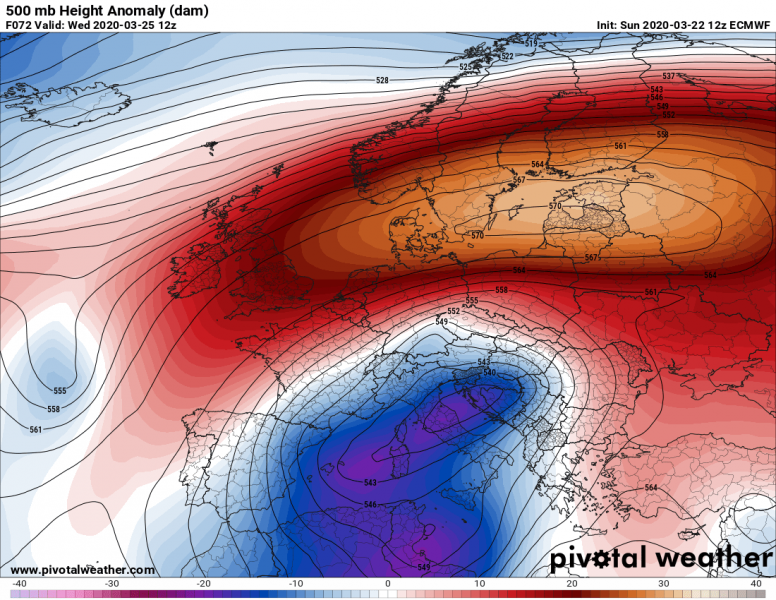 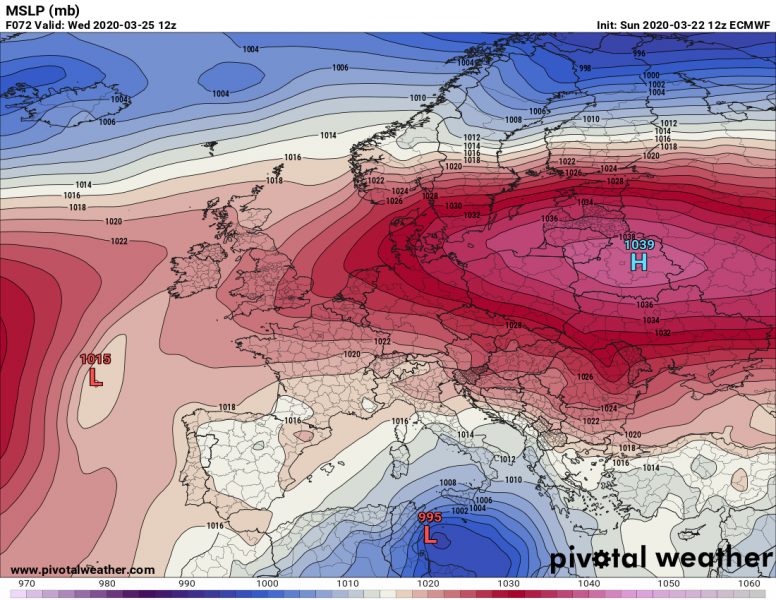 In response to a strengthening upper ridge and the surface high-pressure system tonight, the upper low over northern Balkans deepens and results in even stronger cold advection into the region through Monday and Tuesday. The following days will be *very* cold, with very low nighttime and morning temperatures. Combined with very low wind chills, the cold stress will be destructive for blossoming trees and other crops. Where winds can weaken enough, damaging frosts will occur. The cold will also spread far south across the Mediterranean, reaching Algeria and Tunisia on Wednesday. An extreme temperature anomaly is expected across the southern Mediterranean, with more than 12 °C colder air mass than normal – this will also bring some new snow into Algeria! Part of the cold air mass will also continue towards western Europe, so expect very cold mornings with frost also across Benelux and England and Wales! 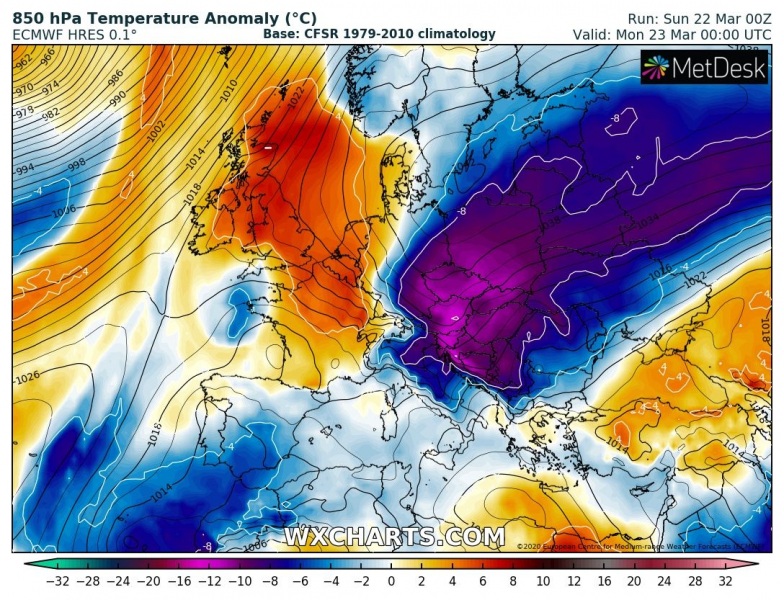 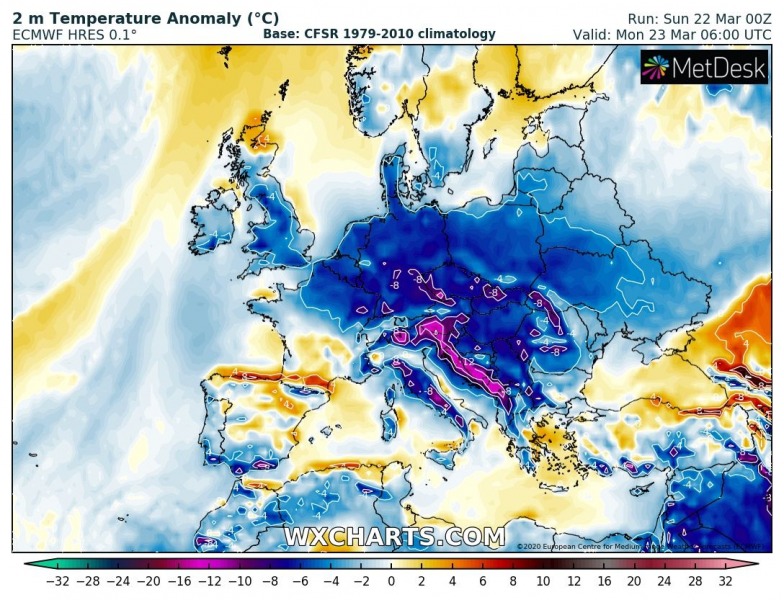 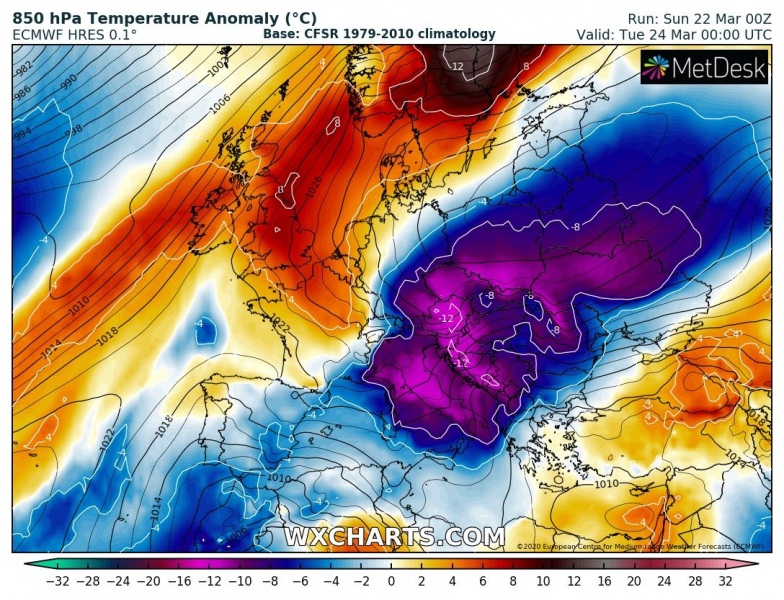 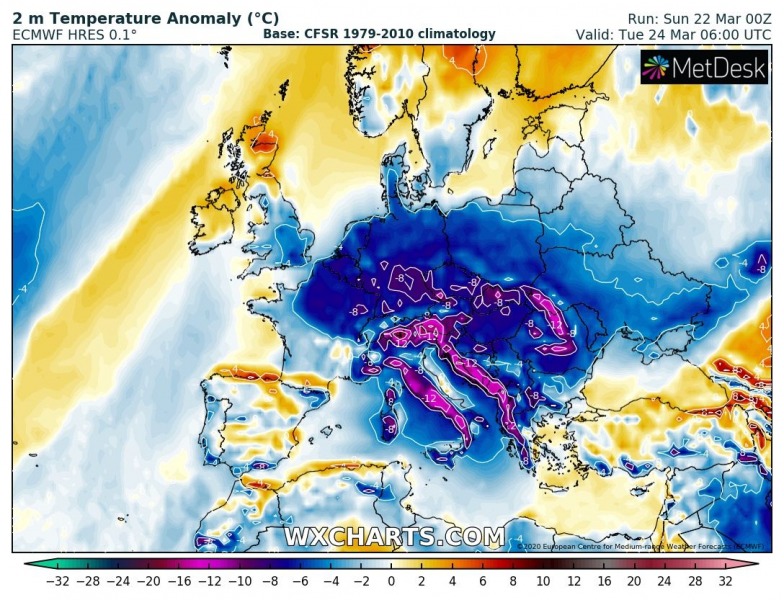 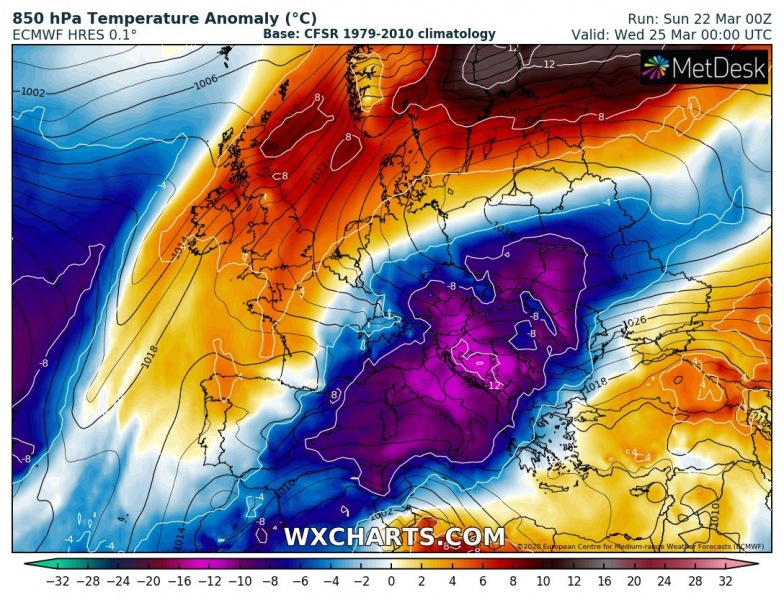 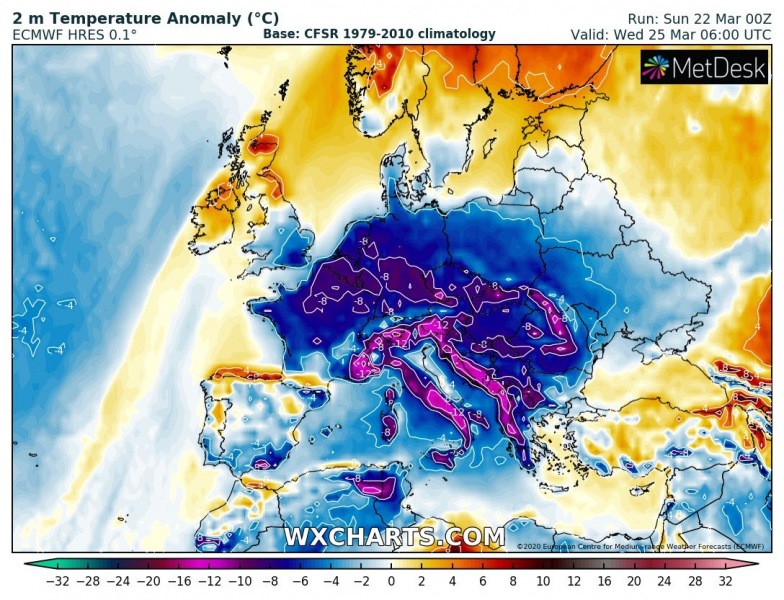 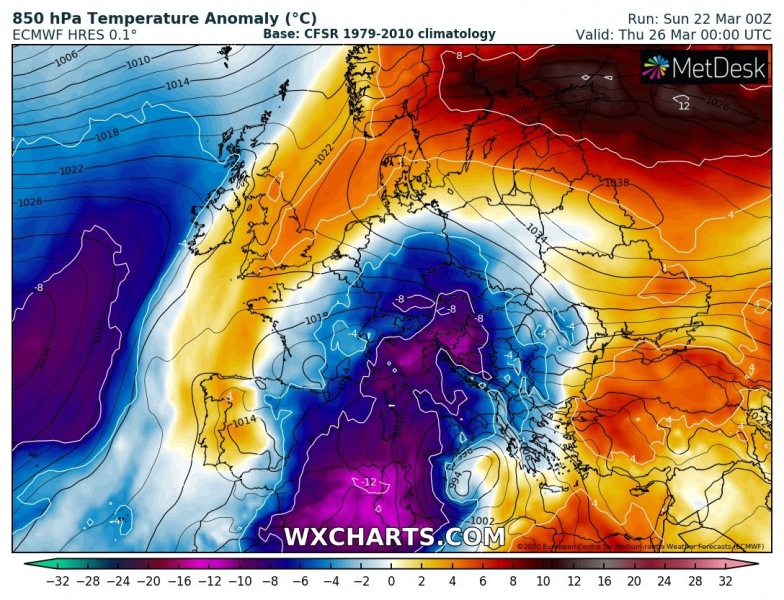 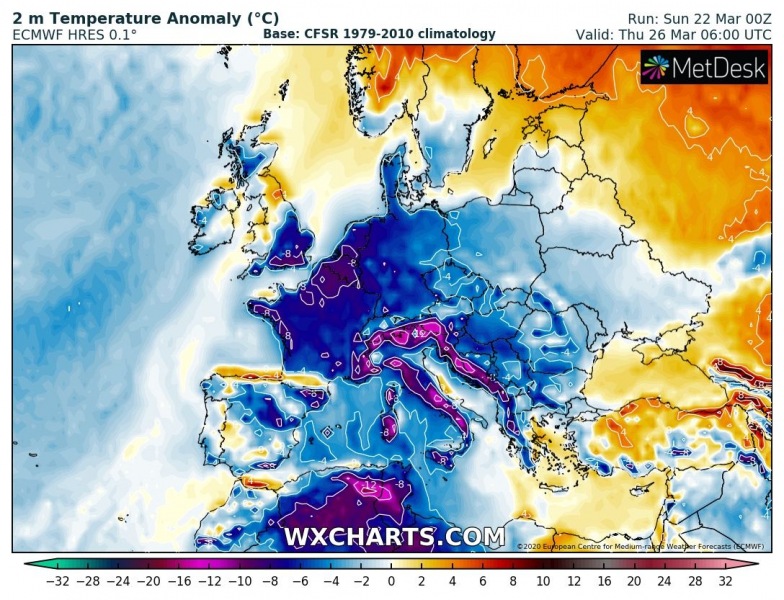 Share on TwitterShare on RedditShare on FacebookShare on PinterestShare on WhatsApp
*COVID-19 vs Climate* Global CO2 levels have temporarily stopped rising, likely due to the industry slowdown as the world battles the new Coronavirus
← Previous
Spectacular mesovortices within the core of monster North Atlantic cyclone - the system has matured today and is now moving into Iceland
Next →
Comments are closed.