The end of October will bring impressive dynamics and a significant pattern change across a large part of Europe. Both global models, ECMWF and GFS, are hinting at a very deep trough pushed into the west-central Europe from the Arctic region. It appears likely that a strong baroclinic / frontal zone will establish across central Europe and result in a very (extremely) strong temperature contrast between western and eastern Europe. More than 10 °C colder than average to its west and possibly nearly 15 °C warmer than normal to its east side.

Let us take a look at details with side-by-side comparison of GFS and ECMWF models. Both agree quite well in the first 5 days, after that some minor details are yet to be determined.

The overall pattern starts changing in the next two days as the ridge over the northern Atlantic starts strengthening while a trough is pushed from the northern towards eastern Europe. This will advect very cold airmass across the Baltic region into the northern Balkans. To the west, strong NW flow in between the Atlantic ridge and east European trough will bring much warmer weather into west and central Europe again, while strong Foehn effect winds are likely across the Alps and N Italy. A very warm day is also expected over British Isles and Ireland on Wednesday. 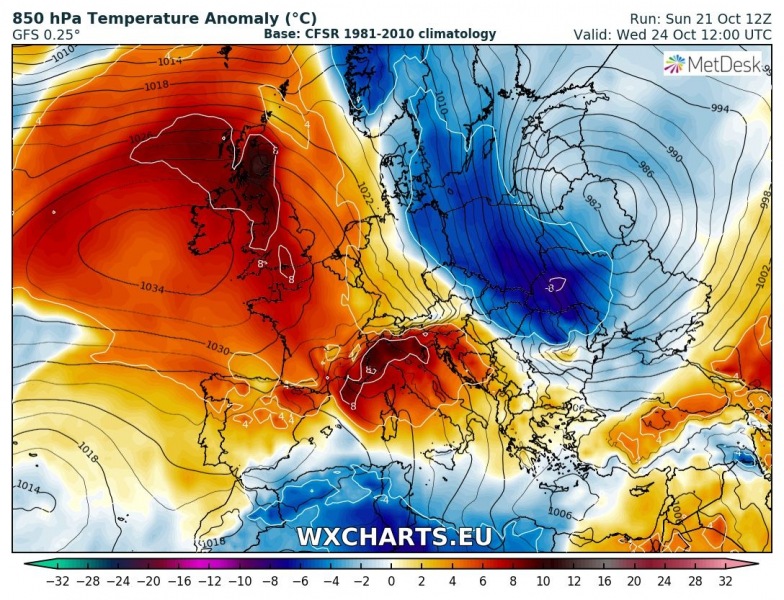 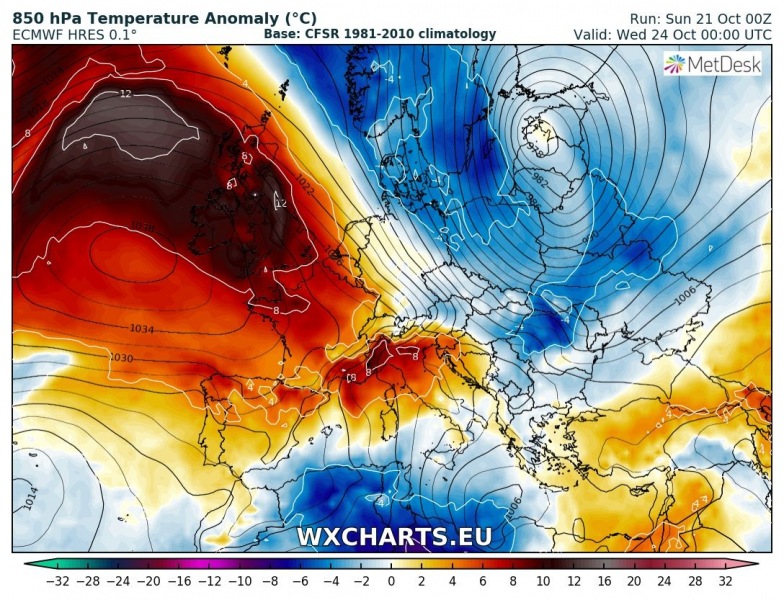 The first outbreak of very cold (Arctic) airmass continues across the eastern Europe, the Balkan peninsula, Black Sea and reaches Turkey during the day as well. Very warm weather remains over west, southwest and central Europe. 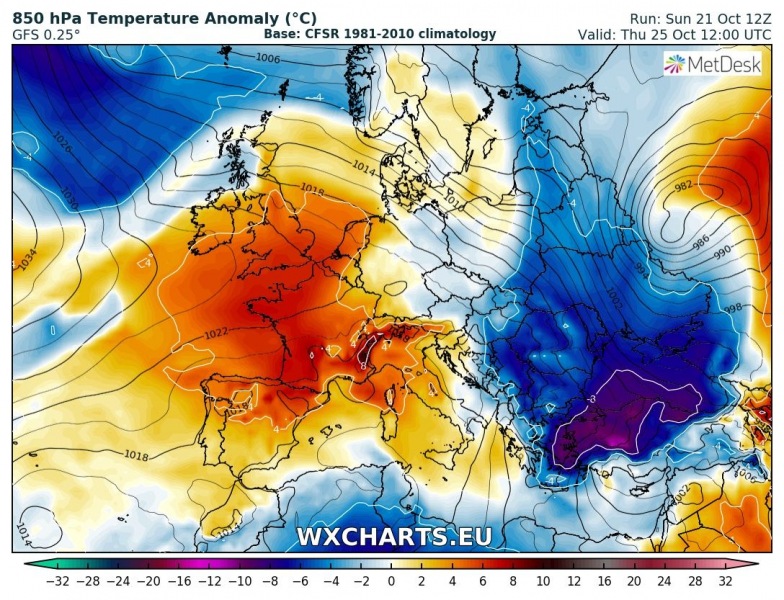 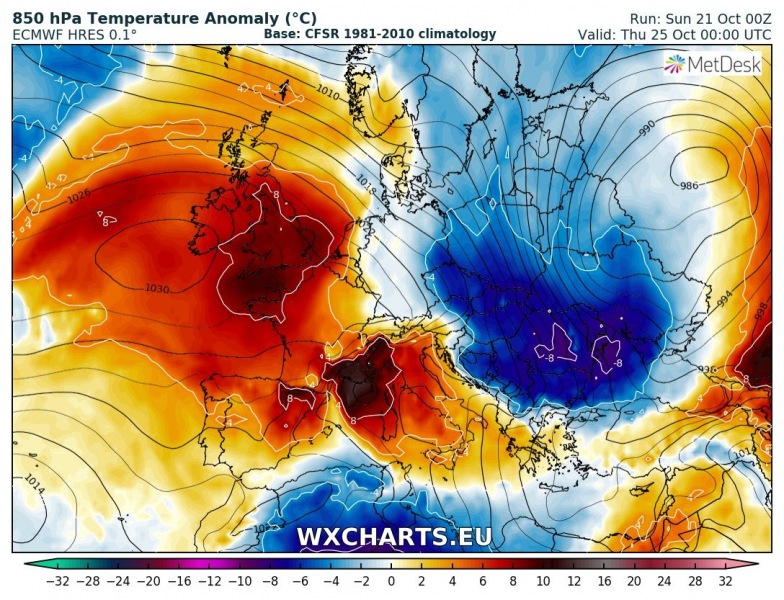 The upper ridge over the N Atlantic and western Europe moves into central Europe in response to a deepening trough from the Arctic region moving towards the south. The eastern European trough dissipates, while very cold airmass remains over Turkey and SE Mediterranean. 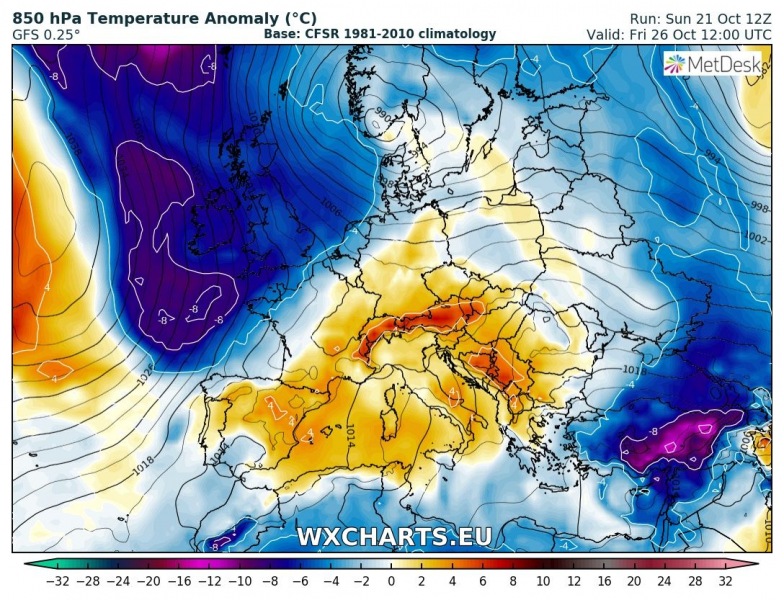 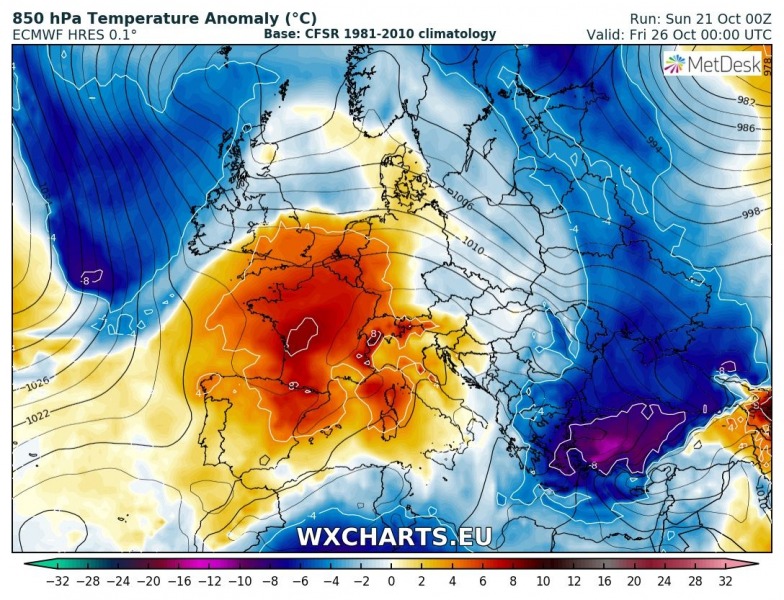 A strong dipole pattern develops across Europe with a strong baroclinic / frontal zone stretching across central Europe. An Arctic outbreak rapidly moves across western Europe towards the Iberian peninsula, while strong warm advection takes place from the Mediterranean region into central Europe and the Balkan peninsula. This results in a sharp temperature contrast between west and east Europe. GFS is more aggressive with the Arctic outbreak and also with the temperature contrast. 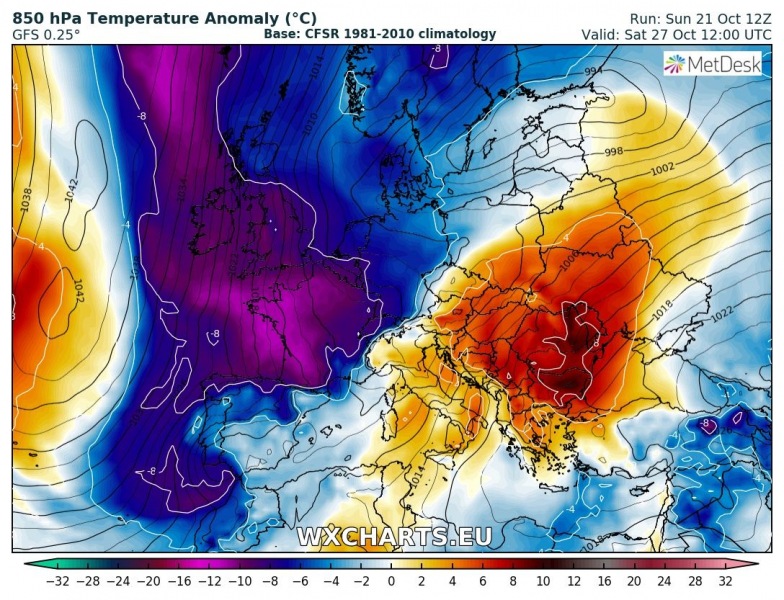 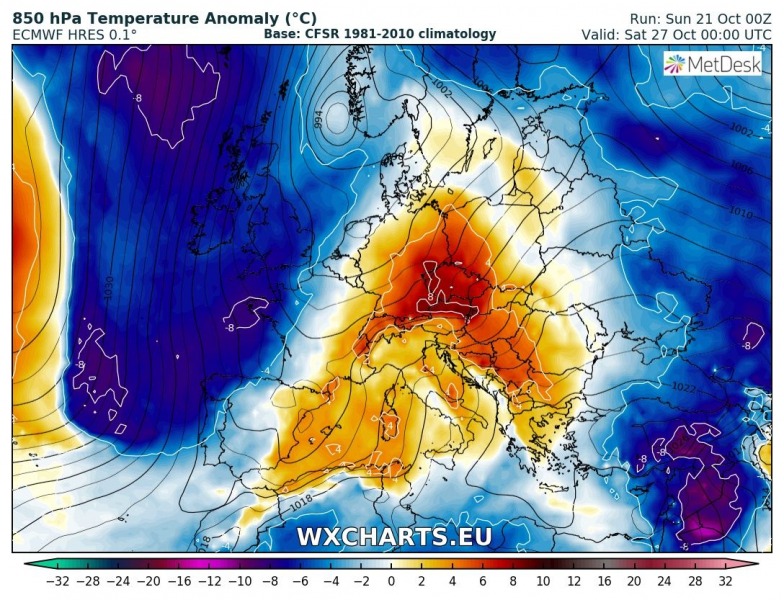 Both models are hinting at sharpening of the frontal zone with a rather extreme temperature contrast between west and east Europe. While there is around 10-12 °C colder than average airmass over west-southwest Europe, there is 10-12 °C warmer than average airmass over the east and central Europe. A cyclone in between and the associated cold front will likely bring severe weather with intense thunderstorms and possibly flooding events! 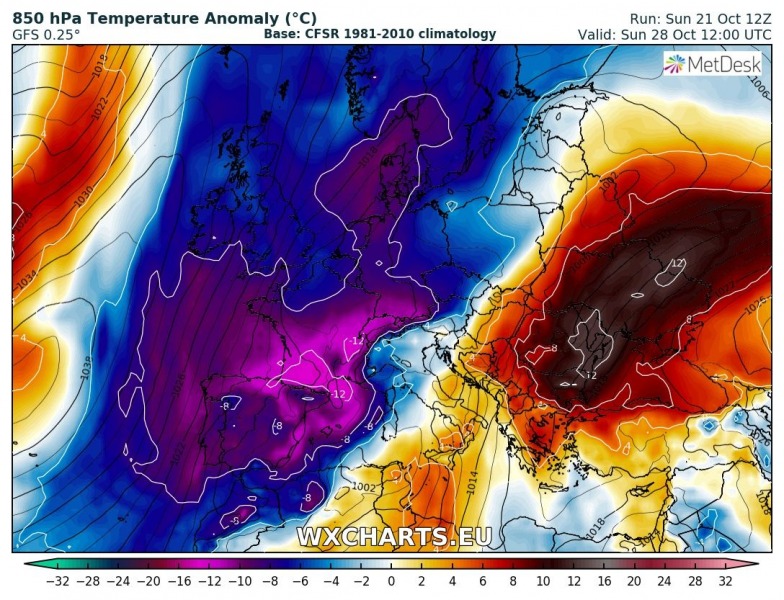 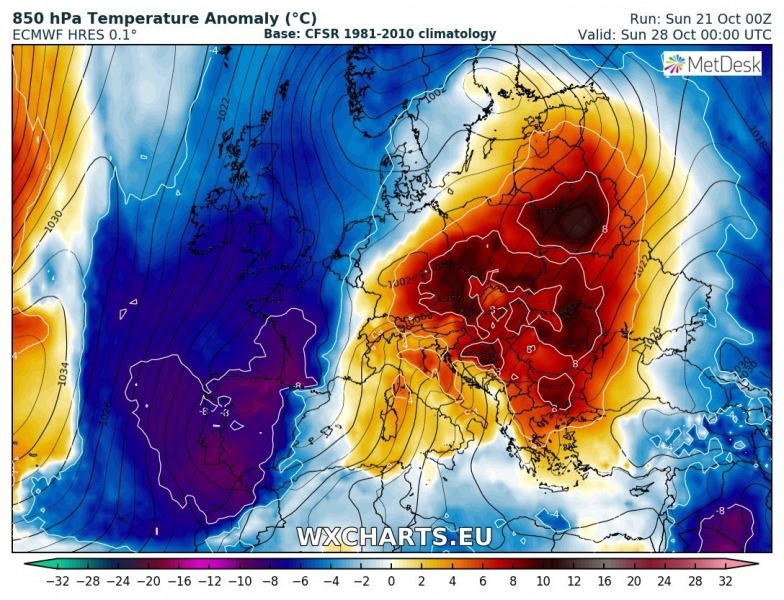 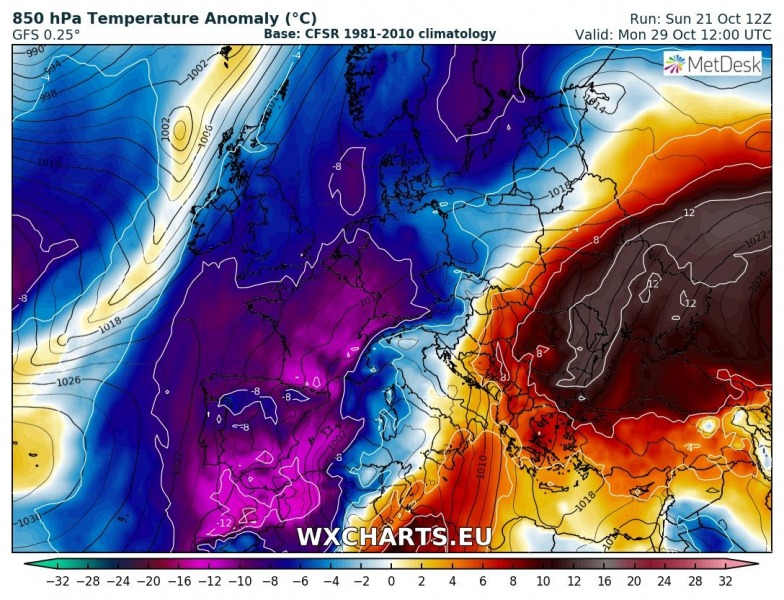 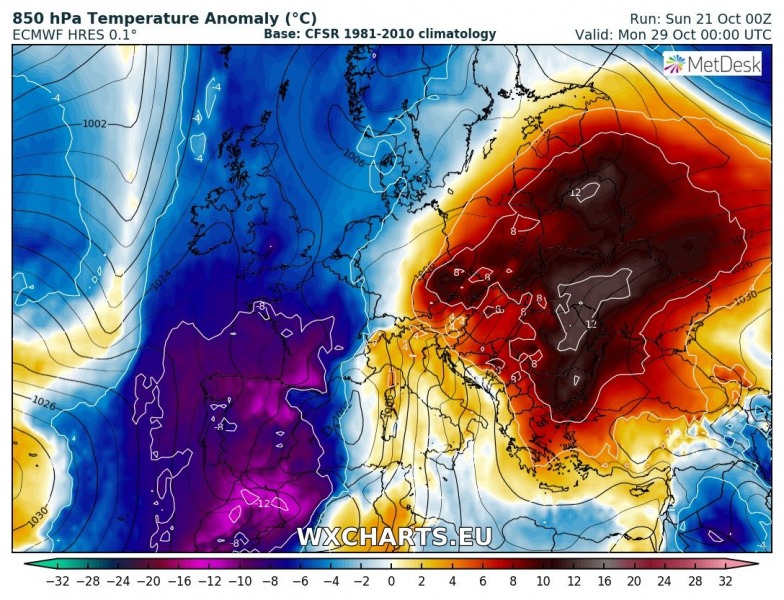 The frontal zone moves further east and a strong cyclone is likely to develop over the northern Mediterranean. Exceptionally warm weather spreads across E Europe with temperatures more than 12 degrees Celsius warmer than normal. The Arctic airmass to the west of frontal zone and cyclone continues spreading across western Mediterranean towards the Alps and Italy. Very cold weather remains over Algeria and surroundings. 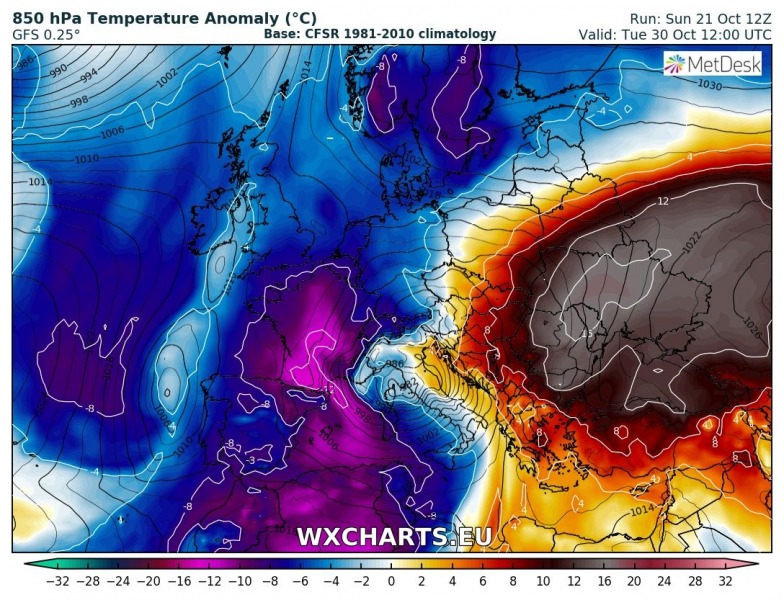 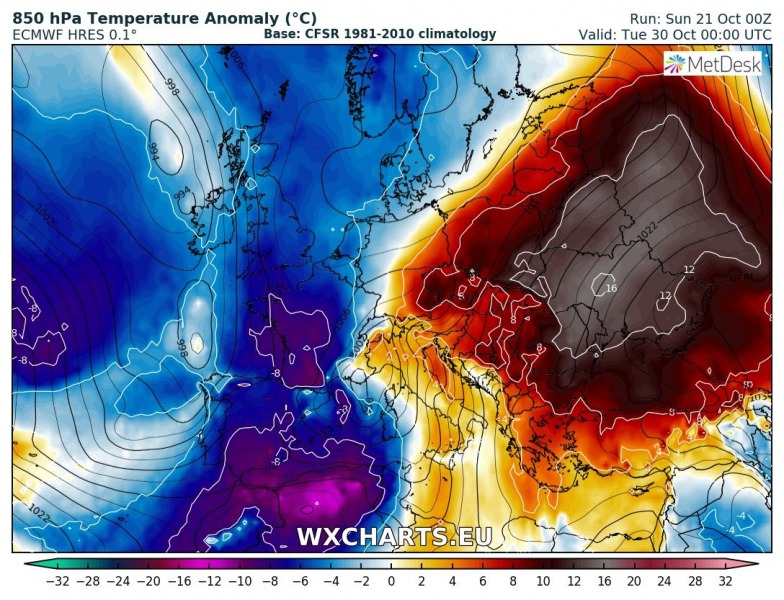 We will have further updates on separate setups in the coming days, as well as more details about this significant pattern change and Arctic outbreak – stay tuned!

Share on TwitterShare on RedditShare on FacebookShare on PinterestShare on WhatsApp
Cutoff low will bring thunderstorms, torrential rainfall to central Mediterranean over the next 2-3 days (Oct 22-24, 2018)
← Previous
Major borderline Category 5 hurricane in eastern Pacific, expected to make landfall in Mexico tomorrow
Next →
Comments are closed.