The Friday evening model guidance regarding the cold outbreak scheduled for mid next week – early February. Ensemble models are is a fairly good agreement for a few days event, despite the latest solutions are hinting the strongest outbreak across east-central Europe and the Balkans, also over the south Mediterranean and northern Africa. The cold outbreak will likely be pretty intense over the western Balkans and the south-central Mediterranean, replacing the extremely warm air mass developing this weekend and lasting until the sharp cold front on Wednesday.

Here is the GFS vs. ECMWF comparison over the few days – both are actually in very good agreement. We can see the outbreak develops over western Europe – UK, Ireland, Benelux and France on Tuesday, spreading across east-central Europe on Wednesday, also into the Mediterranean. It intensifies on Thursday over the Balkans and the Mediterranean, already reaching North Africa. Meanwhile, warmer air mass already returns into western Europe while cold outbreak continues across the Balkans, the Black Sea region and North Africa, reaching also the eastern Mediterranean late Thursday. It appears likely the cold outbreak will be quite intense over the Balkans and the Mediterranean with very low wind chills. 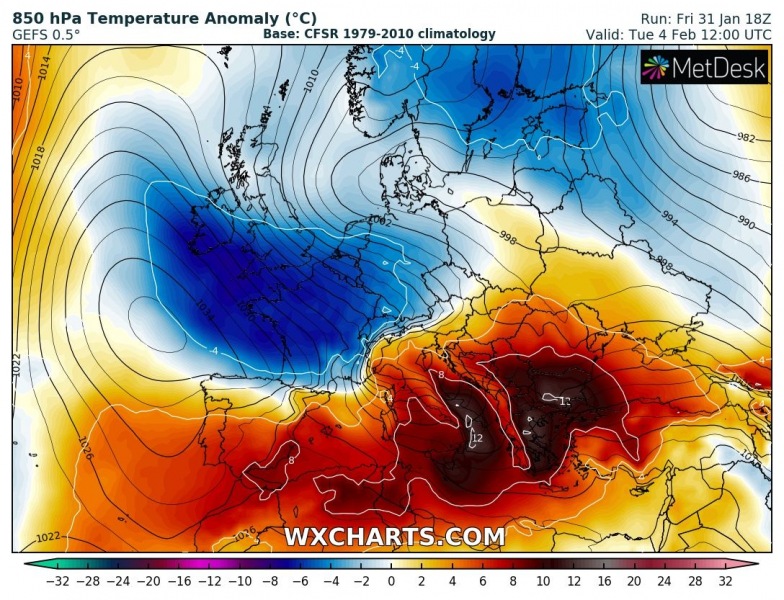 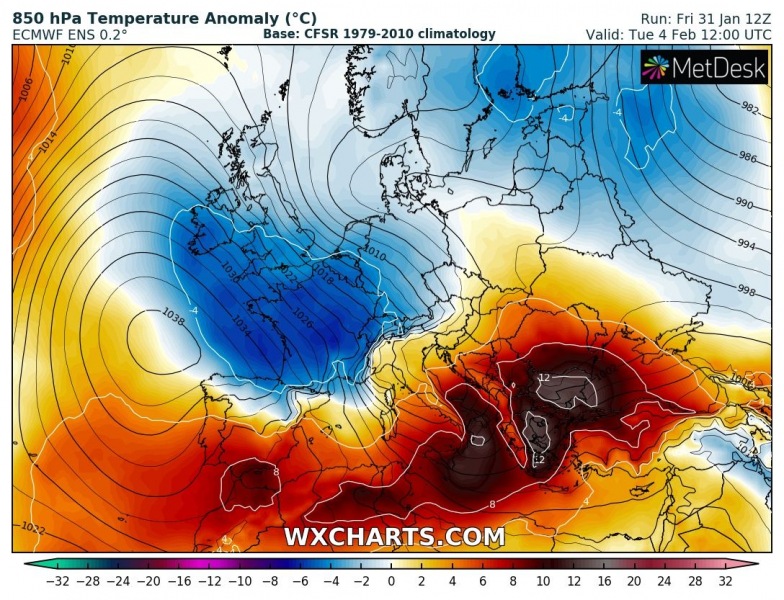 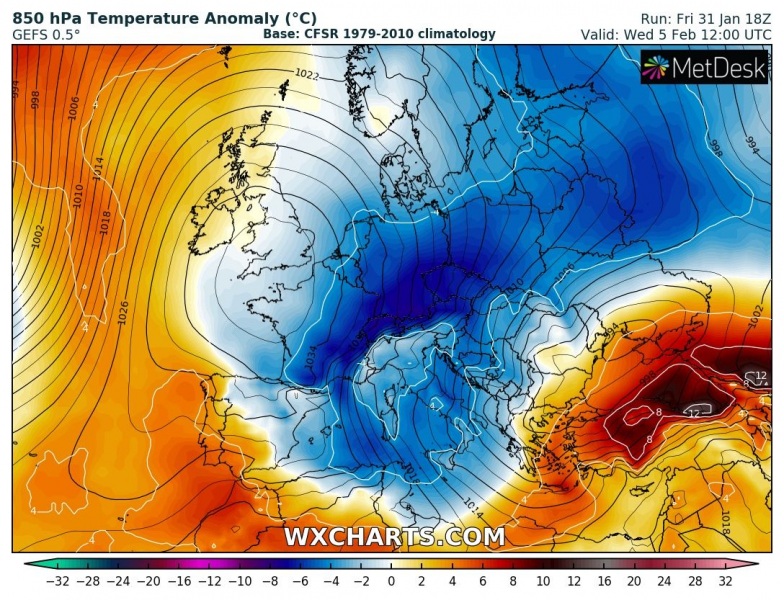 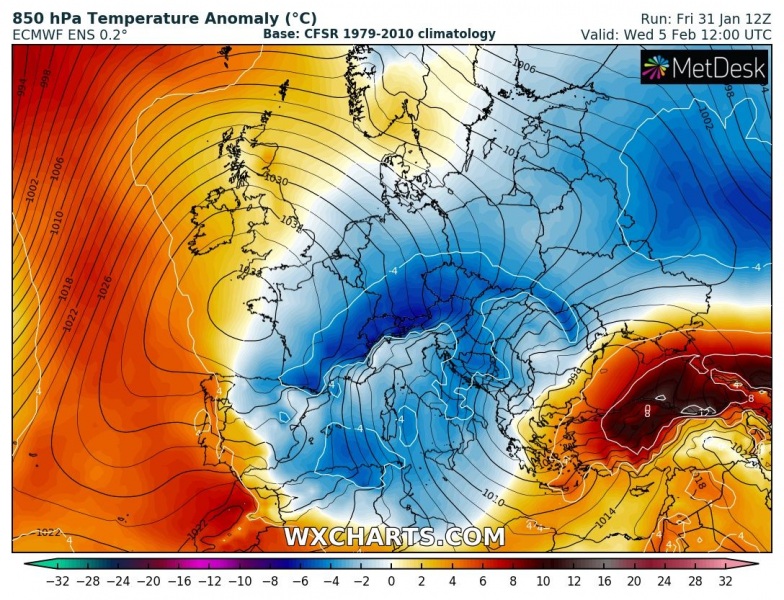 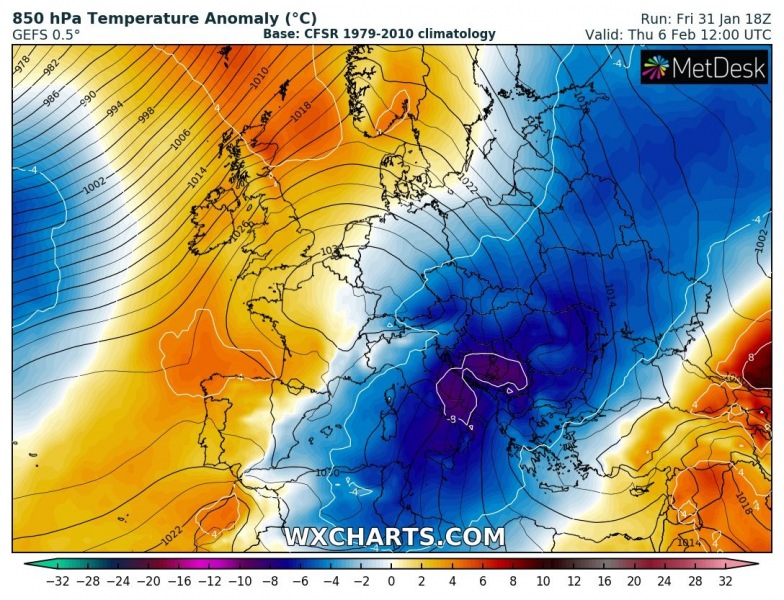 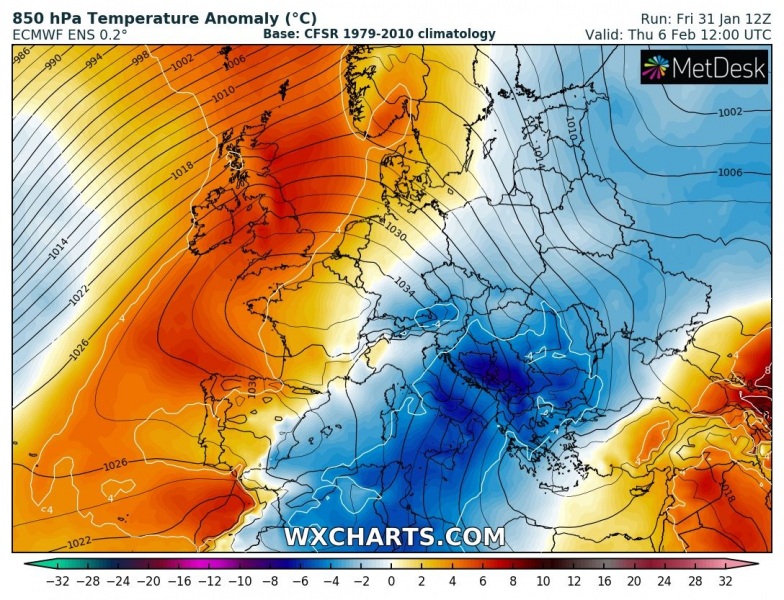 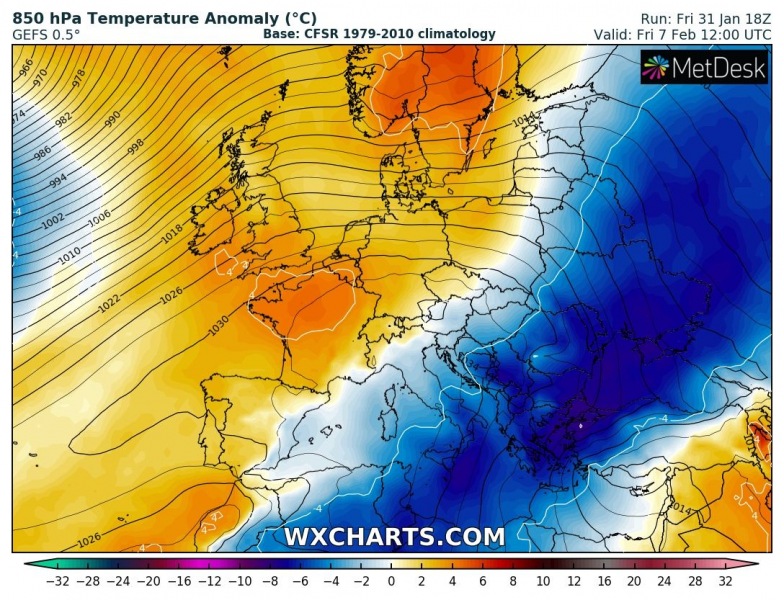 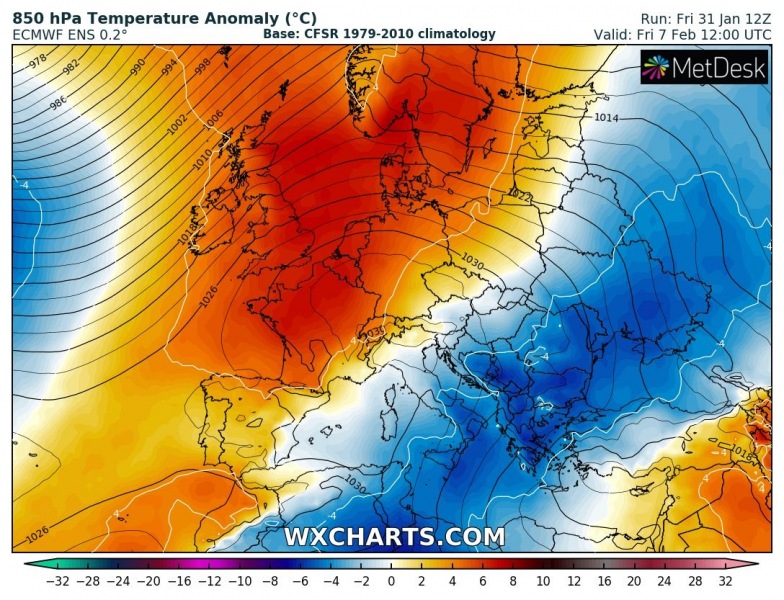 Although it will be relatively short, the cold blast is greatly visible of meteograms across Europe. The latest model guidance is leaning more into the GFS model solution – the means the stronger upper-level ridge over the North Atlantic and western Europe, so the core of the cold outbreak is pushed more east than previously simulated. But remains very strong across eastern Europe and the Balkans. Attached are graphs for Cork (Southwest Ireland) and Munich (southern Germany). While air mass changes for ‘only’ around 10 °C in south England, the cold outbreak is much stronger across central Europe – Munich indicated around 15 °C change. 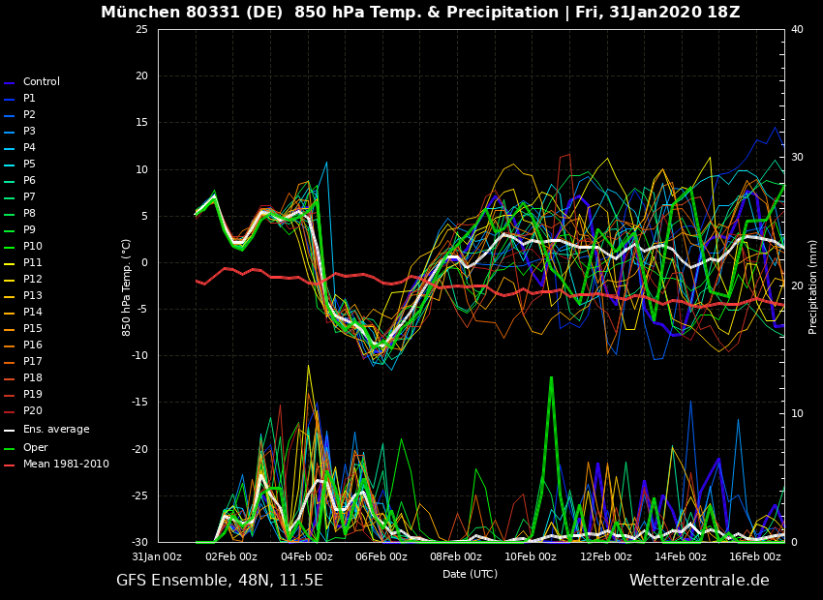 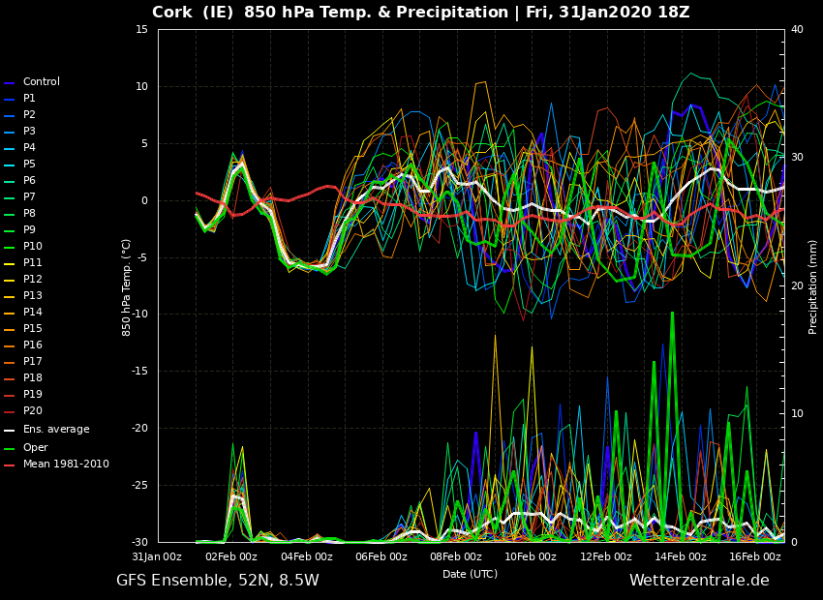 The cold blast and the surface front will be particularly sharp across the Balkans, the Mediterranean and northern Africa (Tunisia, Libya), as extremely warm air mass will be replaced by very cold air mass with a temperature change of more than 15 degrees in about 12 hours. Attached are comparison meteograms for Sarajevo (Bosnia & Herzegovina), Athens (Greece) and Tunis (Tunisia, northern Africa). Sarajevo and Tunis bring almost 20 °C change! 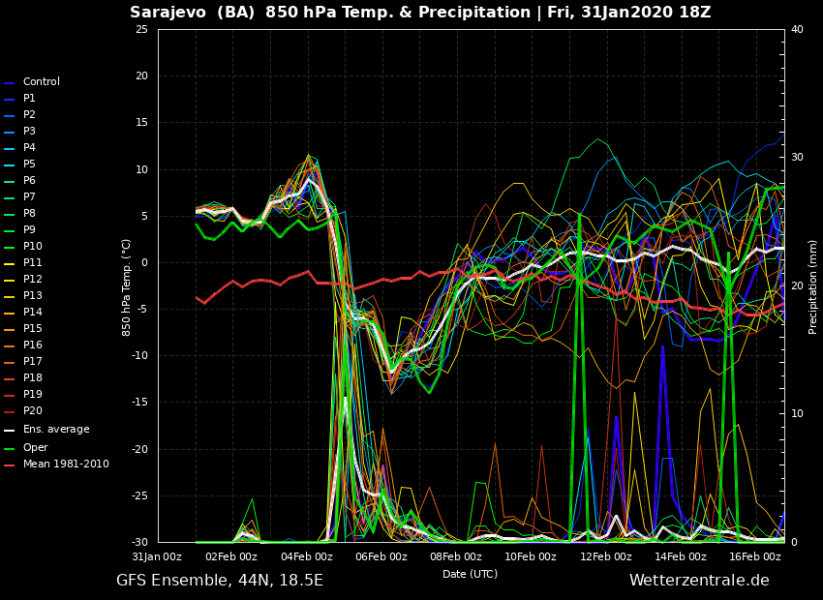 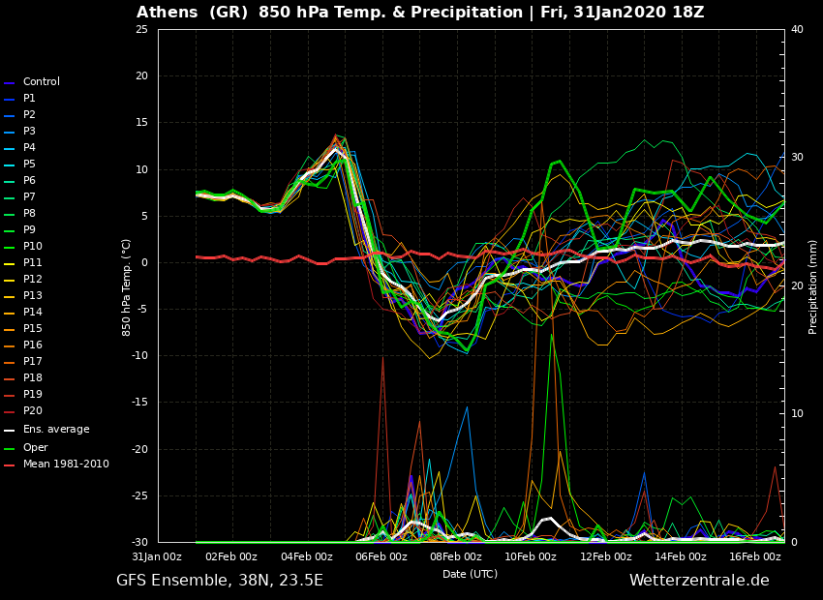 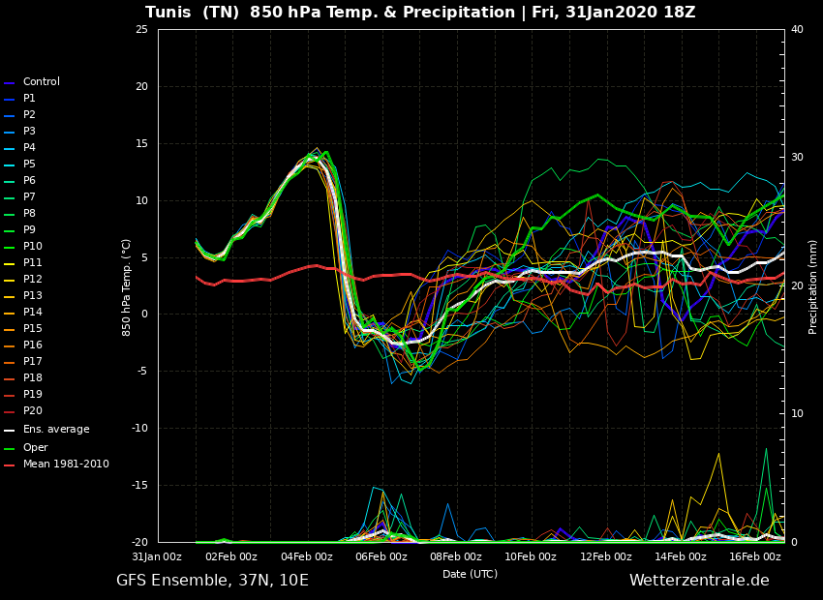 The more or less classic pattern during the second half of the week brings locally excessive snowfall across the western Balkans. With strengthening high-pressure system across central Europe and deep trough / low over the southern Balkans, northeasterly flow in between results in persistent orographic snowfall along the Dynaric mountain range – locally more than a half-meter (50+ cm) of snow will be possible. 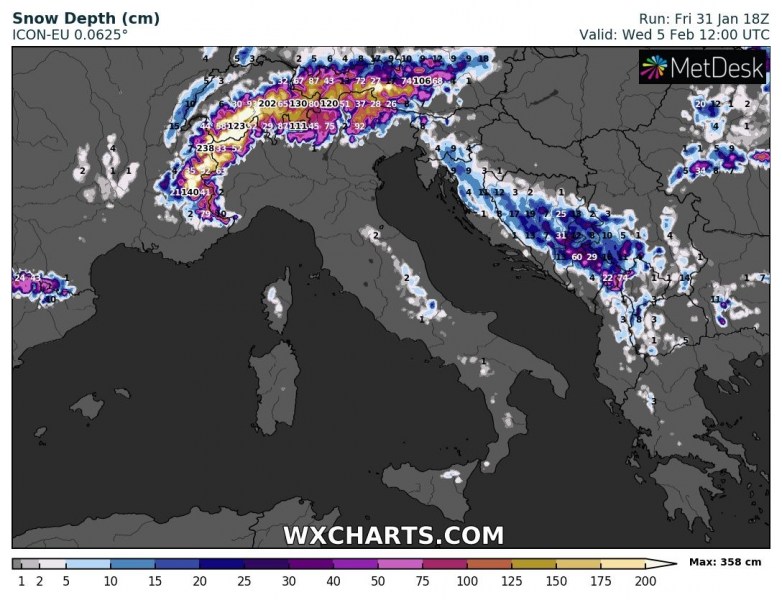 As we can see, at least temporal (3-5 days) cold outbreak is expected through early February, finally flushing away the mild temperatures. It will probably be quite intense over the Balkans and Mediterranean, slightly less robust than previous guidance over western Europe. We will be closely monitoring the evolution in the coming days, so stay tuned for further updates.

Before the cold outbreak starts, an extreme temperature anomaly spreads across south-central Europe and locally brings near +20 °C daytime temperatures!

See the previous discussions regarding the cold outbreak:

Share on TwitterShare on RedditShare on FacebookShare on PinterestShare on WhatsApp
Week 15-2019 (Apr 08th – Apr 14th) Contest Winners
← Previous
A new violent and rapidly deepening extra-tropical cyclone over the North Pacific, dominating the whole region this weekend
Next →
Comments are closed.