The very dynamic pattern over the North Atlantic does not take any breaks this winter. Again, a monster extratropical storm has developed overnight, pushed its central pressure below 940 mbar by Wednesday morning – a bombogenesis process has resulted in an extreme pressure drop. The storm has generated major waves. Those will, together with the large swell, spread into the western and southwestern Atlantic coast of Europe on Friday.

Yet another intense and extremely deep North Atlantic extratropical storm has formed today, Wednesday, Dec 16th. Its central pressure has dropped for more than 50 mbar over the past 24 hours. The system has peaked by late morning hours and mature its structure, looking very impressive on the satellite imagery.

The water vapor scan has revealed the textbook structure of the dry conveyor belt wrapped around the core of the low. Notice also there were small eddies – Meso vortices visible along the edge of the conveyor belt. 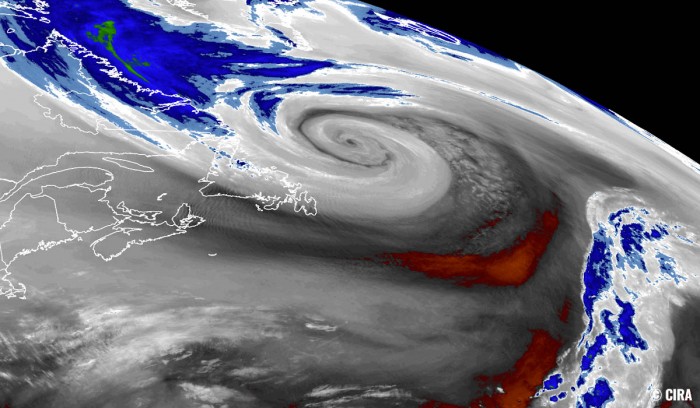 Such pressure change also means that the system is classified as a bomb cyclone – a system that is intensifying very rapidly. Bomb cyclones form when explosive cyclogenesis (or bombogenesis) with the rapid deepening of its barometric pressure occurs.

The extratropical storm has grown quite big, dominating a large part of the North Atlantic, moving northeast. Its wide side is producing severe to extremely severe winds, generating massive waves and swell. Both are moving towards east-southeast and will reach Ireland, France, Spain, and Portugal by Friday through Saturday.

The satellite animation of airmass, water vapor and infrared channels revealed a quite spectacular development of this extratropical low through Wednesday:

Monster 15-20 meter waves could result in the famous ‘giant wave’ spot in front of Nazaré, Portugal.

Satellite imagery this Wednesday is revealing a very impressive structure of the storm. The mature stage has shown a very large core, surrounded by a broad cold maritime air mass. We can also see a lot of Arctic cold air mass being advected from eastern Canada into the Northwest Atlantic in the wake of the storm. 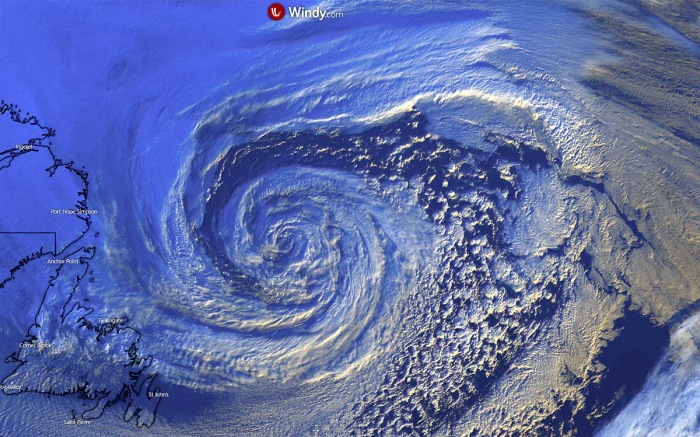 Attached below are additional satellite scans of the storm during its final bombogenesis process, continuing into the North Atlantic as a mature extratropical storm. Its structure was quite spectacular at the peak intensity, with the cloud bands symmetrically wrapped into a tightening core this morning.

This is also the reason why the central pressure has dropped so extremely low. 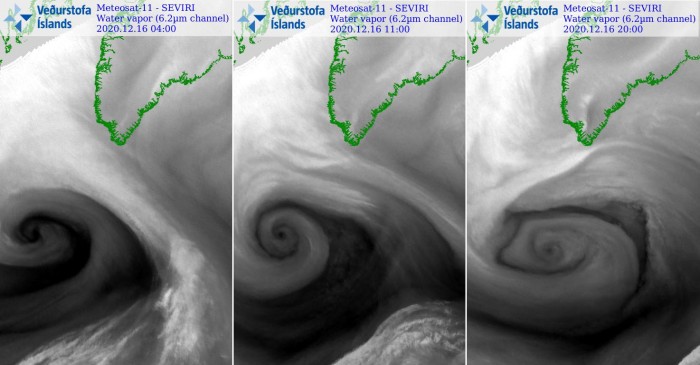 A similar view from the Airmass satellite channel today: 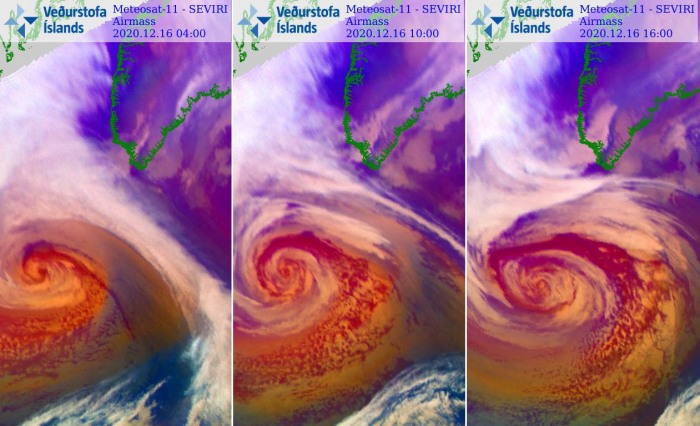 As said, the central pressure of the low has deepened to 938 mbar by Wednesday morning local time (12 UTC).

Below are the surface analysis data for the mean sea-level pressure estimates by the NOAA Ocean Prediction Center (OPC). The surface pressure analysis reveals the extratropical storm evolution from its birth south of Newfoundland in the Northwest Atlantic on Tuesday morning, very rapidly growing its size and intensity over the past 36 hours. 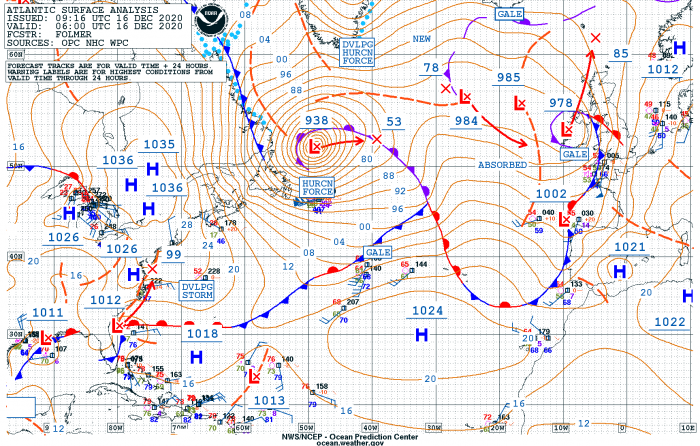 As we can see from the pressure analysis above, the central pressure in this extratropical storm had an impressive 55 mbar drop over the 24-hour period between Tuesday 00 UTC and Wednesday 18 UTC. And also 53 mbar pressure drop within the 06-06 UTC period this morning. Impressive!

That is indeed well beyond the threshold for explosive cyclogenesis and its pressure change was pretty remarkable – more than two times higher than the official definition for rapid intensification – a 24 mbar pressure drop over the past 24 hours!

This new North Atlantic extratropical storm has become a very violent system, bombogenesis process has been completed around 12 UTC on Wednesday. The system is now mature and moving across the open North Atlantic towards Europe.

This is a rather classic pattern during winter months for the North Atlantic, as intense Arctic outbreaks from Canadian Arctic and Greenland penetrate onto the warmer North Atlantic. Explosive cyclogenesis is often the result. As it happened this week, very rapid intensification of the extratropical storm has occurred near Newfoundland.

While the models were not even picking up the proper sea-level pressure forecast, the analysis revealed the pressure was below 940 mbar during Wednesday morning hours. Then, the storm has matured and it now continues further east while expanding its size.

As of Thursday, its size will be very large and expand across most of the North Atlantic. The central pressure will continue rising and is expected to be around 955 mbar by Thursday afternoon hours. We can see a very tight pressure gradient around the storm, resulting in severe winds. 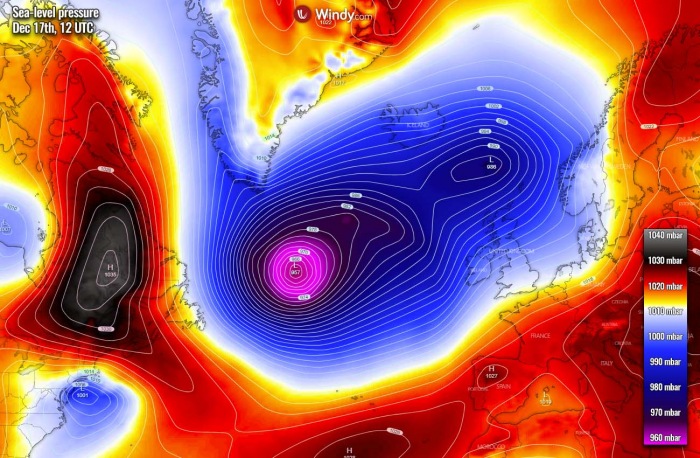 With the system’s progress further east, the pressure will continue rising above 970 mbar by Friday afternoon again. However, the extratropical low will remain very large, its center will be about a few hundred kilometers to the west of Ireland. 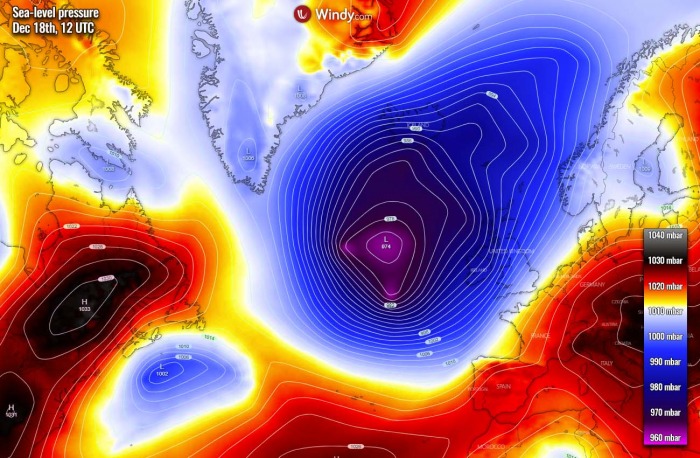 The tight pressure gradient will remain, being supportive of severe winds and generating major waves/swell.

MASSIVE WAVES ON THE WAY TOWARDS IRELAND, FRANCE, AND IBERIA

Although the system is now past its peak intensity, it remains a very large North Atlantic low. It has developed a broad channel of severe to extremely severe winds, gradually expanding east with the progress of the storm.

The strongest winds are being observed today, on Wednesday, as also the strongest pressure is present as we have seen above. 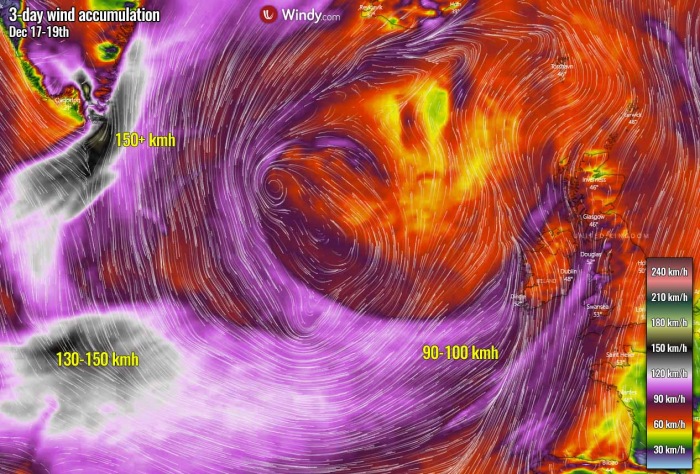 Peak wind gusts are reaching hurricane-force speeds, close to 150 km/h near the center of the low. These winds will be gradually vanishing with time with the eastward movement of the storm but will remain severe.

Some of these will also spread towards Ireland, Wales, southwestern England, and the Bay of Biscay.

The tight pressure gradient on Wednesday evening has generated high waves, close to 14 meters to the south of the low. High waves are also being generated to the north of the low, across the southern portions of the Labrador Sea. 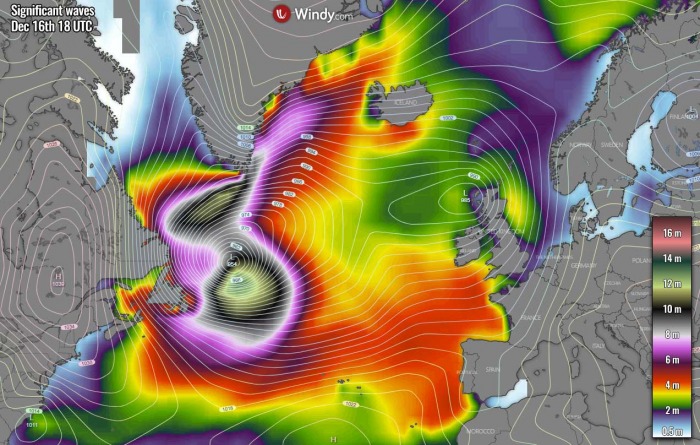 As the extratropical low moves further east over the North Atlantic, waves will maintain major heights and expend across broader areas with time through Thursday. This will also result in a rising swell towards Europe. 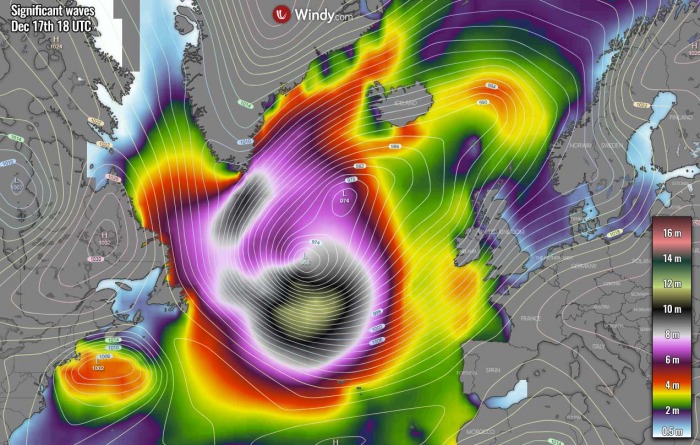 Major waves will reach the Bay of Biscay on Friday, as well as spreading towards Ireland, southwestern England, western France, Portugal, and northern Spain through Friday night into Saturday. Although the winds and therefore waves will be lower, they will spread across a much broader area. 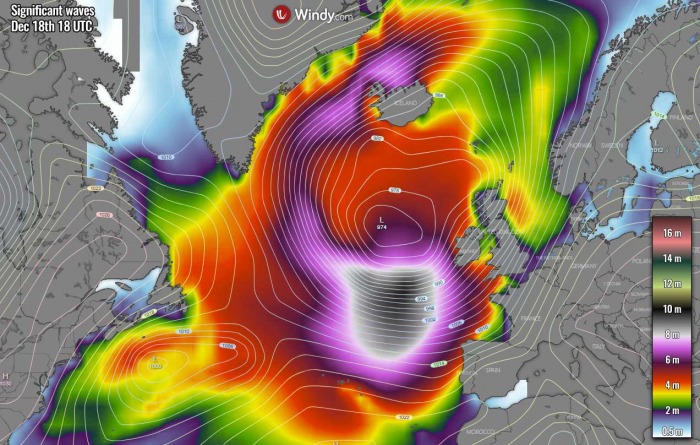 Huge swell will be associated with this system, so expect significant waves along these coasts when it arrives overnight to Saturday.

Share on TwitterShare on RedditShare on FacebookShare on PinterestShare on WhatsApp
A Category 5 Tropical Cyclone YASA now heads for an extremely dangerous landfall in Fiji on Thursday
← Previous
*WEEKLY FORECAST* Deep Atlantic lows push an extreme warmth over Europe... but could the pattern finally change and cool down for Christmas?
Next →
Comments are closed.