A pronounced low-pressure system travels across the UK on Monday’s night, delivering severe winds and colder weather with some snow into Scotland and northern England

The active cyclones over the North Atlantic are being pushed towards western Europe. One of these systems is currently NW of Scotland and will make a turn into the country towards Tuesday. In the meantime, an upper-level ridge will be temporarily strengthening over the North Atlantic and develop cold advection into UK and Ireland on Tuesday. Tight pressure gradient along the surface cyclone will bring severe winds into Northern Ireland, Scotland and NW England, while some snow is likely over Scottish Highlands and also northern England.

At 12 UTC today, Feb 2nd, the system was located northwest of Ireland with a central pressure of 979 mbar. A developing storm-force winds were analyzed on its west side, behind the front. Cyclone will move further northeast until Monday evening, then turn southeast and cross Scotland: 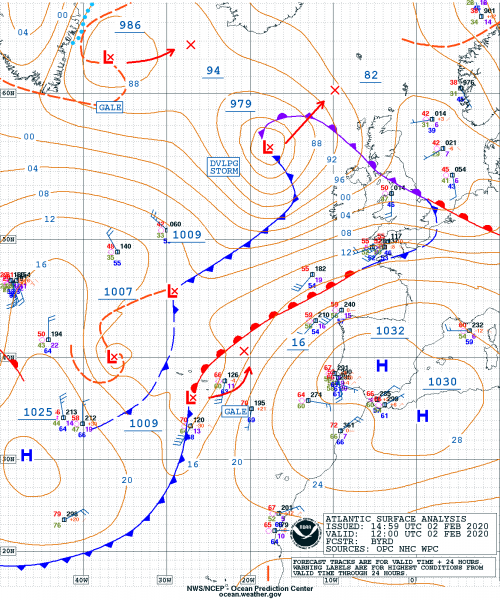 Satellite image of the low-pressure system this evening. We can see a broad maritime air mass is being pushed behind the surface front – that is the cold advection that will spread across the UK and Ireland late tomorrow: 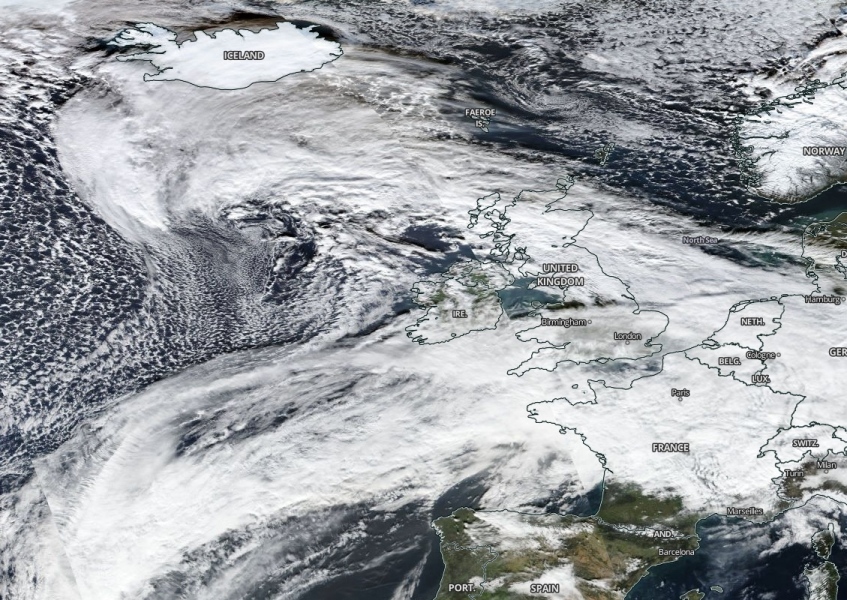 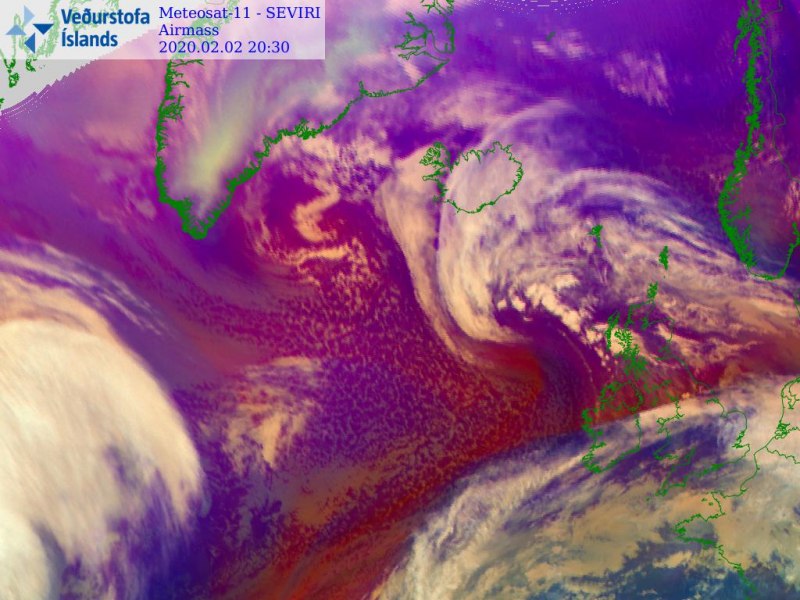 Here is the 6-hour sequence of the cyclone first moving north tonight and tomorrow, then starting its accelerating movement towards Scotland on Tuesday morning. Violent winds are possible near its peak while it is still far NW of Scotland on Monday evening. The system will cross Scotland on Tuesday and already being across by early afternoon: 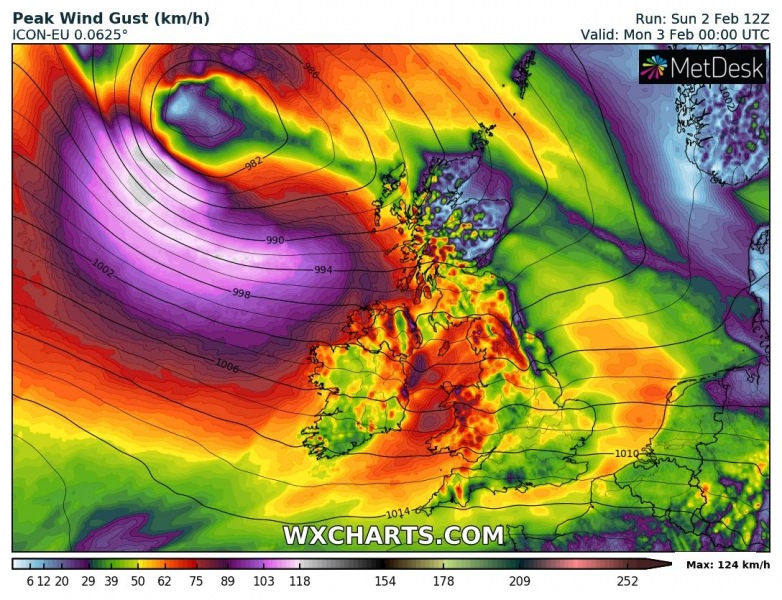 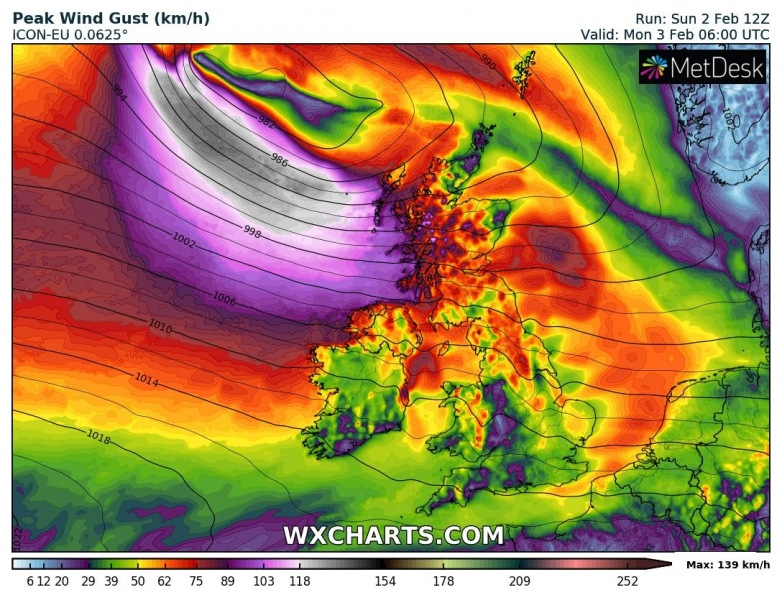 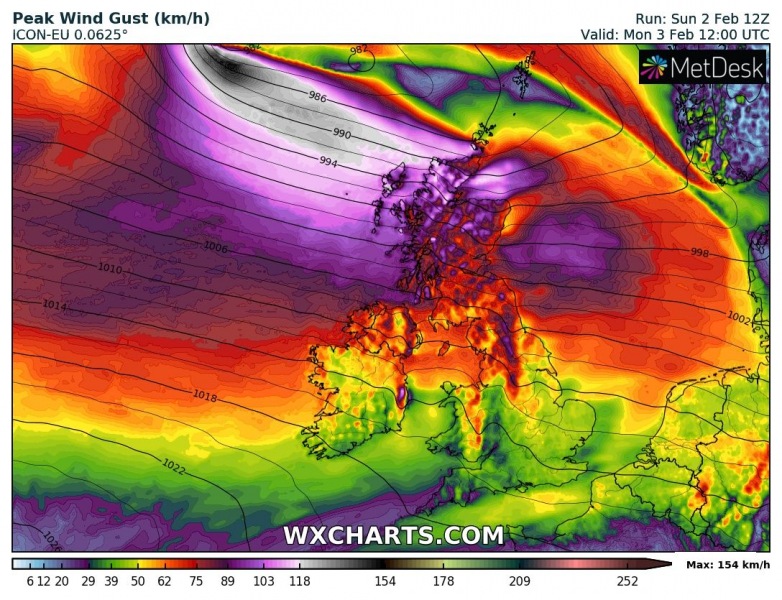 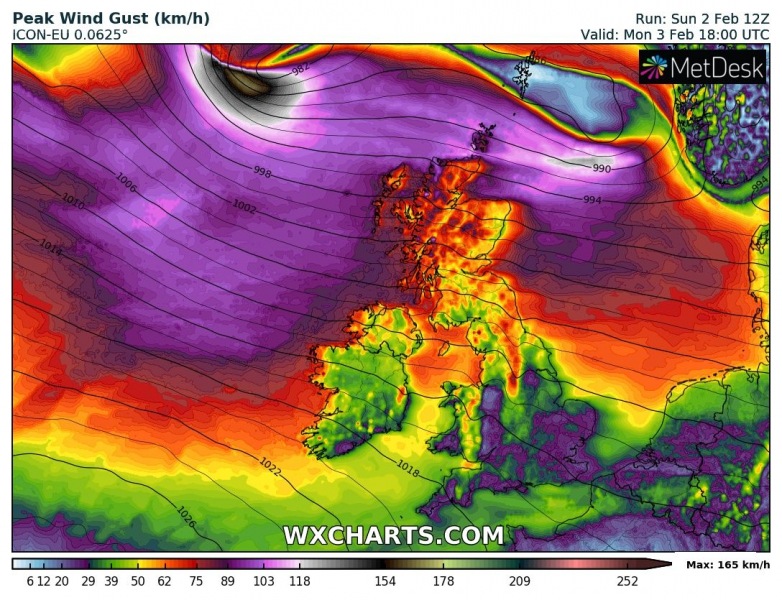 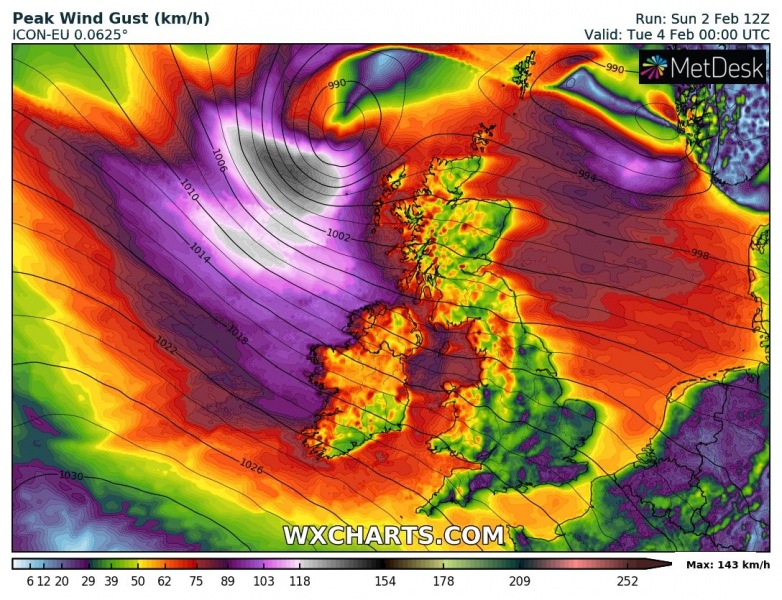 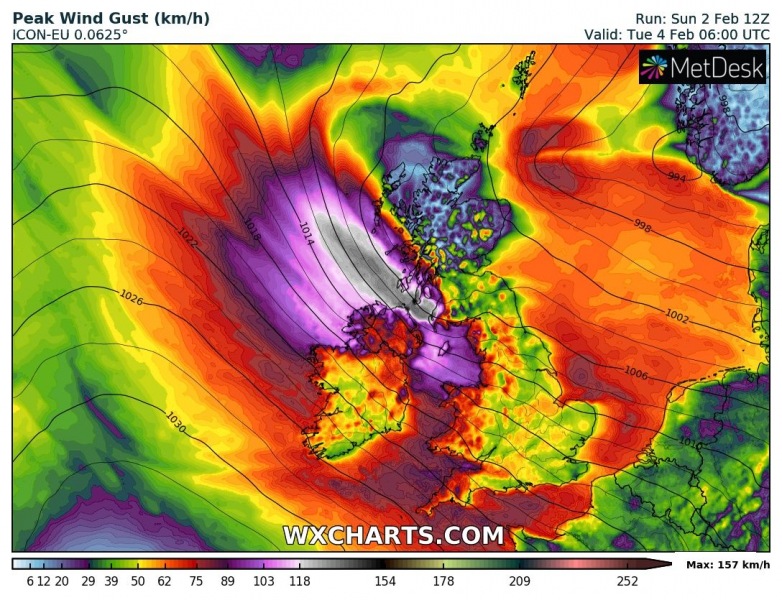 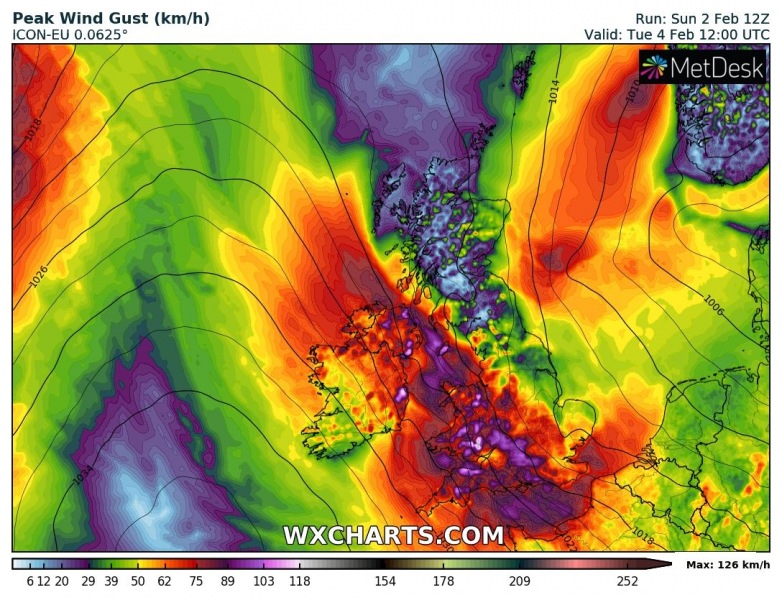 In the meantime, cold advection behind the main cold front is already being pushed towards the UK and Ireland, reaching south England by Monday early afternoon. Colder temperatures will then spread further southeast into Benelux and become even lower over the UK. Notice the warmer core of the cyclone while it is approaching Scotland on Monday’s night: 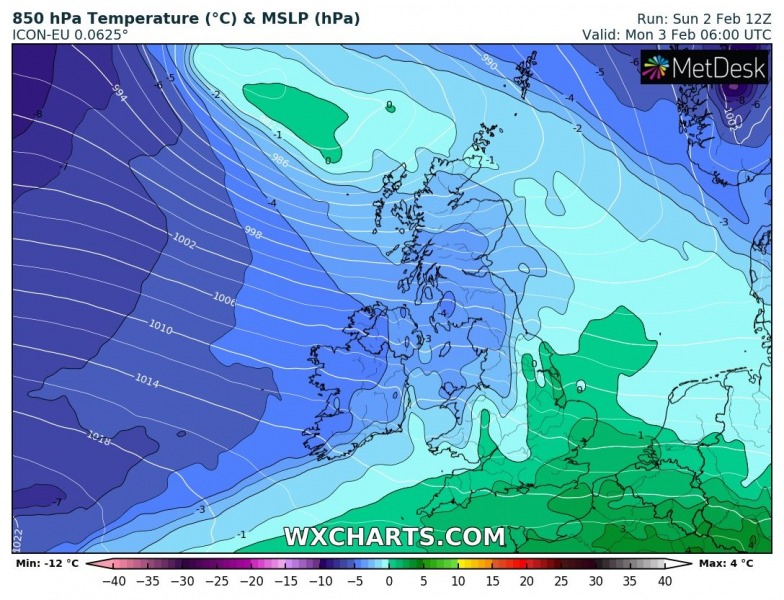 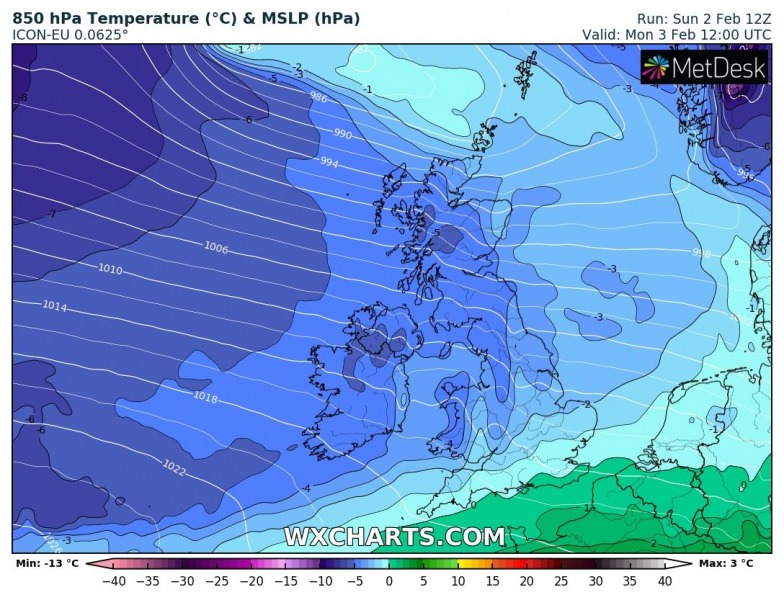 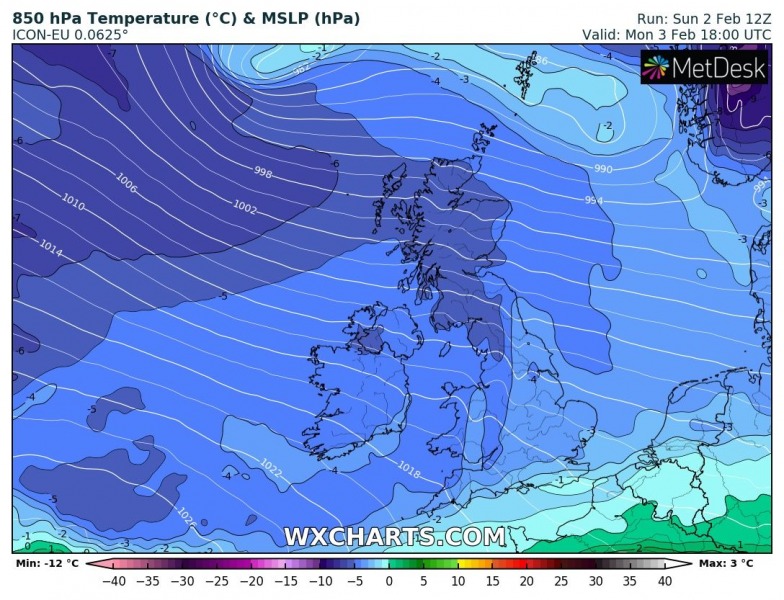 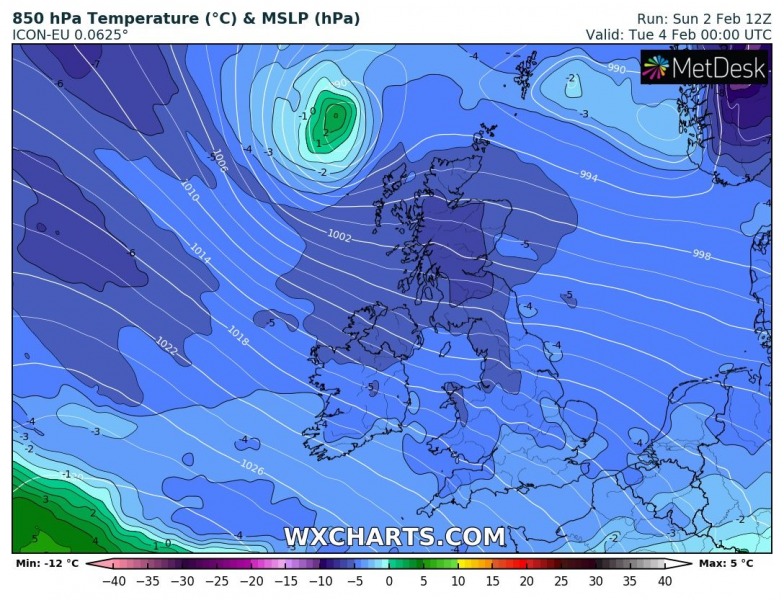 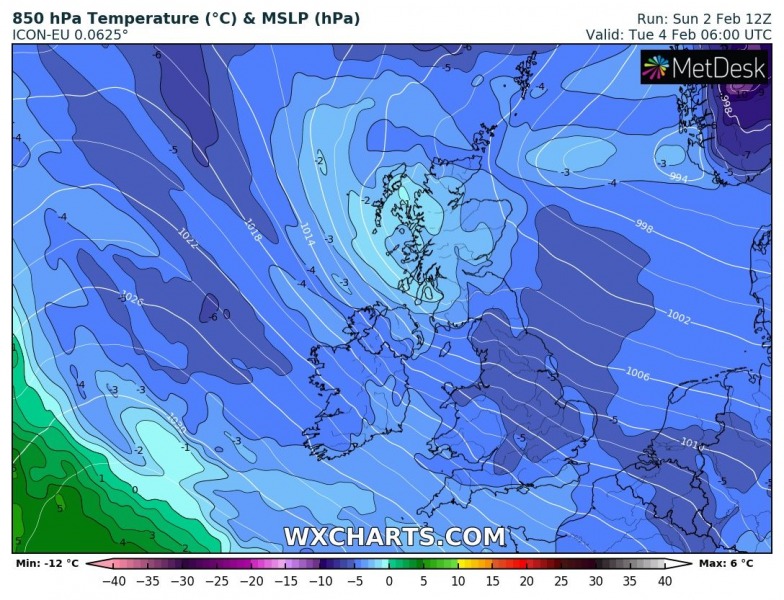 Some fresh snow is expected across the Highlands and also in the lowlands across Scotland and northern England. No significant amounts, but snow squalls may occur when the leading edge of the convective line pushes the cold air mass trough: 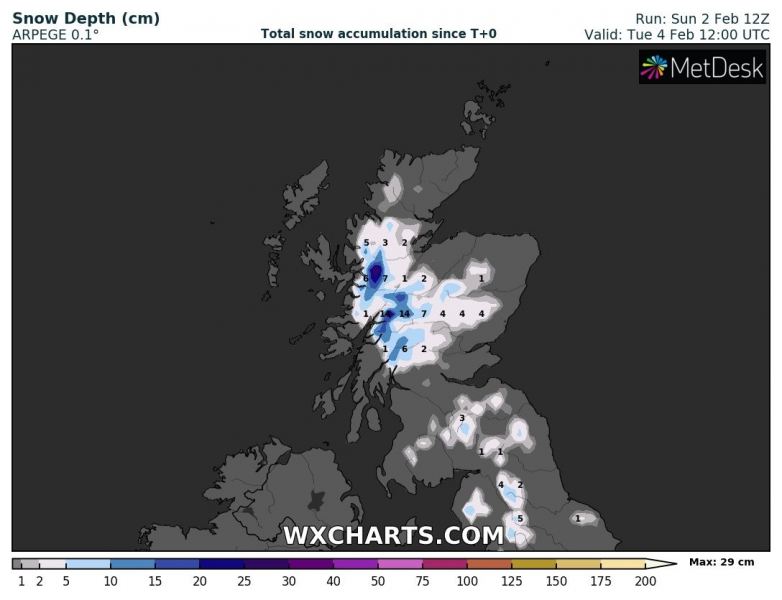 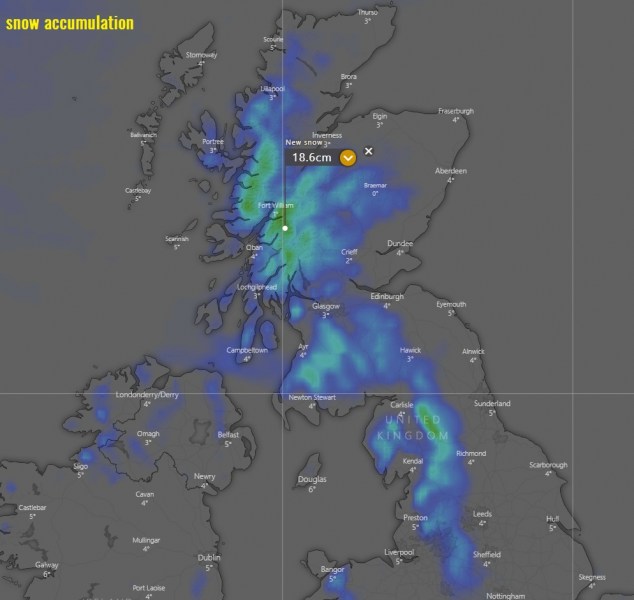 The peak wind gusts swath across the northern UK until Tuesday afternoon – the strongest winds are expected near the cyclone’s track NW of Scotland tomorrow, but then also across western Scotland and further south towards NW England and Northern Ireland. Peak gusts could reach 70-85 mph (= 100-130 km/h) and up to around 100 mph (160 = km/h) over the open waters: 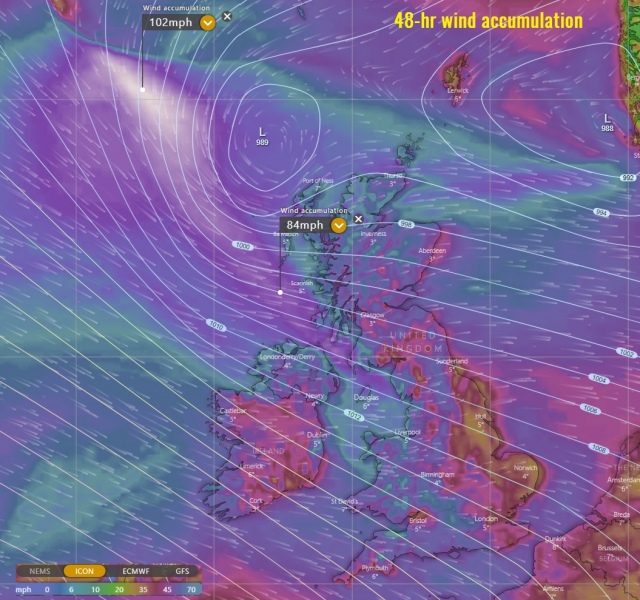 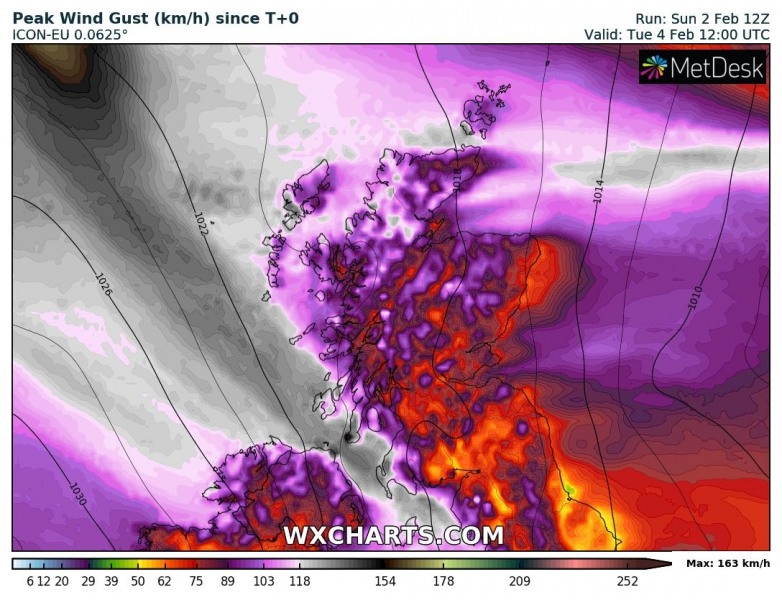 Share on TwitterShare on RedditShare on FacebookShare on PinterestShare on WhatsApp
Another warm day across the southern half of Europe - Spain up to +26, Balkans and Mediterranean up to +22, N France and Benelux again into mid-10s!
← Previous
Remarkable temperature drop from low 80s to mid-20s °F with the intense cold outbreak across the central Plains, USA
Next →
Comments are closed.