A strengthening trough will push a cold front across western Europe, bringing locally 5-15 cm of snow across the British Isles, Benelux and France, Jan 22/23rd

Associated with the changing pattern and a strengthening trough over the western Europe, another event with some fresh snow is shaping up for western Europe, starting tonight and lasting until Wednesday morning. Much colder airmass will spread across the British Isles, Ireland and Benelux region towards the eastern France and the Alps. Some snow with locally 5-15 cm of total accumulation is likely along the southeastwards moving cold front.

The pattern on Tuesday night indicates a strengthening trough on its way from western Europe towards the Mediterranean, centered over Benelux. This pattern results in fairly strong advection of cold maritime airmass from the northern Atlantic. 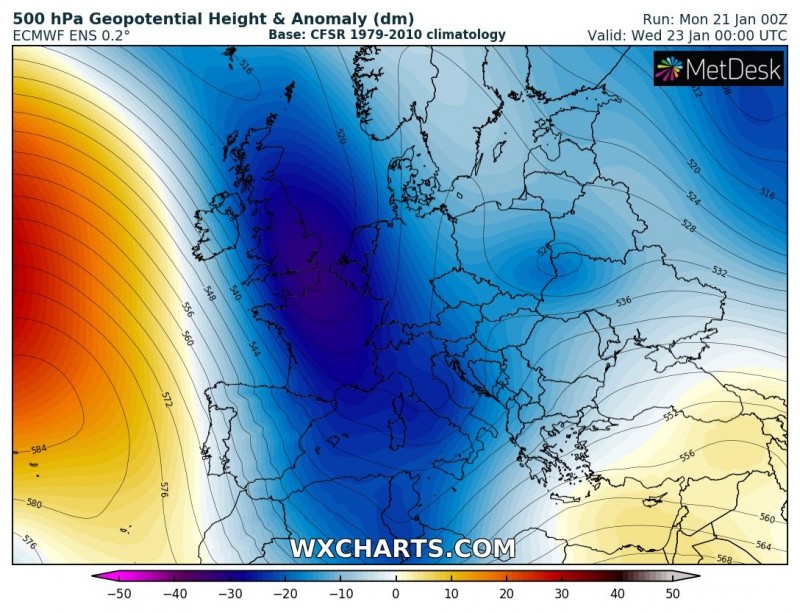 The system first reaches the British Isles and Ireland by early Tuesday, Jan 22nd with precipitation changing from rain to snow across parts of Ireland, northern Ireland, Wales, England and Scotland. Based on various models (GFS, ARPEGE, ICON-EU, HIRLAM) a few centimeters of snow is possible across these areas, more in the Scottish Highlands. 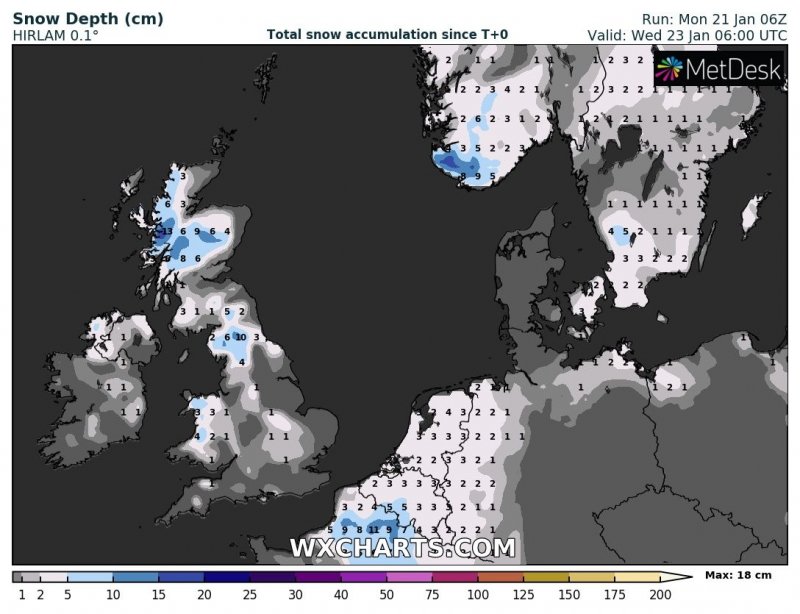 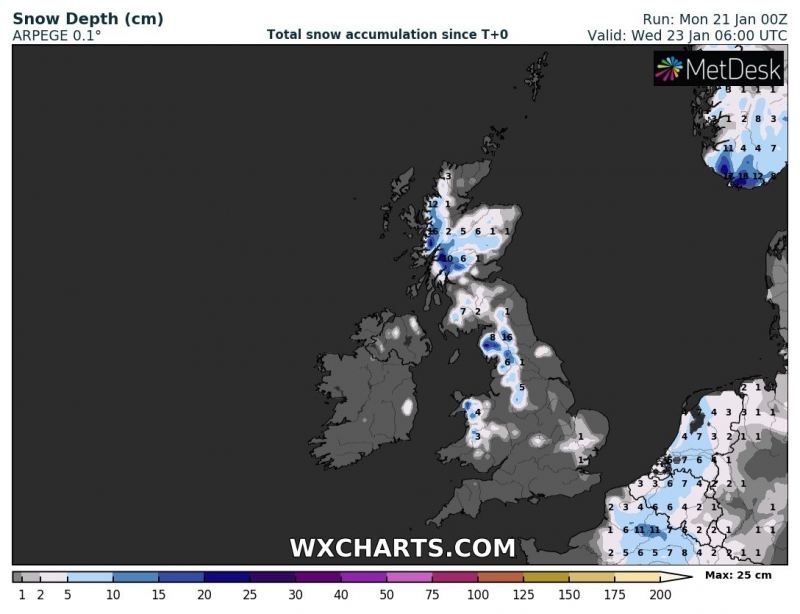 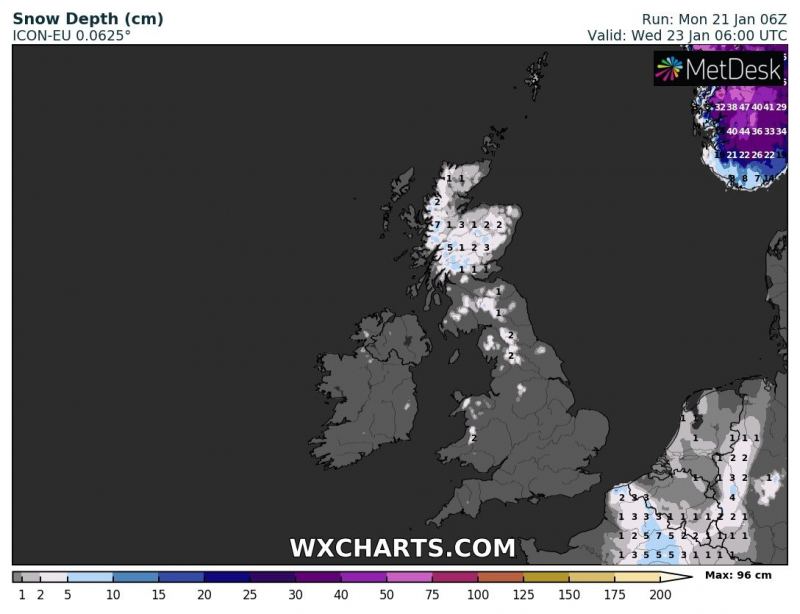 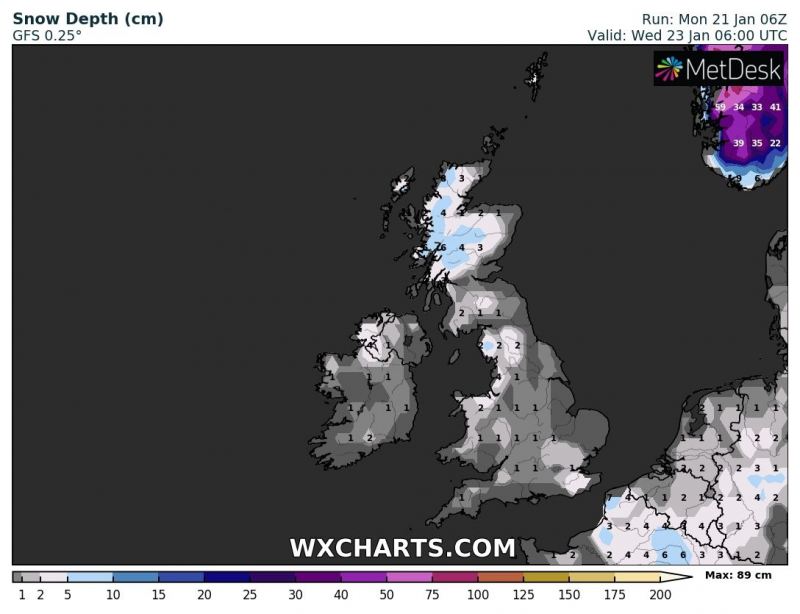 A detailed look at snow depth across Benelux until Wednesday, Jan 23rd based on GFS, ICON-EU, ARPEGE and HIRLAM models – a widespread blanket of a few centimeters of snow is likely. The ARPEGE model is the most aggressive with up to 10 cm of snow in parts of the Netherlands. 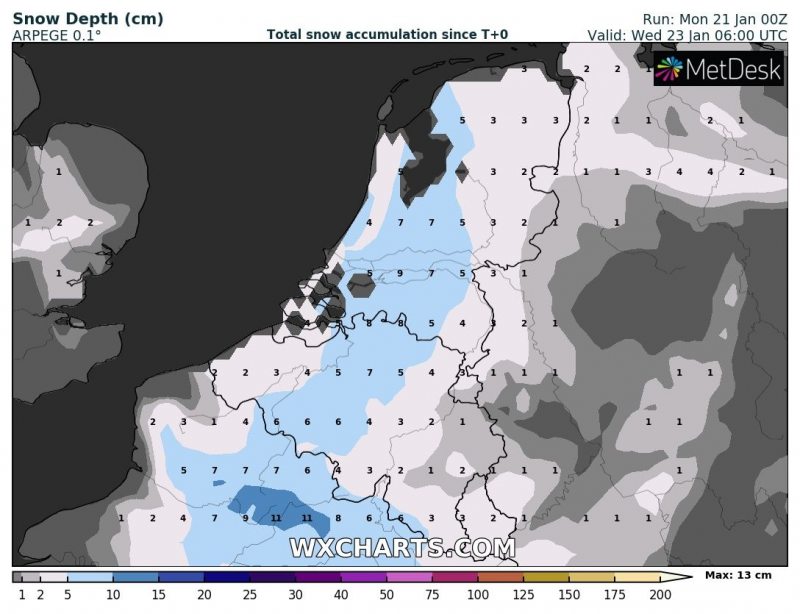 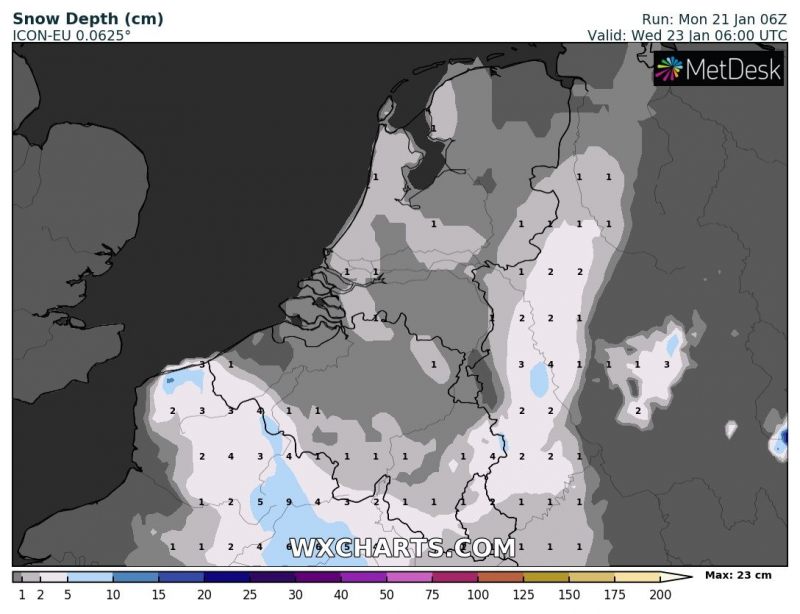 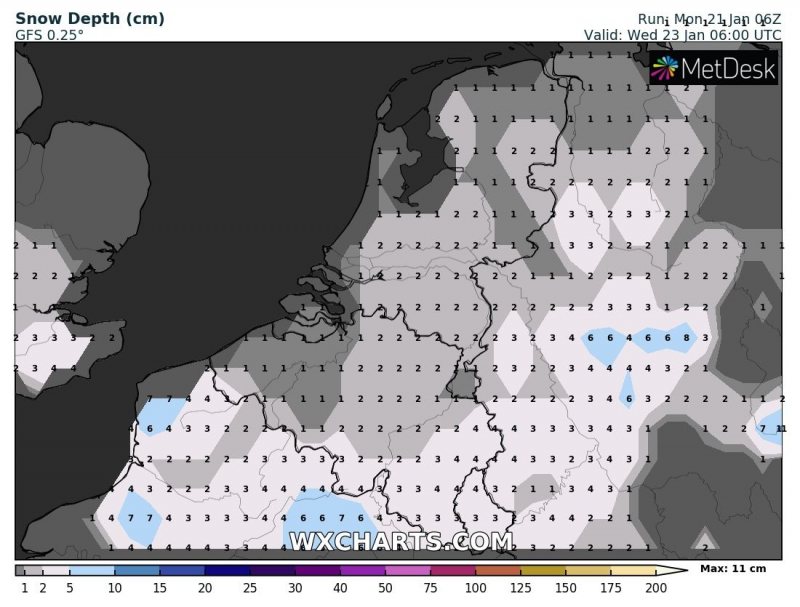 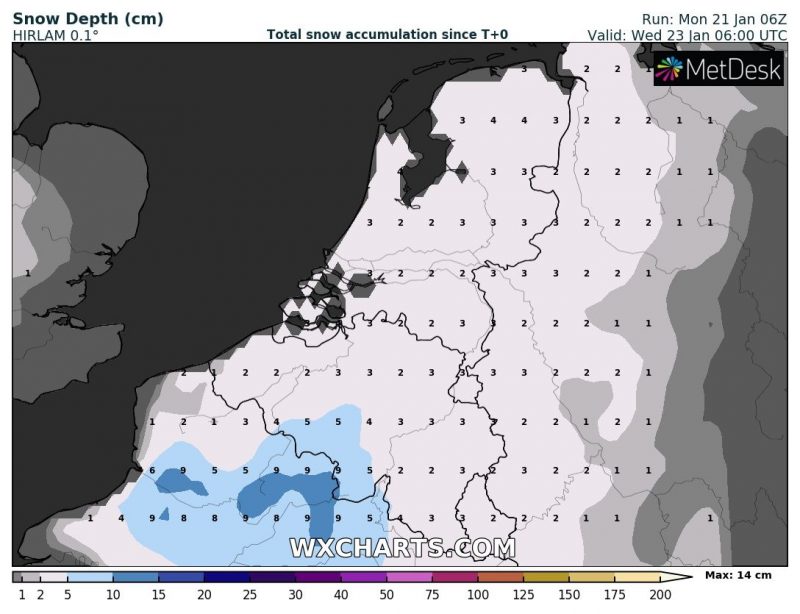 Detailed look of a snow depth across France on Wednesday, Jan 23rd morning – based on ICON-EU, ARPEGE and HIRLAM models. North-central parts of France could receive 5-10 cm of snow when the cold front pushes further east/southeast into the eastern France towards Wednesday morning. Cold airmass will also push towards the Pyrenees and northern Iberia, bringing new snow there as well – locally 15-30 cm of snow is possible. 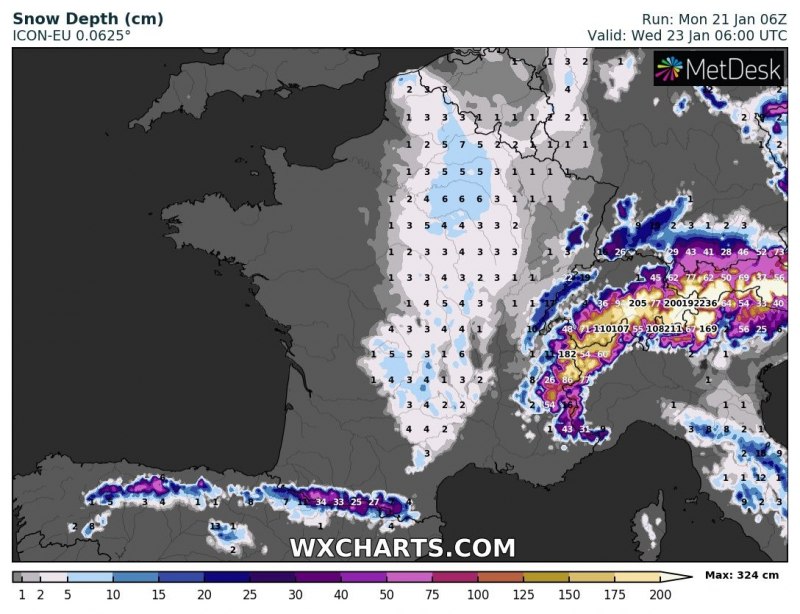 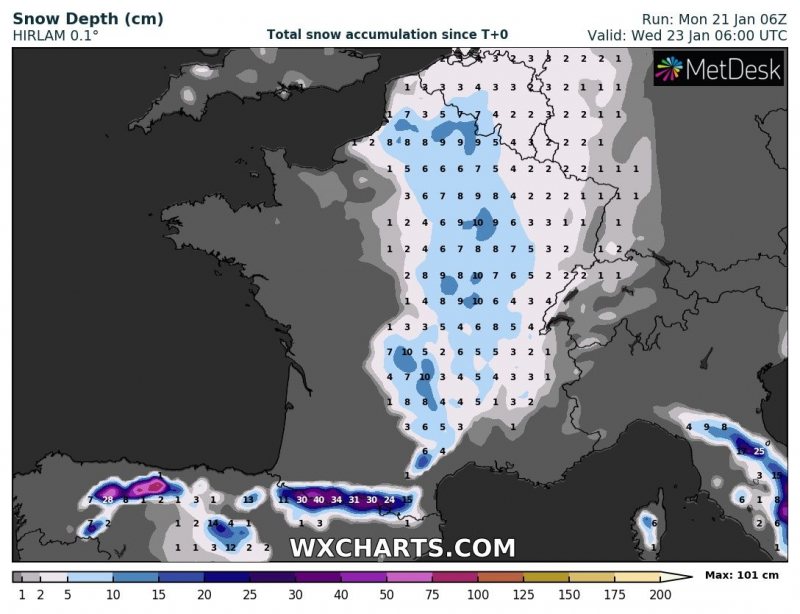 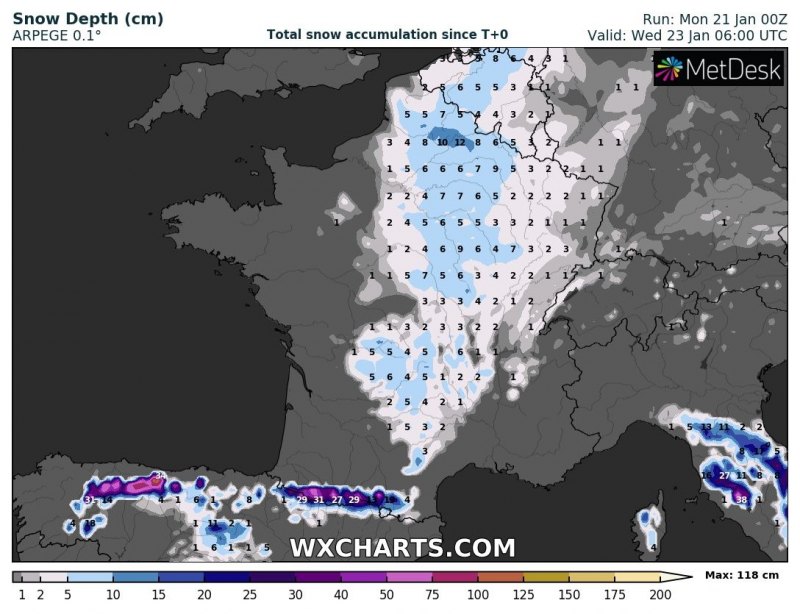 Cold weather will spread behind the system and extend for a few more days.

Share on TwitterShare on RedditShare on FacebookShare on PinterestShare on WhatsApp
Total Lunar eclipse of January 21, 2019 - first reports
← Previous
A deep cyclone forms over the north-central Mediterranean and brings 20-50 cm of snow across the WNW Balkan peninsula in the next 2-3 days, Jan 22-24th
Next →
Comments are closed.