The major change in weather pattern next week will likely bring a period of warm weather, with temperatures well above average for this time of the year. Additionally, exceptionally warm temperatures are expected to push far north into northern Scandinavia and far north into the Arctic ocean as far as Svalbard and Greenland.

The weather pattern across Europe next week will be dominated by a strengthening ridge over the eastern half of the continent and a broad low pressure area over the Atlantic, which will be ejecting consecutive deep cyclones towards the British Isles and Ireland. Warm weather will persist under the stable ridge and additional warm air advection will push warm air northward into western Europe ahead of deep cyclones. Meanwhile, the British Isles and Ireland, and to a lesser extent parts of France, Spain and Portugal will be under a dynamic weather pattern with alternating effects of cool Atlantic maritime arimass and warm air pushing from the western Mediterranean.

Very warm weather is expected across much of Europe: see the evolution on (GFS model guidance) maps below. By the second half of the week large parts of Europe may be 7-10 °C warmer than average for this period. Temperatures are expected to climb into mid-20s in central Europe by the middle of the week and approach 30 °C in parts of France and even climb above 30 °C in parts of Spain. The weekend may be extremely warm in parts of Scandinavia, up to 15 °C above average: this would imply temperatures around 20 °C.

Confidence in this pattern evolution is good – GFS and ECMWF generally agree on it. Below are 850 mbar (~1500 m level) temperature anomaly maps by ECMWF. Note the extremely warm airmass in the far north of Europe, extending far into the Arctic region. Up to 15-18 °C warmer than average for this period. 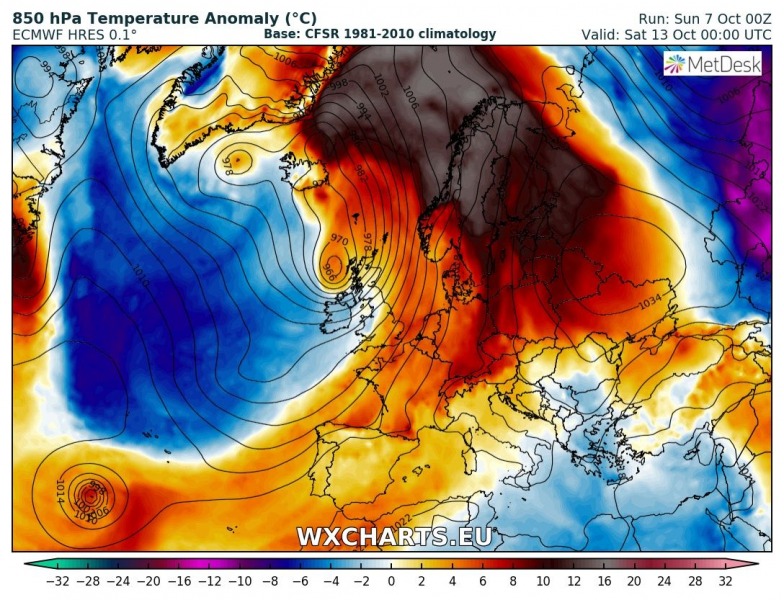 Model guidance still may change, in particular for the latter part of the week – we will be providing additional updates on the development of this mid-autumn heat wave.