Some changes in the pattern over the southern and western part of Europe in coming in early May. An omega blocking pattern should develop and support a significant warm advection into southwestern Europe, resulting in a very hot air mass also in the lowlands. It is likely the daytime temperatures will push into the mid-30s by early next week (from May 3rd to May 6th) – therefore, this could become the first heatwave of 2020! The last heatwave in Europe occurred in October 2019!

The 500 mbar chart reveals a classic omega blocking ridge pattern developing over western and southern Europe this weekend. A deep and large upper low forms over the Azores, while high-pressure system strengthens to its east, over Iberian peninsula, France, and UK/Ireland. This will deliver stable weather into the western half of Europe.

Looking over the 850 mbar (approx. 1500m ASL) temperature anomalies, we can see a strong advection of warm air mass starts this weekend over Morrocco into southern Iberia. It significantly strengthens on Sunday and Monday, delivering more than 12 °C warmer air mass than usual in early May. The advection of warm air mass continues north into western Europe on Tuesday and Wednesday. To the east of the ridge and this heatwave, some colder air spreads into central Europe and the Balkans. 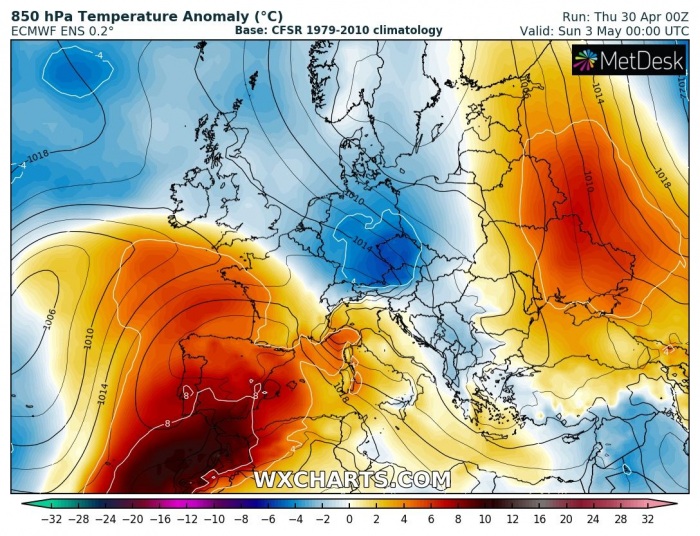 Here is a closer look over the simulated maximum temperatures across the Iberian peninsula this weekend into early next week. It is likely southern Spain will reach or even locally exceed +35 °C threshold in the afternoons, especially early next week. This is pretty extreme for early May!

Stay tuned for further updates on the developing pattern in the coming days. The pattern could also deliver higher threat for severe storms into western Europe next week – we will keep you updated over the weekend!