A progressive pattern developing from western into central Europe this weekend will bring a deep trough towards the northern Mediterranean where a transition of a trough into a deep upper low is expected over N Italy on Sunday. In response, a classic but deep surface cyclone (Genoa low) will form and result in frontal system pushed towards the western Balkan peninsula. Such a pattern usually brings strong warm and humid southerlies across the Ligurian and Adriatic sea, bringing large amounts of moisture towards the southern Alpine flank. Persisting winds result in orographic rainfall and therefore high amounts of rain, as well as lots of snow in the higher elevations.

With the still rather warm Mediterranean sea, instability should build up and locally reach up to 1000 J/kg MLCAPE, fueling the storms which will be forming ahead and along the main frontal boundary, being slowly pushed from west to east across the Ligurian sea, Italy and Adriatic sea. Some severe weather with threat for severe winds and even some hail will exist, however, the main threat will be torrential rainfall. Strong near-surface wind field could be supportive of rotating storms as well, therefore some tornado threat will exist (e.g. Ligurian Bay, N Adriatic region).

Below is a map of the cumulative rainfall on Sunday, locally 150 – 200 mm in 24 hours could result from both orographic and convective rainfall.

Stay alert for flash floods in these regions! 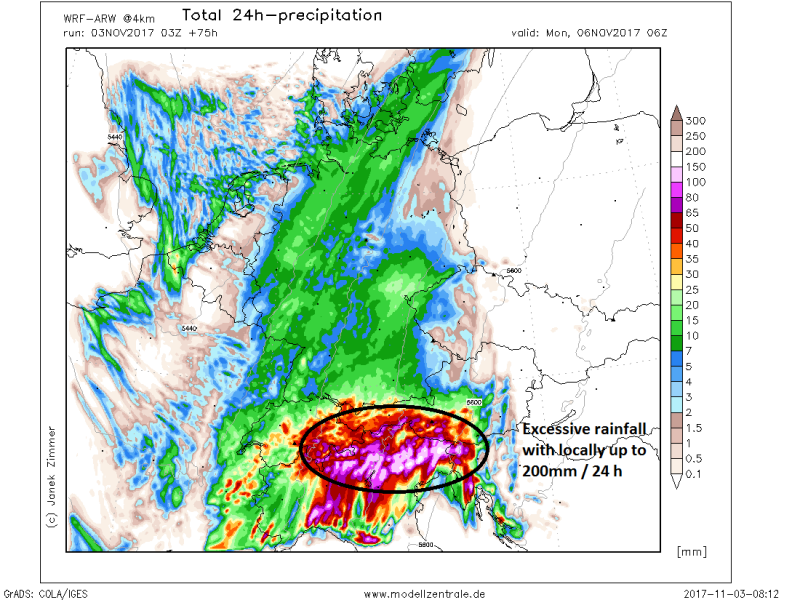