A positive NAO pattern continues – meaning above normal activity of the Atlantic storms. An upper wave is currently ejecting southeast Canada and expected to develop yet another rapidly intensifying extra-tropical cyclone today. Models are forecasting a violent windstorm again. Thankfully, the system will stay over the open waters of Northwest Atlantic during its peak strength (hurricane-force winds) tonight and will not pose any significant threats to land areas until Sunday when high swell pushed towards southwest Iceland.

18 UTC analysis on Jan 16th indicated a developing cyclone just off the northeast US coast, with a rapidly intensifying process expected to begin within the next 24 hours. Hurricane-force winds will develop while the system will be moving along far eastern Canada into the open waters of the Northwest Atlantic ocean. 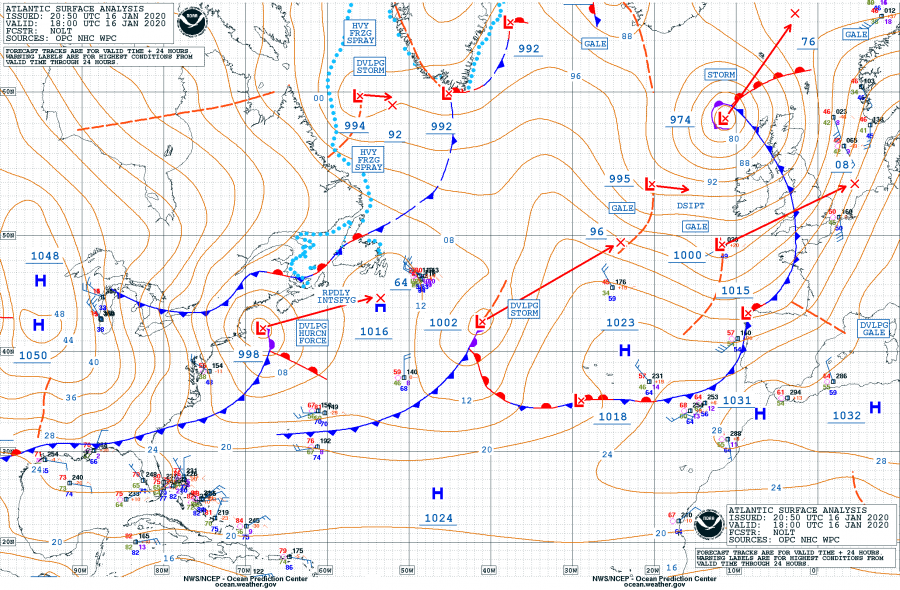 12-hour sequence of the cyclone’s track from Friday morning until Saturday evening. It forms along the east-southeast Canada and soon begins rapidly intensifying. Its central pressure is likely going to push into low 950s, possibly even lower at its peak strength later tonight (Friday’s night). Rapid strengthening nature of the system develops a powerful wind field around the core with hurricane-force winds in excess of 150 km/h. 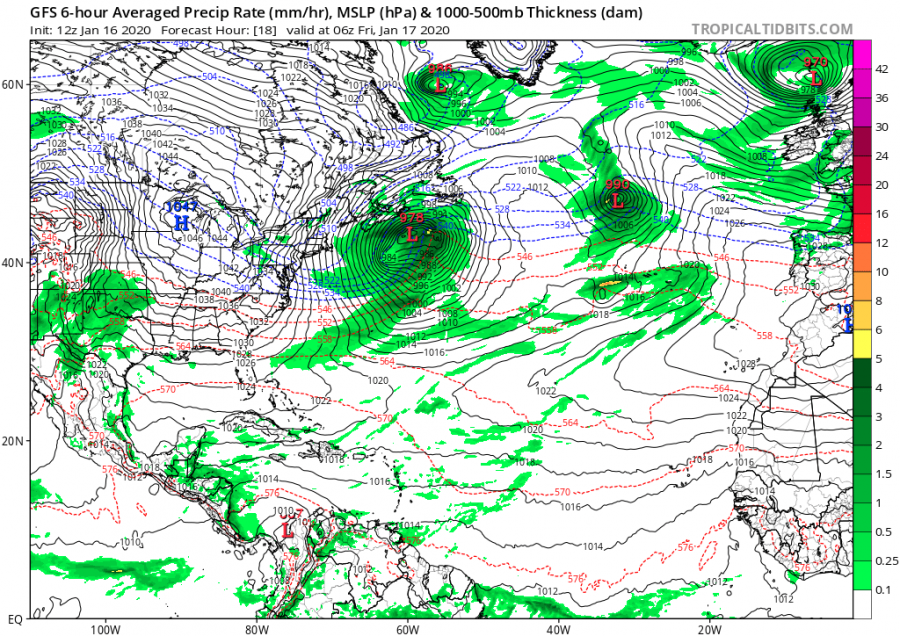 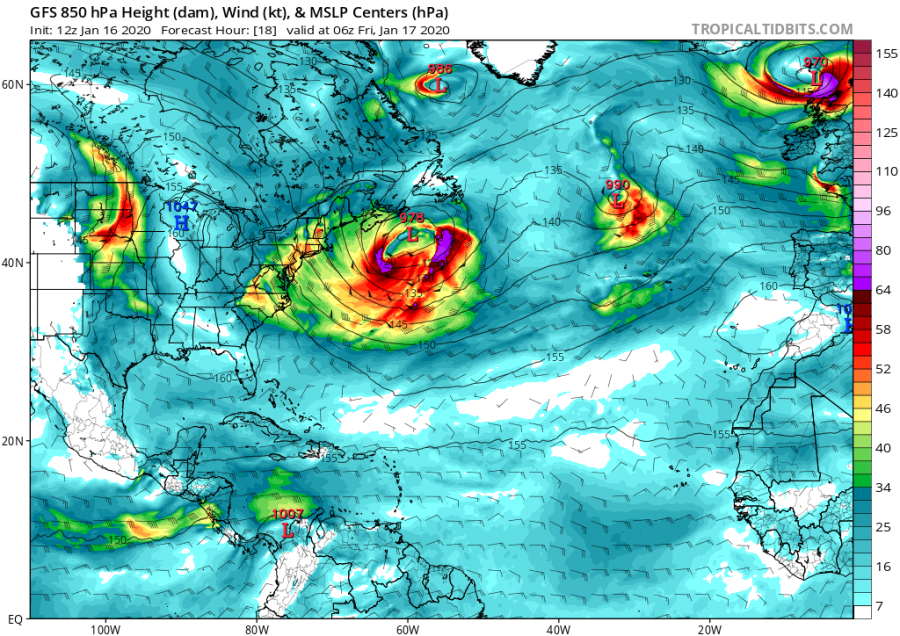 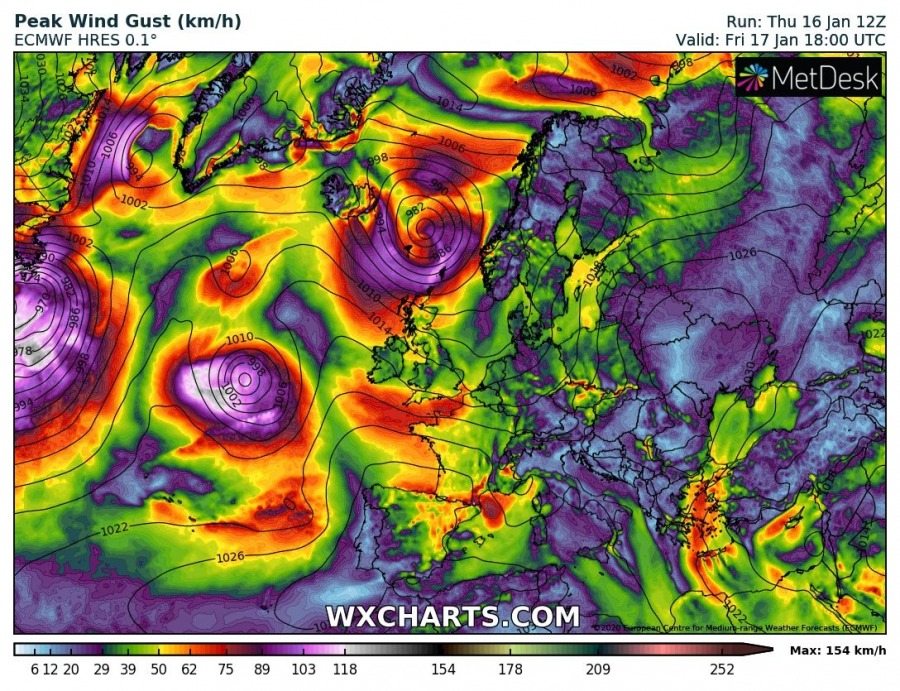 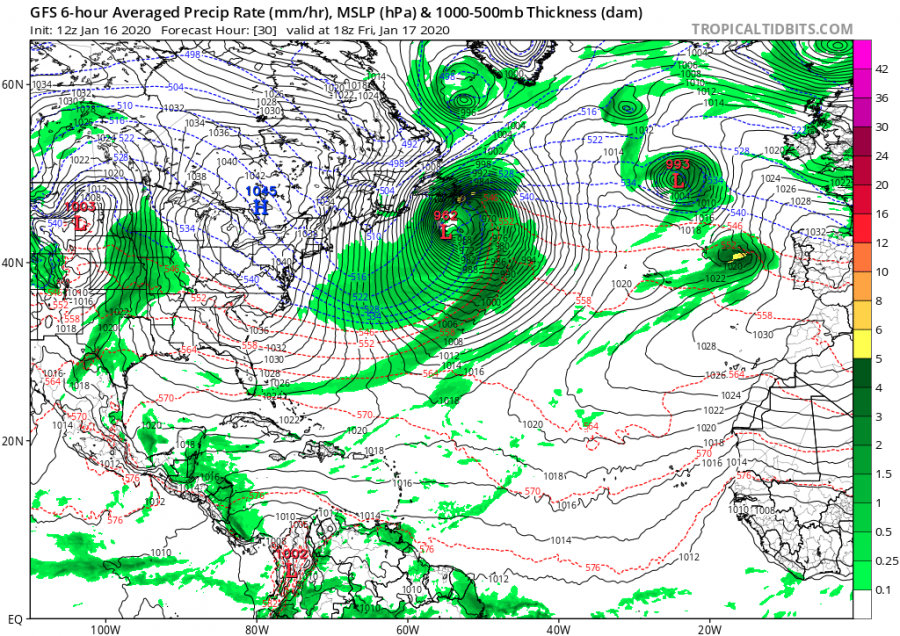 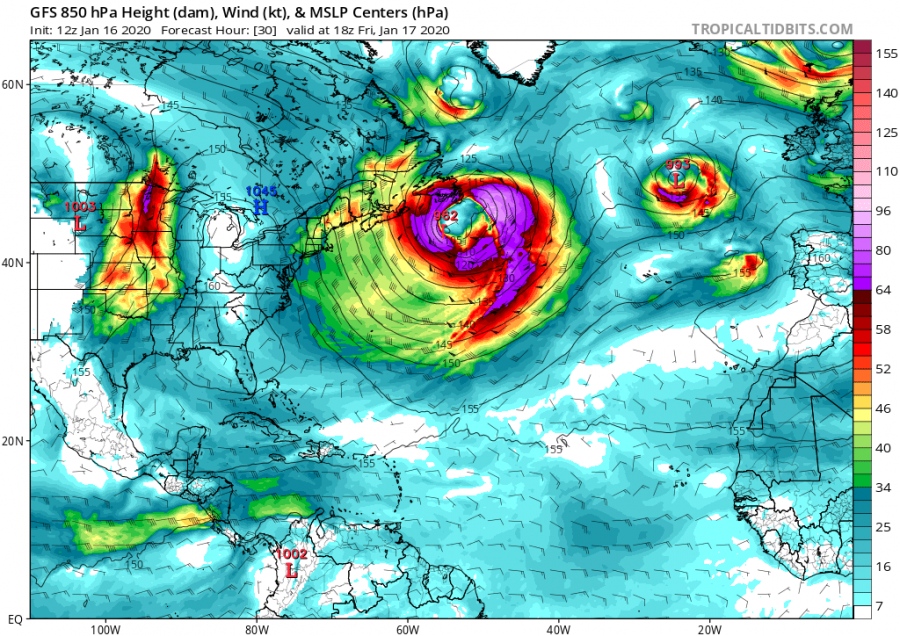 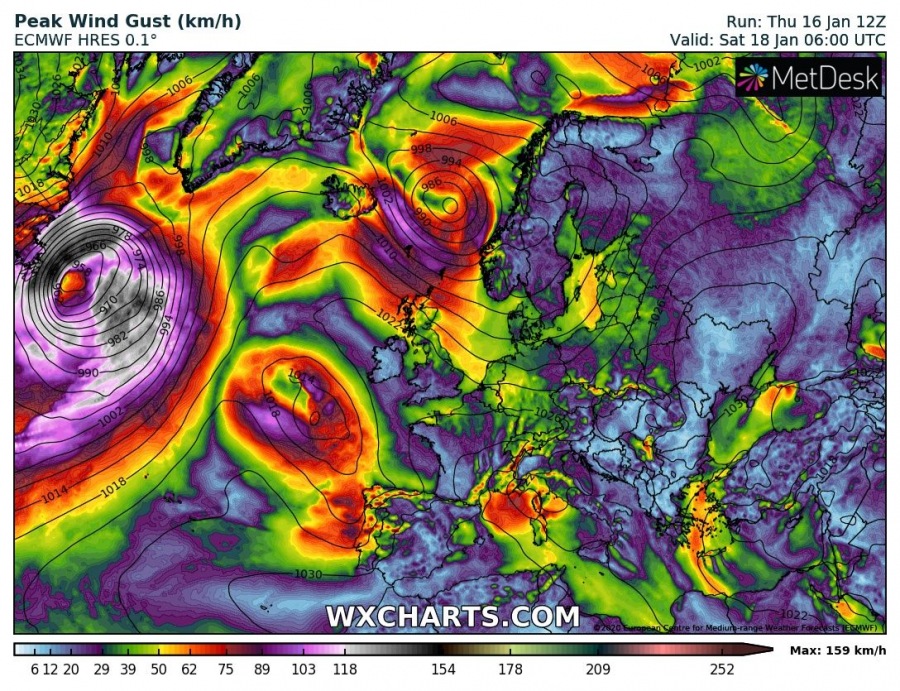 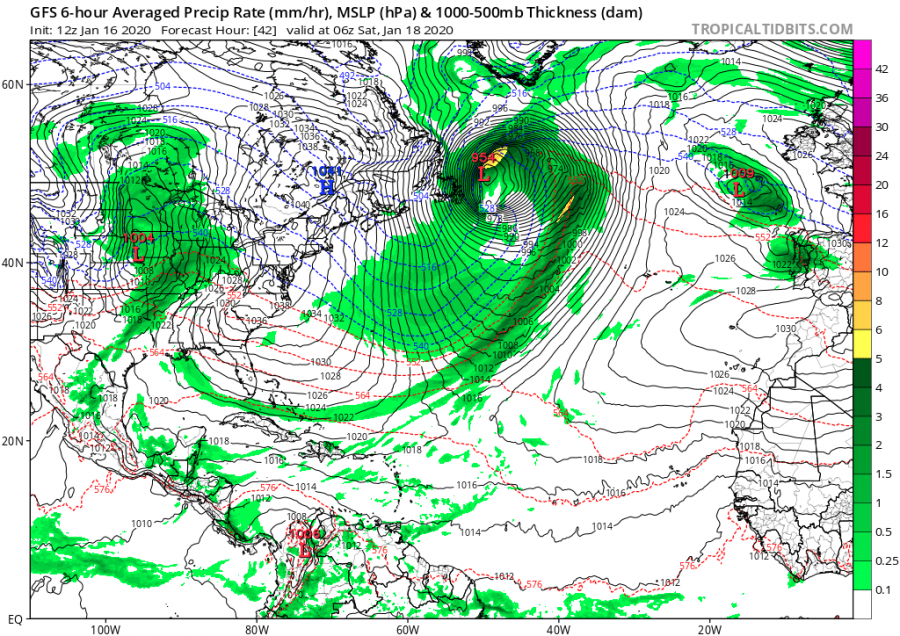 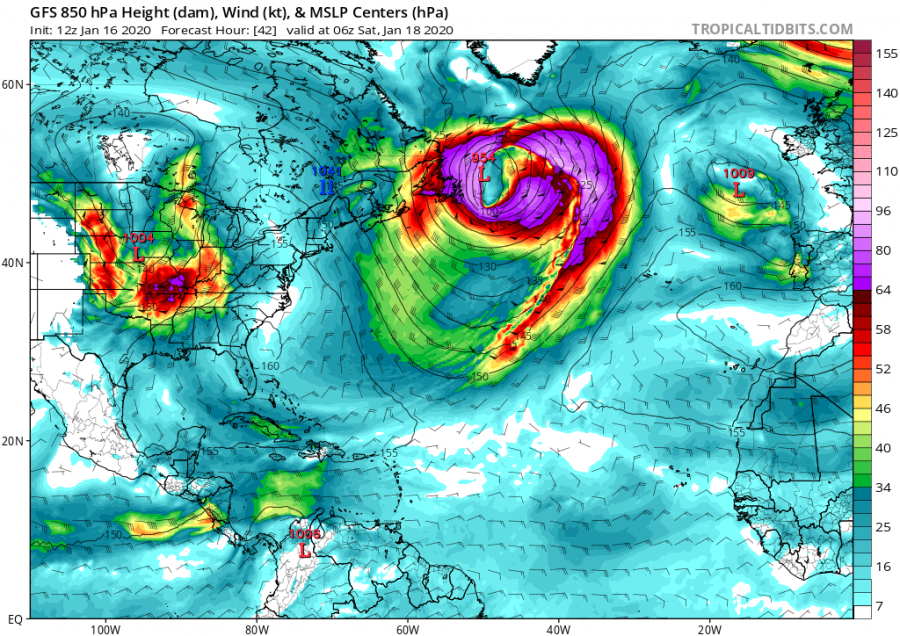 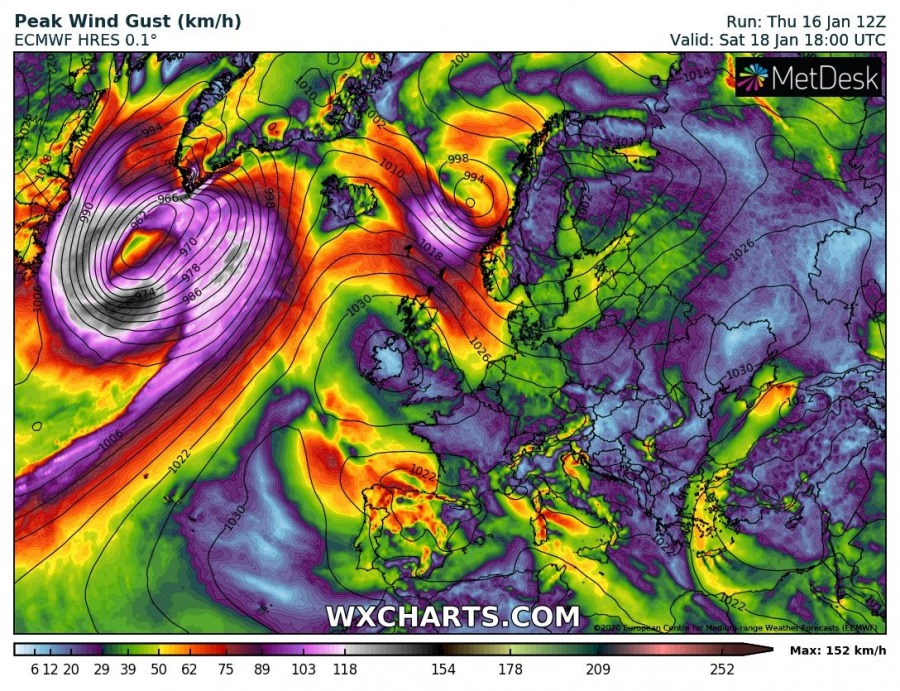 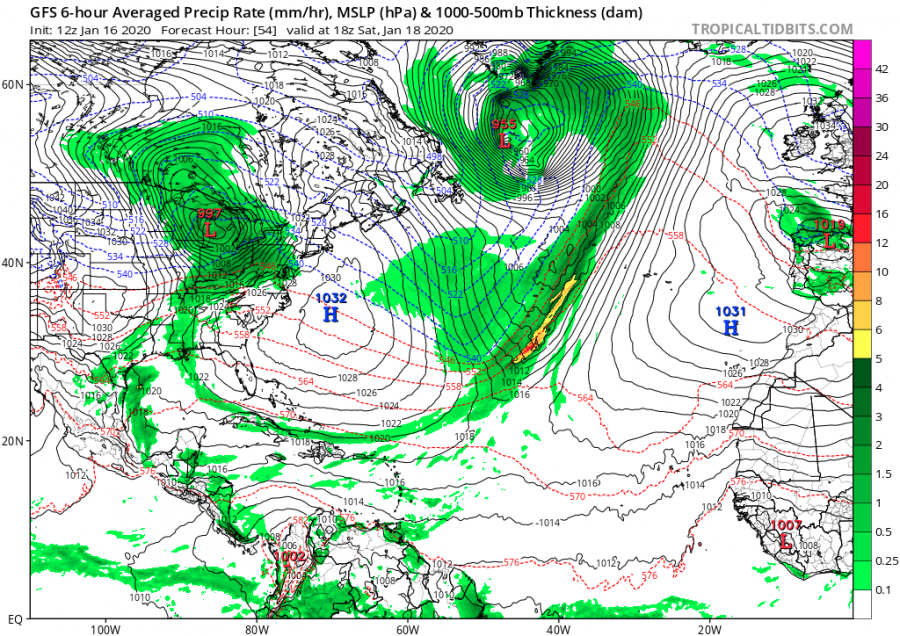 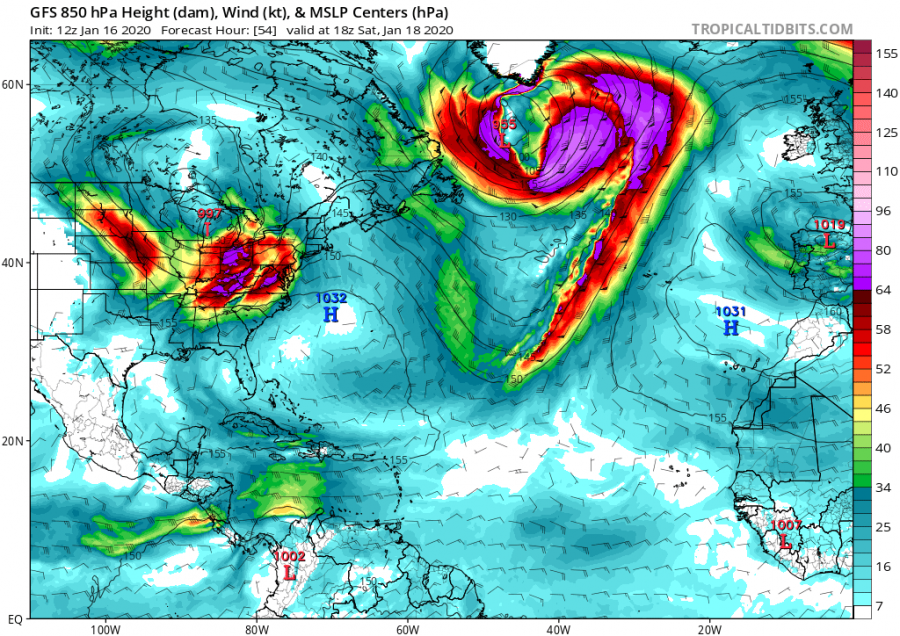 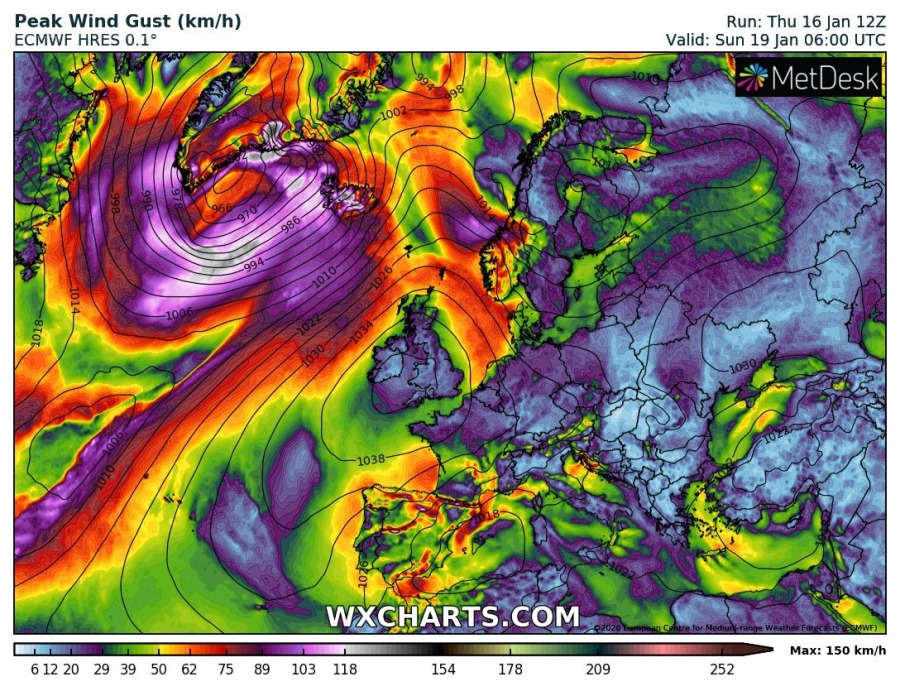 Infrared satellite simulation is hinting that probably another impressive satellite presentation can be expected with this system, similar to what we have seen with the past six (6) North Atlantic storms since Christmas. 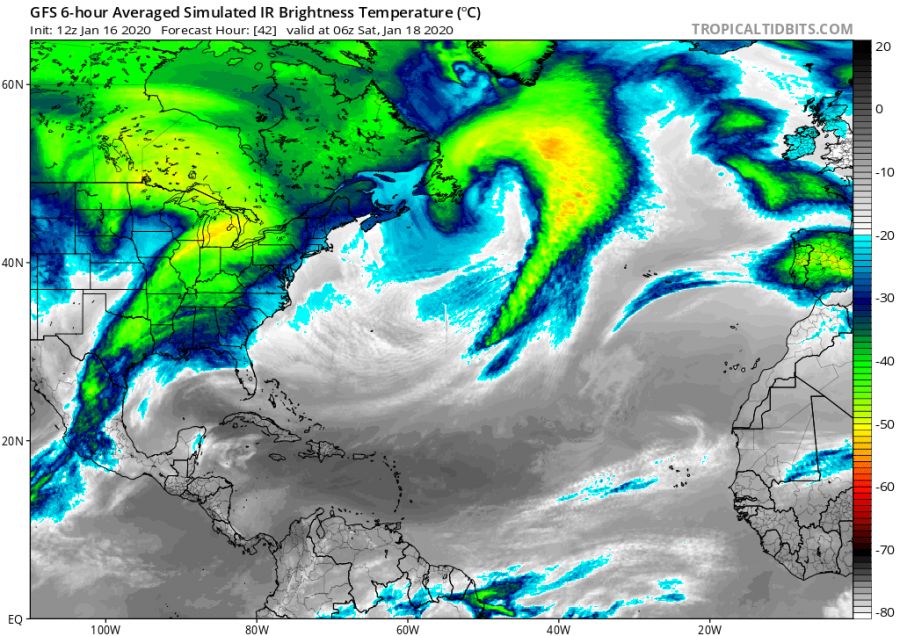 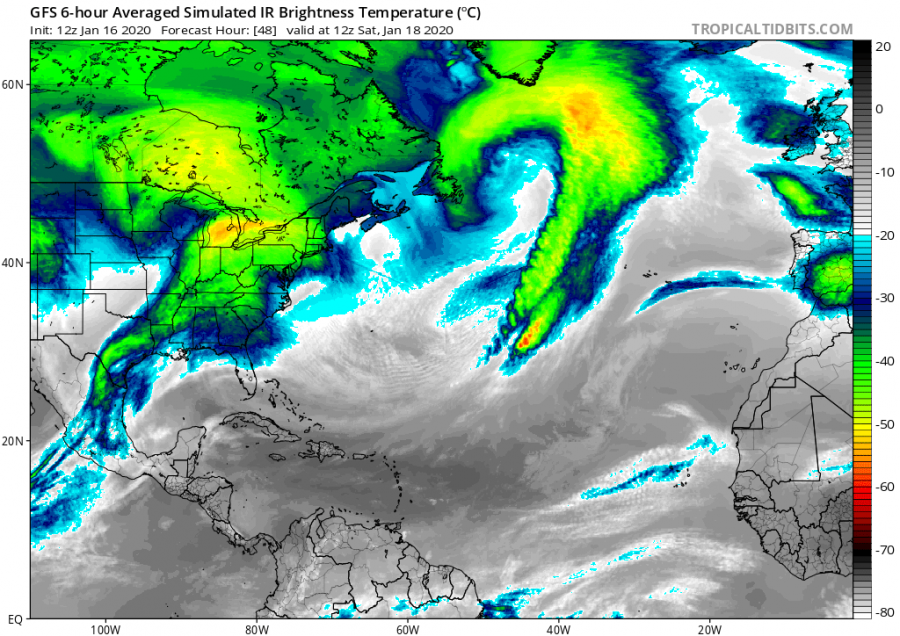 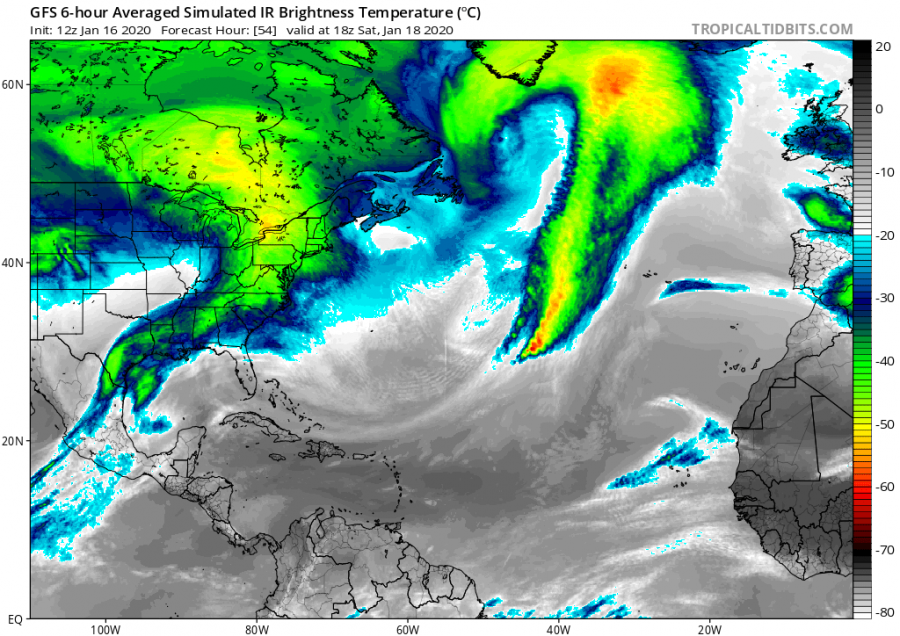 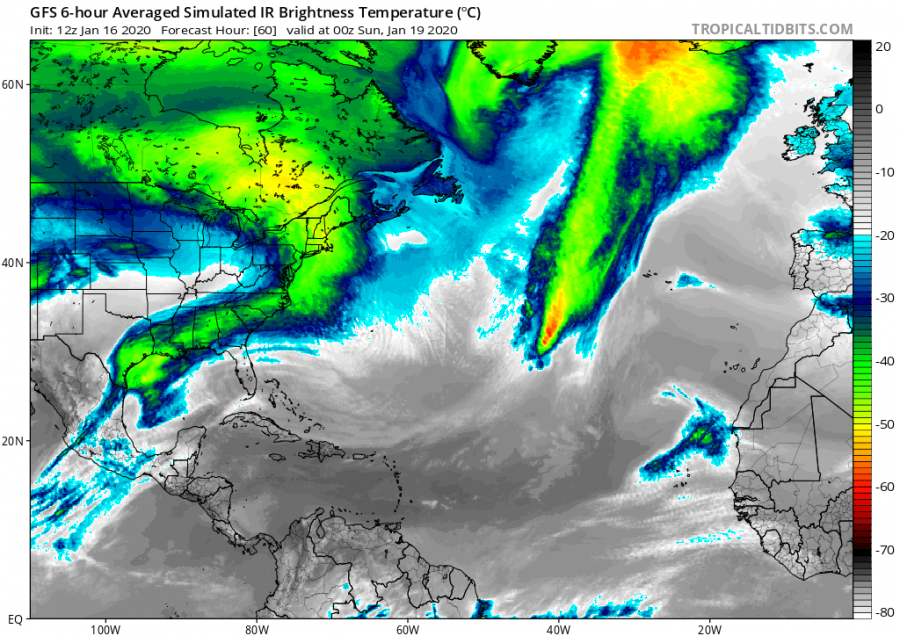 GFS model peak wind gusts swath along the cyclone’s track over the Northwest Atlantic – should develop a violent windstorm across the Labrador Sea and along the eastern Canada today (Friday), as well as around the southern tip of Greenland on late Saturday. 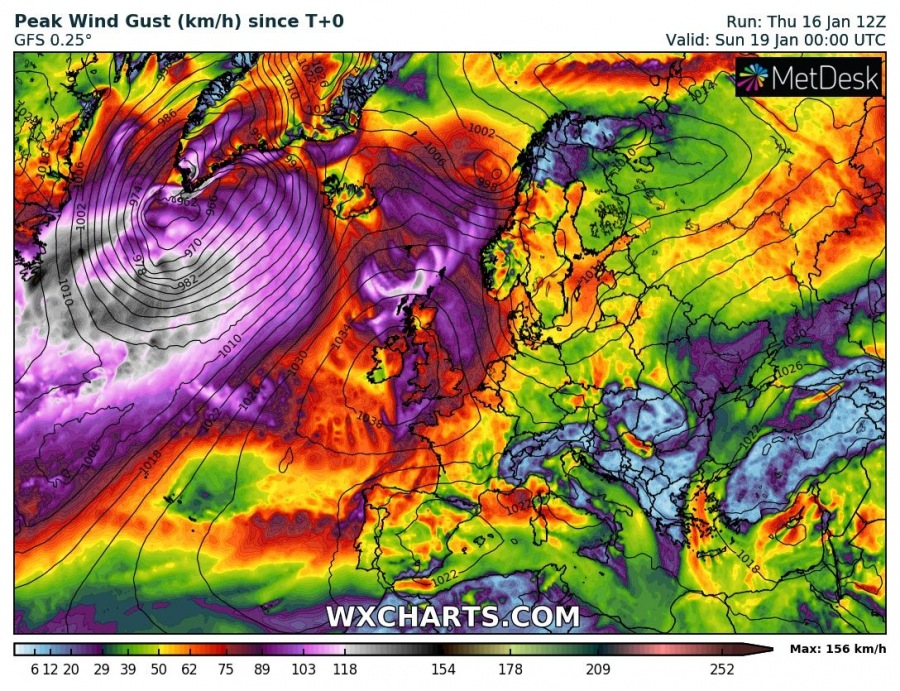 Such a broad wind field with this cyclone will also bring major waves and swell across the North Atlantic, gradually spreading towards Iceland this weekend. Significant wave heights above 12 meters are likely. 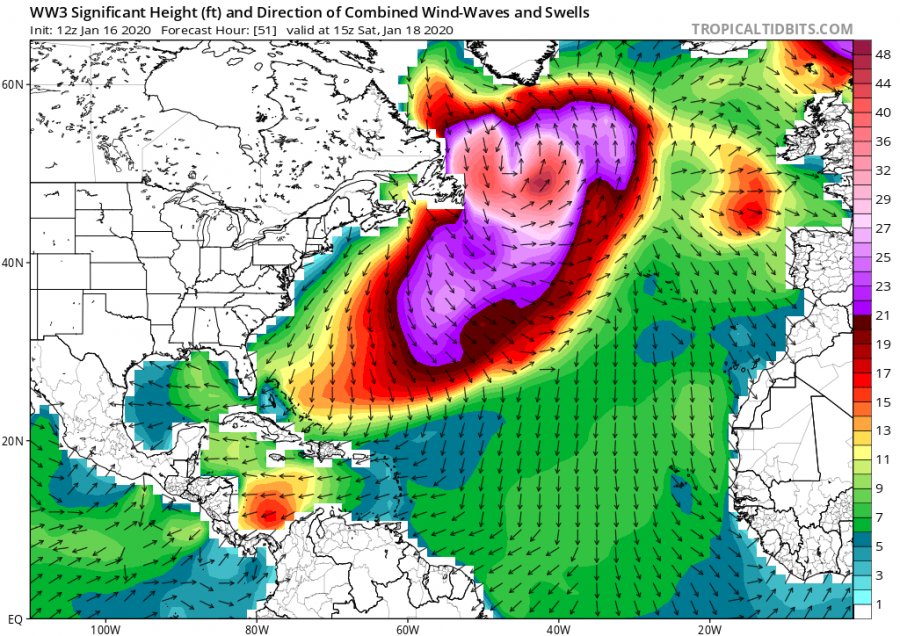 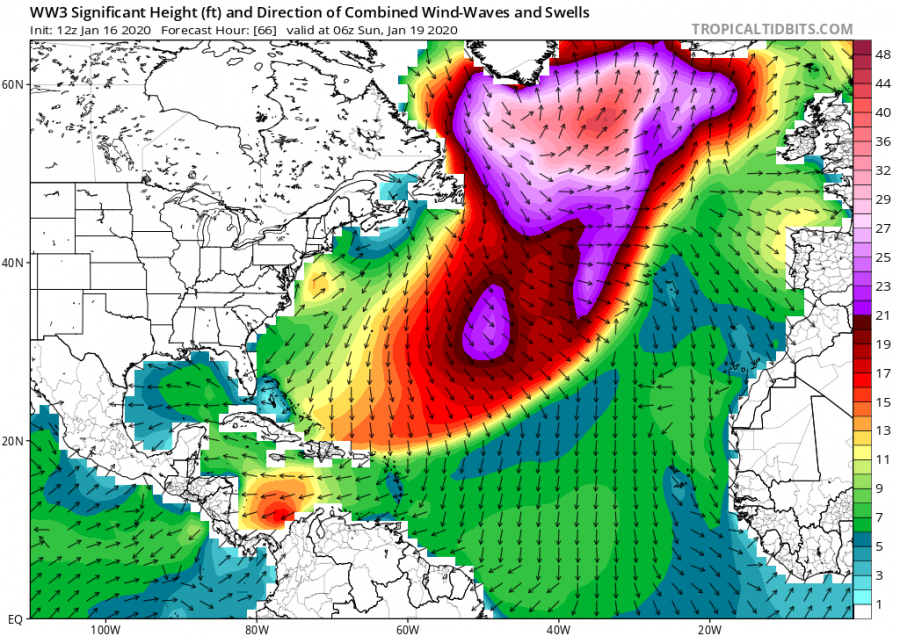 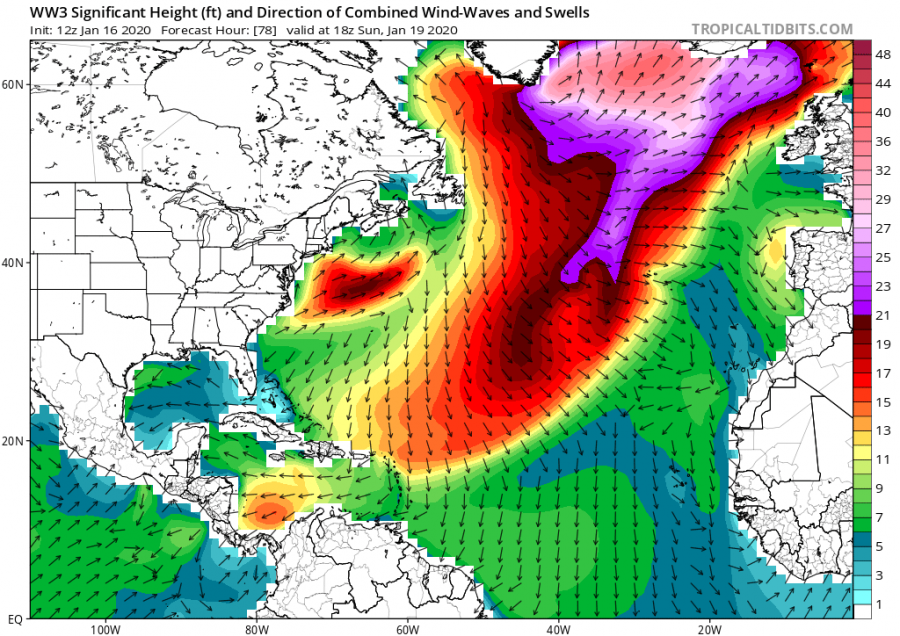 We will be updating again later today with fresh satellite imagery during the rapid intensification process – stay tuned!