December 2019, the first winter month, is coming to an end. Two more winter months are ahead, and we will take a closer look at what to expect, based on the latest long-range model forecasts.

December 2019 so far (3 weeks), featured an interesting pattern. North Atlantic, north Europe, and Canada were under lower pressure. This corresponded to higher than average temperatures over Eurasia and the continental United States, due to the colder air being locked further north. But we can see colder temperatures in Canada and in northern parts of the United States, associated with a strong cold blast, during a polar vortex core transition. Images below are re-analysis from NCEP/CPC. 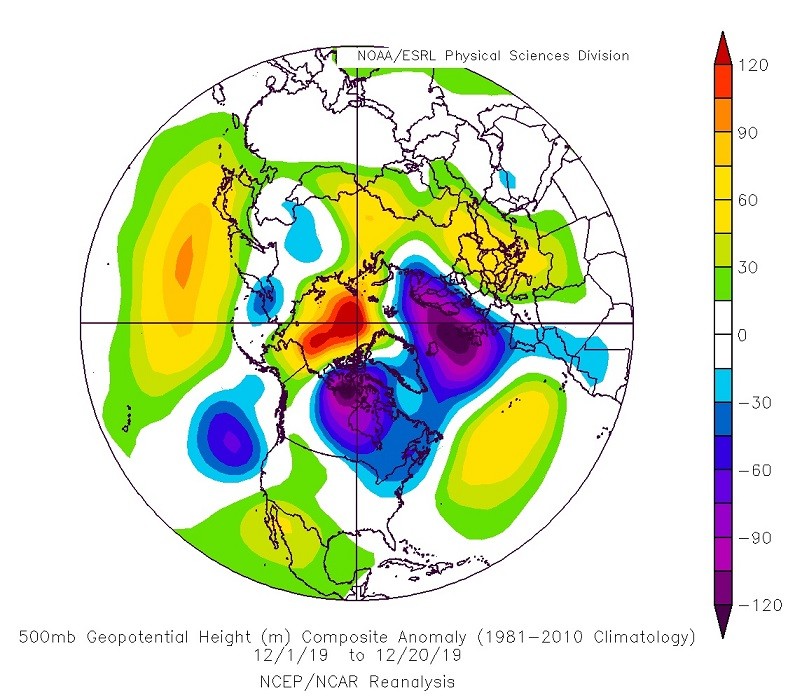 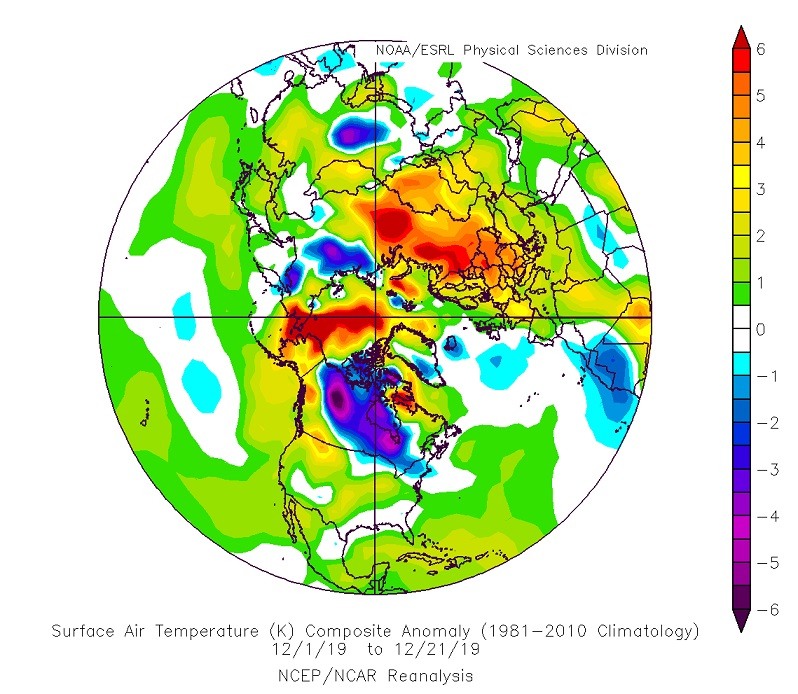 The rest of December is going to end on a dynamic note, with higher pressure coming over Europe, and the core of the polar vortex bringing very low temperatures to Alaska. Europe will be mainly warmer than average, with the exception of transitional cold air in central and southeast parts. Canada and the United States east of the Rockies are expected to be well above average. 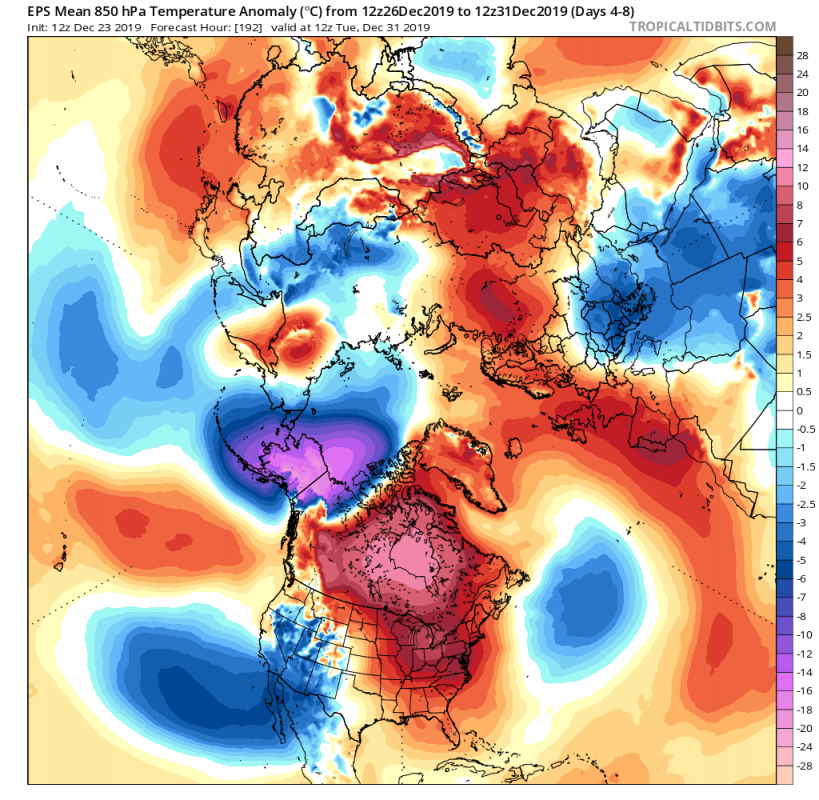 Long range forecast from the ECMWF model for December was actually quite decent. This is the latest run from early December, so the model kinda had the idea of what it is getting into. Comparing this forecast to the first two re-analysis graphics above, we can see that the pressure pattern is quite close, as are the temperature anomalies. It was a bit too weak on the cold shot into the northern United States, but it is colder than normal in Canada like it’s supposed to be. 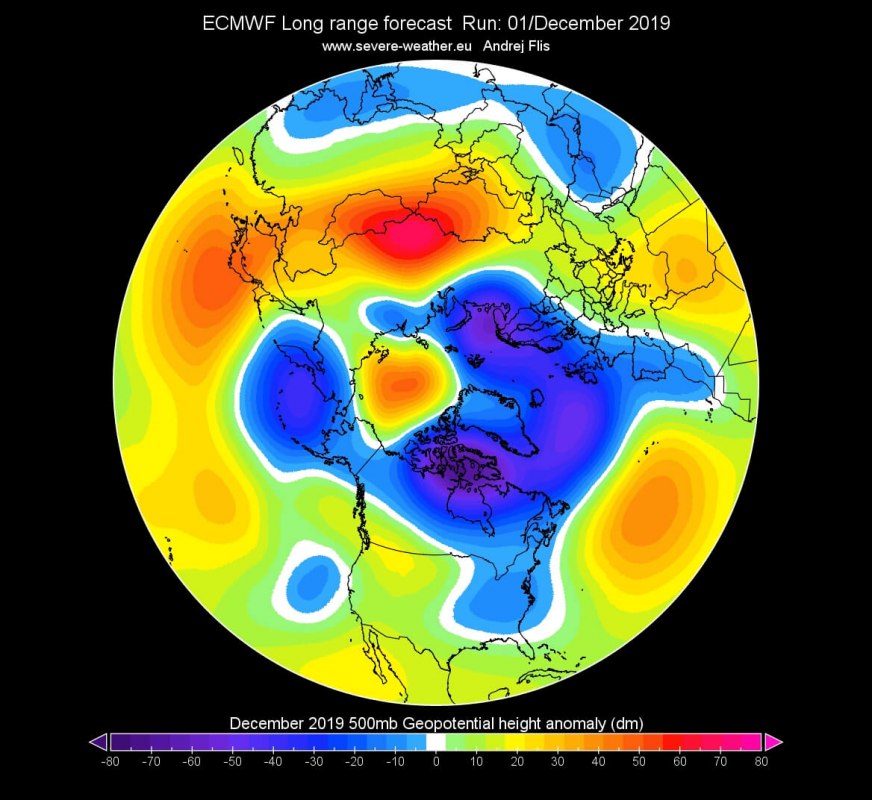 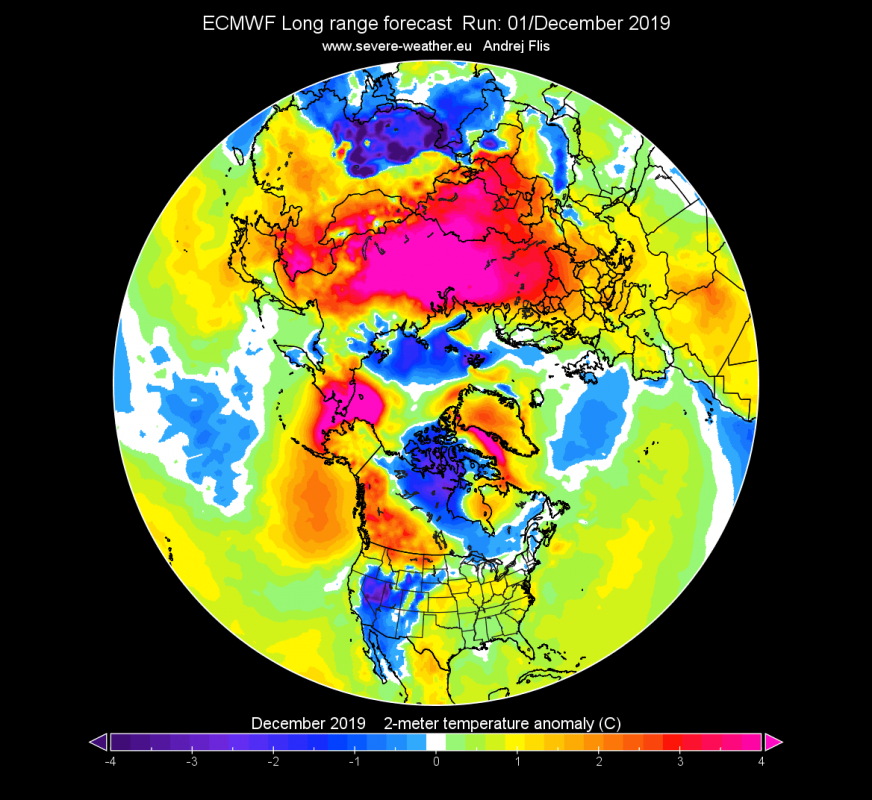 We are going to look at the January and February 2020 forecast from this same model run. It is worth to note, that the further out we go, the less accurate the model gets. You can learn what are long-range forecasts and how to use them, in our long-range article.

Compared to the December forecast above, there is a major difference coming with the new year. There is an area of high pressure (blocking ridge) expected to appear and stay for a while in the north-east Pacific. This is a key player in the overall pressure pattern for the upcoming weeks. A blocking ridge in this position is a very supportive factor for colder air transport from Canada into the United States, as it promotes northerly flow on its east side. It also plays a role in the weather pattern wave downstream in the Atlantic, as it usually tends to mean lower pressure in the North Atlantic, which we all know by now means milder conditions for Europe (positive NAO – North Atlantic Oscillation). That is nicely reflected on the second graphic which shows temperature anomaly on the 850mb level (~1.500m altitude). 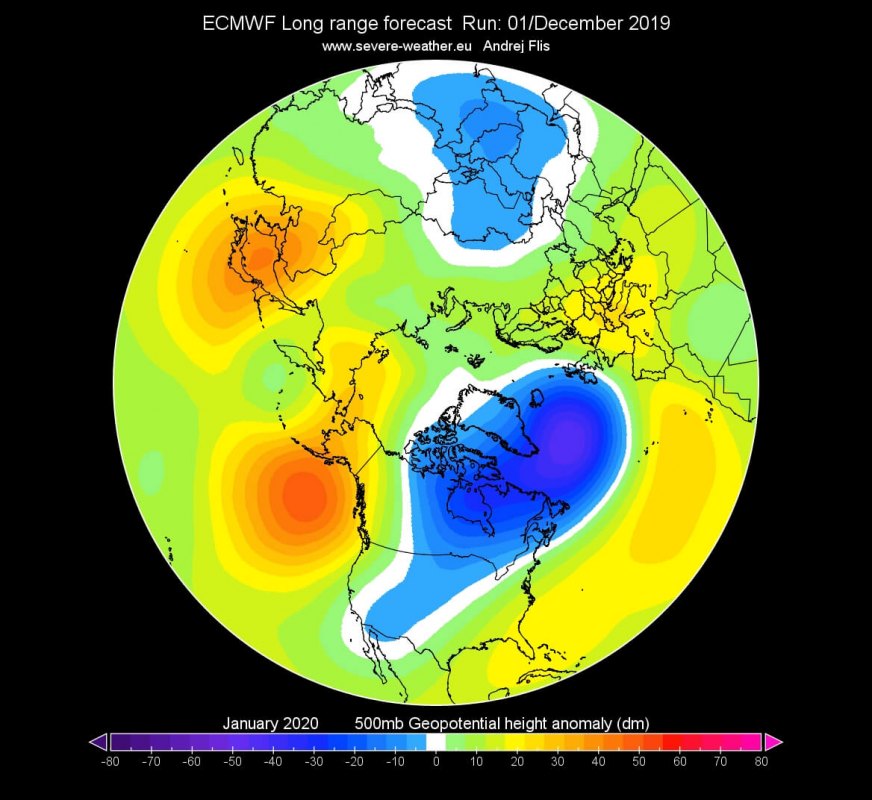 Looking at the usual medium range models, this weather pattern is exactly what is being forecast currently for early January, so it seems that the long-range model is on a good track so far. We see the blocking ridge starting to appear in the northeast Pacific and the positive NAO pattern in the North Atlantic. 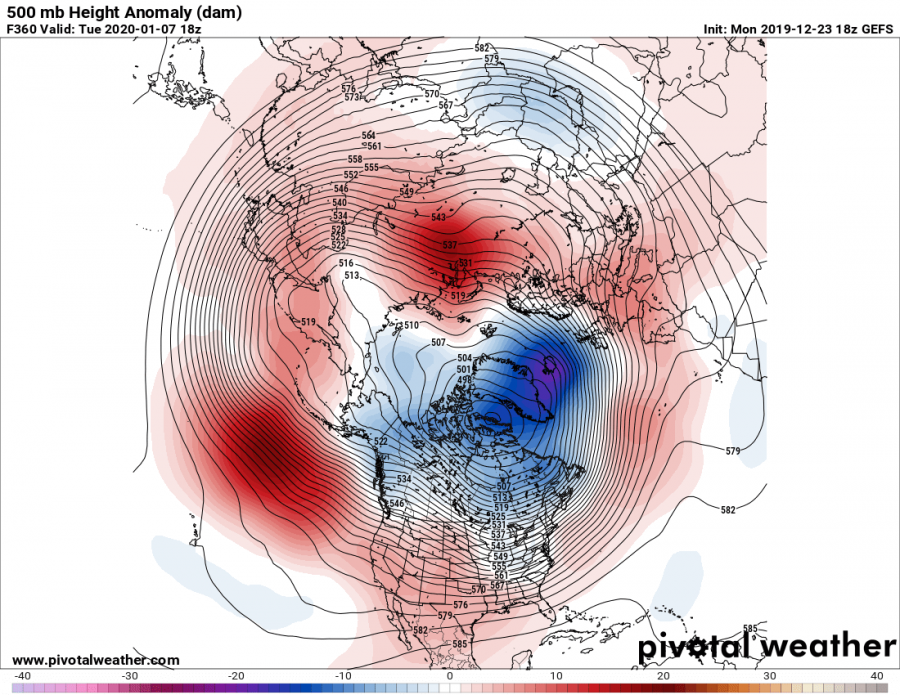 February 2020 is set to continue on a similar path, keeping the blocking ridge in the Pacific, and trying to maintain the status quo in the North Atlantic. It is not very often that we get to see almost a copy/paste pattern two months in a row. 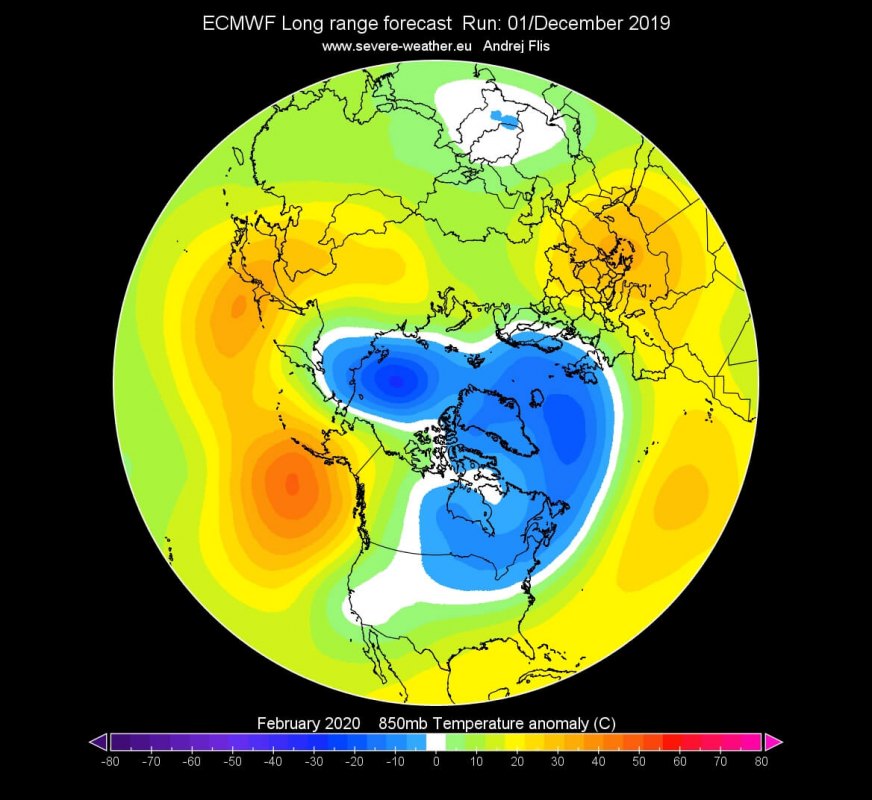 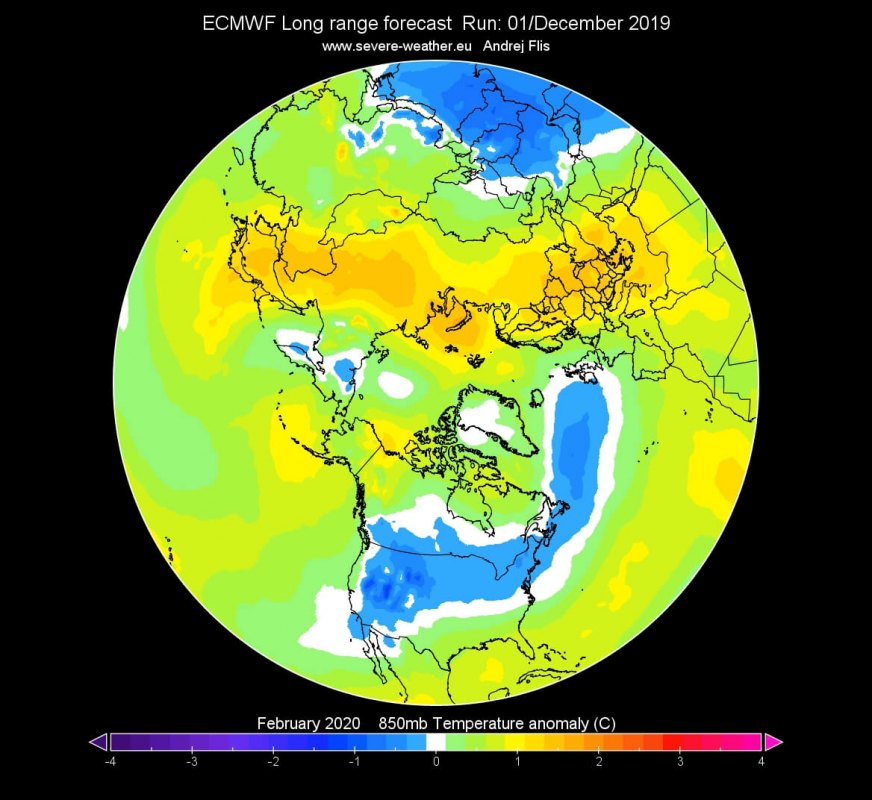 The high pressure in the North Pacific is also nicely seen on the sea level pressure anomaly forecast. The average picture for January and February shows the blocking high and the downstream lower pressure. This is kinda what the long-range models were aiming at in the past 4 months. 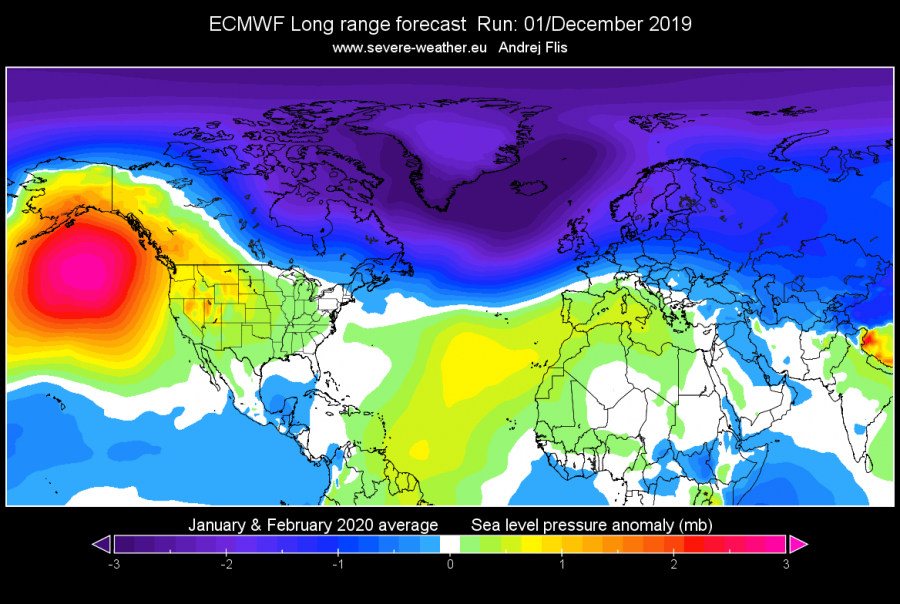 The blocking high in the Pacific, combined with a positive NAO in the North Atlantic, can give a very interesting temperature picture. The high pressure in the Pacific pumps the colder air down from the north into the United States, producing extensive negative temperature anomalies. The exception is the SE USA part, which is under more warmer westerly/southwesterly flow.
The positive NAO pattern with lower pressure in the North Atlantic keeps Europe under check with the more warmer westerly flow and milder weather. This does not mean that there will be no cold episodes in Europe, it just indicates that the pattern is not expected to be supportive for a lot of cold air outbreaks, or at least not for long-lasting ones. 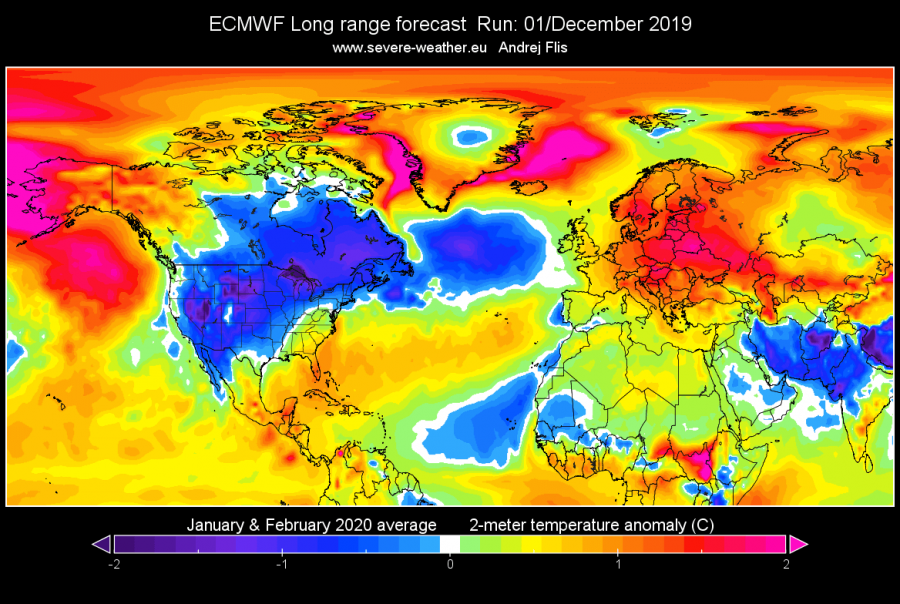 The pressure and temperature anomalies usually translate to snowfall patterns. As expected, we see less snowfall over most of Europe, with the exception of Northern Europe and northeast parts. We also see the Alps getting more snowfall. That is because the positive NAO pressure pattern promotes more westerly flow into the continent, which brings milder temperatures but also more moisture. Northern/Northeastern Europe and the higher parts of the Alpine region are cold enough for snowfall by default, either by being enough far north (Scandinavia, Russia, Iceland,…) or by being on high enough altitude (the Alps). Looking at the United States, we see more snowfall, which is expected under colder air, but the snowfall is more spread around, as it depends a lot on the availability of the moisture to produce precipitation and snowfall. 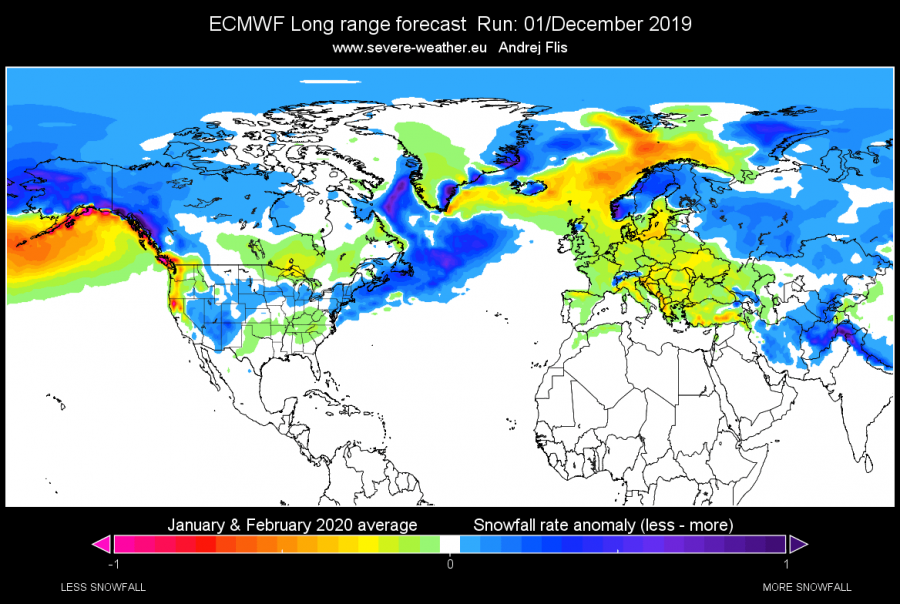 So far, we were focusing more on the ECMWF model. Looking over to its main competition, the UKMO long-range model shows a very similar story. High pressure in the Pacific, and positive NAO. Temperature-wise, we also see warmer Europe and colder air extension from Canada down into the Continental United States. 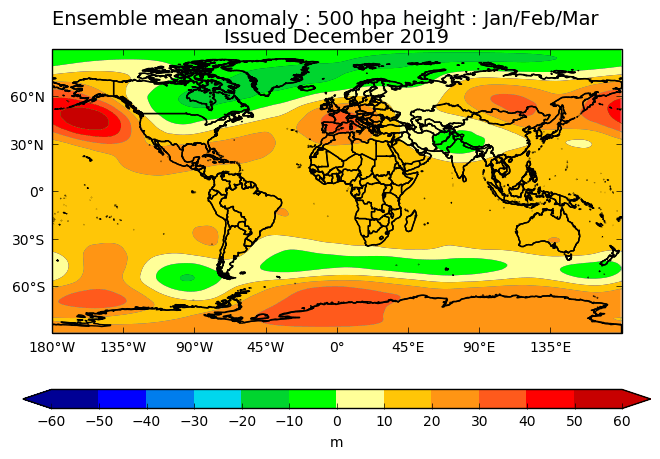 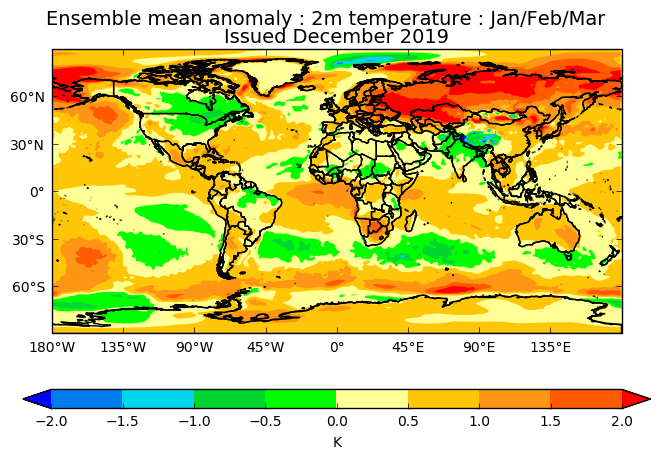 The main model competition to both UKMO and ECMWF, is of course the CFSv2 model, coming from the NCEP in the United States. It too tells the same story, with the obvious high pressure in the Pacific and the positive North Atlantic Oscillation (NAO). It does show warmer Eurasia, and also colder Canada, but does not do the extension of the colder air down into the continental United States, despite the pressure pattern supporting it.

We will keep you updated on any important further development. While you wait for more updates, don’t miss the unusual behavior of the red supergiant star Betelgeuse, which might soon explode in a spectacular supernova:

*Space* A red supergiant star, Betelgeuse, is losing its brightness and is unusually dim. The star could explode as a supernova, shining brighter than the full moon!