An impressive cyclone is moving over the Pacific this week (see the satellite below), expected to push its center into the WNW US coast tonight. An extremely deepening cyclone / bombogenesis will introduce dangerous string-jet wind maxima and major waves towards the coast, while also resulting in intense snowfall across the SW Oregon and N California!

Recap on the system by Michiel Baatsen in our SWE Report & Discuss group:

A very intense cyclone is expected to form over the NE Pacific, hitting the US West Coast tonight. Current model forecasts show this system deepening incredibly fast, with the central pressure dropping at 2-3hPa/h rates over the next 12-18h. Aided by the dynamics of both the subtropical and polar jet streams, this system is at the upper end of what is possible in terms of the extra-tropical intensification rate.
At its peak, the cyclone structure should acquire a typical warm seclusion structure with the possible formation of a powerful sting jet along the wrapping back-bent front. Here, wind gusts could reach speeds of up to 100kt/180km/h if these winds mix down to the surface. GFS vertical cross-sections nicely show the proximity of both upper-level jet streams and momentum exchange with the low-level sting jet, forming along the wrapped warm front. 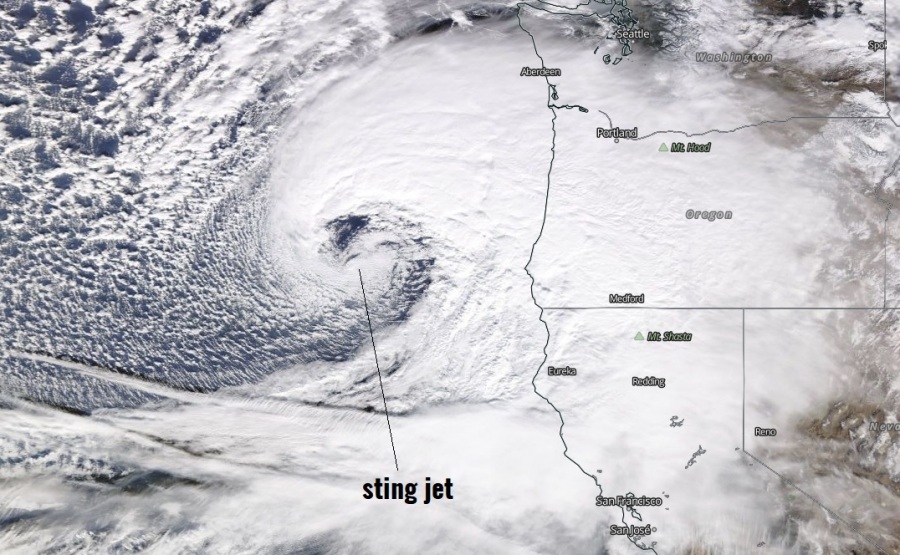 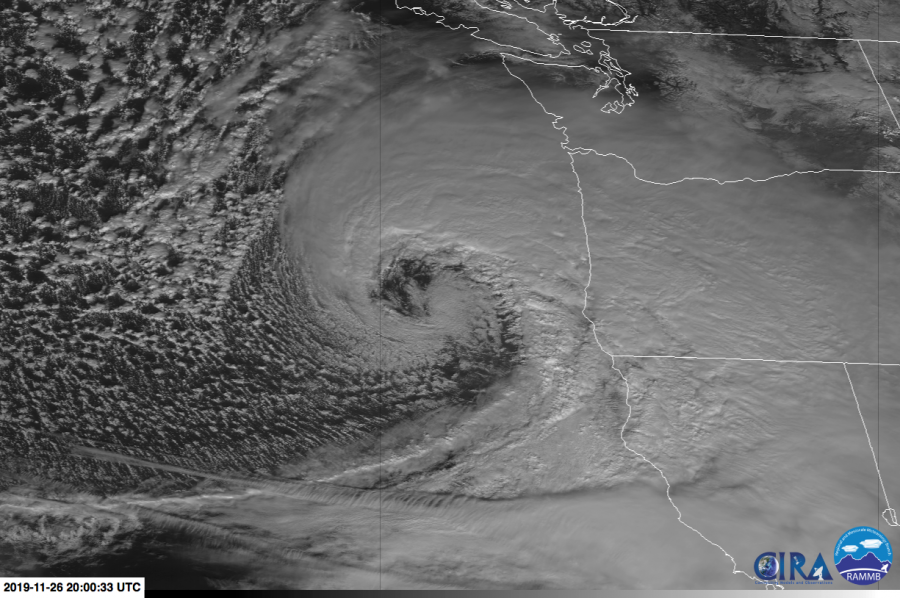 500 mbar geopotential heights chart indicates a very deep upper trough / core moving into the NW Pacific coast, while a strong ridge is developed over the N Pacific. Trough will move into the W CONUS tonight. 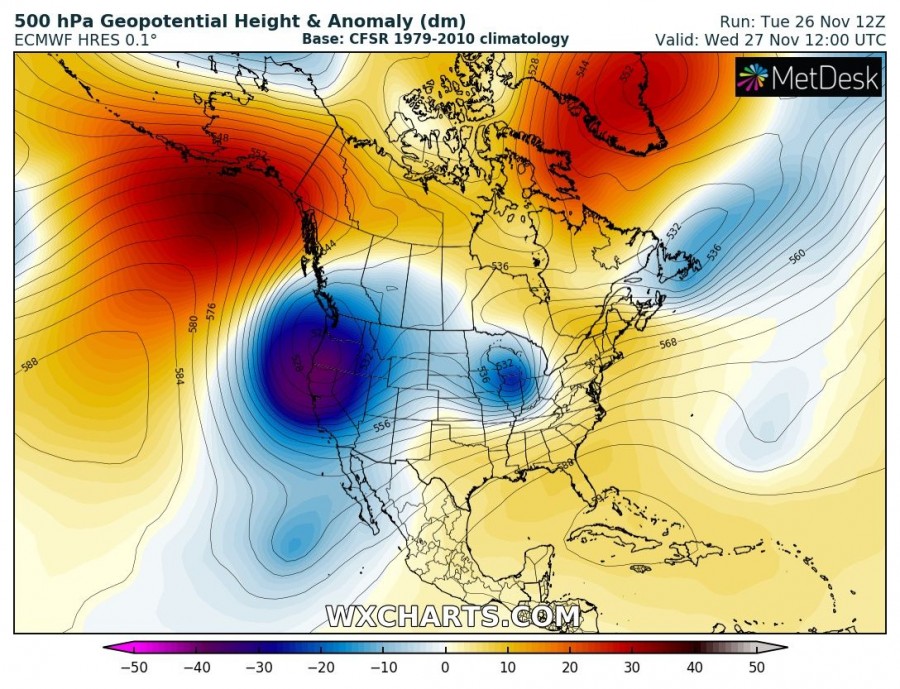 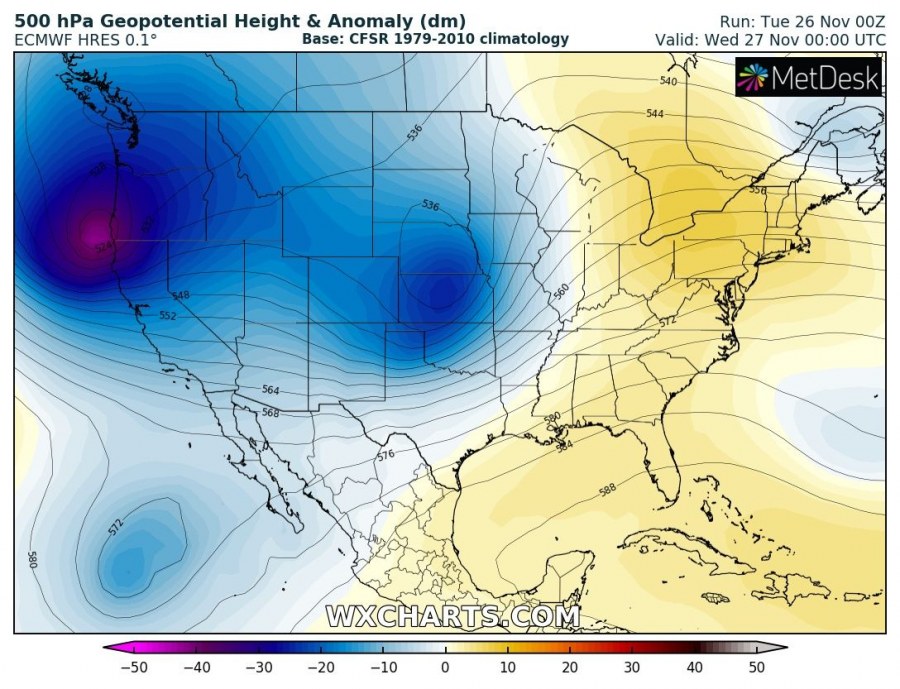 500 mbar pattern across the US. Graphics: WXCHARTS

Surface cyclone is moving southeast and will come ashore on CONUS near the state border of S Oregon and N California tonight. Intense frontal boundary is visible on the models, supporting heavy rainfall along the cold front over the sea while intense snowfall is developing inland over SW Oregon and N California. As cyclone tracks further SE overnight, it delivers more intense snowfall into the Sierra Nevada mountains. 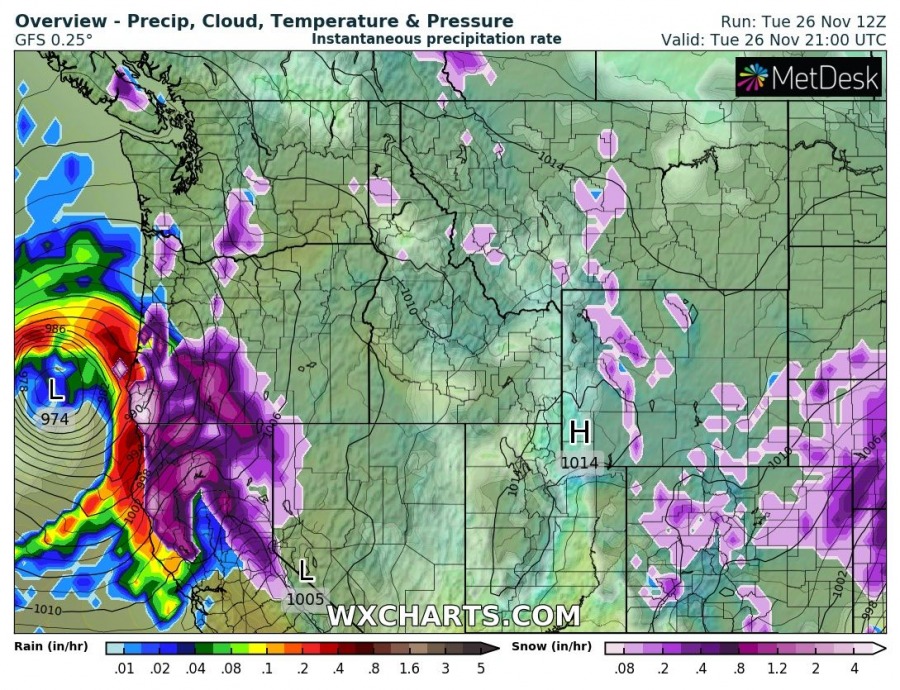 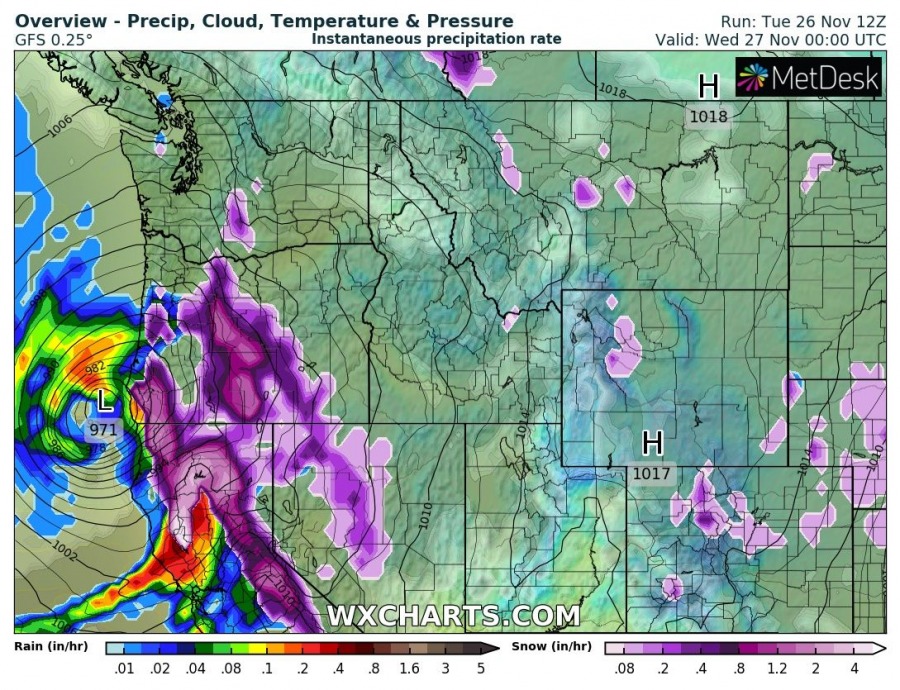 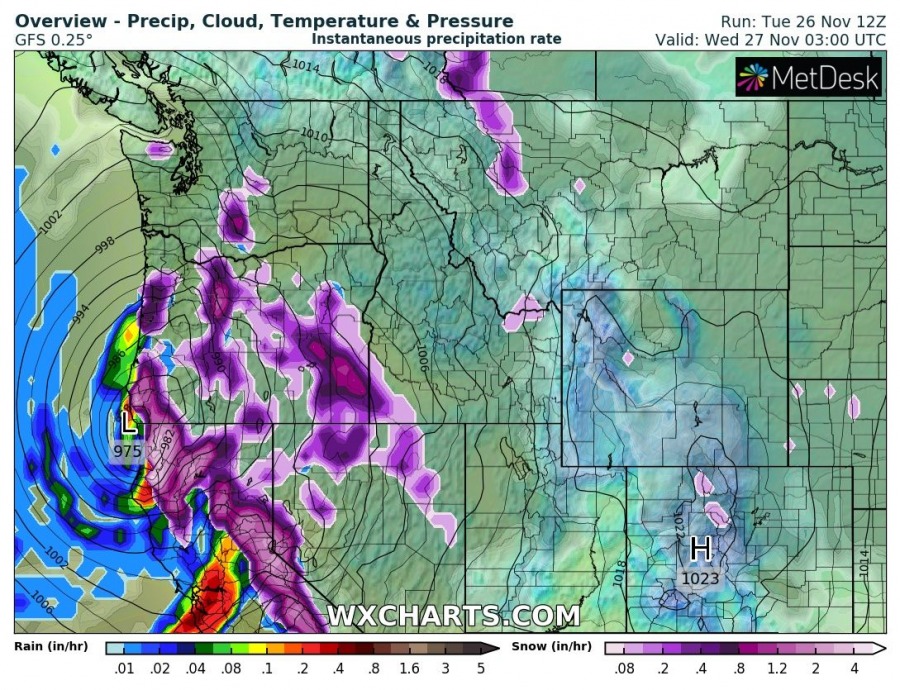 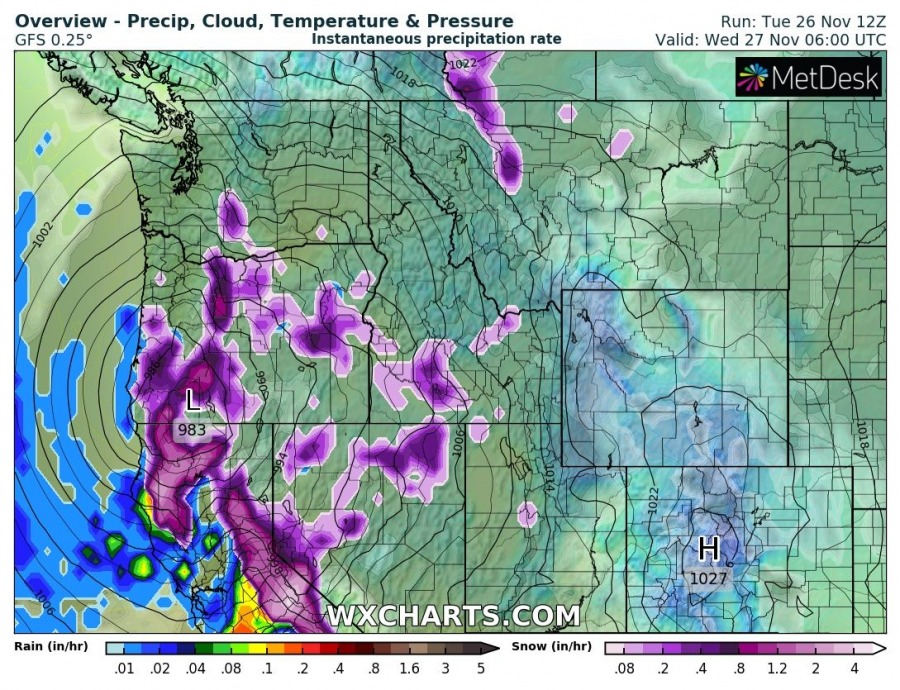 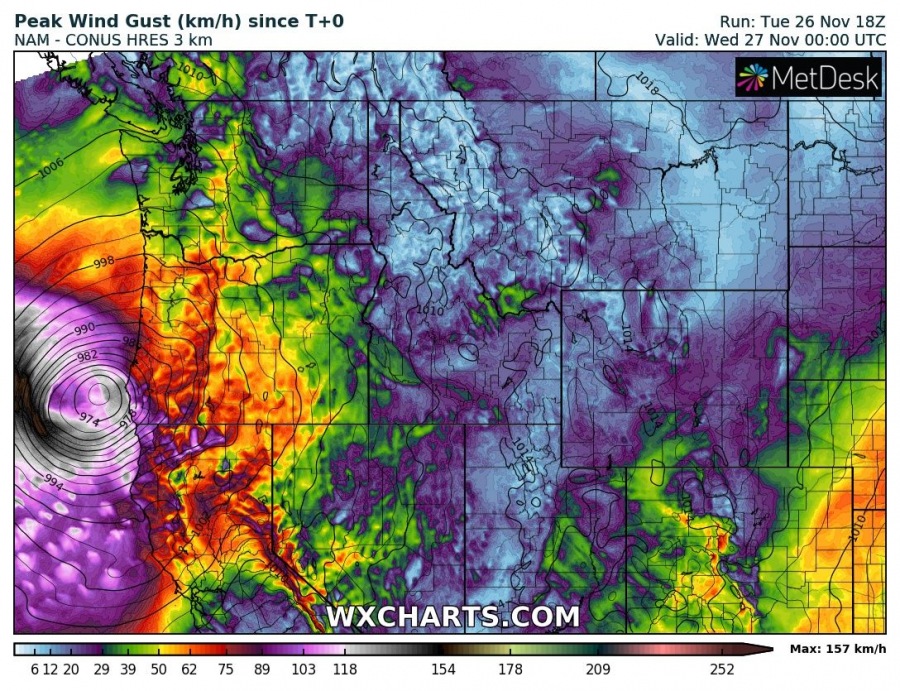 Huge amounts of snow are expected across the higher terrain of SW Oregon and across the Sierra Nevada mountain range in California – locally 20-25 inches (50-75 cm) within a period of less than 24 hours! 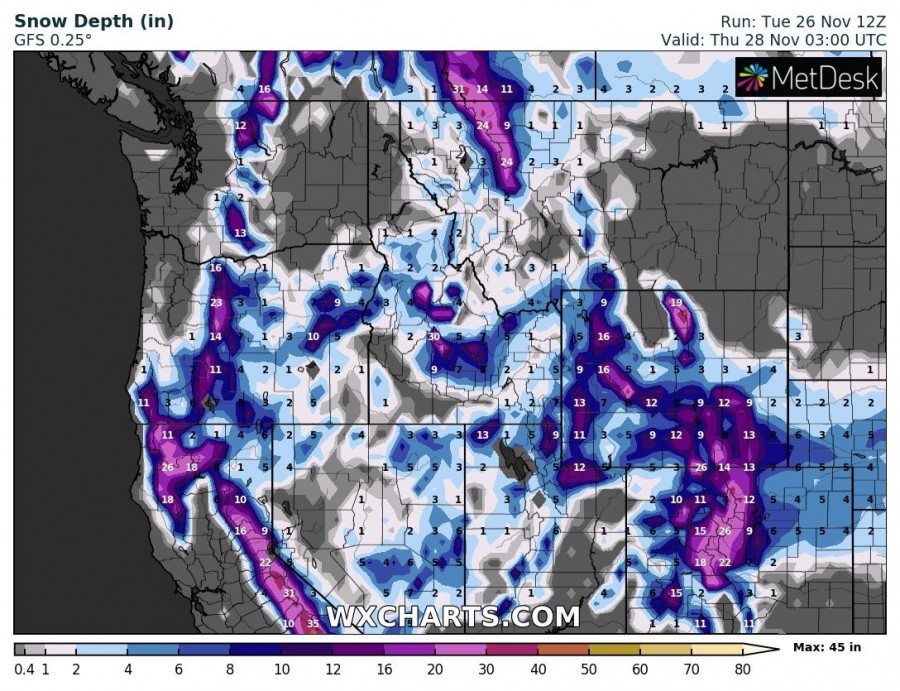 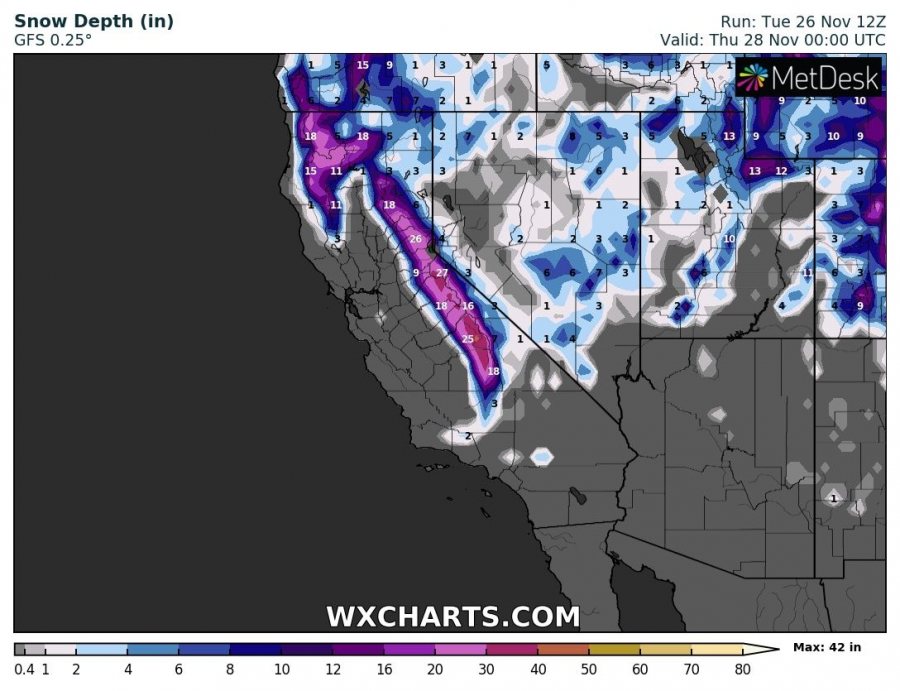 A major winter storm is expected to impact northwest California and southwest Oregon Tuesday and Wednesday. This is not an ordinary storm! Significant impacts are expected, and weather should be factored into any holiday travel plans. #CAwx pic.twitter.com/Xs4heyWNhT 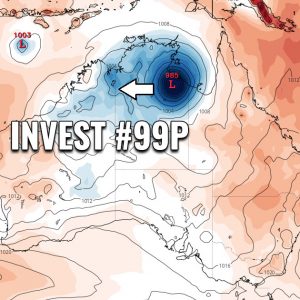 «Next Post *FRIGID* cold spreads across northeast Russia in these days – down to -54 °C has already been reported in Verhojansk!
An intense cyclone brings severe storms into SE USA while heavy snow blizzard develops on its wake across the Great Plains Previous Post»