January is the second winter month. It was far from wintery across many parts of the Northern Hemisphere mid-latitudes. January 2020 was the warmest January on record.

After a relatively winter-poor December in Europe and some other places across the Northern Hemisphere, we continued January in a very similar fashion. The pressure analysis from the JRA-55 dataset shows the very strong and persistent low-pressure area in the North Atlantic, extending into the polar regions. This is a typical positive North Atlantic Oscillation  (NAO) and positive Arctic Oscillation (AO) circulation pattern. You can learn here what is the AO and the NAO and how they affect our weather. We can see high pressure over Europe, and the North Pacific. 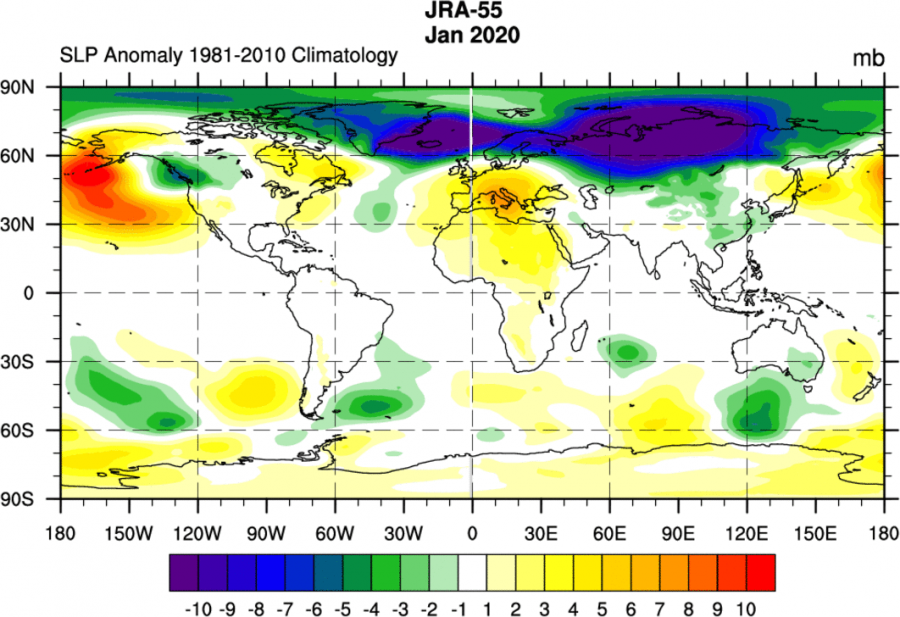 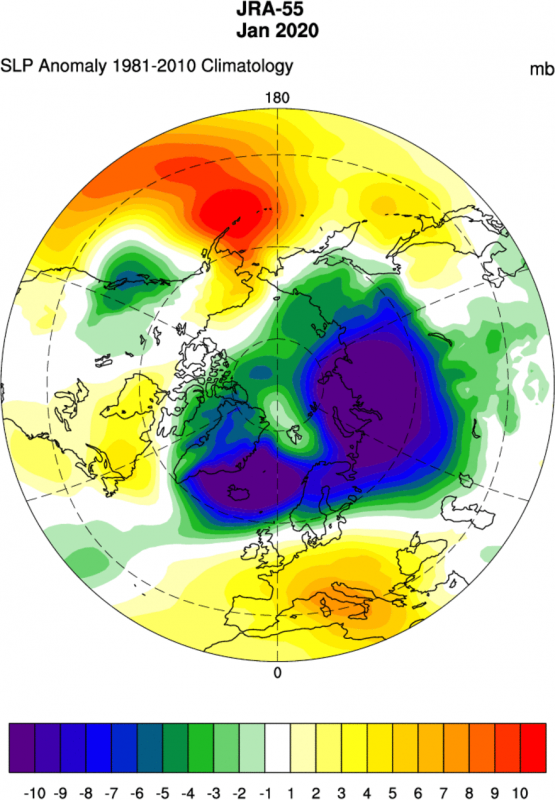 Looking at the lower stratosphere levels (100mb/~15km), we can see the polar vortex was stronger than normal, connecting with the troposphere, sustaining the NAO and AO positive, and keeping the colder arctic air on lockdown in the polar circle. The second graphic shows the vertical negative pressure anomaly in the troposphere and into the mid stratosphere, resulting from a stronger than normal polar vortex in the entire atmospheric column. The result was a sustained strong positive AO response, that still lasts into February. This circulation mode is primarily responsible for the sustained warm episodes over Eurasia and parts of North America, as the colder polar air is locked closer to the polar circle. 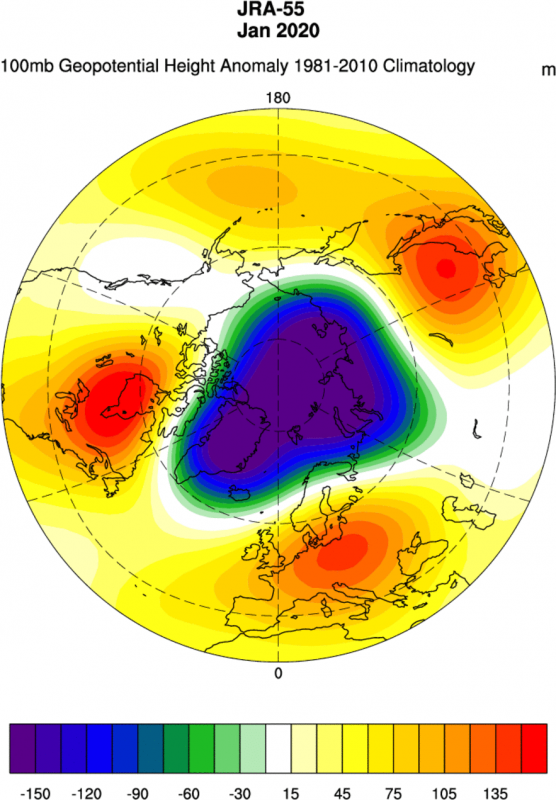 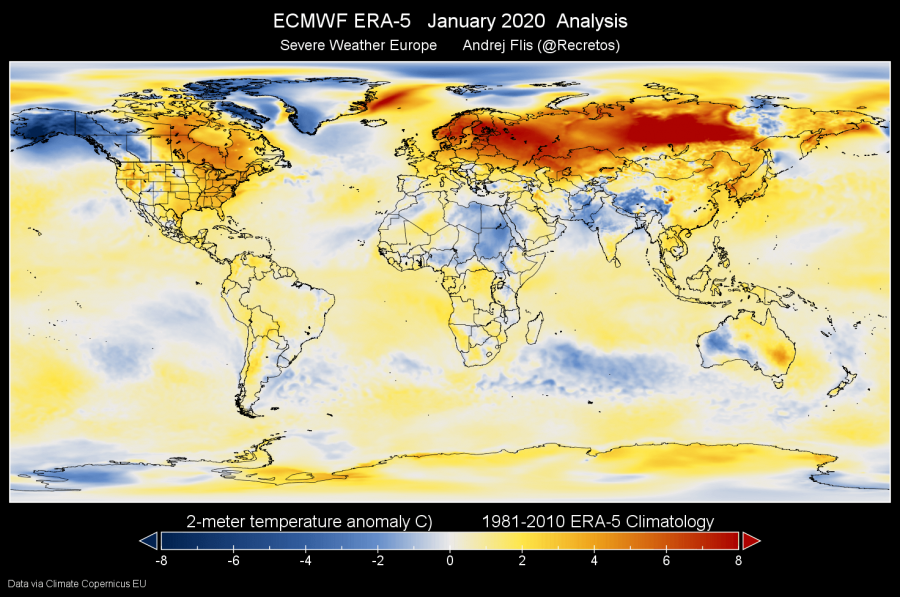 Zooming in on Europe, we can see the sad face of pretty much winterless Europe, or at least far from what it should have been. In Europe this month was 3.1°C warmer than the average of January in the period 1981-2010. It was also warmer than any other January in this data record, defeating January 2007 by 0.2°C, which was the previous warmest January in Europe. Especially warm was across Scandinavia and into Russia. Norway had its warmest January day on record, and the whole month was the second warmest in Norway since 1900. In parts of Russia, January 2020 was over 10°C above the 1981-2010 January average! We can see some negative anomalies over the south and southeast Europe, where there were a number of cold air intrusions from the north and northeast. An interesting patch of normal to below-normal temperatures is over Hungary, east Croatia and northern Serbia, where some average to below-average temperatures were recorded, due to a temperature inversion and fog cover, creating “artificial winter” conditions. 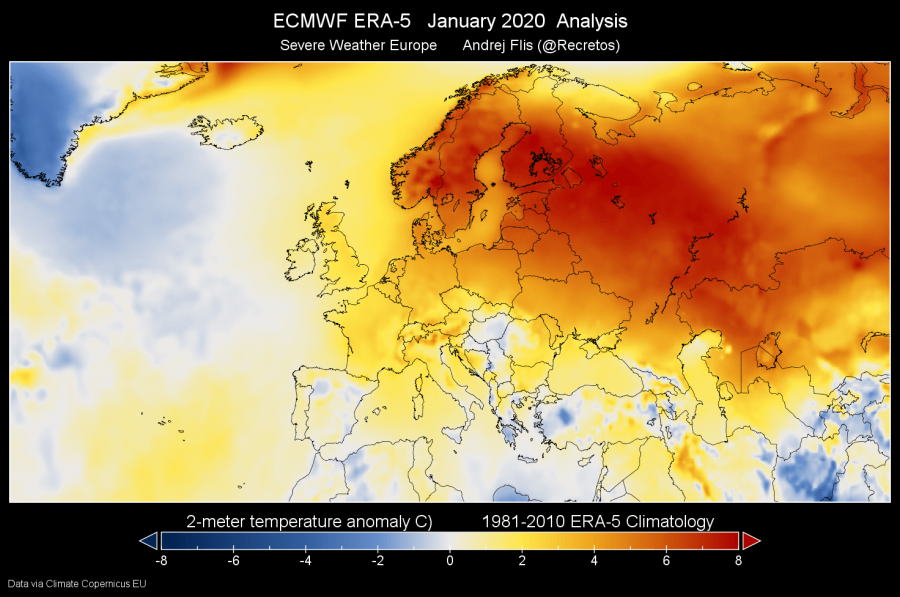 Looking over to North America, we can also see the large area of above-normal temperatures. Temperatures were substantially below average over Alaska and north-western Canada, and over Baffin and Ellesmere Islands in north-eastern Canada. Greenland was also below normal, due to the presence of the lower pressure systems and the Polar vortex core, circulating around some of the colder polar air.

Africa also features an interesting anomaly patter. Parts of northeast Africa actually recorded below-average temperatures. That was due to the colder than normal airmass being transported from the north, across southeast Europe, on the eastern side of a persistent high-pressure system. 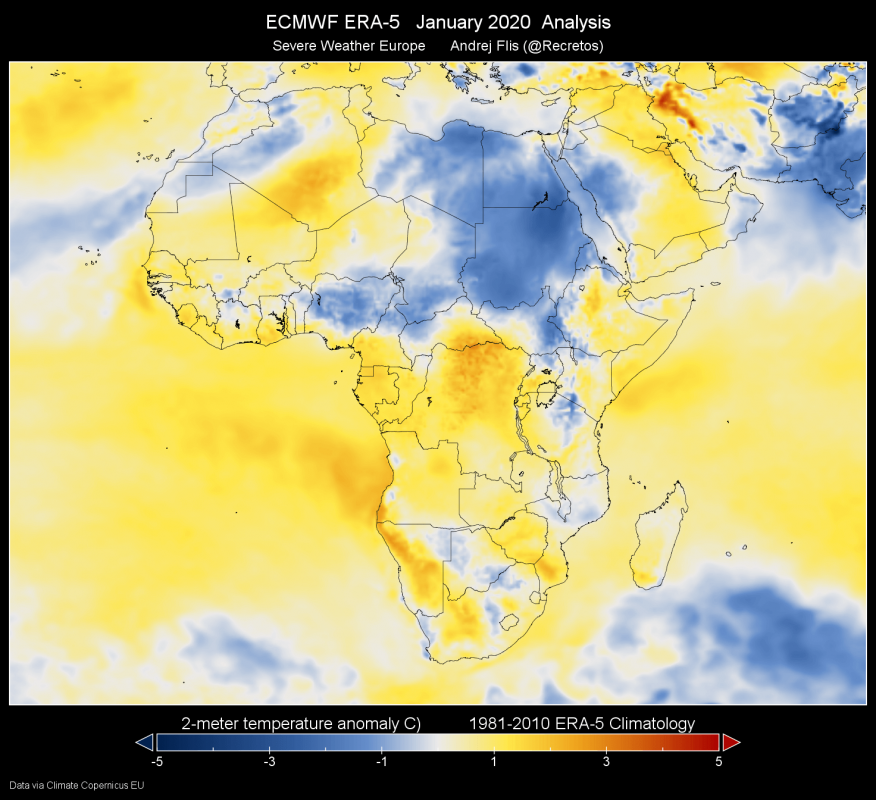 Jumping over to Australia quickly, January is actually a summer month there, as it lies in the Southern Hemisphere. East and northeast Australia featured quite above normal temperatures in regular heatwaves. Western parts, on the other hand, were actually colder than normal. 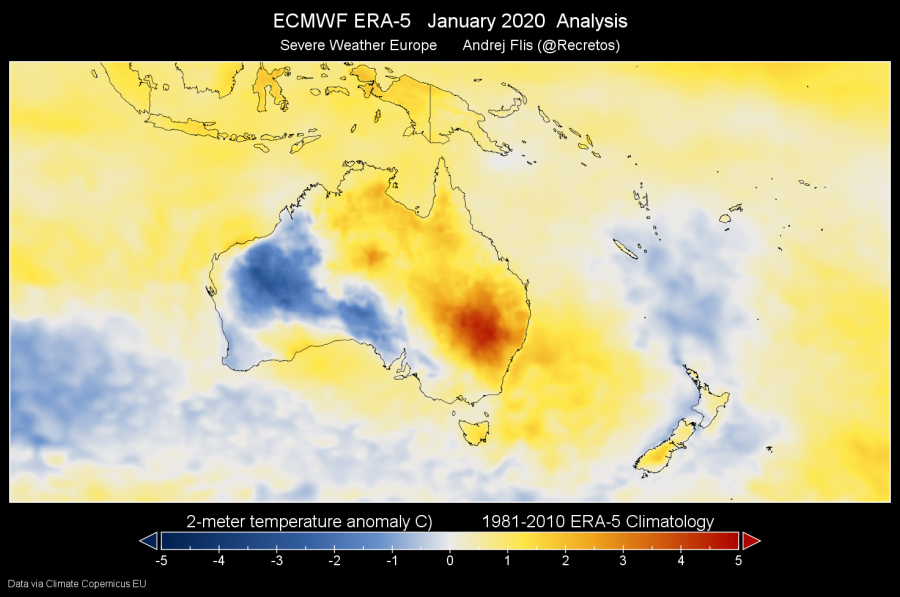 The past 40 years of data shows the warm January 2020 in the very end. We can see the warm spike in the 2016-2017 period, due to a strong ElNino event in the tropical Pacific ocean. Darker bars represent every January in the past 40 years. The graphic is provided by Copernicus EU project and is made from ECMWF ERA-5 data.

Looking at winter so far (01.Dec-03.Feb), the above-normal continents are the main theme of this winter. Overall, the winter period so far is 0.6°C warmer than average globally. Of course, in the Southern Hemisphere, there is currently summer. 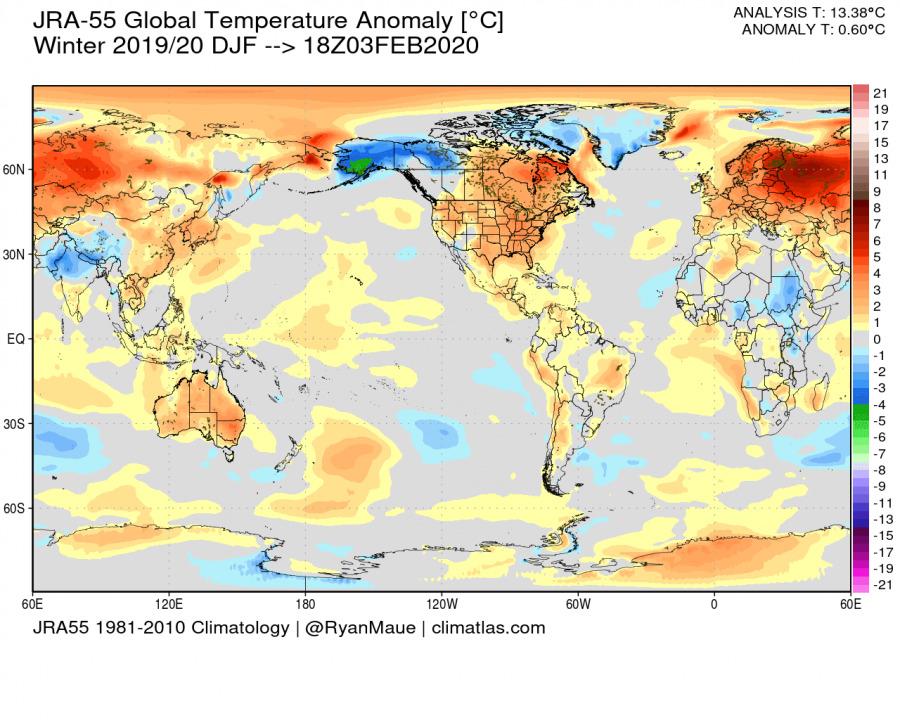 Last but not least, looking at precipitation, we can see the mostly drier conditions across central and southern Europe. The exception is eastern Spain, where there was an exceptional rainfall event, due to an upper low system. Northern Europe is also wetter than normal, due to the persistent warmer moist westerly flow from the Atlantic. 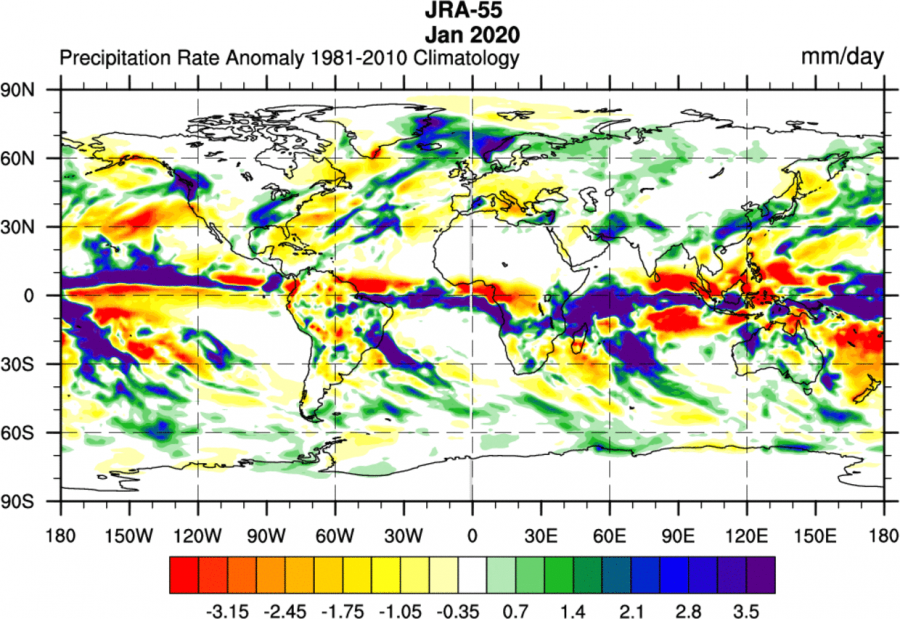 We will keep you updated on the future trends and analysis. In the meantime, don’t miss the February 2020 trends and the early look at Spring 2020: