The state of Alaska is experiencing an unusually cold Arctic blast this week, with temperatures forecast to reach close to -50 °F in some areas this weekend. Therefore challenging its 100+ years old all-time temperature records with this extremely cold air mass arriving from the Arctic Ocean. The cold pool could then turn towards the Contiguous United States next week, resulting in very cold mid-April.

A large part of North America has been under the effect of pretty mild weather recently, as a strong warm wave overspread the continent, following the record cold into the northeast and East Coast of the United States on April Fool’s Day. But outside the Lower 48, the state of Alaska has been pushed into a deep freeze with record low temperatures this week.

The National Weather Service has reported that Bettles and Fairbanks hit their record lows -33 °F and -24 °F respectively on Tuesday. Now the weather model forecast calls for even colder temperatures into this weekend, potentially challenging the all-time low-temperature records for April in some areas across the state of Alaska.

Similar to the Arctic cold outbreaks across the North American continent during winter, a southern edge of the upper-level lobe associated with the Polar Vortex aloft developed a deep cold-core over the Arctic Ocean. The air mass is now being gradually spreading south into Interior Alaska, which could bring record cold temperatures on Friday into the coming weekend.

Tonight, the pool of very cold Arctic air mass is gradually intensifying while spreading into Alaska from the Arctic Ocean, forecast to peak Friday night through early Saturday across Interior Alaska. Then spreading east into the Yukon Territory of northwestern Canada towards Sunday.

According to the staff from the University of Alaska at Fairbanks, temperature could drop to almost 50 °F below the average for early April, with lows well below -40 °F in some areas across the state. And could rival the all-time Alaskan low-temperature record of -50 °F (= -45.6 °C).

Temperatures in Fairbanks are forecast to reach around -30 °F through Friday night into Saturday morning, which is nearly 50 degrees below average. The record low for the city is -32 °F, so this weekend’s temperatures might not be far from the historic levels.

Actually, Interior Alaska hasn’t experienced such an extremely cold blast in the month of April for decades. The last one was more than a century ago, in the days of April 9-11th back in 1911. And this weekend, those could be challenged in Fairbanks as the forecast low is minus 30-32 °F also on Saturday morning.

Also, Fairbanks might set a new daytime record this Friday as forecast High could stay below 10 °F that would be the latest single digits record temperature, as the Apr 8th is currently the latest “below 10 °F” day on record.

The temperature drop in Fairbanks will be very extreme, even for Alaska’s standards. The 850 mbar (around 1250m ASL) temperature on Saturday morning will be around 45 °F (25 °C) lower than the long-term average for early April. 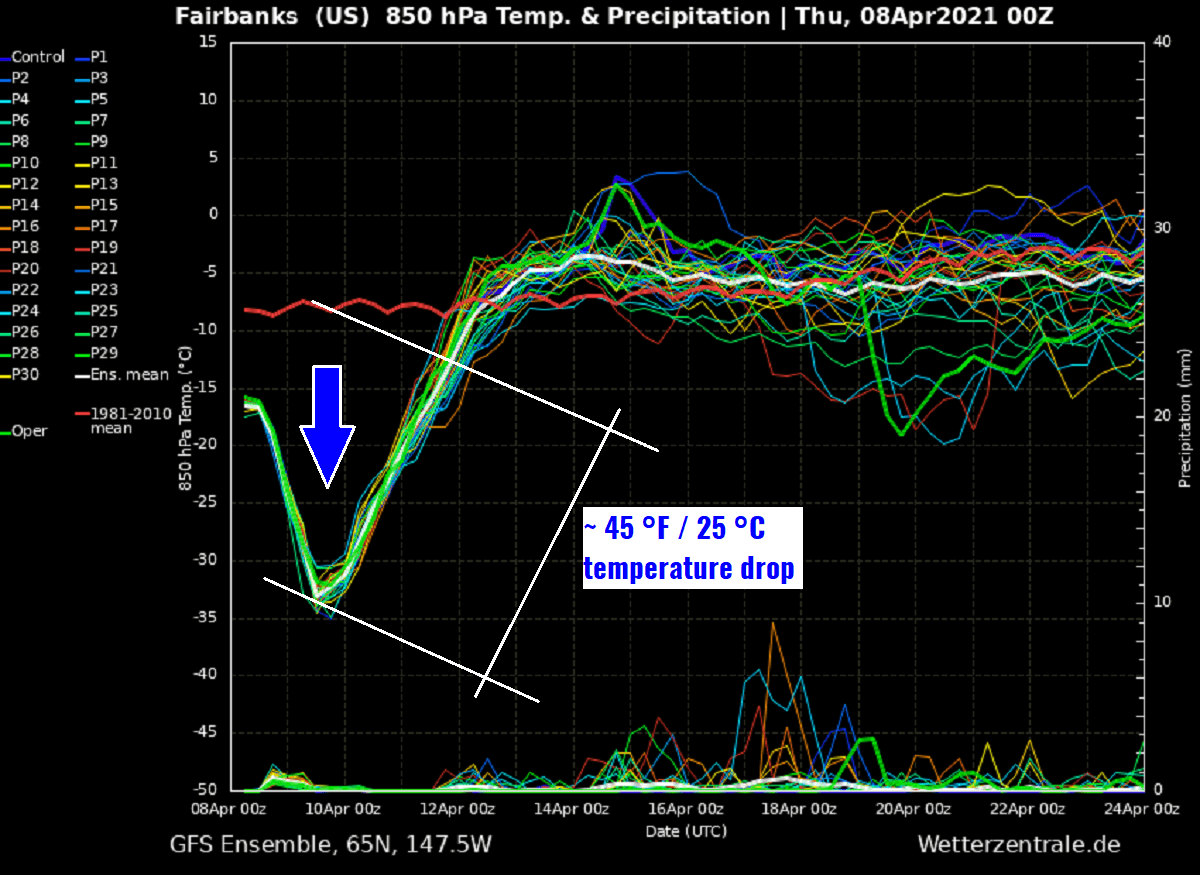 As we can see, Fairbanks will keep setting the record higher as more cold days are forecast.

Although it is already April and the state of Alaska is normally coming out of the harsh, frigid cold from the Arctic region, the weather gods just don’t give up yet. The upcoming weekend is about to challenge Alaska’s all-time temperature records as temperatures could plummet close to -50 °F in some areas. More than 40 to nearly 50 °F below-average Arctic cold blast peaks late Friday into Saturday. 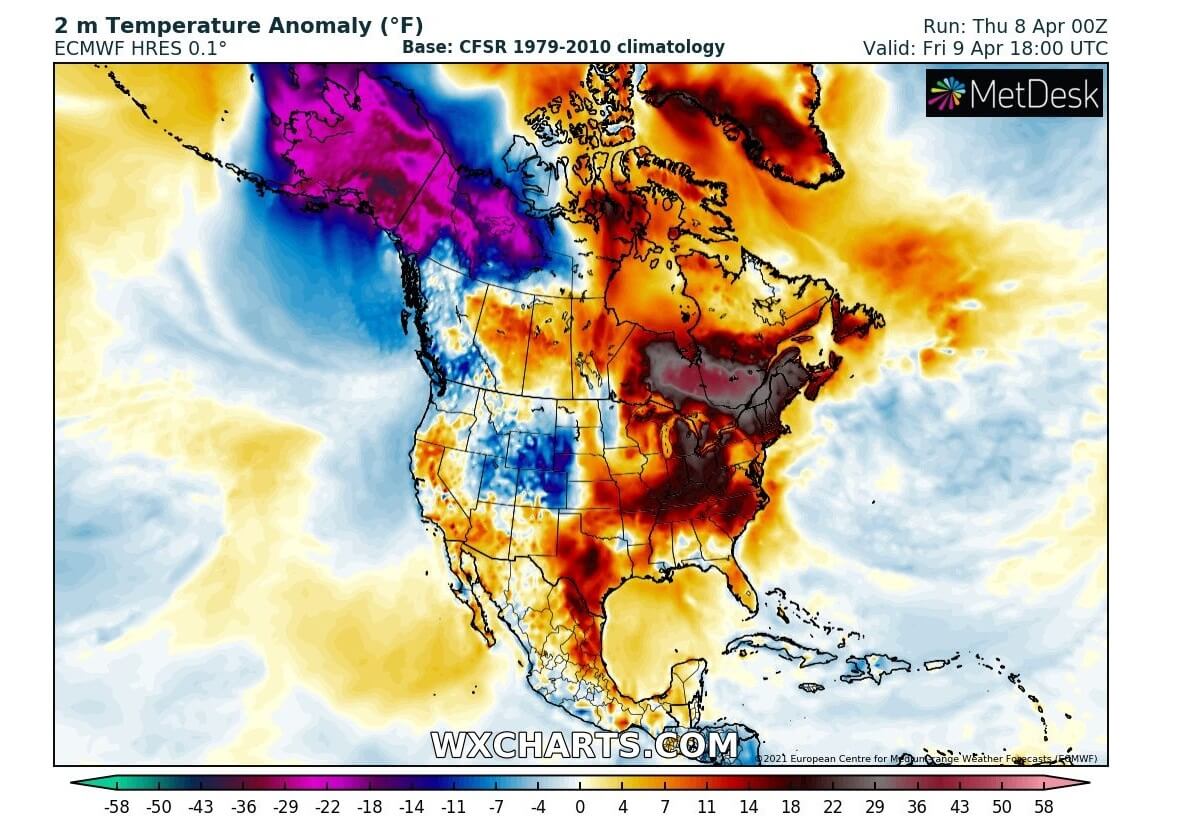 The cities of Anchorage and Fairbanks, Alaska has temperatures just above freezing in early April (the mid to upper 30s)m gradually warming to near 50s by the end of the month. So far, this month, temperatures in Interior Alaska were quite well below normal for early April, with about 15-17 °F below average.

And according to the weather models, Fairbanks will remain in a deep freeze in the coming days as the Arctic cold worsens. This Friday, the Apr 9th, the temperature will not even reach 10 °F (-12 °C) in Fairbanks, about 30-35 °F below normal for this time. 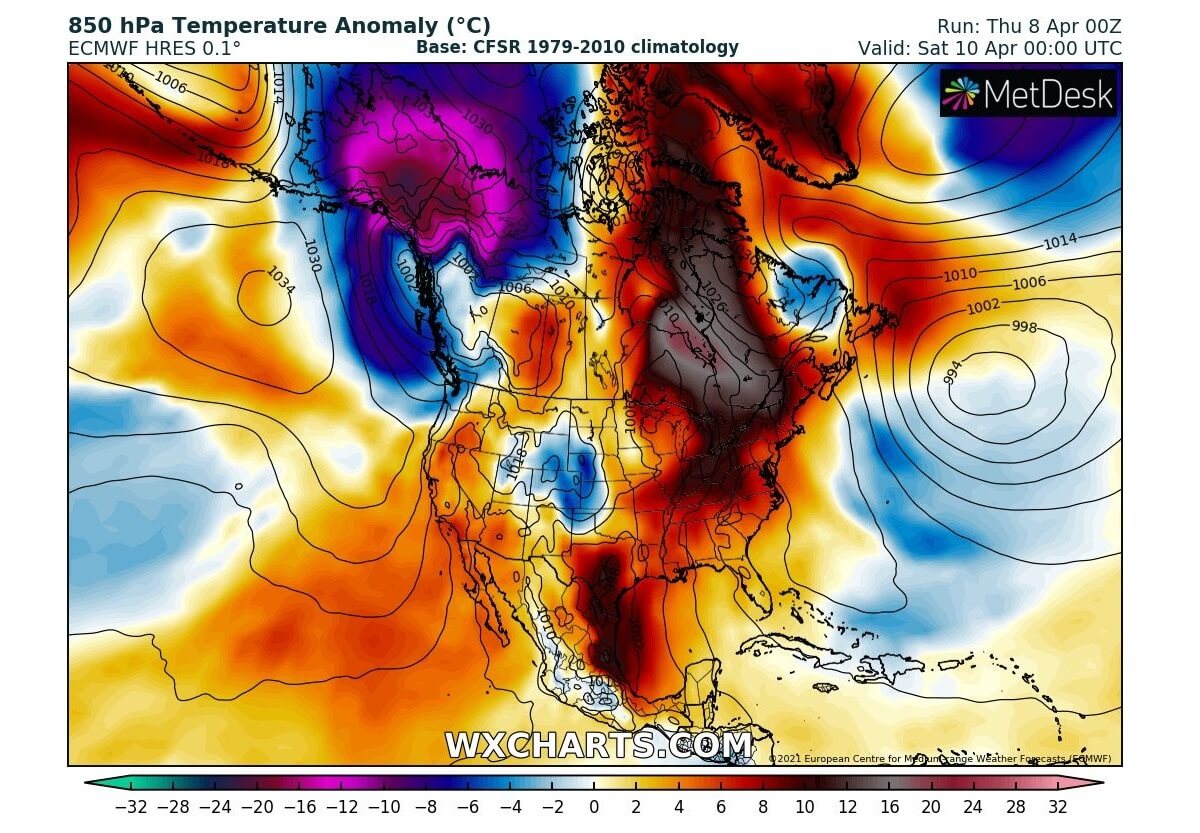 According to a climate specialist Rick Thoman at the University of Alaska, Fairbanks, “The next three days will bring historic-level cold for this time of year to parts of mainland Alaska. The state record low for April of -50 °F (-45.6 °C) might be broken”.

So the cold that’s about to peak over Alaska this weekend is significantly extreme for this time of year. Saturday will be the peak of the cold, being the strongest across eastern Alaska and western Yukon Territory.

The driver behind this potentially historic Arctic cold for Alaska this year is the upper-level (wind) pattern. Thanks to the polar jet stream digging quite far south over the Bering Sea and the Gulf of Alaska, allowing an extremely cold lobe of the Polar Vortex to spread into the Alaska mainland. This would be more typical for the winter months, but spring 2021 keeps challenging the climate records.

As we can see from the chart below, the jet stream wind speed will be around 160 knots in its core at the height of 250 mbar. This is quite intense. Thanks to the strong blocking ridge over the North Pacific and deep upper low over the Arctic Ocean, the northwesterly wind maximum in between significantly increases. 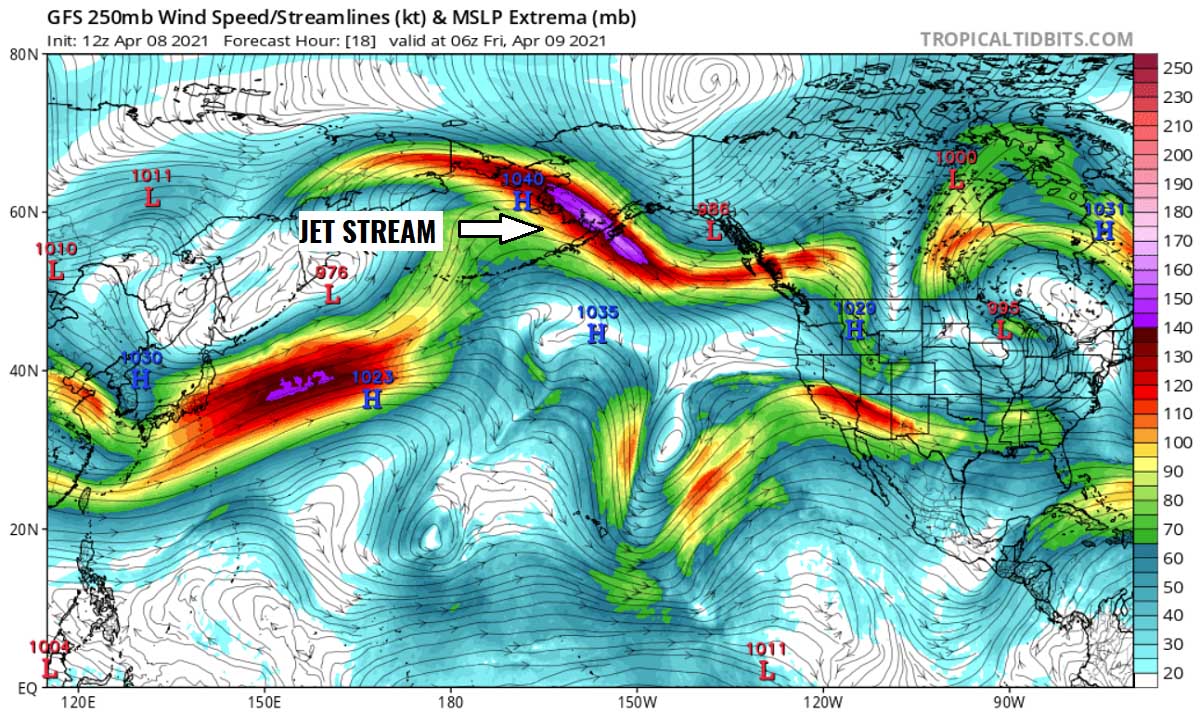 Creating favorable conditions for Arctic cold air mass intrusion towards the south, over the state of Alaska, and towards Yukon Territory.

Such an extreme cold will be life-threatening for residents spending time outdoors. There will be a high risk of hypothermia and frostbite of exposure outside for a longer time.

The cold will be gradually decaying through Sunday, allowing the cold blast to losing its strength. Thanks to another deep low from the Northwest Pacific enters the Aleutian Islands and the Bering Sea.

WARMTH RETURNS NEXT WEEK, BUT THE COLD POOL COULD TURN TOWARDS CONTIGUOUS UNITED STATES

After the weekend, temperatures are finally forecast to climb higher as the Arctic cold pool will gradually retreat back and east into the Yukon Territory of northwestern Canada. Alaska will see quite strong warming up from the west, thanks to the general weather pattern flip with deep low over the Aleutians and the Gulf of Alaska, sending much warmer weather into Interior Alaska and northwestern Canada. 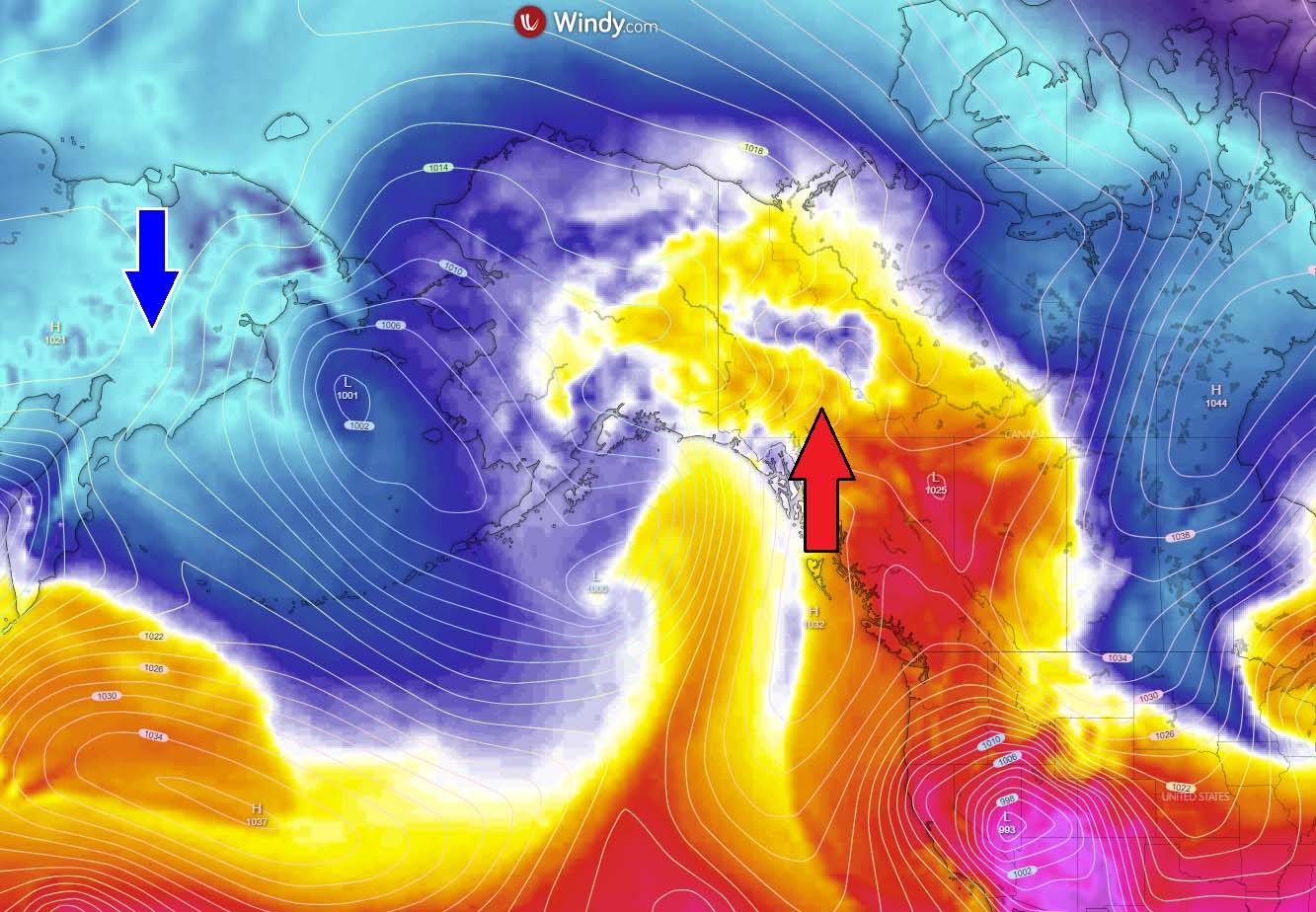 Temperature over Alaska next week could be around 15 °C above normal, so a very significant warm wave would replace the ongoing Arctic cold blast, with 40-50 degrees Fahrenheit warmer weather arriving just about a week later.

It also has to be noted that the overall weather pattern across the North American continent might then push this Arctic cold towards southern Canada and potentially also into the Contiguous United States next week. If the weather model guidance verifies, temperature could plummet well below freezing again with nearly 20 °F below-average period into mid-April. 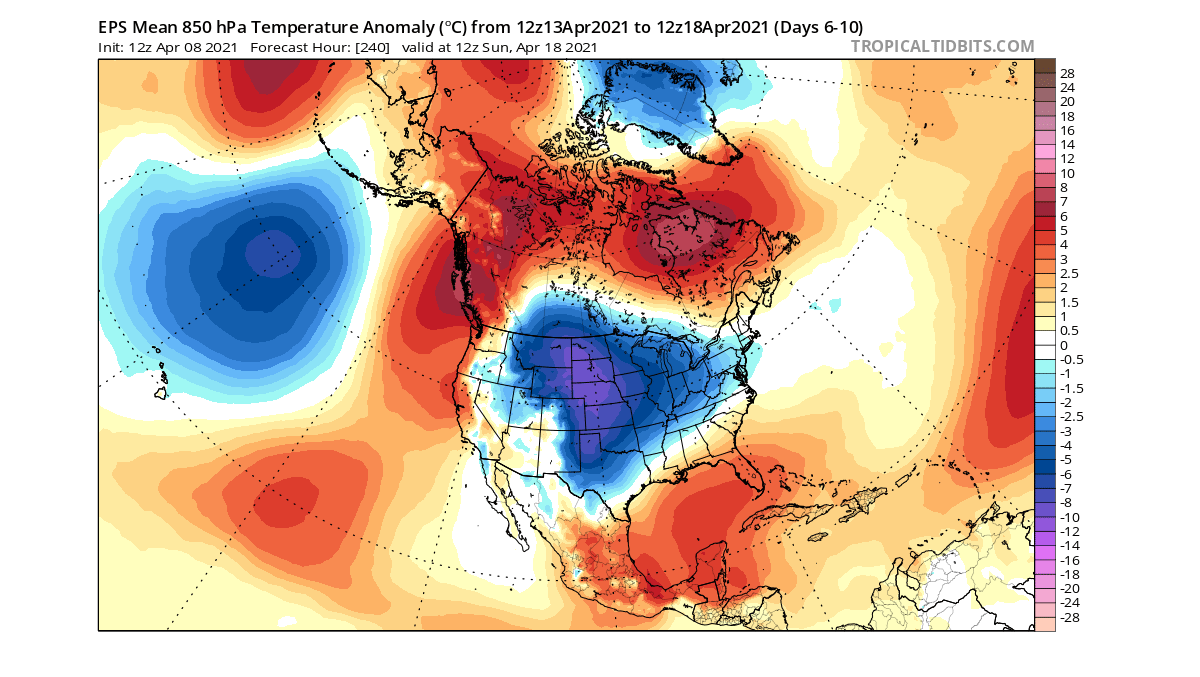 We are closely monitoring the ongoing Arctic cold blast into the continent and its further evolution next week. An update on the forecast trends will follow in the coming days – stay tuned.

Slovenia beats the all-time national record with below -20 °C this morning. Numerous nearly 100 years old records broken with extreme cold across Europe
← Previous
Very active tornado Season continues into the month of April, with more severe weather expected across the South and Dixie Alley this weekend
Next →
Comments are closed.