This spring is really interesting as far as weather patterns go. Winter featured more spring-like patterns. But as soon winter was over, the Northern Hemisphere spring has shifted into more winter-type patterns. Early May forecast features a cross-polar flow pattern into North America, which is much more typical for winter months.

The two images below show the 2-meter temperature anomaly for the entire world. The first image shows April (so far), where we can see that the month was quite colder than normal across much of North America. The exception was Alaska, and the southeastern United States, where record warmth was recorded for April in Florida. Europe was mostly warmer than average over western and central parts, but cooler further east. Exceptionally above-average temperatures were measured over Siberia, and over the North Pole. On week 3 of April, a “heatwave” was ongoing from Siberia into the North Pole, raising Arctic temperatures more than 20°C above normal in the Arctic. Cooler conditions were present over the Indian subcontinent and in parts of China and Japan. 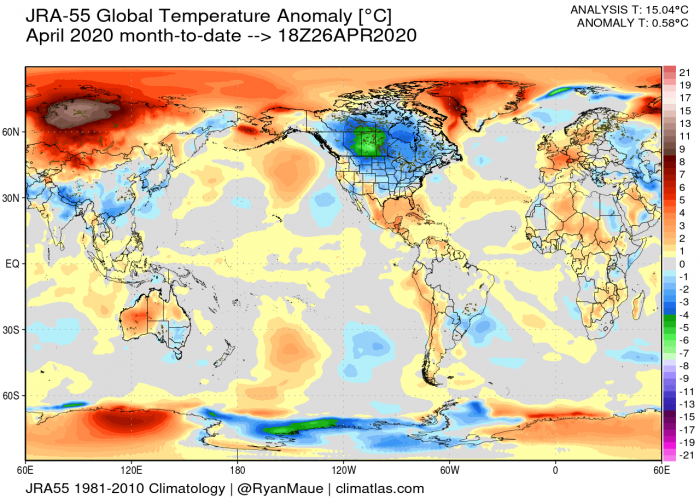 The second image shows temperature anomalies for the past winter of 2019/2020. Here the weather pattern was quite different, looking more like spring than winter. The temperatures followed the pattern, as we can see most of North America and the entire Eurasia warmer than normal. Colder conditions were present in Alaska, Greenland, and over the Indian subcontinent.
Both images really show the difference between weather patterns in winter and spring. The sharp “wave-like” changes in temperature anomalies really show the more dynamic pattern in April. 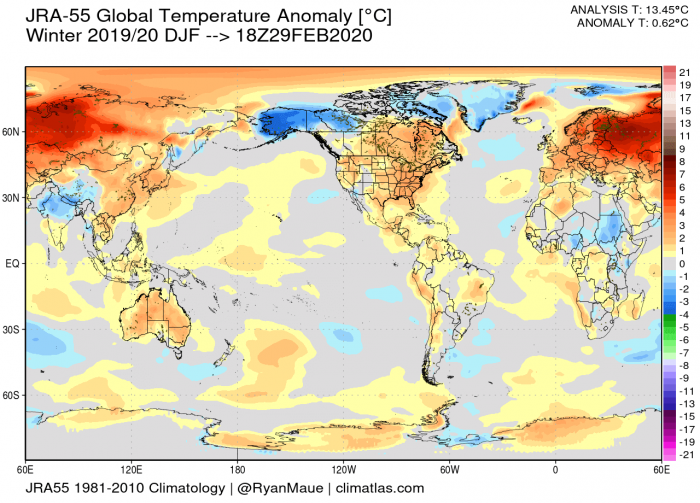 The May forecast starts the month on a very dynamic note as well. The low-pressure systems are fragmented across the hemisphere, creating a very unstable and wavy jet stream. The exception is the jet stream across the United States, which is more zonally (west-east) oriented. A ridge across the United States will bring warmer temperatures into the country, but a new cold front will already be descending from the north.
A strong ridge will expand from the Azores into western Europe, bringing a warmer airmass into the region. At the same time, it helps to pull colder air into eastern Europe, dividing Europe into two temperature regions. 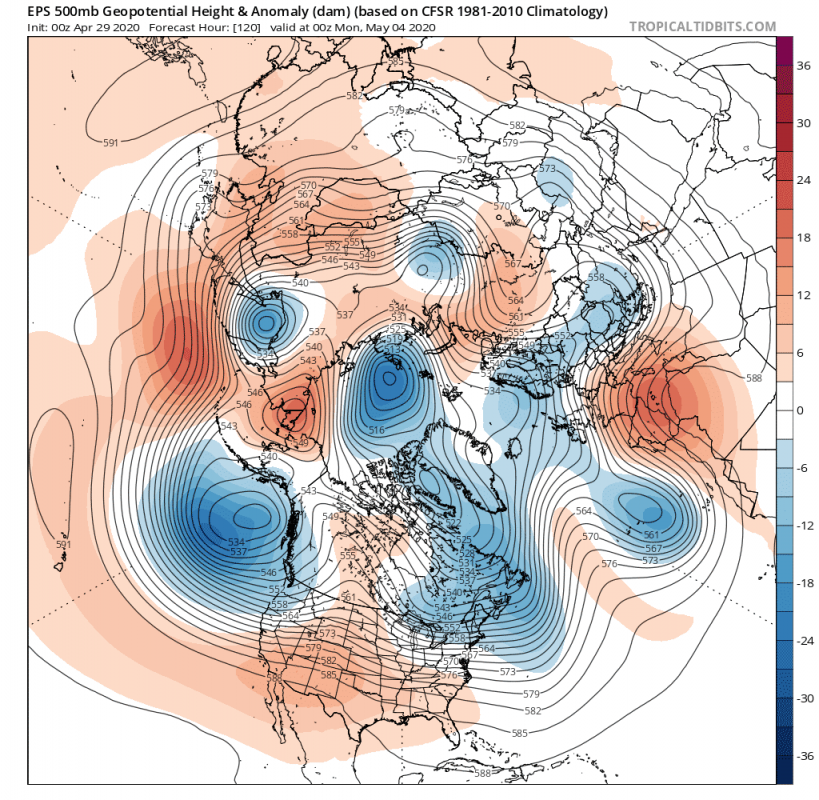 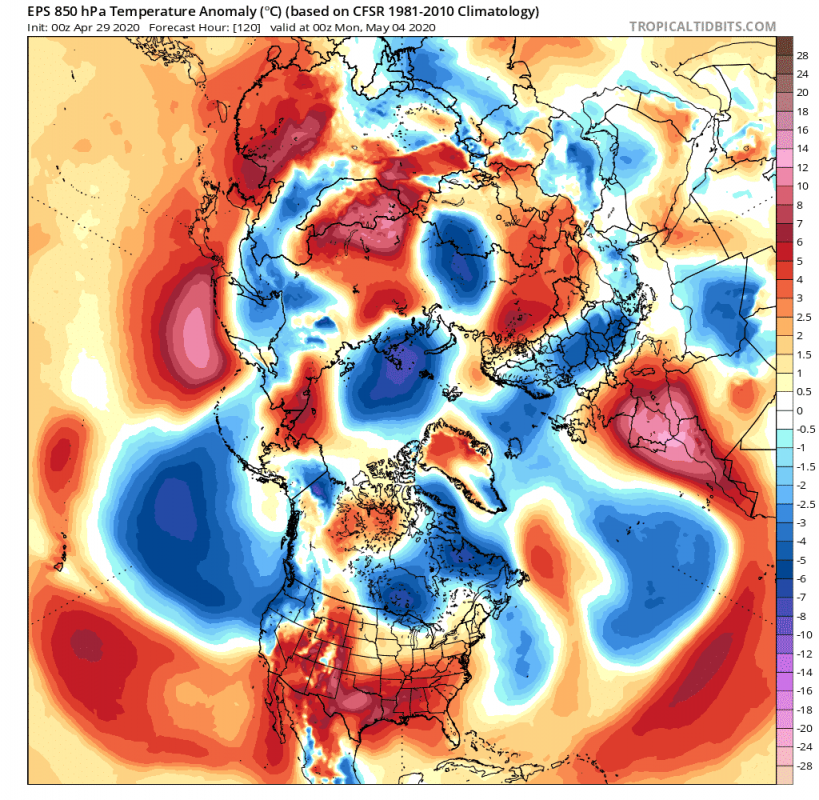 The important feature in the pattern development is also the North Pacific. There we have an Omega ridge over Alaska, named after the Greek letter Omega, having a very similar shape. Together with the low-pressure systems over the Arctic Ocean, Greenland, and eastern Canada, they will create a cross-polar flow pattern. As the name suggests, that means the cold air will flow across the entire polar region, straight down into Canada and the United States, seen on the temperature forecast image below. A cross-polar flow pattern is very untypical for May. It is mostly present during winter months when it usually results in the harshest winter conditions across the central and eastern parts of the United States.
In Europe, we still have the dominant ridge, which will bring warmer airmass from north Africa into western Europe, while transporting colder air from the north into eastern Europe. 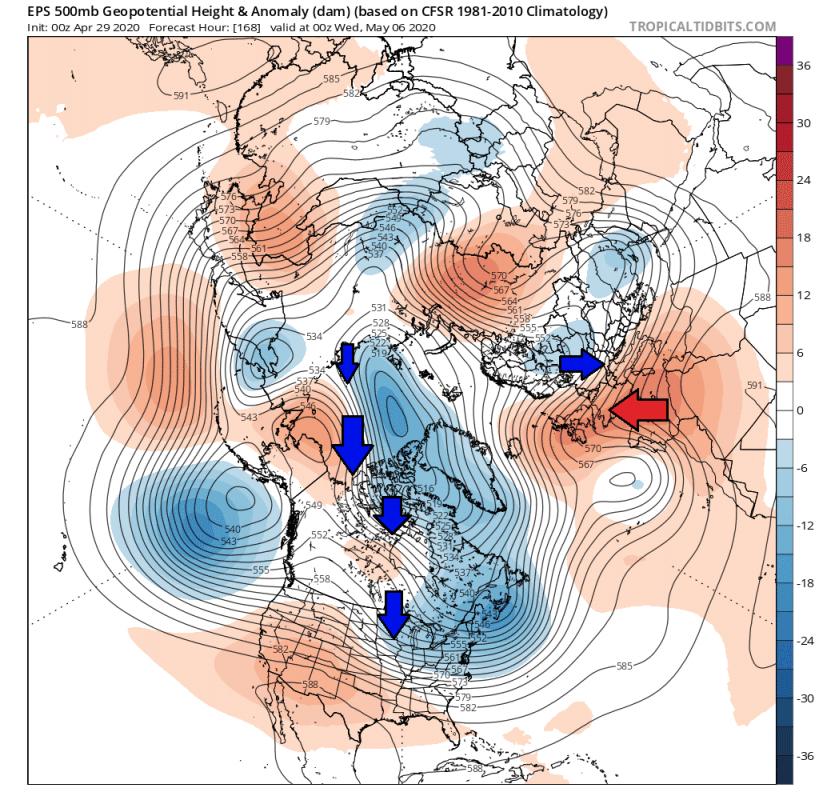 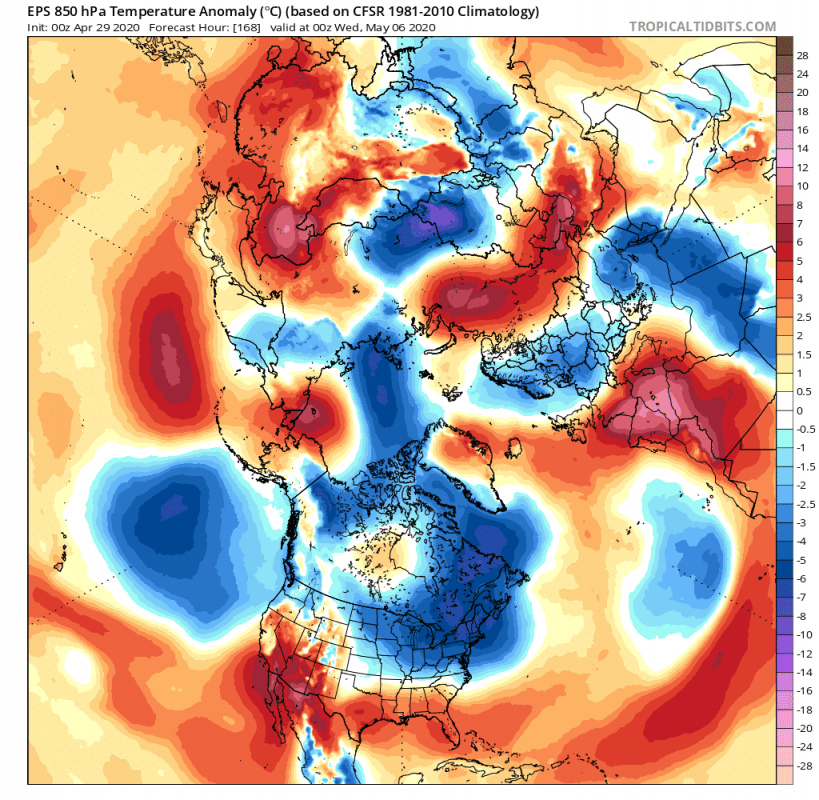 By early week 2 of May, the cross-polar flow pattern will remain steady. The cooler air will spread further south, keeping most of the North American continent in colder than normal conditions. Over the west, a strong ridge will build, supporting the pattern, and transporting warmer spring air over the western United States.
The low-pressure systems over eastern North America will assist in building a ridge in the North Atlantic. That means the earlier ridge over western Europe will slowly move east and weaken, but will still keep the warmer than normal airmass in the Mediterranean region. In contrast to cooler air over northern Europe, the warm southern European regions will act as a source of fuel for thunderstorms across southern and central Europe, with severe events looking likely if there will be enough upper-level wind support. 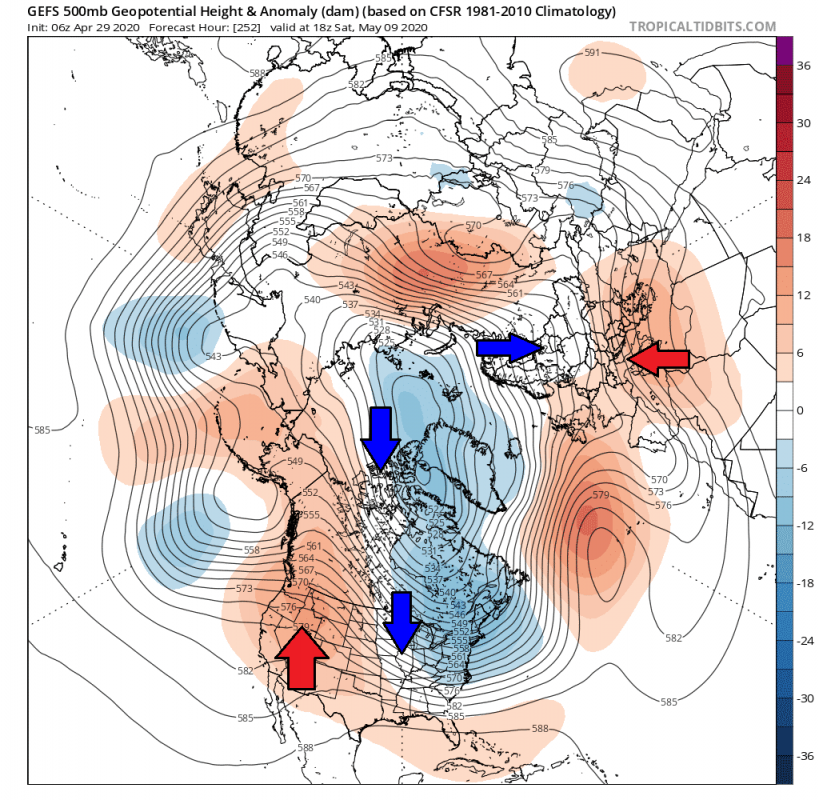 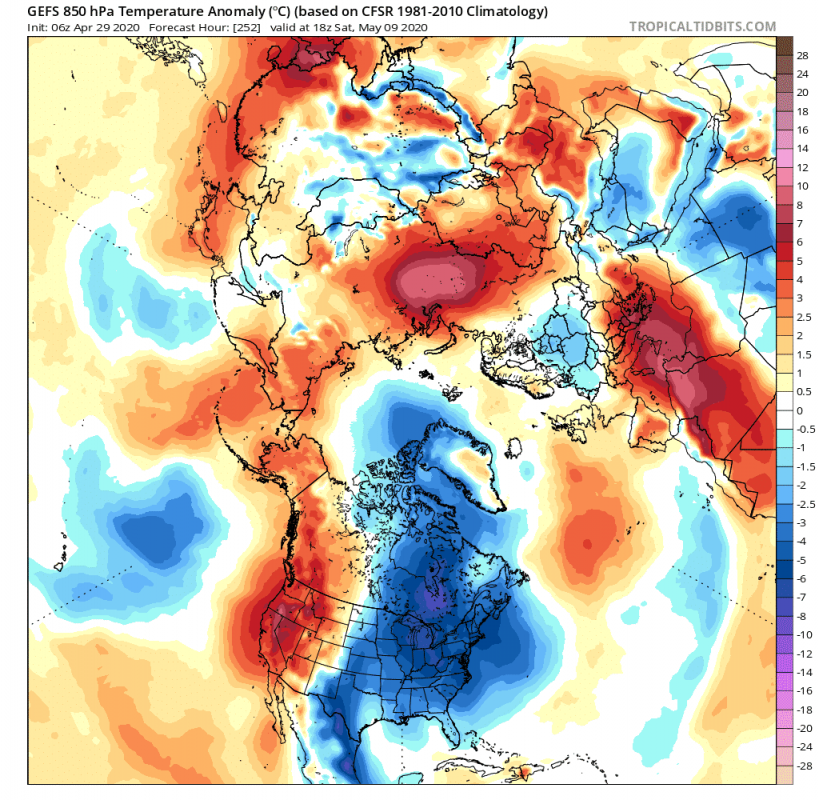 The high-resolution ECMWF model forecast shows the surface temperatures well below normal in the Midwest region and in southern Canada at the beginning of week 2. At the same time, we can see well above average temperatures over the western United States, as the ridge there strengthens. 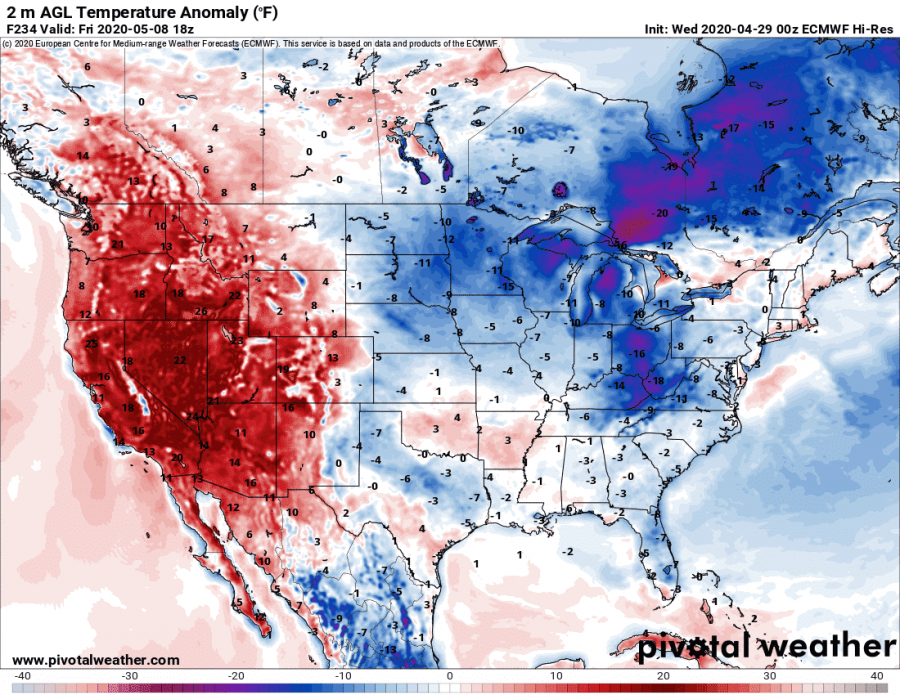 Around mid-May, the pattern will still persist, but the warm air from the western United States will move further east, as the high-pressure system expands. Colder air will slowly return back into Eastern Canada.
The ridge in the North Atlantic will assist in creating a more northerly flow across northern and western Europe, bringing more unsettled weather to UK, Ireland, and also into the Iberian peninsula, in the form of cold fronts from the northeast. Southern Europe remains above average warm, creating a temperature contrast from north to south, with a potential stormy area in between over central Europe. 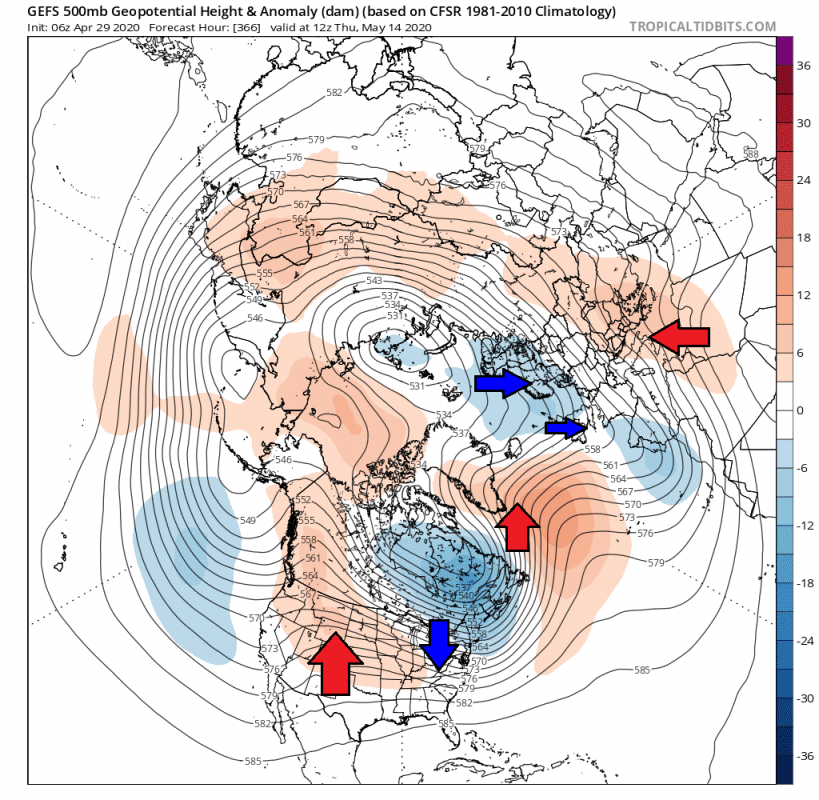 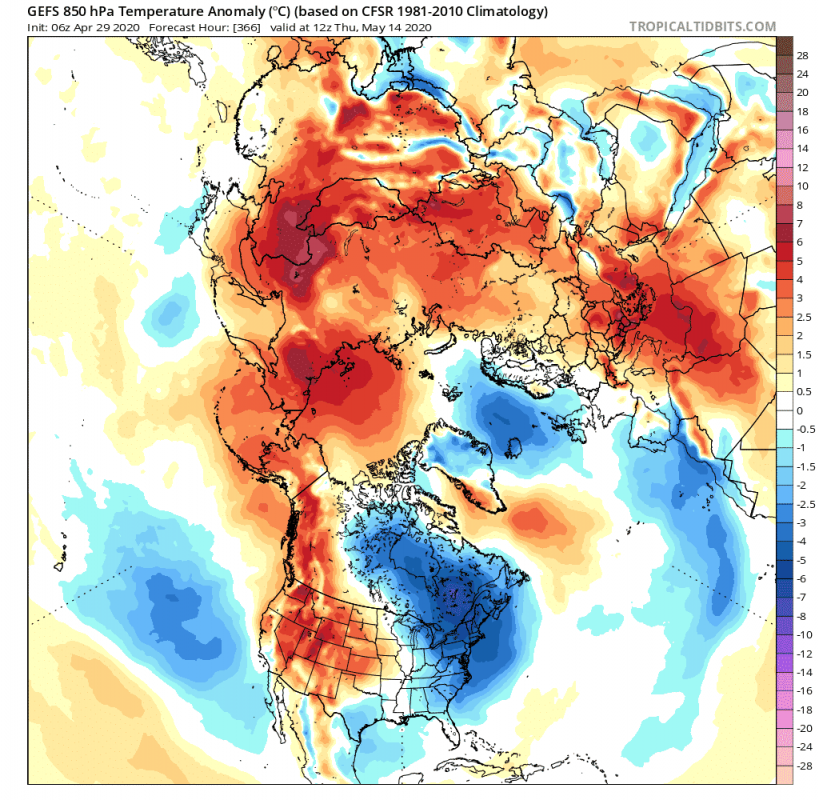 We will keep you updated on further development of the May forecast pattern. In the mean time, see also: Florida heat: April brings record-breaking temperatures