After a long period of below-normal temperatures recently, Europe is now ahead of a very significant warmth arriving with a large North Atlantic mid-latitude cyclone. Much warmer weather will spread across the European continent in the coming days. Farther north, the already disturbed Polar Vortex aloft swings its southern lobe towards Northern Europe and Russia, causing a potentially strong Arctic outbreak towards the next weekend.

Through the mid-October, a powerful cold blast has spread across a large part of continental Europe, delivering very cold days, first autumn frosts for some regions, and a lot of snow in Scandinavia. This is now about to change with a huge flip in the weather pattern! 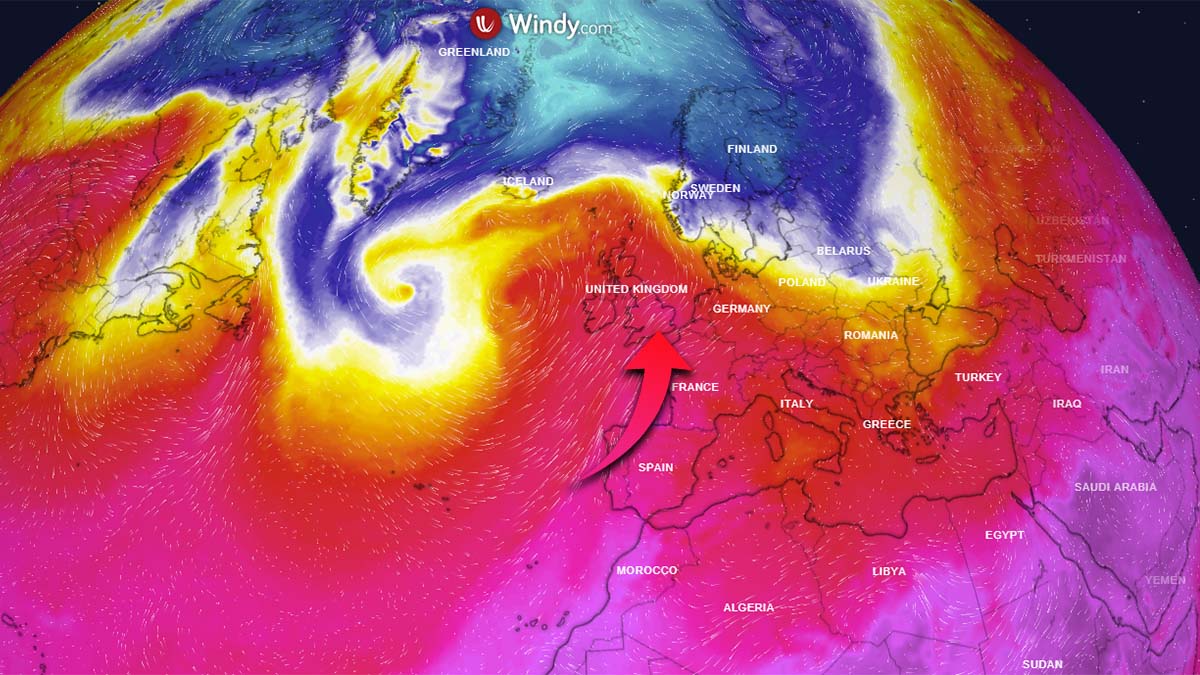 A much warmer air mass will first spread into western and southwestern Europe by Monday, then gradually expanding towards the east and northeast through the mid-week days. Compared to what we have been experiencing recently, temperatures will be 10-15 °C warmer.

We have prepared the video animation of the pattern evolution and a sharp flip, going from the blocking High over the North Atlantic and western Europe into the large mid-latitude cyclone and a much warmer air mass spreading into Europe from the west this week ahead. Towards the weekend, the potentially major Arctic cold outbreak is hinted at by the weather models.

Let’s now discuss the general weather pattern evolution over the North Atlantic and Europe through the following days, causing a dramatic flip in the dynamics and temperatures.

The large upper-level ridge that was resulting in pretty much stable weather across western and southwestern Europe recently, has collapsed. Farther west over the North Atlantic, a large mid-latitude cyclone has developed this weekend and will be the key feature and trigger for a significant change over Europe.

The satellite image is indicating that the North Atlantic depression is in the fully matured stage, dominating a large part of the region. The core of the low has an impressive comma cloud pattern, surrounded by the dry conveyor belt. The central pressure has dropped into the upper 970s. 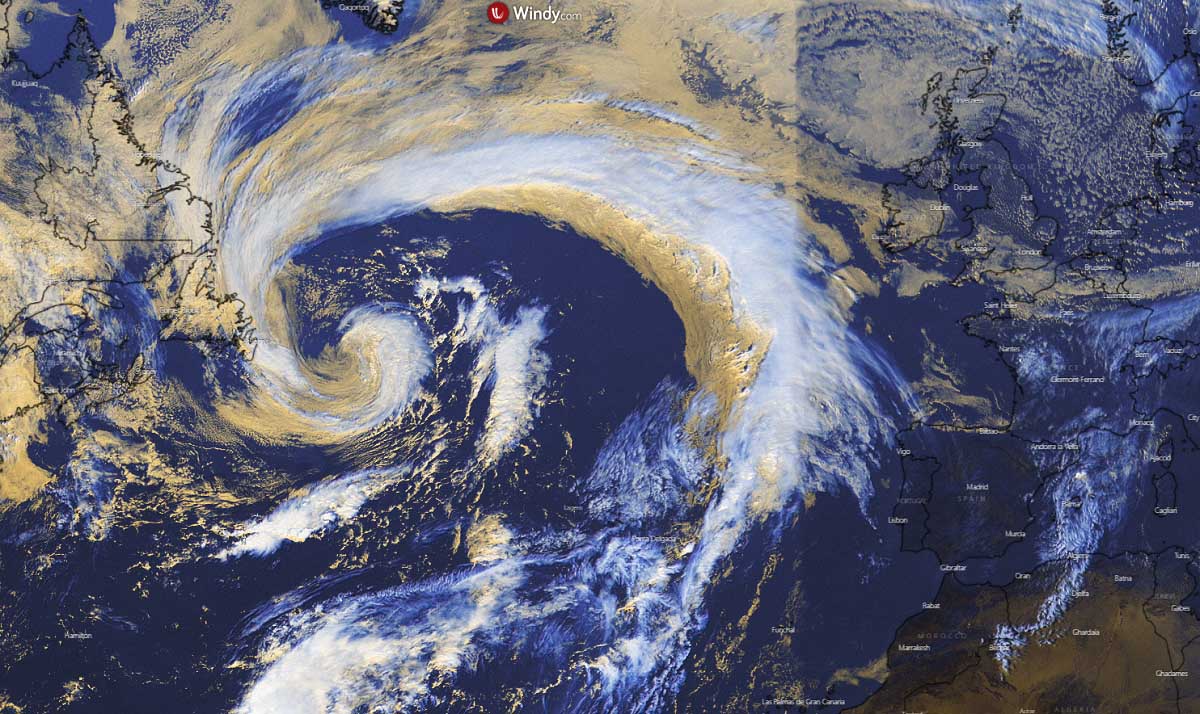 With this cyclonic system being so large, the wind field is broad and pretty strong. It causes a strong warm advection from the south towards the north-northeast already on Sunday, gradually strengthening and expanding into western and southwestern Europe.

To the east of the changing pattern, the persistent strong and deep cold pool that was causing wintery weather recently is finally washing out and vanishing. Notice also a huge negative temperature anomaly over Greenland and far North Atlantic, responding to the strong cold advection on the northern side of the large depression. 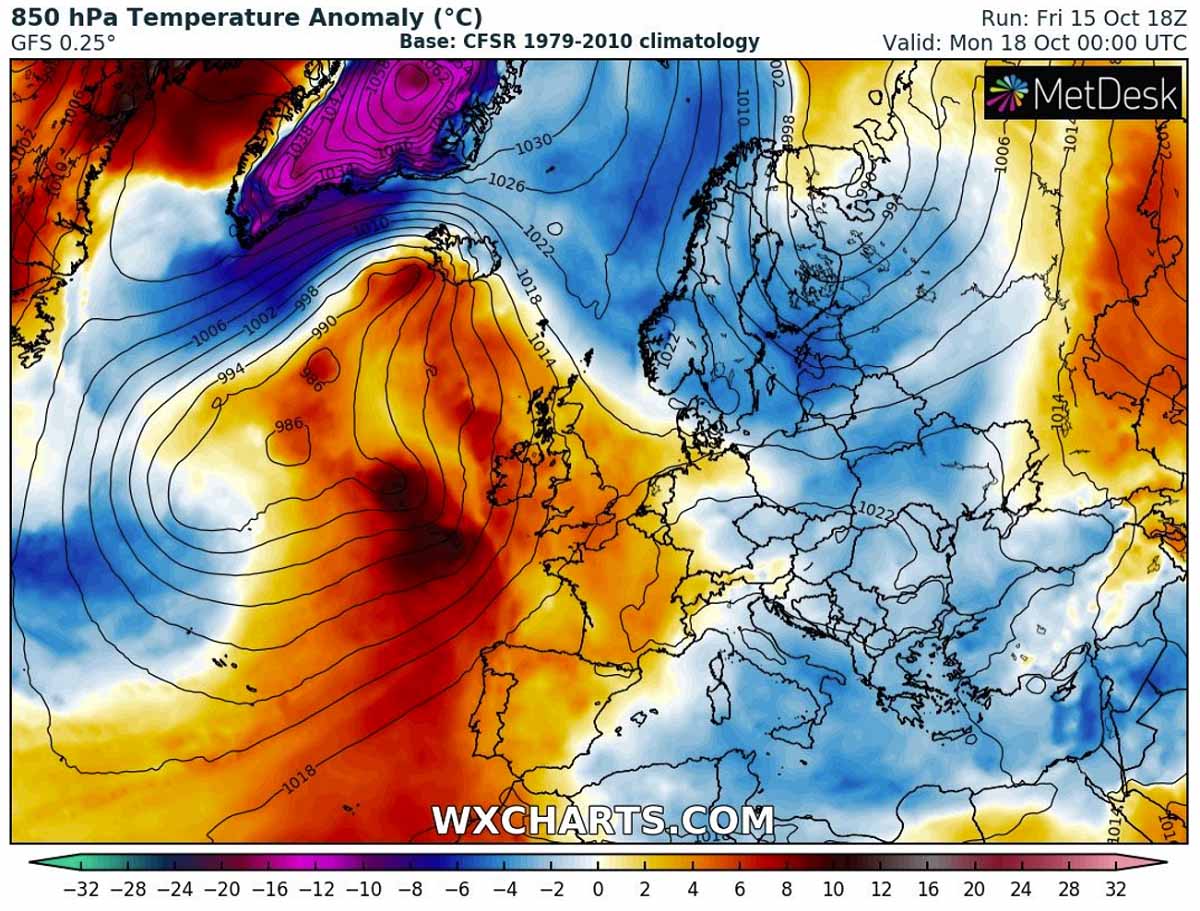 The first result of the approaching North Atlantic cyclone will be the re-strengthening of the Azores’ high-pressure system, gradually expanding into southwestern and western Europe from Sunday into Monday.

This will cause a strengthening of the wind field between these two large-scale features towards western Europe. 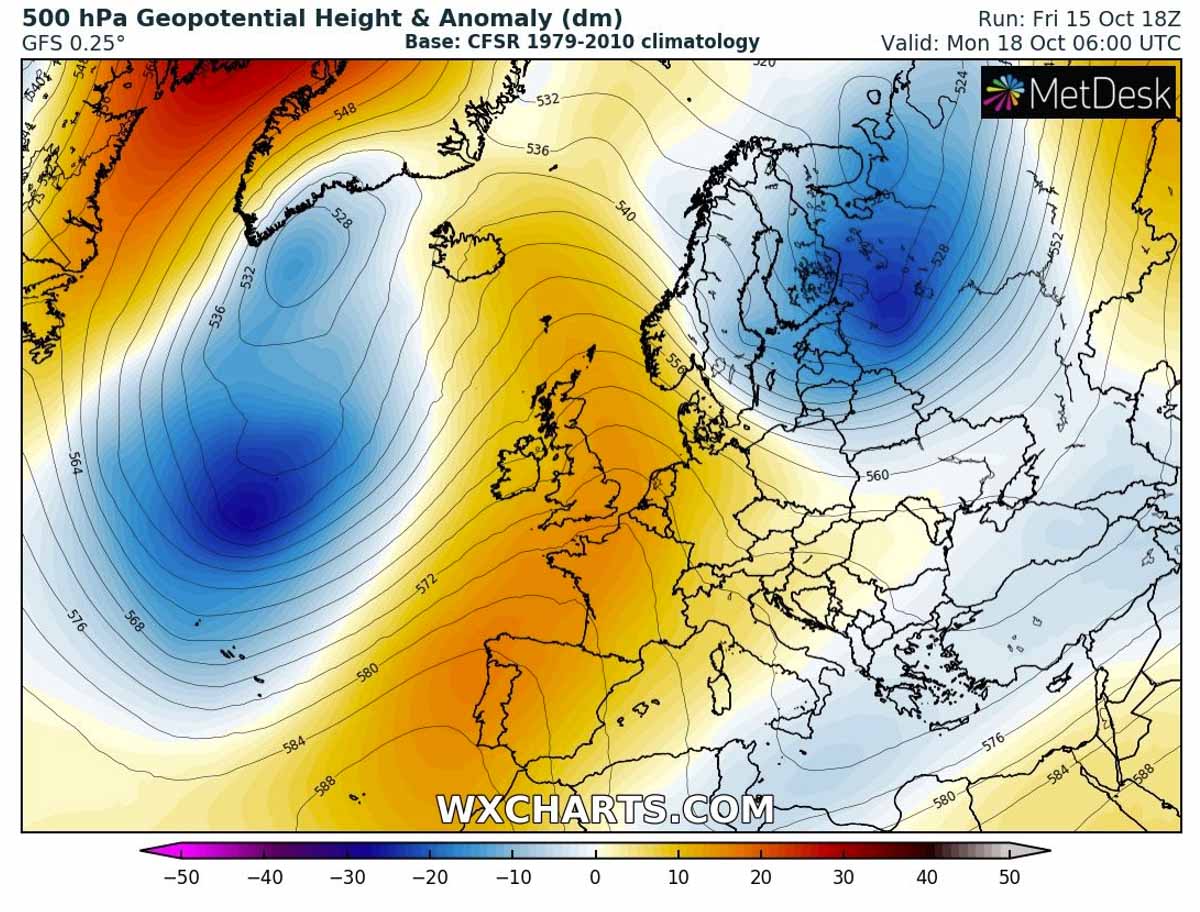 Several frontal systems will push towards western Europe and across the North Atlantic from Sunday to Tuesday, being the most intense around Iceland. Especially on Sunday, a significant winter storm is forecast for the island, with locally a lot of snow, severe winds, and blizzard conditions.

Western Europe, precisely Ireland, and the UK should see unsettled weather conditions as well, but fronts will not be particularly strong. However, winds could be strong to severe in places. The wind swath chart below hints at the strong wind field rounding the large North Atlantic cyclone. 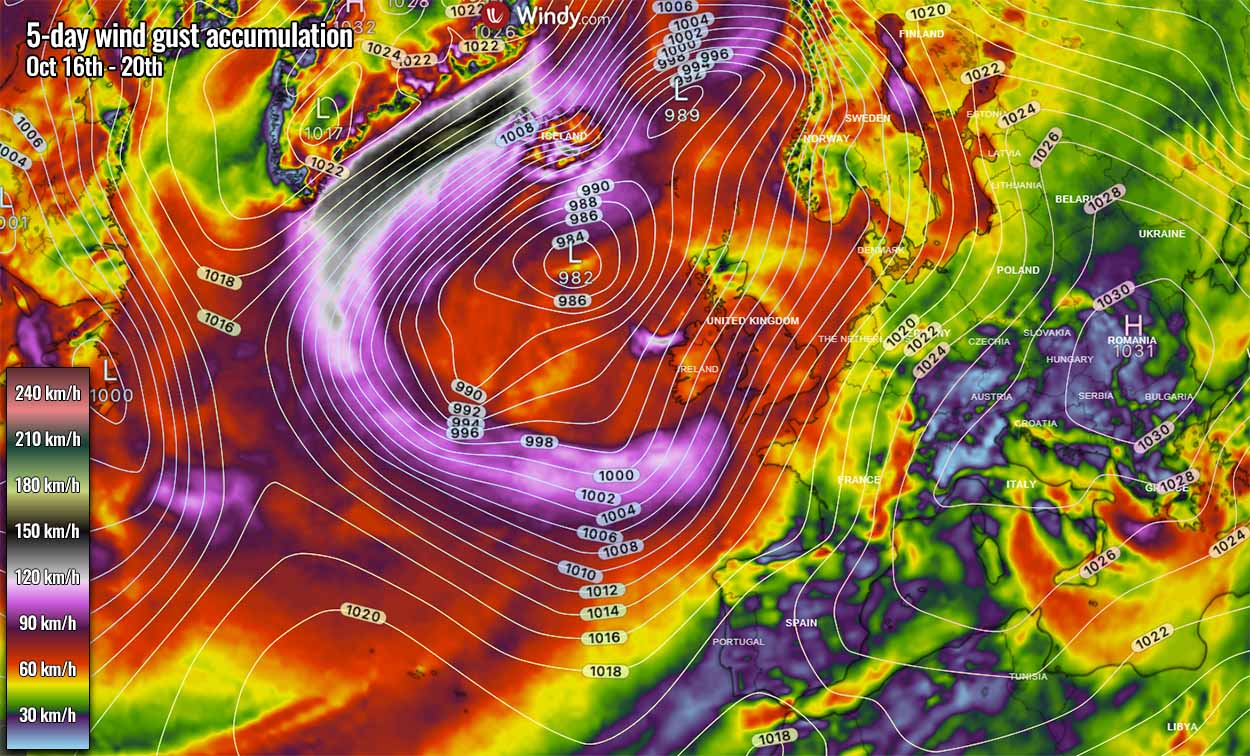 The strongest pressure gradient will be situated along the northern fridge of the low, causing a channel of powerful winds across the Denmark Strait between Iceland and Greenland. Possibly resulting in hurricane-force wind gusts.

SIGNIFICANT WARMTH DEVELOPS AHEAD OF THE NORTH ATLANTIC CYCLONE

Under the temporarily building upper High into western, southwestern, and central Europe through the early days this new week, the stronger pressure gradient between the deep North Atlantic cyclone and the high-pressure further east brings the much warmer airmass back. 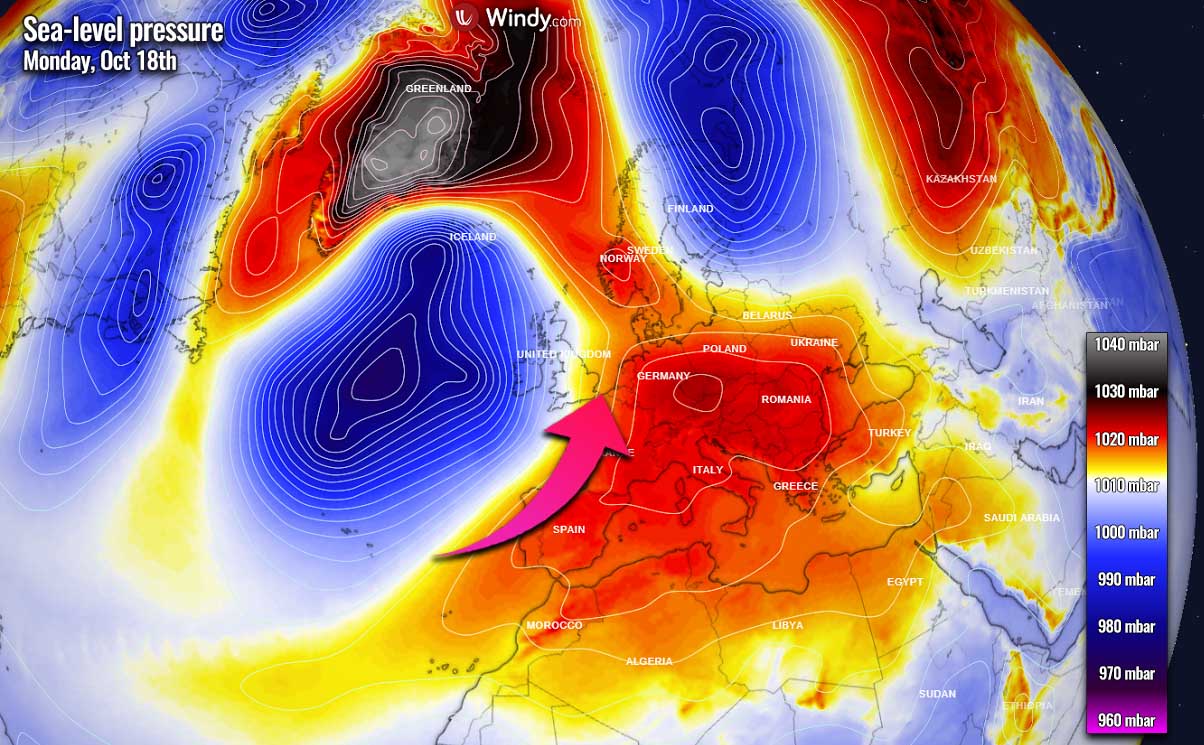 The strongly anomalous temperature on Monday will first overspread western Europe, with nearly 8-10 °C warmer than normal temperatures for this period. The center of the large low turns towards Iceland, a nose of strongly warmer air mass also spreads across the Faroe Islands and curving towards Iceland.

The progress of the warmer air mass towards central Europe will actually be quite fast, already reaching the region by Monday night into early Tuesday. Further northeast over the Baltic region and Scandinavia, colder than normal temperatures remain. But those are about to change as well. 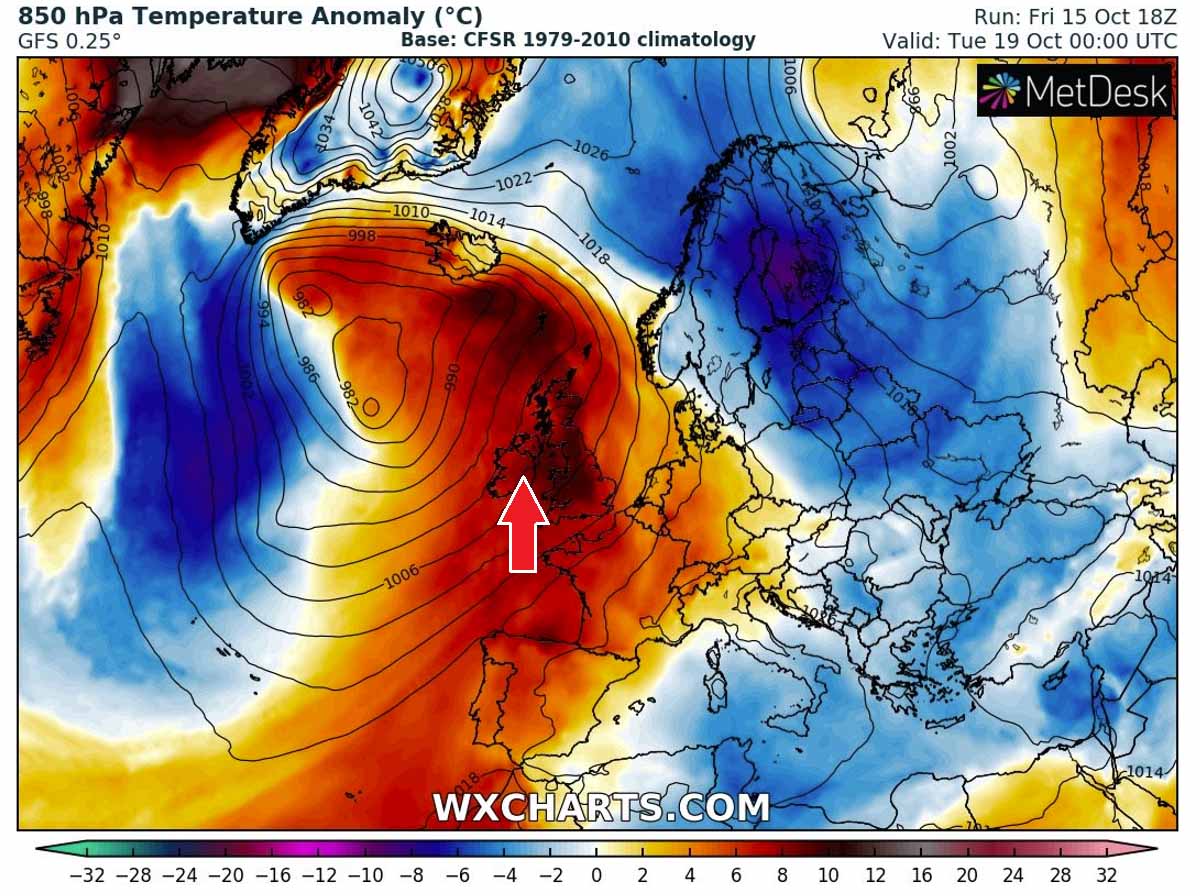 On Tuesday, the North Atlantic depression will move towards western Europe, helping the warm advection to maximize across the central parts of the European continent. A nearly 10 °C warmer air mass will spread the areas from southern Scandinavia across Germany to the northern Mediterranean.

There will be a huge temperature and pressure difference between the Low over North Atlantic and High over continental Europe, supporting strong southwesterly winds aloft. So the warm air mass will have no barriers to limit its further eastward progress. 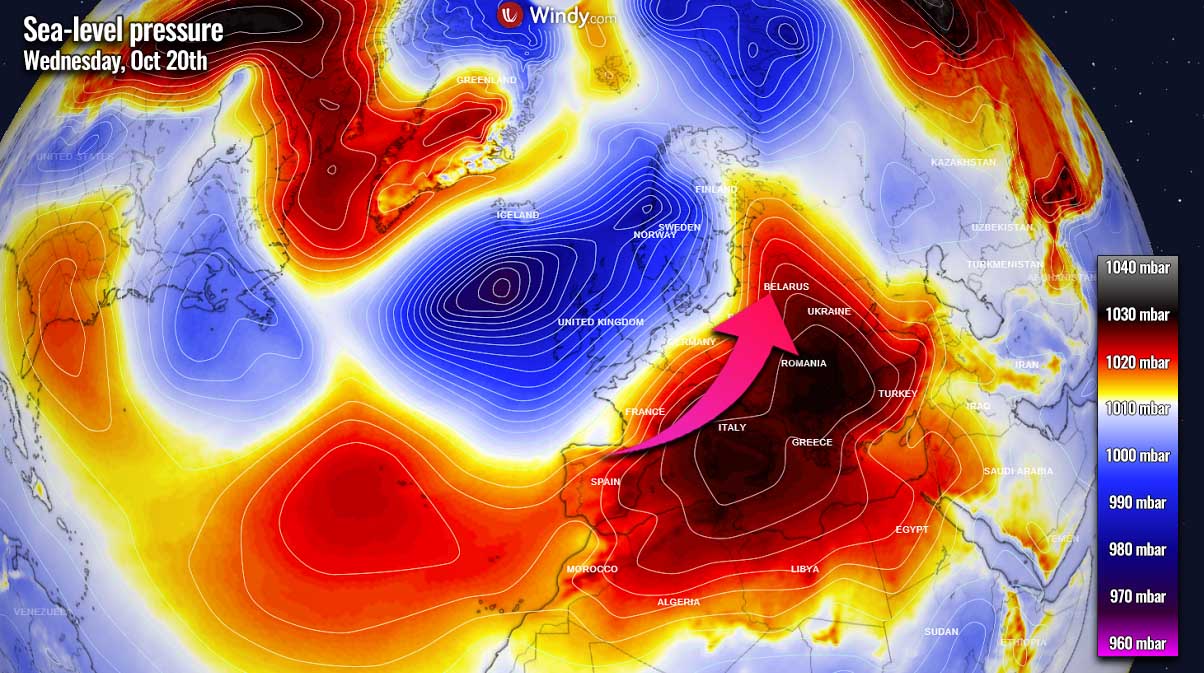 Stable and warm Tuesday and Wednesday are expected under the large High in central Europe and the Balkans, pushing the daytime temperature even into the low 20s in some areas.

Tuesday will be *extremely warm* October day in France, with probably 24-26 °C across a large part of the country. with temperatures closing in the upper 20s in the far southwesterly parts. Even a hot day is not excluded there due to the downslope Foehn flow from the Pyrenees into the valleys to their north. 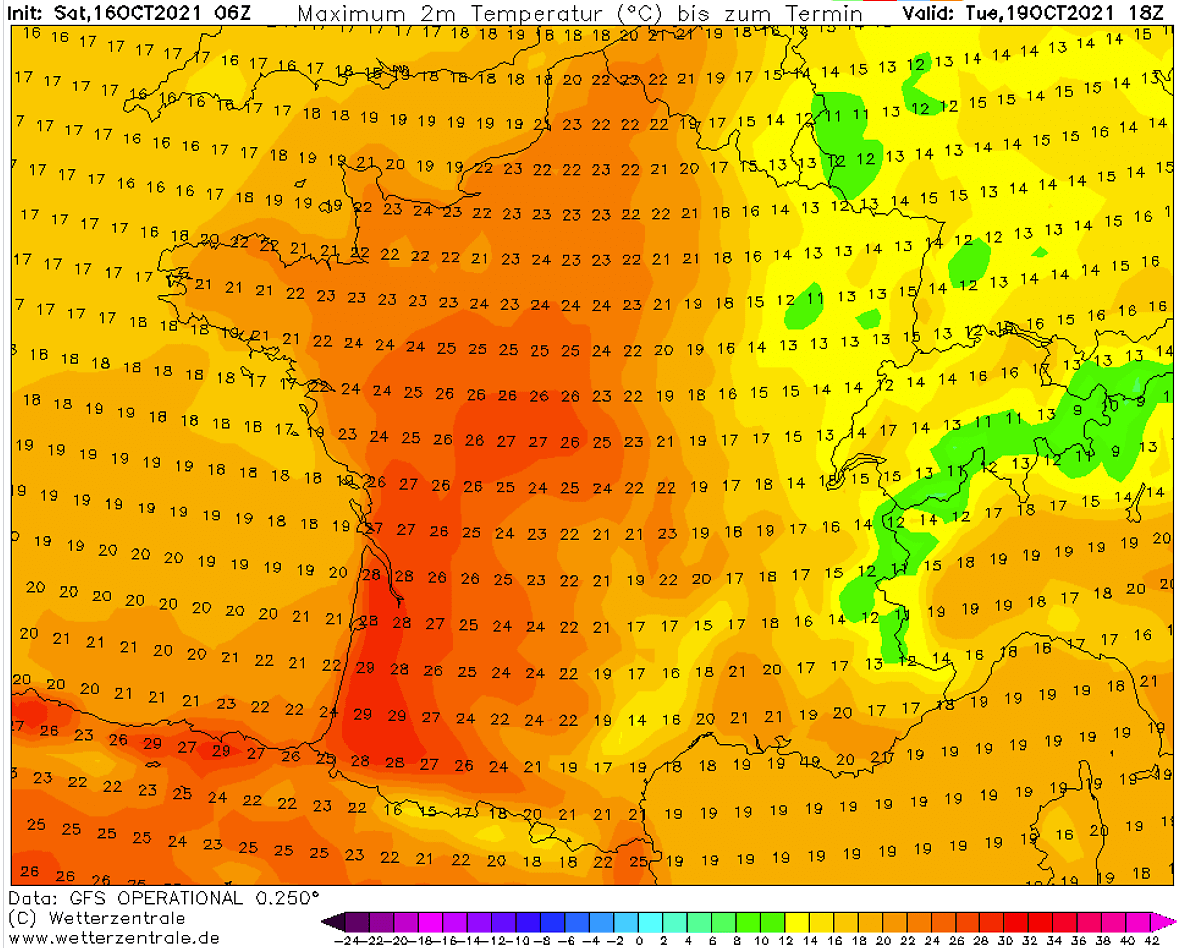 At the same time, the further progress of the low begins changing the cold with the warmth over central Scandinavia, while the cold remains over most of Finland, west-northwest Russia and Lapland. Windy and unsettled conditions are forecast with the frontal system to the south of the center low.

Notice also a trapped cold pool over far southeast Europe. It will, however, flush away with the further eastward progress of the deep low over Europe as Wednesday approaches.

When the large North Atlantic depression digs further east-northeast towards the mid-week, its front end releases secondary deep cyclogenesis over Scandinavia, in response to a strong interaction of much warmer air masses from the southwest and those much colder to the north.

A powerful winter storm will develop into Scandinavia, with a wintry mix near the northeastward racing warm front but heavy snow to the east and north ahead of it. How intense and where exactly the boundary will sit is hard to define as it depends on how intense the surface low will become. 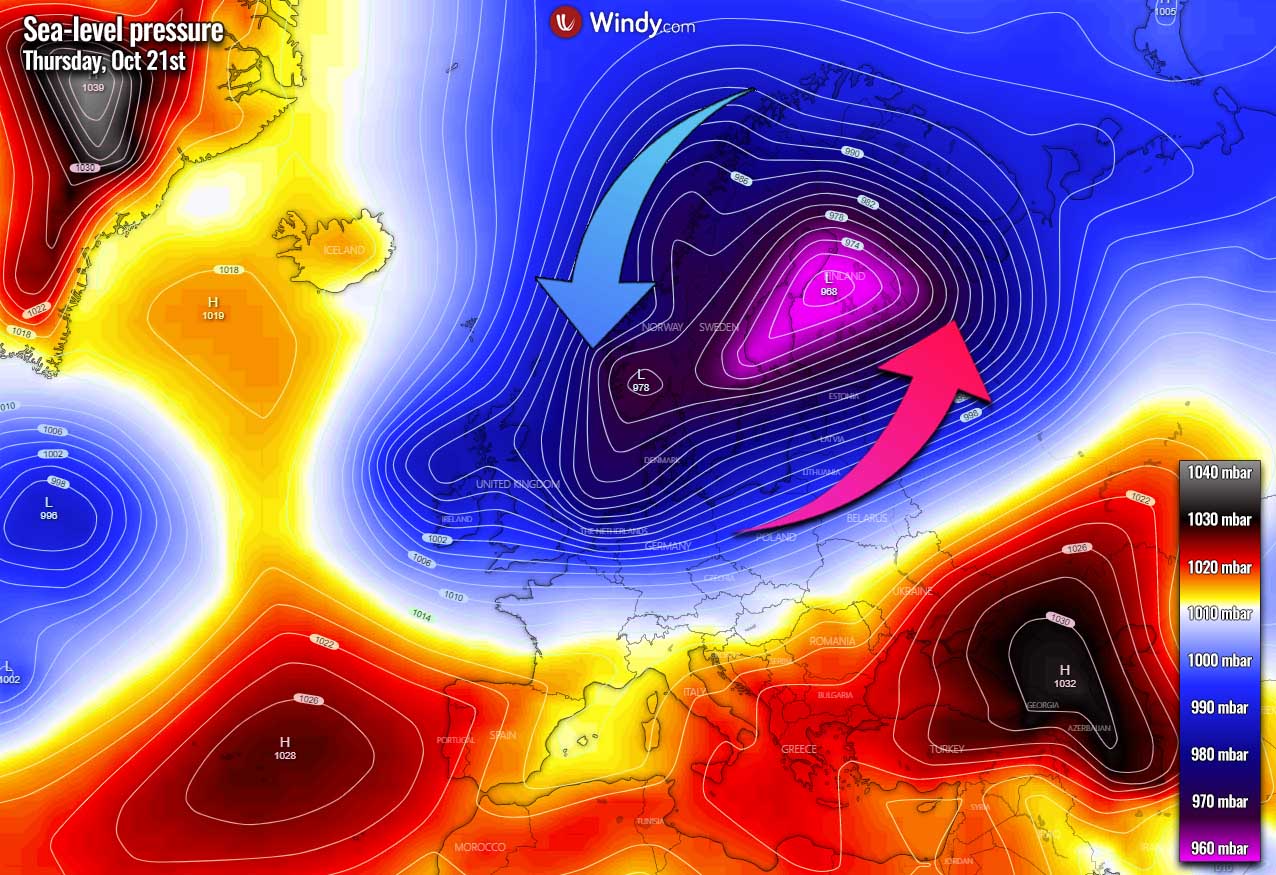 But the secondary cyclone will be pretty deep, probably with its central pressure below 970 mbar while it crosses central Scandinavia on Thursday. It will help the much warmer air mass to its south to continue further east towards eastern Europe but will also bring down the cold air mass in its wake.

Attached below is the precipitation forecast chart for Wednesday afternoon during the rapid strengthening process of the cyclone, moving over southern Sweden and Norway towards Finland. Heavy rain is likely there, but an intense winter storm is forecast to the north of the center. 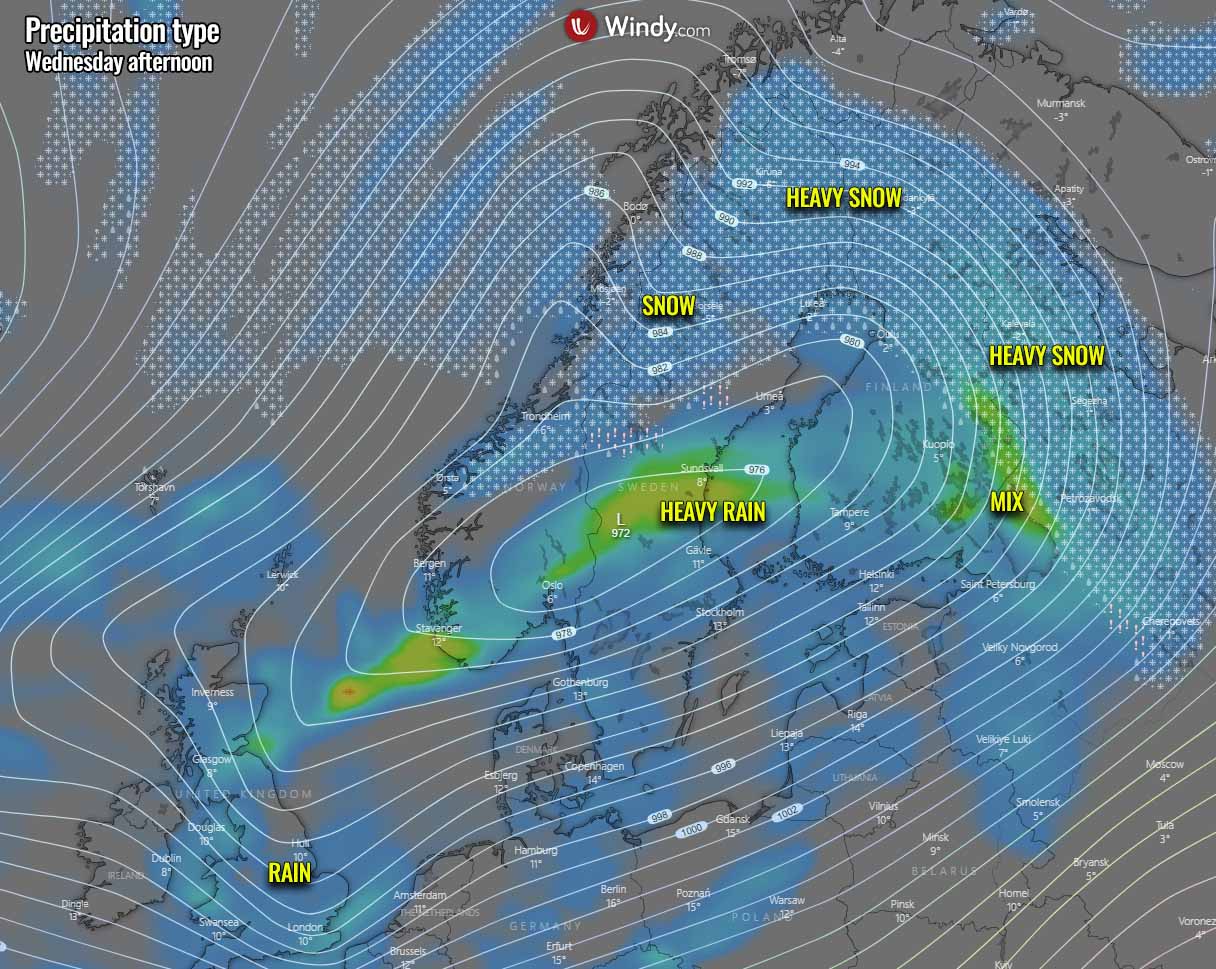 A combination of heavy wintry precipitation, including heavy snow with the strong winds, should also bring blizzard conditions especially across Lapland and central Finland through Wednesday into the night.

It has to be noted that, as the cold is placed over Scandinavia this weekend, the arrival of much warmer air mass aloft could also develop dangerous conditions for freezing rain and sleet in some areas!

The position of the low indeed plays a huge role here in how the air masses will clash together, resulting in heavy winter precipitation in some places while others remain under the warmth and heavy rain to the south. The strong warm advection to the south of the low will overspread eastern Europe and bring particularly warm Wednesday for the Baltic region. 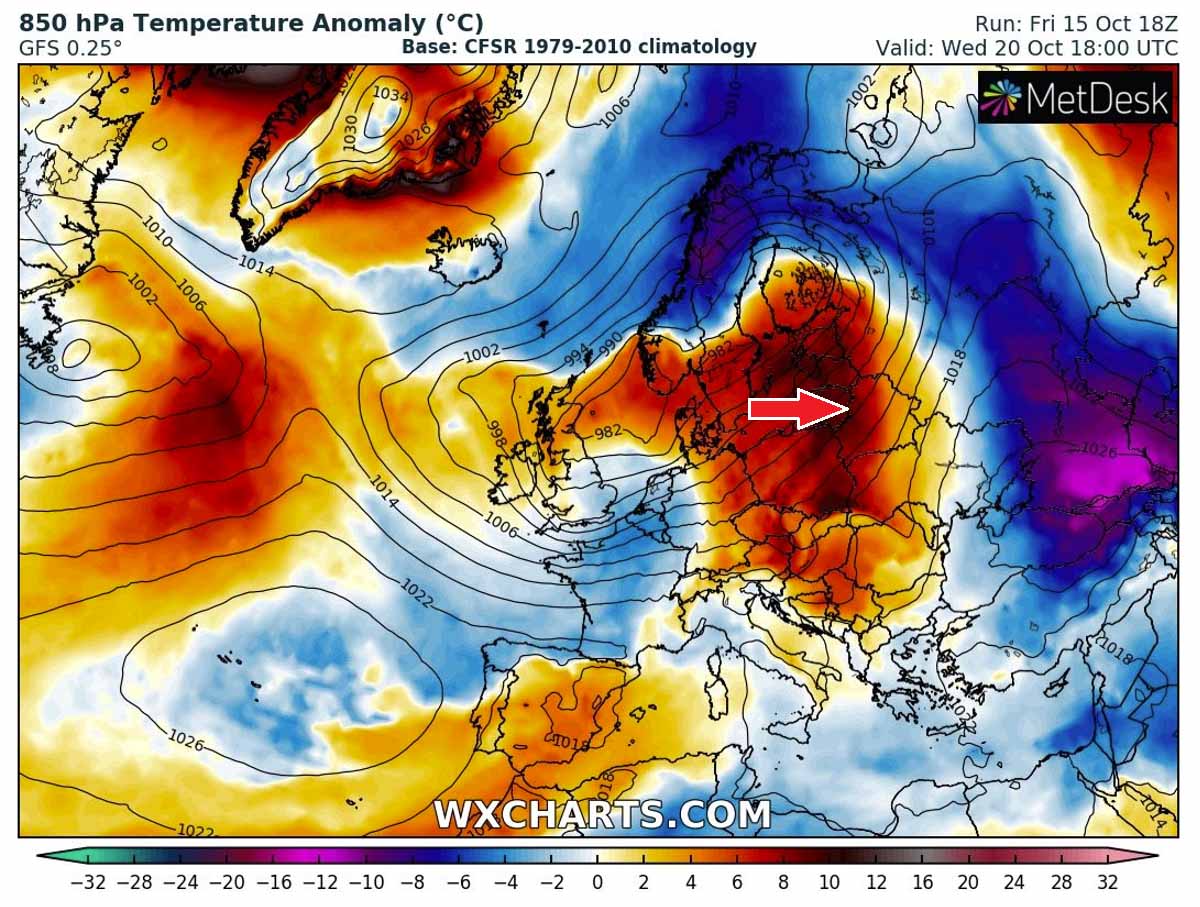 So the northern Scandinavia, especially northern Norway, Sweden, and Finland are likely to receive more snow this coming week. Depending on the position of the surface low, snow amounts could vary a lot as the boundary between warmer and colder air mass will be relatively sharp.

The highest amounts of fresh snow are forecast to the immediate north-northeast of the traveling low, likely across northeast Sweden into the Lapland region of northern Finland. There, more than 50 cm of new snow could accumulate over the next 5 days. Quite some snow, locally 50cm+ is also likely across the northern half of Iceland. 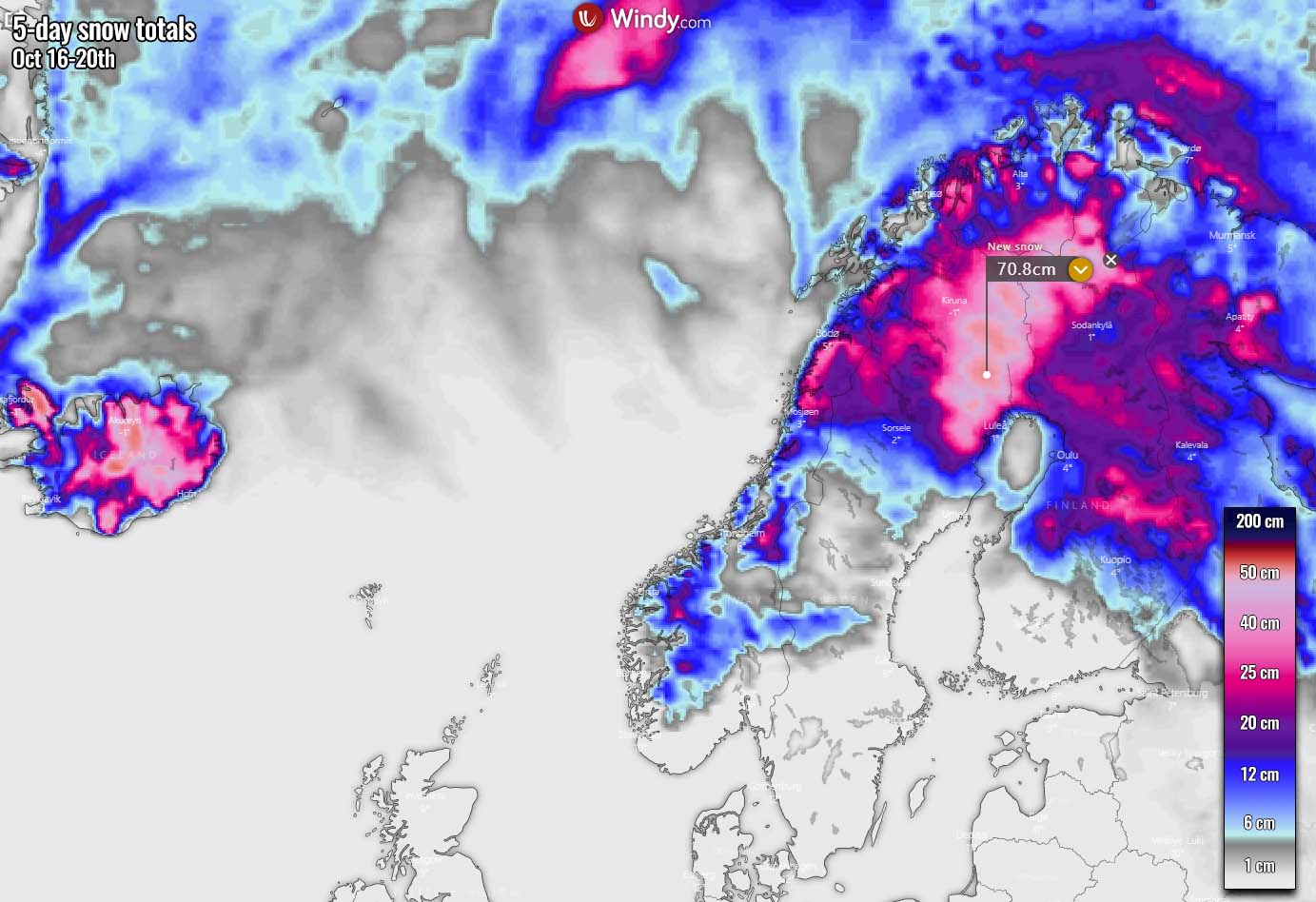 This push of significantly warmer air mass arrival from the west will also flush away the cold from western Russia, but the intense cyclone to the north starts something that might be a change in pattern for the rest of Europe soon as well.

A much colder Arctic air mass will begin accumulating over northern Scandinavia, and it might not wait much longer there until it spreads further south.

As we discussed just recently, the Polar Vortex has already returned for the winter season 2021/2022, with observed the first stratospheric warming event (SSW) and additional warming forecast into late October. 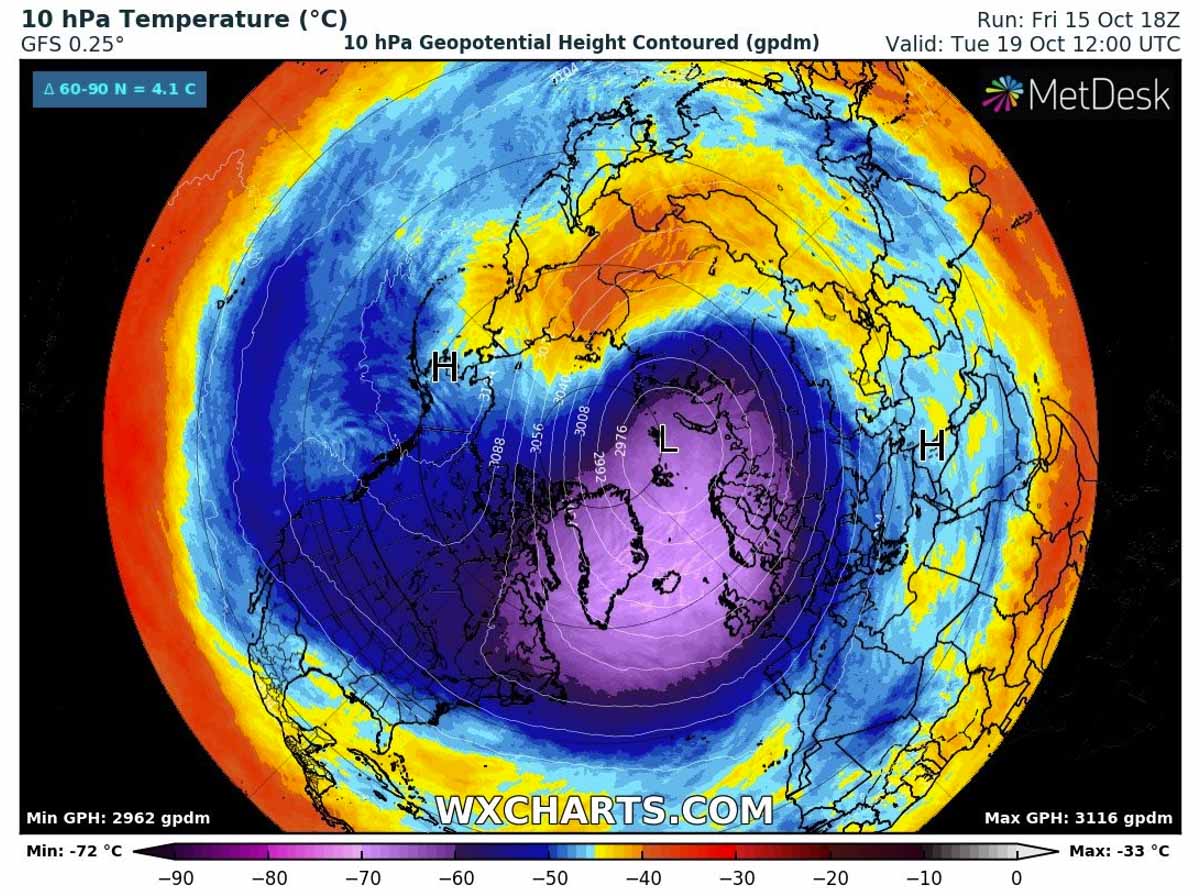 As we can see from the chart above, the extremely cold temperatures aloft are gradually expanding into the far North Atlantic, northern Europe, and northern Russia. Notice the stratospheric warming very well seen above northeastern Asia.

These dynamics in the upper levels will push the southern lobe of the Polar Vortex towards Northern Europe and Russia late this week, causing potentially a very significant Arctic cold outbreak into continental Europe. Actually, a classic dipole pattern seems to form once again – a strong High over the Atlantic and deep trough/low to its east. 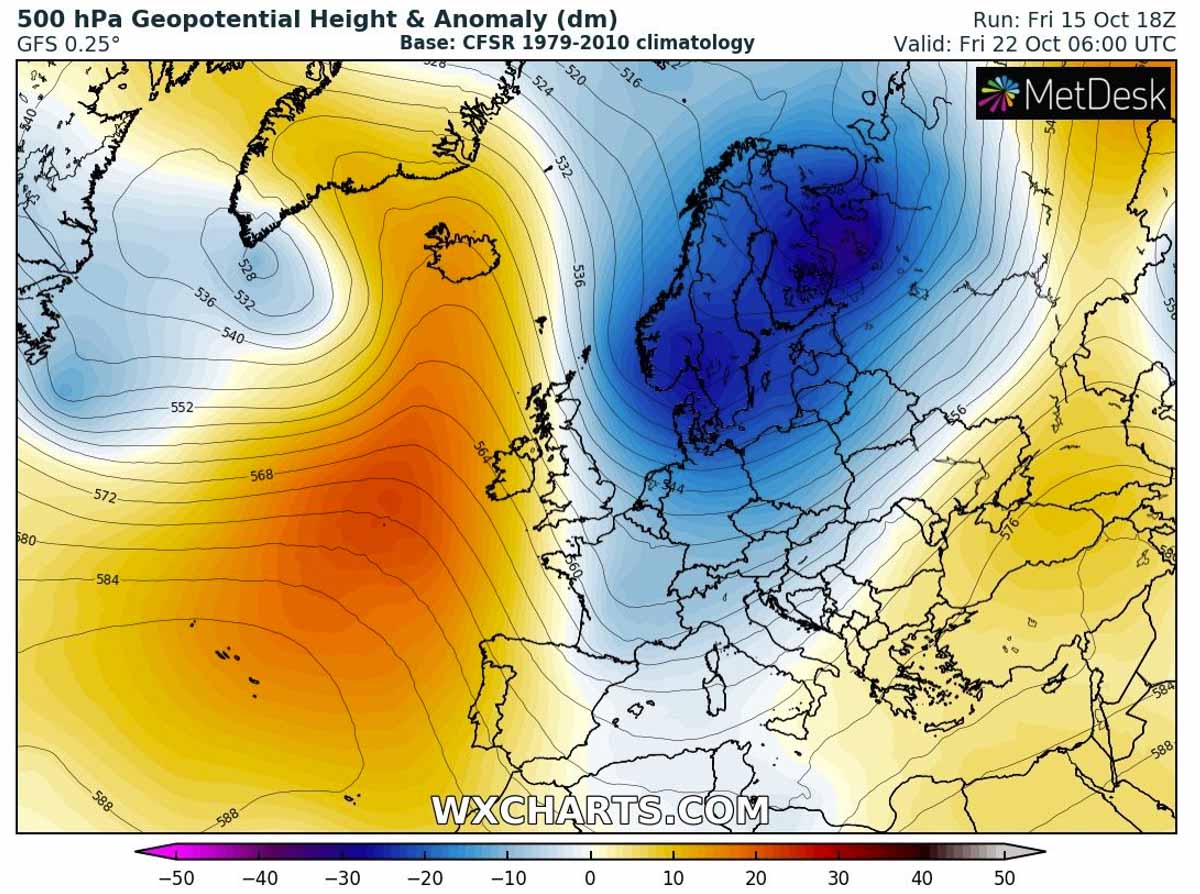 According to the recent weather model trends, the southern lobe of the stratospheric Polar Vortex aloft will quickly respond to the strengthening of the upper-levels across northern Europe and Russia. A large and deep mid-latitude cyclone will likely develop, turning the flow to meridional, from the north towards the south.

The pressure forecast for Friday reveals a potentially very intense surface cyclone centered over far northeast Europe and northwest Russia with an impressive pressure gradient, meaning winds will be in increasing as well. While the surface high-pressure system develops under the Atlantic ridge, blocking the westerly zonal flow. 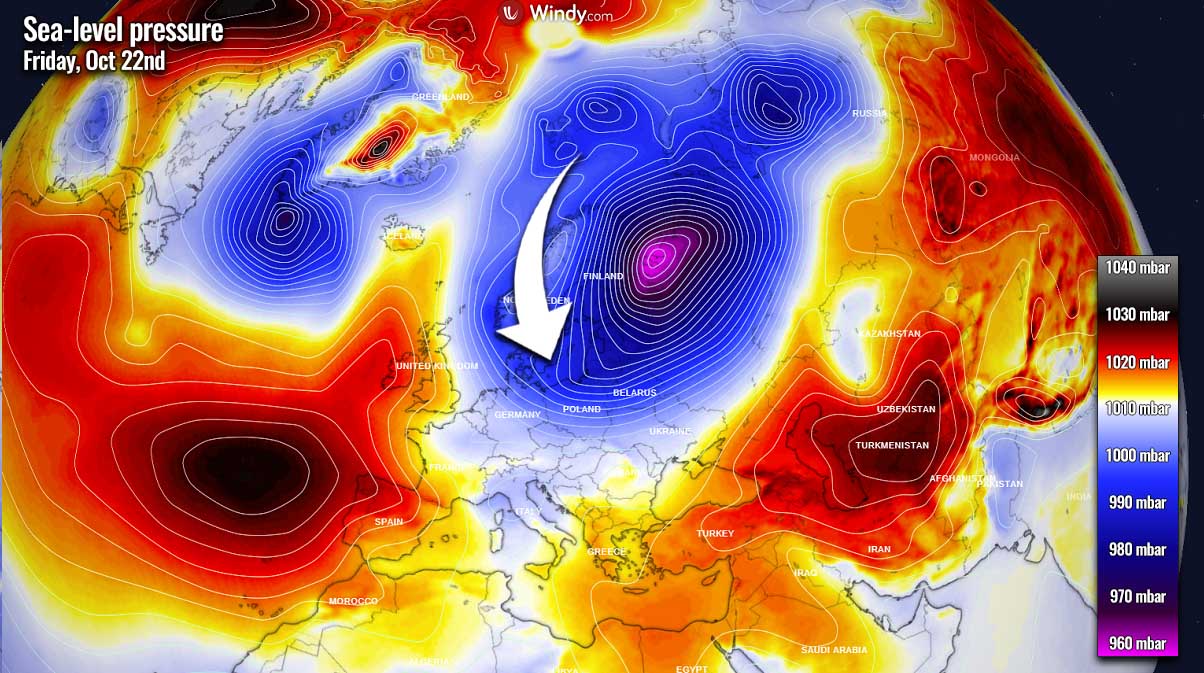 How intense and where the new deep cyclone will develop on Friday into the next weekend is still a bit uncertain due to the timeframe distance and the pattern evolution throughout the days ahead, but the potential is surely there due to the Polar Vortex lobe aloft.

The general weather model consensus between GFS and ECMWF models is actually not too far apart. Both are hinting at a potentially quite intense cold outbreak, first developing across northern Europe but also spreading south towards central parts of Europe after Friday. 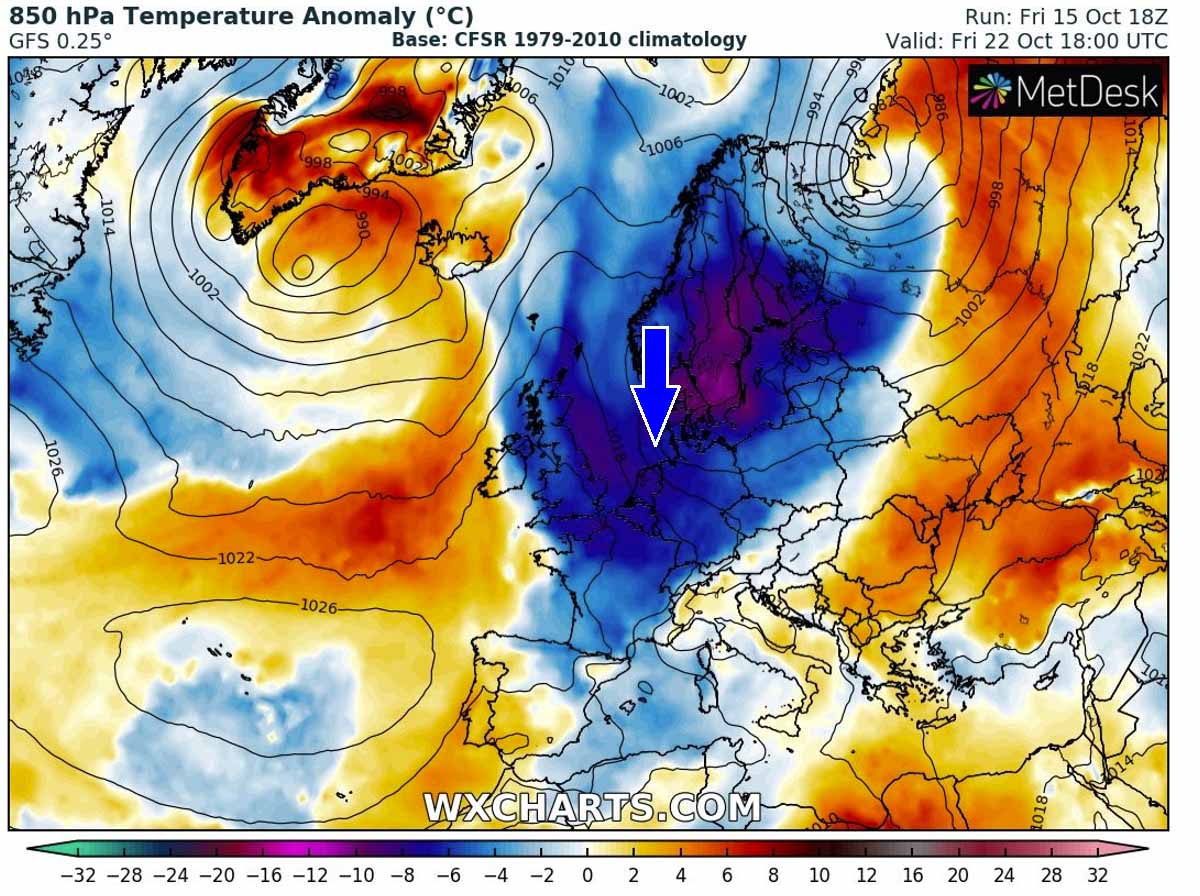 Both weather models are in agreement at least the central and eastern parts of the European continent will be overspread with this new cold blast over the weekend. If the cold pool also spreads into western parts, is unclear at the moment.

The GFS model is more aggressive than ECMWF, having also the cold intrusion farther west than the European ECMWF model.

We will keep monitoring the evolution of the pattern over Europe and further updates on this could follow, so make sure to bookmark our page and not missing those. Also, if you have seen our article in the Google App (Discover) feed or social media, feel free to click the like button (♥) to see more of our forecasts and our latest articles on weather, climate, and nature in general.

Images used in this article were provided by Windy and Wxcharts.

The Orionid Meteor Shower 2021 Peaks This Week. Here is How to See and Photograph it