Just a week after a dramatic temperature drop across much of Europe, the winter weather and related cold are again posing a significant threat to the vulnerable spring vegetation process. Additional days with morning frosts are expected after Tuesday through Friday. And similar to the last week’s event, a major snow event is likely across the Alps, part of the Balkan peninsula, and this time also across the High Tatras.

Soon after the Easter weekend, a tremendous amount of Arctic air mass spread across western and central Europe. Unfortunately, the weather model forecasts did verify and the result was a destructive freeze and frost in many countries across Europe. Despite many safety precautions in vineyards and fruit plantations against very low temperatures and frost, those were so extremely low, the damage was severe to even catastrophic for many.

The cold has then also spread over the Balkan peninsula with late-season snowfall reported in Greece and Turkey as well. Believe it or not, a large part of Europe is now once *again* ahead of a very cold period of a few days across western and central Europe. Temperatures are expected to push below freezing in the mornings ahead and cause additional frost damage. 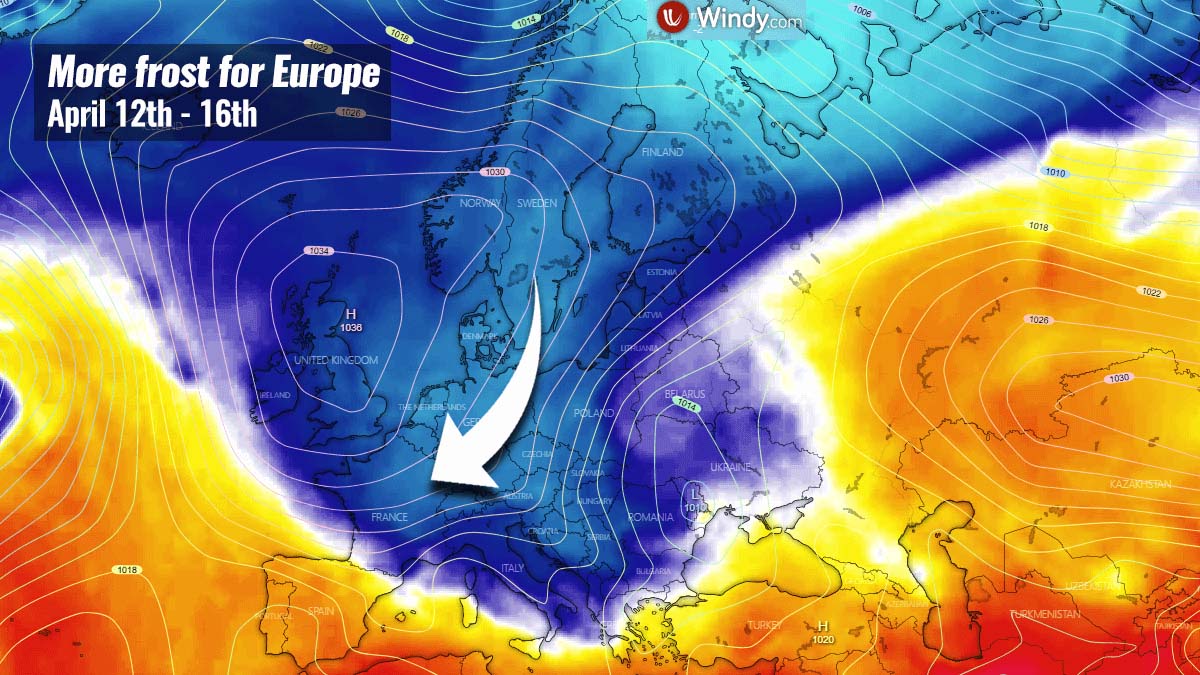 Once again, a quite dramatic cold weather pattern is emerging over Europe as another pool of unusually cold April air mass slides from the Arctic towards the south. Similar to the event last week, the colder weather is first impacting the UK, Ireland, and the rest of western Europe, gradually spreading towards central Europe and the Mediterranean behind the cold front tonight into Tuesday.

The temperature picture across Europe this Monday morning reveals that the cold front is visible extending from the Baltic region towards the Alps and Iberia, with a much colder air mass behind it as it is in front of the boundary. Temperatures across the Balkans are pushing into the low to mid-20s over Balkans this afternoon.

The cold front moving over the Alps separates the air mass to the south which is very moist, so heavy rainfall is underway. But with the arrival of the cold tonight, temperatures will push down significantly and precipitation is expected to change to snow in many areas again around the Alps and the northern Balkans.

This will result in another heavy snowfall event for the region, potentially again with quite a lot of snow locally. While the highest threat comes afterward. Like it was not enough the last week, yet another few days period with temperatures well below freezing will follow.

Attached here is a temperature animation of this new pool or cold air mass spreading across Europe over the next few days. A much colder than normal temperatures have spread across western Europe this Monday, but will become even more anomalous from Tuesday through Thursday as blocking High over western Europe helps to deliver more cold in the coming days.

Although these cold air mass intrusions in early April are quite often observed in the past years, the vegetation is not liking it at all, frost is usually destructive as early-season plants are in full growth already. Many parts of Europe have blossoming fruit trees now, so any additional cold air mass outbreaks will bring more damage to this vulnerable vegetation. We have to be aware that it becomes very sensitive with temperatures just a few degrees below freezing.

Let’s take a look over the pattern evolution this week, with the progress of yet another cold pool for April behind the sharp surface cold front and how the snowfall event evolves over central Europe and the Balkans on Tuesday first.

ANOTHER COLD OUTBREAK SPREADING ACROSS EUROPE

The overall pattern over Europe this last weekend and this Monday indicates an above-average pressure across most of the continent, but with a tendency of an additionally strengthening blocking High over western Europe and the North Atlantic. We normally can assume what this means – blocked warmer flow from the Atlantic as more meridional northerly flow is establishing. In other words, this means more cold is about to develop. 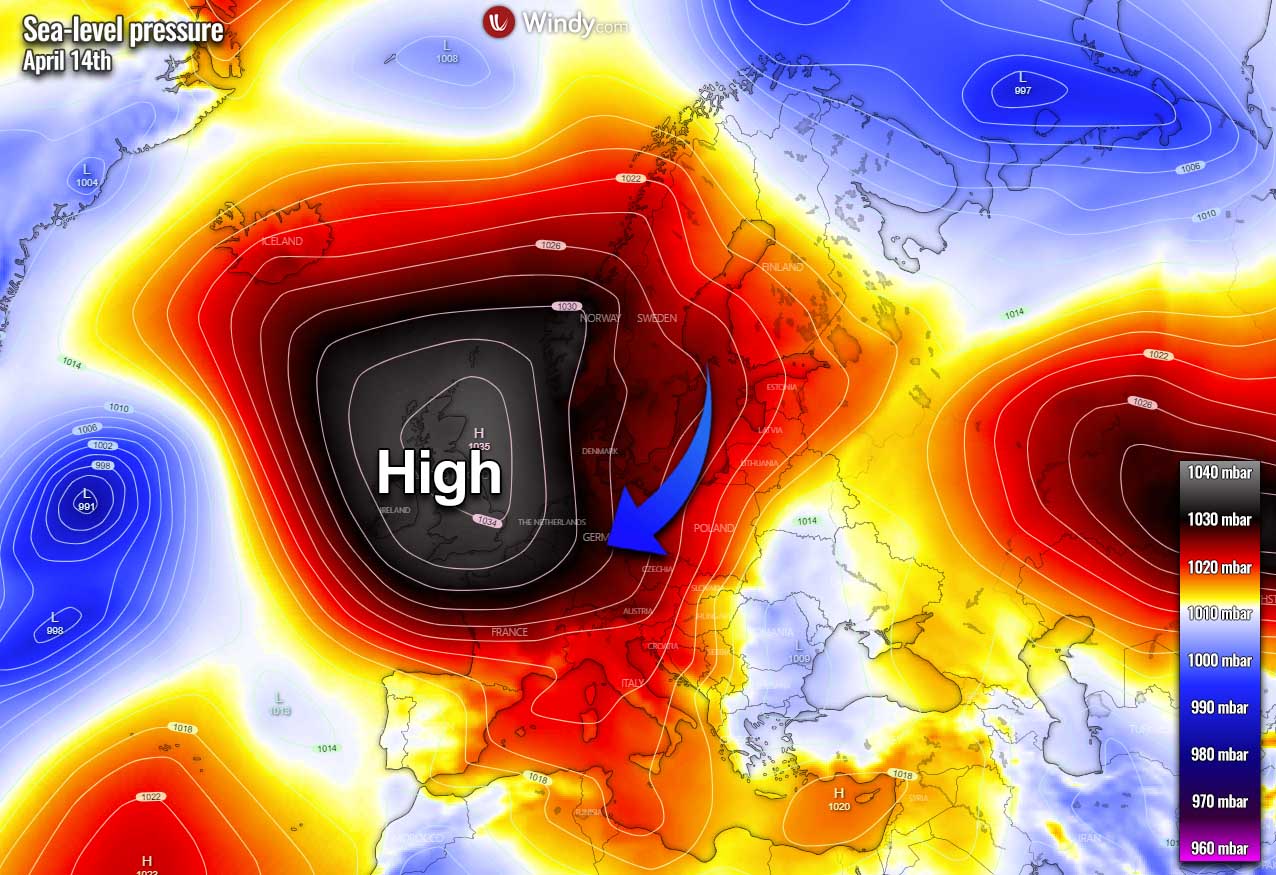 In response to the strengthening high-pressure system, a much colder air mass in the wake of the surface cold front over central Europe will be spreading further south towards the Alps. The cold pool will become quite large, delivering quite colder than normal temperatures for France, Germany, the Alpine region, and most of the Balkan peninsula.

And as the high-pressure system does not move much and just gradually drift towards northern Europe into the second half of this week, the pool of cold temperatures will maintain for a few days. This will allow nighttime and morning temperatures to slip into freezing again and cause a repeated threat for additional frost – see further details below. 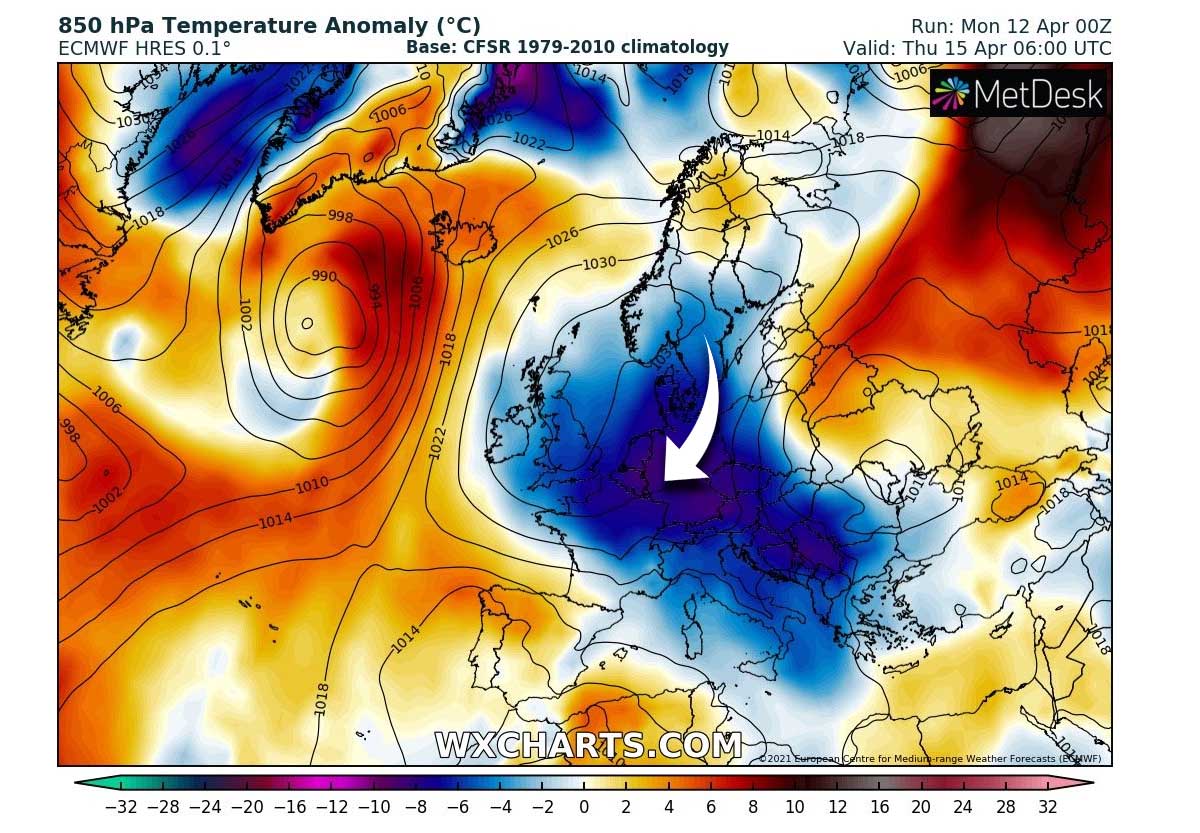 The cold will, however, begin weakening on Friday and finally vanish over the weekend with temperatures coming back to normal values for mid-April.

Heavy snowfall is already underway over the Alps this Monday, while the rain will turn into heavy snow also across the Balkan peninsula on Tuesday. Locally a lot of snow will be possible. As it typically happens with such trajectory of the Lee surface low south of the Alps, strong downslope Bora winds towards the Adriatic Sea will also develop with the arriving cold and snow.

Therefore localized near-blizzard conditions are expected, although the snow will be wetter this time as it was last week, thanks to a bit higher temperatures during the precipitation event. Nevertheless, snowdrifts will locally develop as well over the northern and western Balkan countries, e.g. higher terrain of west-southwestern Slovenia, and western Croatia. 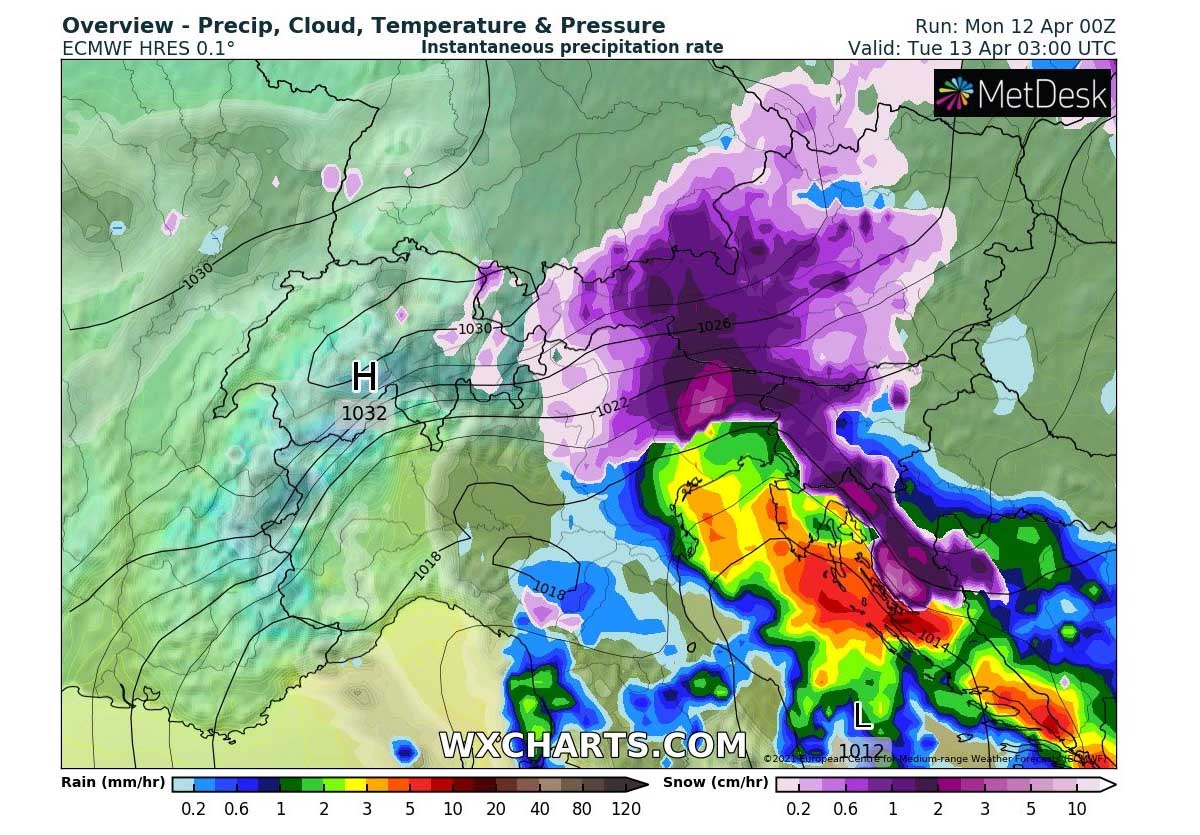 Some minor model differences regarding the exact amount of snow for the Alpine region and especially the northern Balkans exist, but the snowfall will generally begin by early Tuesday morning. While it will be gradually decaying over the Alps as the front progress goes further southeast, snow will intensify over Slovenia and Croatia.

Locally 10-20 cm of snow seems possible along with the Dynaric mountain range in western Balkans, with the highest amounts close to 30 cm of fresh snow from southern Slovenia to western Croatia (e.g. Lika and Gorski Kotar regions). More snow, close to 50 cm, will likely accumulate over the Alps by Tuesday afternoon. 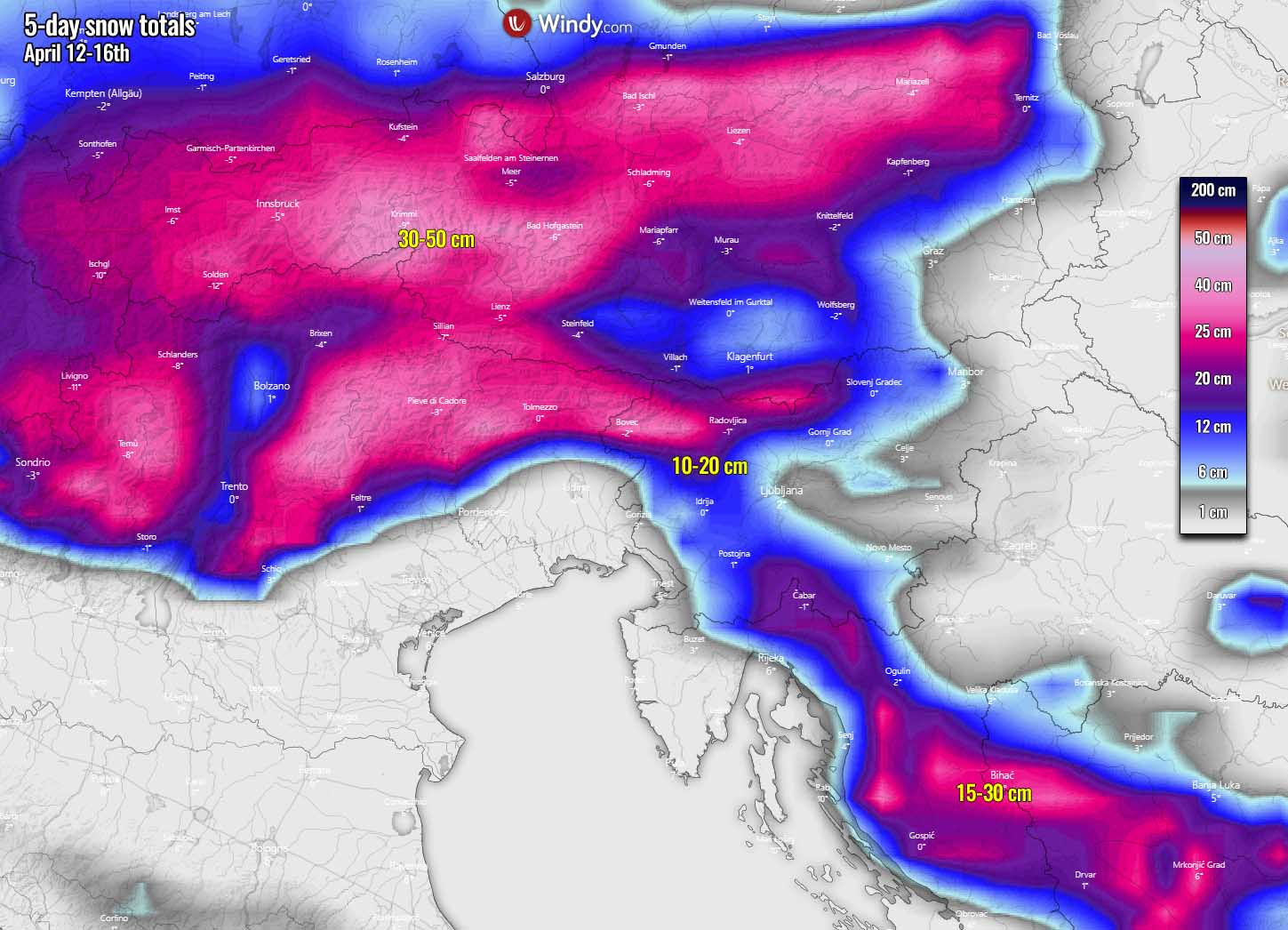 Heavy snow will again likely reach down to very low elevations across Austria, Slovenia, and Croatia. Both strong orographic and frontal lifting will support heavy precipitation with the front. So locally heavy snowfall is expected and could cause travel disruptions again in some areas where highways go across higher elevations.

The general track of the frontal system across the Balkan peninsula will be more towards the east this time, which will introduce a heavy orographic snowfall event also across the High Tatras mountain range, situated between Slovakia and Poland. Huge amounts of snow are likely to develop there as well. 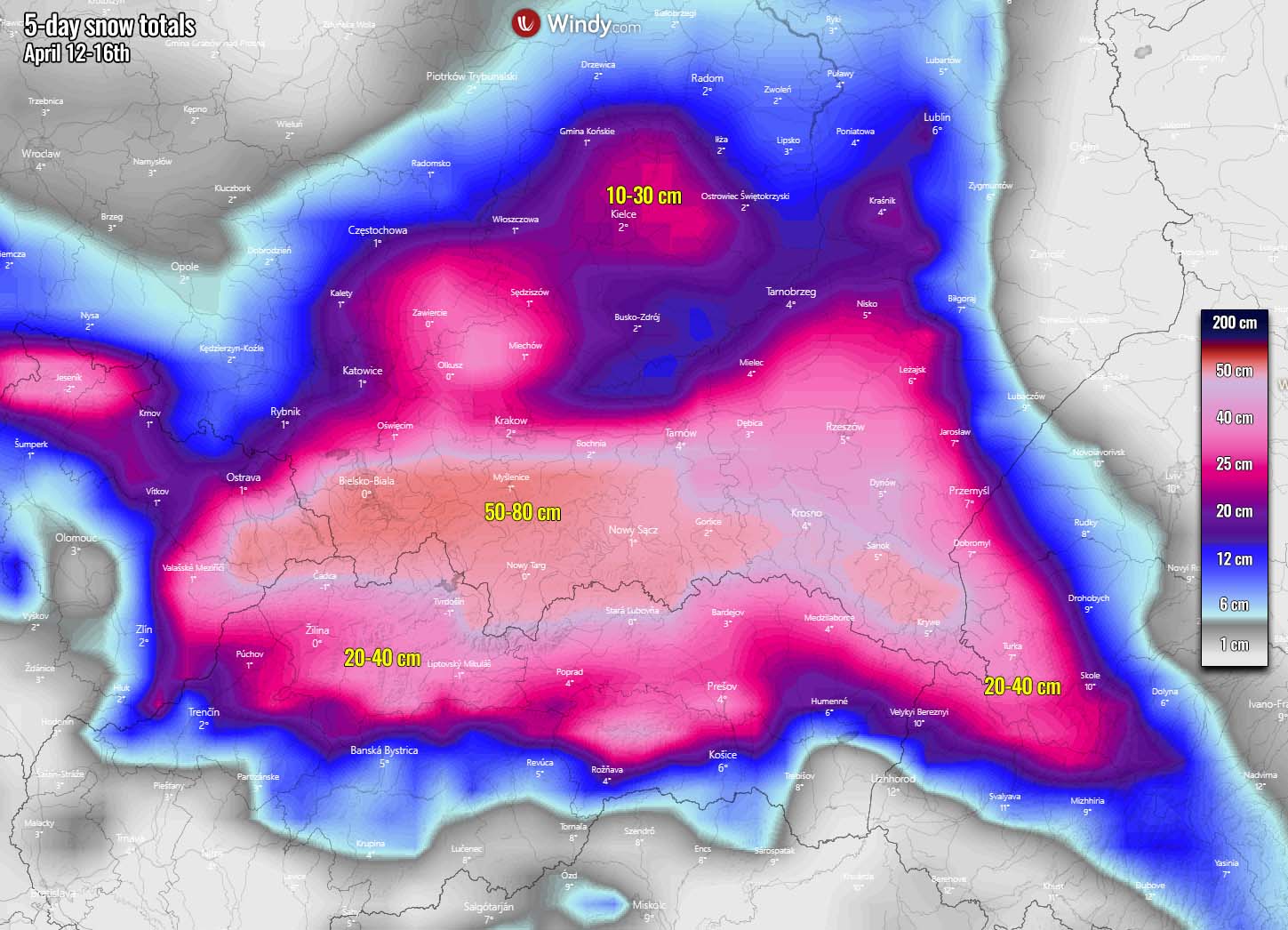 About 20-40 of fresh snow will accumulate across the higher terrain of northeastern Czechia, northern Slovakia, and northwestern Ukraine, with even more snow (generally 50-80 cm) along the northern High Tatras in southern Poland. There, the persistent strong north-northeasterly wind flow in the lowest levels will introduce very heavy orographic snowfall on Tuesday into Wednesday morning.

Some heavy snow will also develop along with the Dynaric mountain range further south across the Balkans on Tuesday, but as the frontal systems travel east, it will not be a significant amount of snow as has happened last week. However, portions of western Bosnia might still see close to 30 cm of fresh snow by Wednesday morning.

Behind the surface front, the cold air mass will continue spreading south across central Europe, the Balkans, and the Mediterranean on Tuesday into Wednesday and Thursday. The air mass in the lowest levels of the atmosphere will be 6-10 °C colder than average for mid-April.

ADDITIONAL DAMAGING FROST IS LIKELY IN SOME PARTS OF EUROPE

As sad as it sounds, we are likely to experience additional frost after already badly damaged vegetation last week. Usually, during these spring months cold air mass intrusion over the continent, the worst follows in the days after the snow or strong cold front. The general model consensus calls for a large and quite deep cold pool associated with this cold intrusion that will bring again a high-risk threat to the already blossoming fruit trees and other vegetation in early growing states.

The expansion of the cold pool will be the largest on Wednesday, being the most intense and anomalous over France, the Mediterranean, and central Europe in the morning hours on Wednesday and Thursday. A significant danger of damaging freeze and morning frost is expected to repeat. Attached below are the lowest morning temperatures forecast by the GFS model for Tuesday (left chart) and Wednesday (right chart).

The morning temperatures will be very low for mid-April across western and central Europe from Tuesday through Friday morning. These values are again low enough that the frost will be damaging for the blossoming fruits. For those who have actually left after last weeks’ destructive events over France, Germany, Slovenia, and Croatia for instance. No fresh early spring vegetation could withstand if temperatures will again push close to or even below -5 °C.

Between -1 to -3 °C will spread across the UK, Wales, Ireland, and Scotland, on all days from Tuesday to Friday morning as well. Temperatures will push to -3 to near -5 °C in some parts of France, Benelux, Germany, Czechia, Austria, and across Slovenia, Croatia, and parts of northern and central Italy as well. Attached below are the lowest morning temperatures forecast by the GFS model for Thursday (left chart) and Friday (right chart).

The coldest temperatures will be in the closed Alpine valleys and dolines where temperature inversion will develop. It will not be surprising at all if see temperatures slip close to -10 °C there.

Once the frontal system ejects off the Balkan peninsula to the east, the colder air mass will also reach as far south as Greece and Bulgaria, so below freezing temperatures are also likely there. Locally -3 to -5 °C are quite possible, leading to more frost damage. 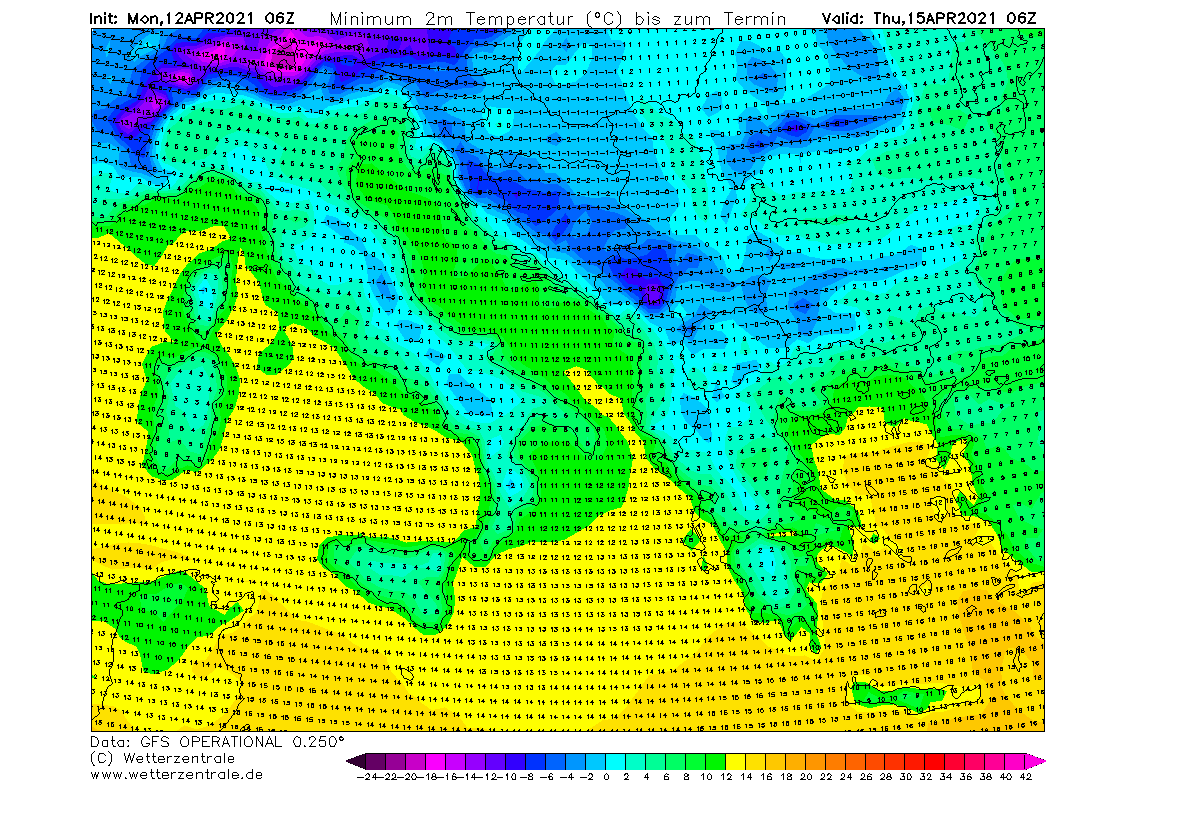 Similar to last week, the general pattern evolution with this cold pool is likely to bring a rather fast weakening of the northerly winds, but strong downslope (Bora) winds along with the Dynaric mountain range. Once the winds calm down and the sky clears over the nights ahead, conditions will become near-ideal for more damaging freeze and morning frost to vegetation and flowering trees.

***The images used in this article were provided by Wxcharts, Meteociel, and Windy.

Another significant pattern change across the United States with a massive cold blast this week, spring snow for Dakotas and the Rockies

Grimsvotn volcano is on a yellow alert, with a nasty explosive attitude and a history of large ash clouds impacting the North Atlantic